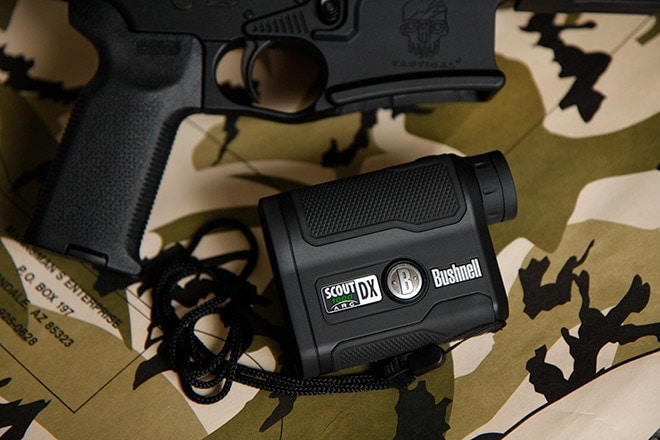 Bushnell Scout DX 1000 ARC with hunting AR. Rangefinders are useful tools for hunters learning to judge distances, and fun for everyone else. (Photo: James Marion)

There are a many things you can do with a rangefinder. New shooters are probably first going to want to see how far the shot they just made was. More sophisticated shooters will consider how far the shot they are about to make is and if they need to make adjustments to their aim. The really smart ones will ask, can I make this shot, given the range? And the genius shooters will have already used a rangefinder to determine and memorize the range to everything they can see and what they have to do to make the shot count.

The most common rangefinders we can buy today use lasers. In the grim past, we had optical rangefinders which were difficult to use and frighteningly expensive. Today, you can get the laser variety for under $100. As with everything, more money will get you more and hopefully better features and, if you want, you can still spend scary amounts on a rangefinder. What you get with the extra bucks is faster results, sharper optics (you have to see through the thing and aim it) and greater range. You also can get some more computing power that will provide corrections for shooting up or down hill and for the ballistics of the cartridge you are using. 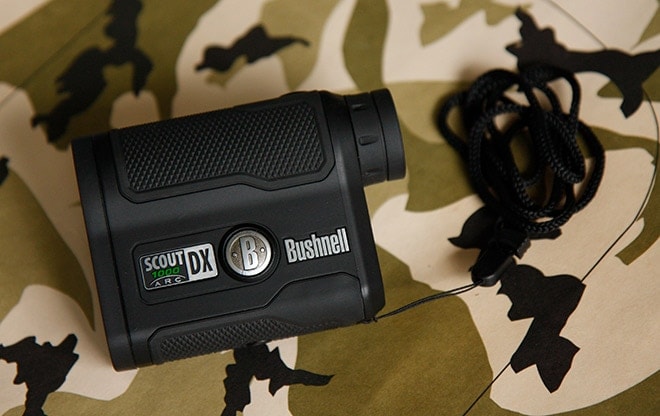 I wanted to review a rangefinder and as I was casting about for one, I narrowed in on the $200 to $300 range. This looked like a sweet spot for price versus features. Most of these units are compact monocular devices that can fit in a jacket or cargo pants pocket. Most have four to six power magnification which is useful for general viewing and enough power to aim the rangefinder accurately. They can generally range objects from 600 to 1,000 yards, though they can’t do it with all targets. Reflective targets work better than dull targets like the animals we are trying to hunt.

The one I wound up with is the Bushnell Scout DX 1000 ARC. ARC stands for Angle Range Compensation, Bushnell’s scheme for dealing with the up and down angle of the shot. It is designed for hunters  — it has rifle and bow modes and can be set for 100, 200 and 300 yard zeroes for rifle. It can compute holdover for 2,000 different loads.

Bushnell claims it will range a reflective target at 1,000 yards, trees to 650 yards and a deer at 325 yards. It has a 6x21mm monocular for viewing and aiming, weighs 6.6 ounces and takes up 4x3x1.25 inches of space. There is a Cordura like case, neck strap and CR2 battery included in the box along with a cloth to clean the lens and instructions. The ABS case has enough non-slip surfaces to hold it securely and there is a tripod socket if you want to get steady. Two buttons access all of the features. They say it is waterproof.

You see a number of things in the viewfinder that tell you the mode it is in, remaining battery life, a reticle to aim with, range to your target, the holdover or angle, which ballistic setting you are using and what unit of measurement it is set to. Depending on how you have it set, you will see different data.

The biggest problem I had was figuring out which settings I wanted to use and that, horrors, involved study of the instruction manual. Since I don’t do archery, and I wanted the ballistic help the unit can give, I set it to rifle mode. I’m not metric, so I set everything thing to yards and inches. I could have used meters, centimeters or mils if I were so inclined.

The next bit was where I had to do the most thinking. First, I had to consider where the rifle I was using is zeroed. That’s usually 200 yards, so I then looked up the ballistics tables on the Bushnell’s site and followed the links to the round I use. It wasn’t there, so I did some cross matching with the Federal tables their website to be sure I was making a good match for the .223 MSR load I use. 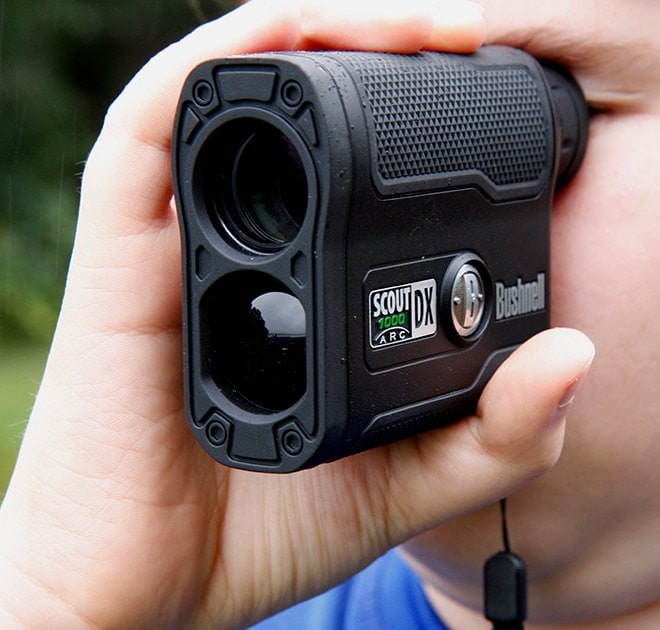 I was able to get readings of objects out to between 300 and 400 yards. (Photo: James Marion)

Next, I had to fuddle through the target mode settings. There are three, standard with scan, bullseye and brush. The basic idea seems to be that the rangefinder may pick up more than one object and the bullseye mode will choose the closer object. The brush mode will ignore things like tree branches and focus on the farther object. The standard mode with scan allows you to move from object to object getting the range to each.

I didn’t range anything as far as 1,000 yards, but I was able to get readings out to 300 to 400 yards on brush and trees without problem. I also ranged vultures at 70 yards as they flew. The readings out to 100 yards were accurate — I didn’t measure any that were longer. Bushnell claims ½ yard accuracy and I found nothing to dispute that.

I was surprised at how well it worked in low light. The biggest problem was seeing the readings in the viewfinder. The optics were quite clear and it was useful for general viewing purposes.

Proof that simple things can help make a product was how much I liked the battery cover with a flip out lever to open it. I didn’t have to find a coin or wrench to change the battery. The original battery lasted through two months of testing and was still going strong. Bushnell recommends removing it when not in use, probably to protect the unit from leaks.

I liked the unit and will probably buy it. I used it a lot to test my own range estimation skills and found it fun to use on walks to see how far we actually went. We used it on a hog hunt to verify that the ranges were within our zero distance. It was easy to carry and convenient to use and has a one year guarantee.