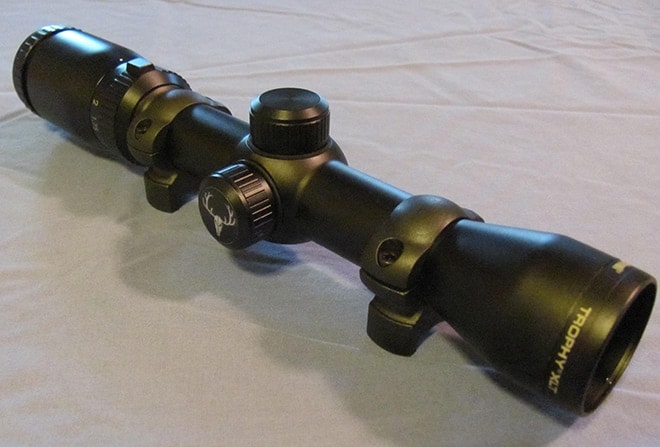 If you want to start a lively debate (read: “fight”) amongst gun enthusiasts, simply bring up the question: “What’s a good introductory optic?” You’ll get a range of answers; guys who insist that anything less than $500 is a waste of money, people who think that the scope they put together using their mom’s old reading glasses and duct tape will do the trick, and all types of stuff in-between. People looking for a first optic are often led towards value-oriented purchases by gun store clerks who know that these are an easier sell than a higher-end choice. But really, how much value is there in a scope that people will end up wanting to replace because it’s not clear enough, lacks features, or has more problematic issues like that it doesn’t hold zero? 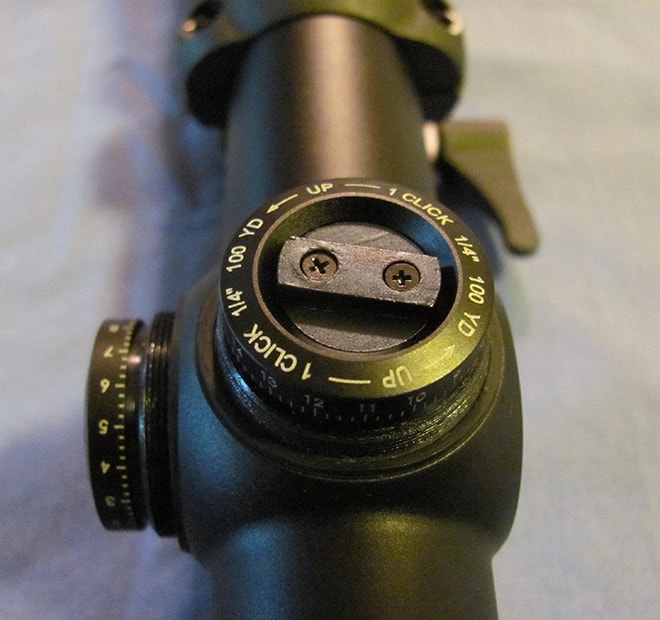 Almost everybody has owned a Bushnell optic of some kind at some point in their life; a rangefinder, binoculars, scope, whatever. The quality of Bushnell is usually perceived as being somewhere in the middle; reasonably good, but not fancy. A working-man’s optics. The Trophy XLT is a synthesis of the “introductory” price point and features with Bushnell quality. The results for the money are decidedly mediocre.

The Trophy XLT is marketed as shotgun scope with an MSRP of $120. For this price, it offers a pretty good combination of features that makes it attractive at the “introductory” point. The XLT is a fairly compact package at 10.6” long and weighing in at three-quarters of a pound. It has a zoom range of 1.75-4x with an objective lens of 32mm, and a 1 inch tube. This all comes in a box with instructions and the obligatory silicone cleaning rag. 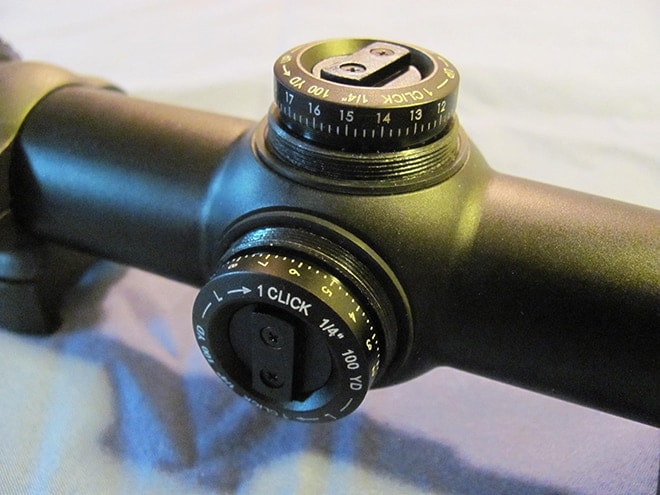 The XLT’s controls are basic. Capped dials for adjusting windage and elevation adjust to ¼ MOA and screw into place tightly. The caps have Bushnell’s Trophy Hunter skull logo on them, which is a nice touch. The dials can be used without tools quite easily. Turning the dials doesn’t provide much tactile feedback but it’s not rocket science to adjust.

To adjust your zoom, the Trophy Hunter’s lens is controlled by a rotary knob just ahead of the sight lens, with a small dot signifying the zoom factor. A small boxy protrusion helps you get a hold of the dial and there’s limited serration, but I didn’t find this feature to be much help in turning it. The surface and finish of the scope itself is smooth and slick and this ends up being reflected on the controls as well. 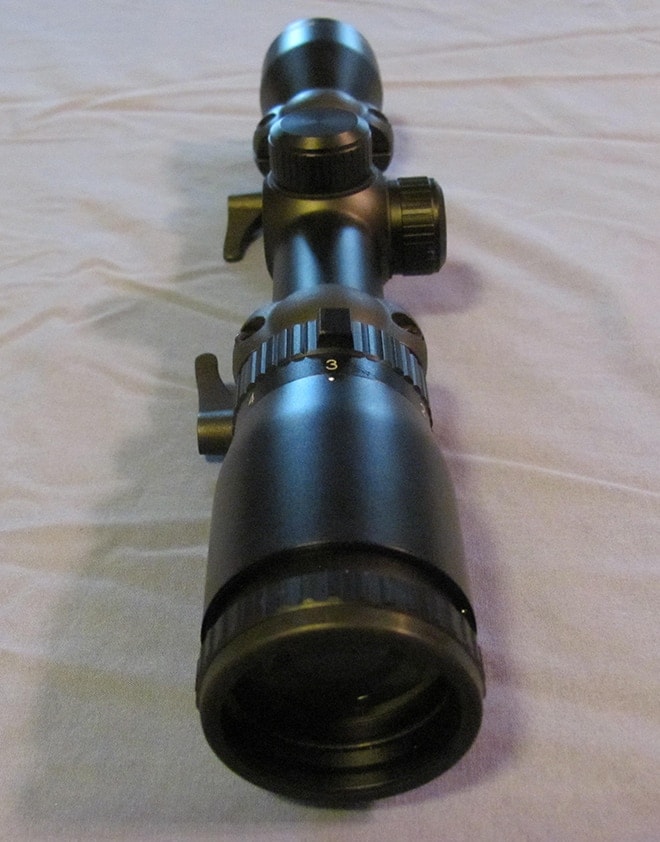 Through the glass, the XLT has a basic duplex reticle with a secondary circle around the crosshair. The crosshair is a reddish/orange colour instead of a flat black.

The finish of the scope is a matte black with a Realtree finish available. It has a low glare and is quite smooth, which helps keep the scope clean. It’s easy to brush off dirt, mud and bits of debris. The finish is also pretty robust and has held up well to all kinds of use without looking any worse for the wear.

I initially attached this to a Ruger 10/22 for basic testing, thinking that as an ‘introductory’ optic, the 10/22 represents a fine ‘introductory’ gun to pair with it. Mounting it on the supplied base and using some quick-detach Weaver rings, I put the optic through the paces on this gun for a while before more serious testing later. As of writing I’ve also mounted it on a Savage Hog Hunter in .308 and a Marlin 1894C.

I haven’t put it on a shotgun, despite this being marketed as a ‘shotgun’ scope, for my own good reasons: I like the generous eye relief this scope is supposed to offer and the parallax set at 50 yards works perfectly for my intended use with rimfire and pistol caliber rifles.  I feel I am hardly alone in relegating this style of scope to this kind of work and I don’t feel that using it with rifles somehow detracts from the intended design of the optic.  That still doesn’t mean, however, that this scope wasn’t designed specifically with shotguns in mind. 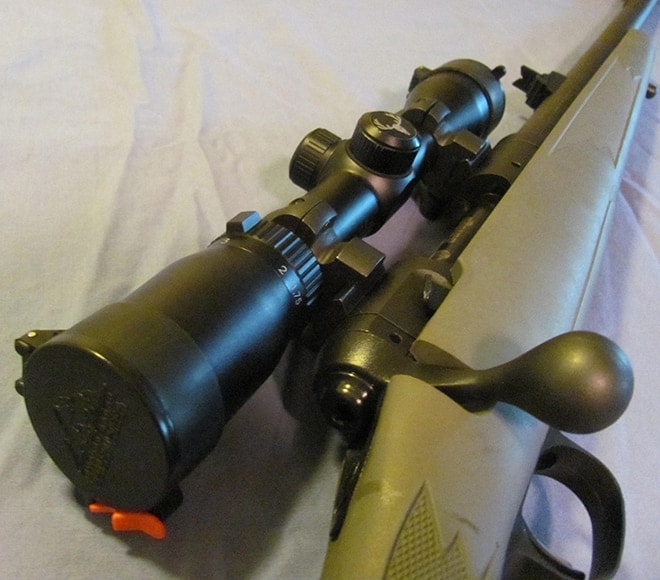 Though marketed as a rifle scope, I mounted my Trophy XLT on rifles because I liked the parallax setting for pistol calibers. (Photo: Andy C)

I’ll lead by saying this is a robust little scope. It’s intended for shotguns so I expected good durability, but in thousands of rounds (granted, many rimfire) and many hours of being trudged about with, this scope has never had a zero wander. It’s certainly reliable enough to take hunting and I totally trust it to put shots on target.

The clarity of the optics aren’t pristine. Granted, for the price point, they are what I’d consider ‘acceptable’. Image quality suffers the higher your zoom is cranked, getting progressively fuzzier. It’s not obnoxious—unlike “inexpensive” optics that look like their objective lens is crafted from Vaseline—but the loss in quality is definitely noticeable.

Since this is intended for shotgun use, I don’t think this is the optic that’s going to help you prove your rifle is 1 MOA. I consider it acceptable for ‘practical’ accuracy, but it’s a far cry from being super-precise.

Speaking of precise shooting, I frequently found myself trying to edge up closer to the lens than felt natural. I thought maybe it was the rifle, but mounting this on other guns has confirmed my biggest criticism—the eye relief just feels too short, certainly less than the advertised 3.5”. Measuring my eye distance from the lens while shooting, I found I got the best image at 4x zoom while about 2.5” away. This is not comfortable, forcing your face to ride way up on the stock. 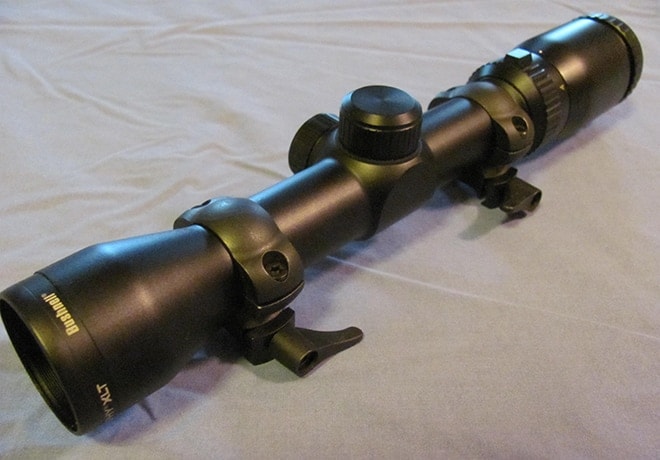 With a price of around $100, the Bushnell Trophy XLT gives the quality you need in a budget scope. (Photo: Andy C)

The reticle is quite good, with the reddish tone helping to stand out a bit against some backgrounds. I can’t recall ever losing it against a background. I like the simplicity and it would be even better with a simple, thin crosshair in my opinion, but the current reticle profile is very usable and clean.

In terms of aiding the shooter, I found the scope wouldn’t hinder my accuracy but it didn’t help tighten my groups much, either. Compared to iron sights, the differences were nominal, shrinking groups off the bench a bit but not much. In the field, I have to say I was more confident shooting at targets farther off, but this left me using the scope at 3x magnification almost all the time. I have to admit I started thinking about fixed-power scopes after a while. I also found the eye relief issue to be a bit bothersome, slowing my aim down more than I’d like.

If you want an optic on a budget, the Trophy XLT is a decent option. At this price ($100-150), it does pretty much everything adequately. In particular, as a close-range hunting scope, I rather like this optic, but for recreational use at the range it may be too limited for even a casual plinker’s liking. My biggest complaint is the eye relief—other than that, it’s a tough, functional piece of equipment that can help you get the job done. If you don’t need a lot of magnification and want something compact and robust, you could do a lot worse.