This review is way overdue.  I’d been hearing good things about Button Sling, so I contacted them last fall to arrange for a review.  They generously sent out a button and a sling for almost every gun I had scheduled for review.  But this was right before the big run on all-things-tactical.  The guns I’d had scheduled to review didn’t show up and I was left with a pile of buttons and slings.  No guns.

We did have a Kel-Tec KSG in, so we hooked it up.  The results were close to serendipitous.  The KSG was built for a single point sling.  Anything in the bullpup length hangs perfectly.  But it only made me want to try the single point philosophy out on everything. 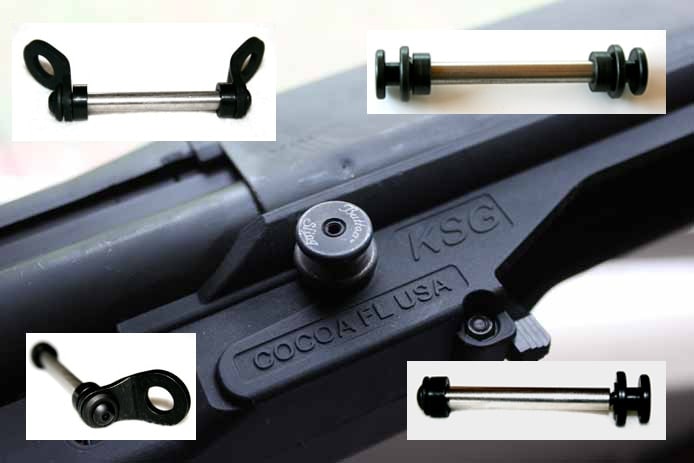 Well we’re back in business.  Enfield has sent us a carbine length MERC415, and Remington finally shipped us an 870 decked out in Magpul furniture.  Those reviews will be showing up on the site, soon.  But first, we’re going back to the slings.  The Button Slings.

There are three main types of Button Sling tactical rifle sling mounts.  One replaces the end-plate.  Another, the two-piece, is ambidextrous and easy to bolt on.  It slips over the buffer tube and can be cinched down with Allen screws.  They even make a more traditional loop mount for use with a hook clasp sling.

As for the slings themselves, Button Sling offers a number of options.  The clasps are a good place to start.  A button is useless without a buttonhole.  The Megalatch is a mil-spec steel buttonhole with a spring-loaded gate for added security.  It is easy to attach, and is my preferred clasp.

They also make a hard plastic clasp that’s even easier to use.  While it doesn’t seem as bombproof as the Megalatch, the “High Impact Plastic Tab” hasn’t ever let us down.  It is made of a nylon that flexes enough to keep from being brittle, but not enough to lose its hold on the button.

You can chose a variety of tactically minded colors and configurations.  Short “Bungee Breachers” that hook onto vests and plate carriers.  Longer “Throw and Go” bungees will go over your head and around an arm.  The stretch keeps things from getting bound up.  Even a short vest bungee will allow for an AR to be fired from either shoulder.

The single point sling is liberating.  There is a balance point, though, beyond which you really need two points of attachment.  The KSG or short barreled rifles just may be the perfect candidates for a Button Sling.  But a carbine length AR-15 works fine with one point.  As does a full-sized tactical shotgun, like the Remington 870, or the Mossberg 590.

With an AR-15, especially, you can adjust the length of the sling so the grip of the gun is at your waist, in the same position you would normally find a strong side pistol.  And there’s no holster to clear.  It is almost as fast to pull up an AR as it is to draw a handgun.

I find that the shotgun takes a bit more time.  Part of this has to do with the increase in weight.  The other part has to do with the angle of the grip.  A pistol and an AR (hanging down) have their grips in the same position.  A shotgun requires a bent wrist to grip.  We had slings on two 870s at the range when we were shooting the video for this review.  The ATI Talon T2 stock (with its pistol grip) was easier to get on target than the Magpul 870.  But I’m really splitting hairs.  Both work incredibly well.

Most of the shotgun sling attachments take the place of a retaining pin.  This is easier than it sounds.  Punch a pin out, slide a new pin (with a button) back in.  It takes a few seconds.  And if the gun has an external shell rack, Button Sling makes an extended pin that will clear that distance.

The Button Sling attachments all seem to hit that sweet spot on the gun for balance and function.  They are far enough forward that the gun pivots perfectly, yet not so far forward that the sling will interfere with the gun’s controls.  Yet even when you shoulder a gun, the sling doesn’t have so much slack that it will interfere with your grip.  The bungee takes up the slack.

It is an ingenious system.  I’ve been incredibly pleased with the way they Button Slings have worked.  Since these arrived last winter, we’ve had them on a number of guns, and have beat the hell out of them.  If anything, they look a little better with some honest wear.

There are other single point slings on the market.  The most obvious competition for the Button Sling is the rise of the QD mount.  And I’d have to run a side-by-side stress test to see which was stronger before I’d declare either a winner.  Or it could come down to cost.   The Button Sling buttons and pins start off under $20.  The slings start at $25.  That’s insane.  They’re made stateside.  What more could you want?