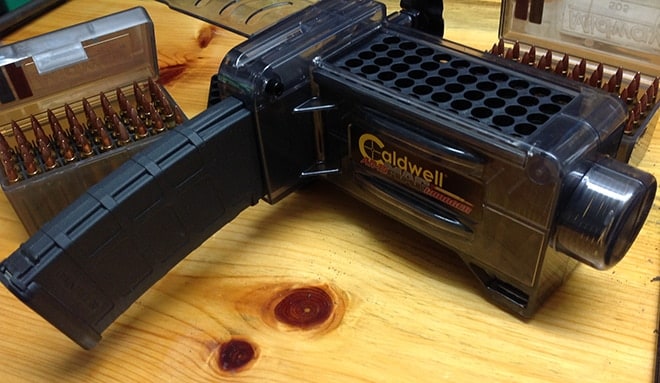 The Caldwell Mag Charger was introduced at the 2014 Shot Show, but is just now becoming widely recognized in shooting circles.   The growing popularity of high-capacity magazine speed loading devices is turning mag loading into more joy than chore and anything that leaves more time for shooting has got to be good, right?

The Caldwell AR Mag Charger accepts 50 rounds of .223, 5.56, or .204 ammunition and is advertised to be compatible with pretty much any magazine on the market.  How does it work?  It is built to be compatible with both standard factory ammunition packaging and common plastic reload boxes, meaning users can dump a full box of 50 rounds directly into the Mag Charger’s slots.  With a magazine locked into the charging port, five rounds are loaded with each plunge of the handle, actuating the spring-loaded ammo carrier.  The device then auto-advances to the next five.  So theoretically, shooters can fill a mag as fast as they can cycle the plunger.

Caldwell advertises that “the entire process of filling the Mag Charger with ammo and loading all 50 rounds into two magazines takes less than 15 seconds.”  Or “load 30 rounds of ammo from the box to the magazine in 10 seconds.” An Ammo Transfer Tray is included to invert ammo that is positioned in boxes with the bullet tips oriented down or to stage bulk ammo for loading into the Caldwell Mag Charger. 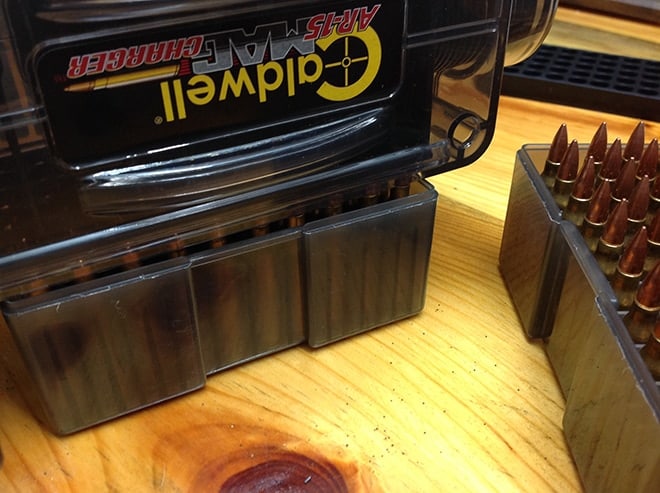 Though retail price rings the bells at $89.99, the device is quickly found online in the $50 range.  Battenfeld Technologies, parent company of not only Caldwell but also Wheeler Engineering, Tipton, and Frankford Arsenal—to name just a few—is dedicated to meeting every need of modern shooters, so product support is ample.

The device is built out of what Caldwell calls a “durable polycarbonate.” Though the Charger is lightweight and has the usual plastic feel, it has withstood rigorous testing both on the loading bench an afield. 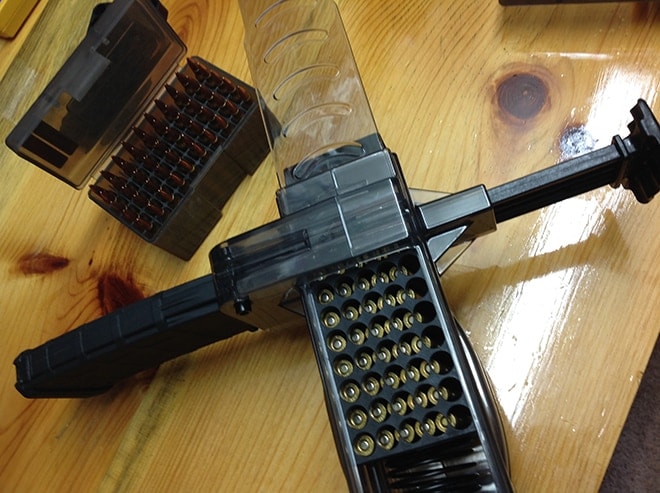 Just as short-stroking a pump shotgun causes failures to feed or eject, running the Charger gently does not load magazines.  In fact, if you try to baby the device, it will jam.  However, with just a little practice, this device is a snap.  It took me two 30-round magazines and about 10 minutes of reading the directions to perfect the technique.  I’d recommend any potential users watch Caldwell’s demonstration video, as it makes the learning curve even shorter. 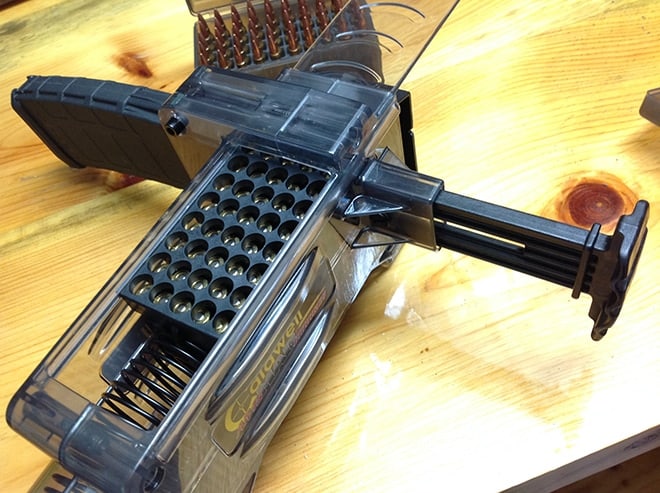 We tested the AR Mag Charger with every brand and build of magazine we could find.  Molded polymer and mil-spec steel, brand-name and knock off, 30-rounders and low capacity—every one locked firmly into the loading port and filling was a breeze.  We even loaded an off-brand drum mag without a hitch.  Several friends borrowed the AR Mag Charger as well, and the results were all the same.  Easy to use. Durable.  The only question mark comes on cost, and that’s best answered by the shooting needs of individual users. 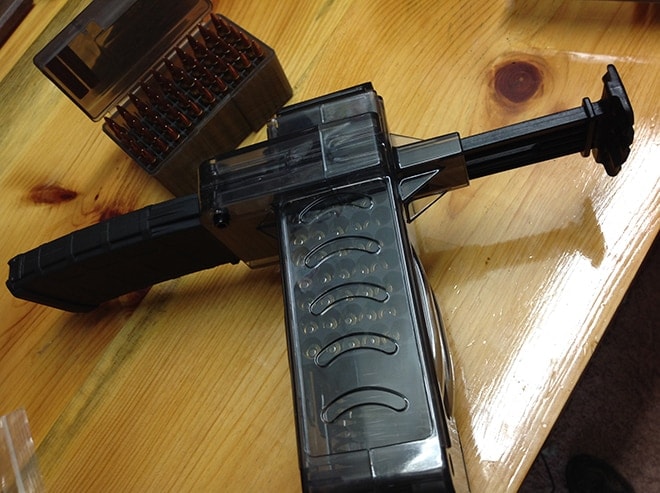 I’ve found the Caldwell AR Mag Charger very convenient to use at home prior to a long day on the range. It measures roughly 9”x6”x4” and though it fits in a shooting bag, it’s on the bulky side for carrying around.  However, that’s a trade-off I’m happy to make. What used to take upwards of an hour and cause sore fingers from loading AR mags, I now easily accomplish in minutes.  In fact, my shooting buds and I are looking forward to taking it out west on the next prairie dog hunt.  Anything that equals more trigger time and less mag loading while dogs pop up is a big win in my book—and more than justifies the cost.  The AR Mag Charger, in fact, was awarded the NRA’s 2015 Golden Bullseye Award for best accessory of the year. 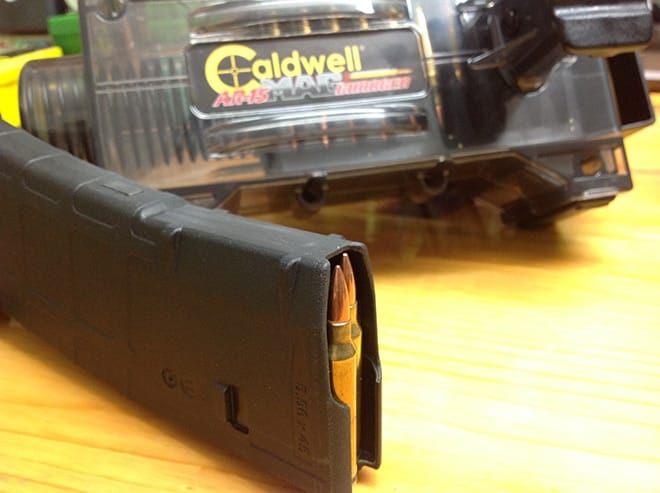 The bottom line is pretty simple.  The Caldwell AR Mag Charge is a relatively simple design built for a simple purpose and it does its job.  If you’re a high volume shooter, or simply dislike the task of handloading mags, the device is more than worth the cost.  It is one of the slickest speed loaders of any caliber on the market today. In fact, they debuted an AK Mag Charger for 7.62×39 ammunition at the 2015 SHOT Show.  The only downfall to Caldwell’s Mag Chargers?  They make it a heck of a lot easier to blow through more rounds than usual on the range.  Then again, maybe that’s not a downfall. You decide.