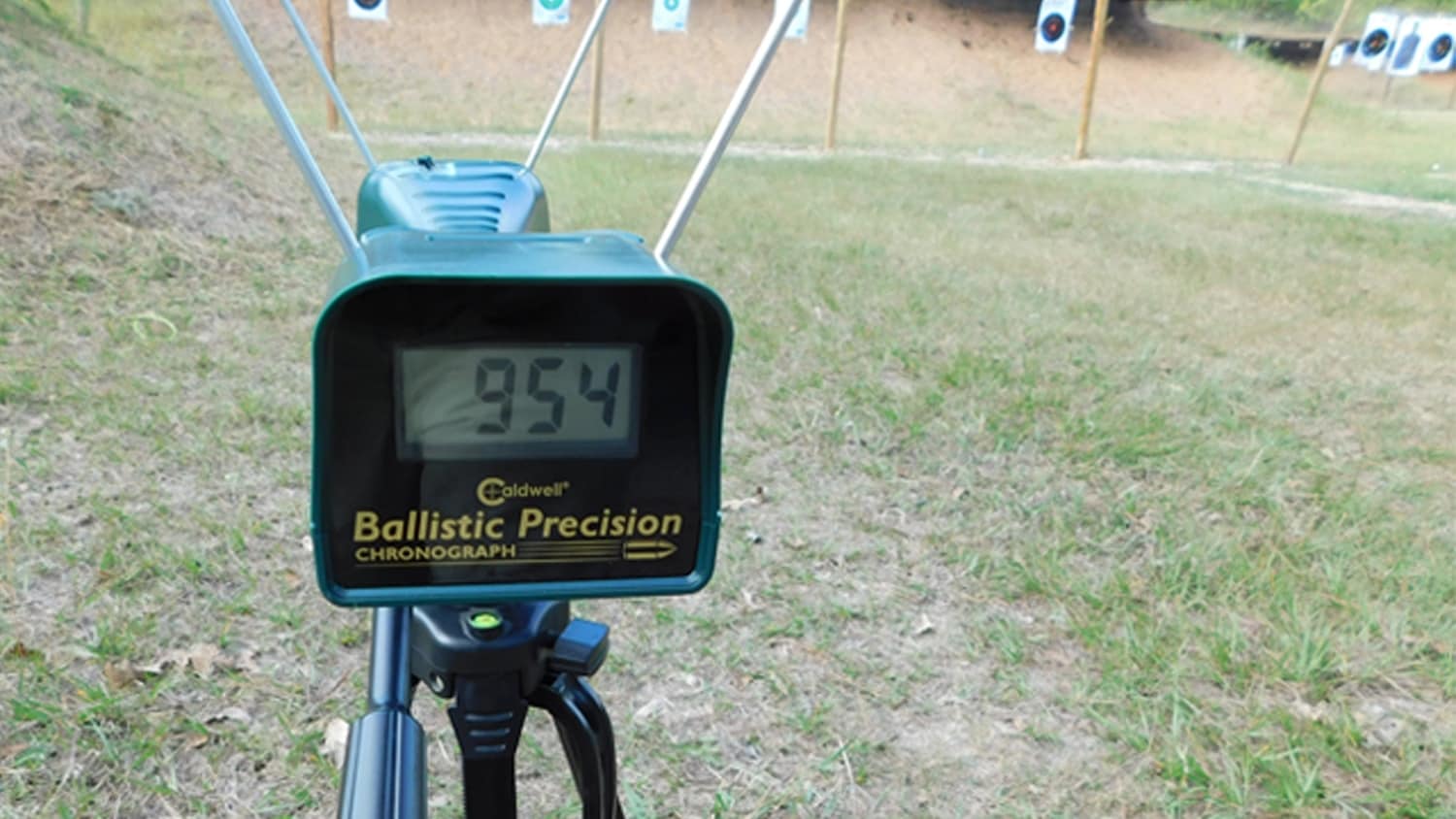 When it comes to firearms, you usually get what you pay for. On occasion, if there is a quality entry into the market at a fair price, it will sell like wildfire. SCCY double-stack pistols, for example, have gotten popular over the last several years. They’re far better made for not much more money than the infamous, yet ubiquitous Hi-Point.

When it comes to gear, the same rules apply. Some optics are better than others, but sometimes a step up from the bottom-shelf stuff can give you much greater advantage with some comparisons to high end products. But when it comes to firearm data collection, chronographs are tricky. Any such item can be hard to come by and quality varies from item-to-item. A year ago, I took a chance on the least expensive chrono I could find: the Caldwell Ballistic Precision Chronograph.

Let’s back up a second. If you didn’t know, a chronograph measures the speed of a projectile, usually by using sunlight and a pair of shaded poles a certain distance from one another to calculate velocity. Why might that be important? Velocity, or speed, of a projectile helps calculate things like power, accuracy and ballistic drop. That information is especially useful for people who reload ammo.

Plus, even if you like to use factory ammunition, it is nice to know the real-world applications of the round. The indicated ballistics that you might find on a package of ammunition is usually very optimistic and may vary by brand, barrel length, weather conditions, lot of ammunition, powder charge, ect. In my unique case, finding bullet speed is useful in guns that don’t take fixed ammunition, especially muzzleloaders — and assigning modern power levels to such guns.

Chronographs can run hundreds of dollars, but the Caldwell Chrony lists for $79 at some big box retailers. Was I worried because it was so cheap? Yes. But Caldwell is known for other shooting accessories and its chronograph consistently comes in at and around the $100 mark. Pricewise, that’s unbeatable. 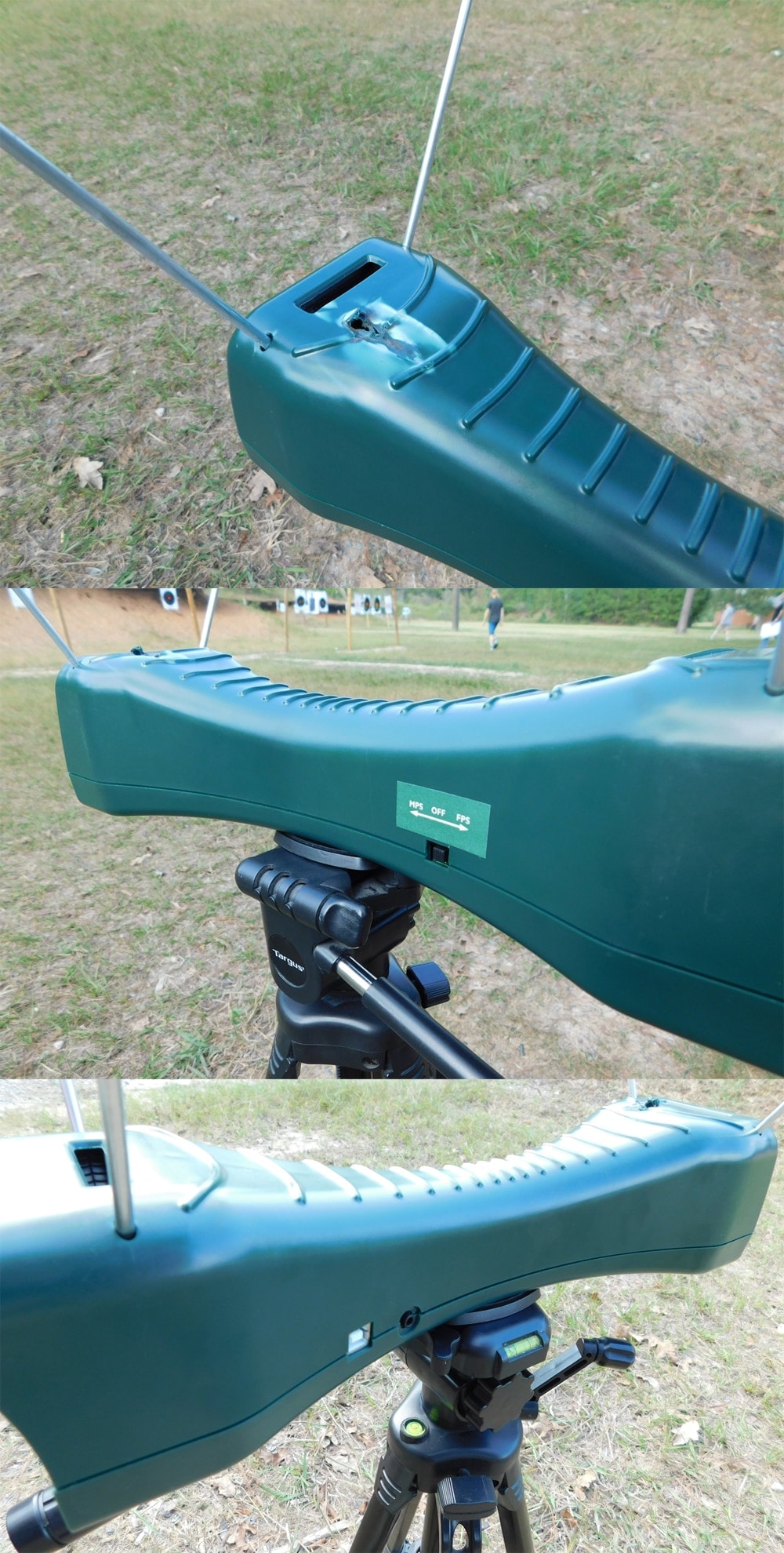 The device operates with a single flip of the switch. (Photo: Terril James Herbert)

Once I got the packaging open, I found the mechanism very easy to put together. You get four aluminum rods, two white plastic shades, a 15-foot power cord and the dark-green chronograph unit itself. The package includes a black carrying bag for storage and transport, which isn’t difficult considering the unit and every other part collapses to a 4×15 inch package. The unit itself runs on a 9v battery, with enough storage in the battery hatch for a spare.

When I am ready to conduct a string of fire, I screw a tripod base to the bottom of the unit—though that base usually stays on even in storage. The chrono is threaded to accept just about any tripod base and most tripods will work well in the field. I get by with a 48-inch tripod set at maximum level for bench rested shots, while a taller 72-inch tripod works best for offhand work.

But before I get to mounting onto the tripod, I open the battery hatch and make sure the battery is attached to both wire terminals. After closing the battery hatch, I shove each of the aluminum rods into the installation holes on the top of the device. Once they are staked firmly, stretch over the shades and snap them over the rods. I tend to do this after the device is secured to the tripod and afterwards I put the chronograph where it may get the best light, though this unit will work well in partly cloudy weather.

Flip the black switch on the left side from “off” to either meters per second or feet per second. The chronograph will count down and once you get empty brackets in the display, shoot away. But remember to shoot as straight into the brackets as possible. Shooting off at a drastic angle or favoring too far to one side will produce an error message, which is corrected by firing another shot. There are no buttons to reset. There isn’t even a memory capacity on the chronograph to remember the data. You can use the included cord to record data with your phone or computer by plugging it to the jack on the right side of the device, but I only use my camera or a notebook to record strings of shots. It is all on you to collect the data and there are fewer exposed switches to get beat around and eventually fail.

Speaking of failure, I have yet to have this chrono go dead on me. Fed by 9-volt batteries, one could last me a solid month of consistent use, ie one hour per day, three or four times a week. 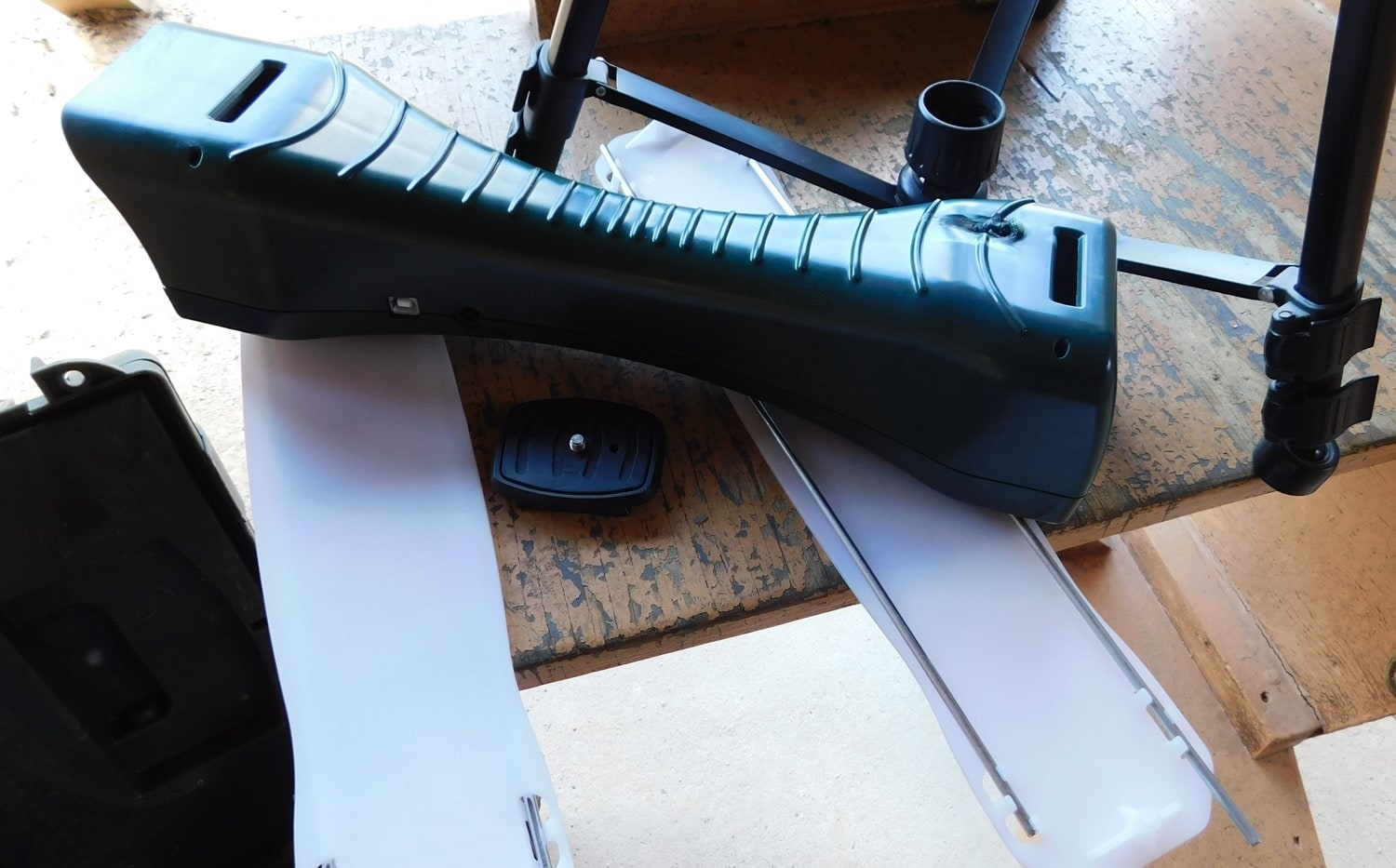 Appearance-wise, the Caldwell is more solid than it looks, though it is mostly made of plastic. It has made it through rain quite well, though that is the worst possible weather for the shades to do their work. The shades are a certain distance apart and measure the shadow of the bullet as it passes through. But in any case, electronics and rain don’t usually bode well. The Caldwell even survived a hit from a Henry .410-shotgun slug fired at close range. It hit the back of the chrony and knocked it over on the tripod. After recovering it, I tried shooting again and I went home that day with all the data I need. And it is still going perfectly.

Take it or leave it?

I admit I’m not to put great emphasis on range gear. It took me a while to get something as “sophisticated” as a chronograph. Does that mean I now join the ranks of rough looking folks who make range day an all-day affair with obscure big-bore rifles and fancy, wooden gear chests at the ready? I don’t know, but my little set up won’t impress anyone who spend the money on a Shooting Chrony.

Though lightweight and easy assemble, the Caldwell Chrony has only a few visible metal components and the controls are pathetic. You get a single on/off switch that can be switched for meters to feet and a jack for using your phone. Battery life and endurance to the rigors of shooting have been excellent. Though the low price made me hesitate for a moment, there is no looking back. Whether you are getting into reloading or into serious data collection about anything and everything, the Caldwell Ballistic Shooting Chronograph gets two thumbs up.