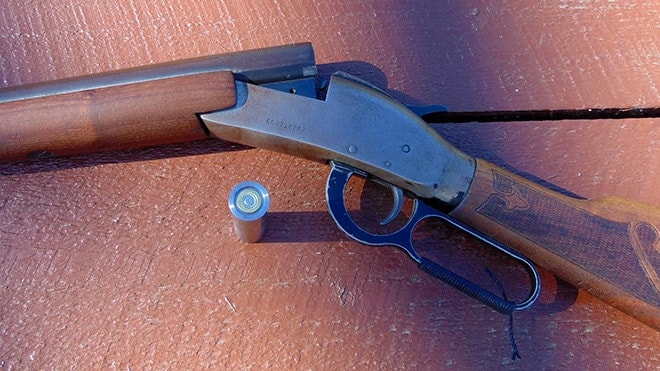 The shotgun is perhaps the most universal and practical weapon in the history of mankind as we know it. No other handheld firearm can be so versatile. With one shotgun, a person can hunt all manner of small game, even big game, and if need be, use it handily for personal defense. It almost seems like firearms Utopia. But it can be even better.

Cartridge adapters are nothing new; they have been around for decades. My first was years ago when I had a vintage Winchester Arms Company made version that allowed me to fire .32 S&W rounds out of my .30-30. As handy as that was, I found that those meant to be used in shotguns are much more useful.

Today several companies make cartridge adapters for shotguns, but I ended up choosing two from ShotgunAdapter.com. Yes, that is the name of the company. They are made in the United States, in Leroy, Michigan. I bought them to go with my Ithaca 66 Super Single 12 gauge single barrel shotgun. The adapters will work in a pump action shotgun, I don’t know how well they would function or extract from a semi-automatic shotgun, but they are right at home in a break open single or double barrel shotgun to be sure. They are 2.75 inches in length so clearance isn’t a problem. 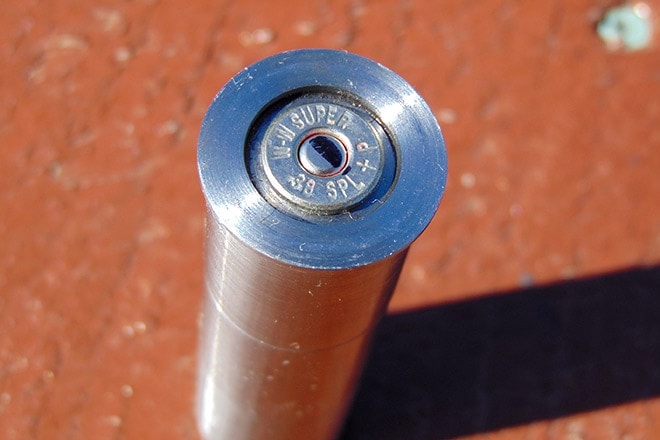 All of the adapters from Shotgun Adapter are smooth bore and they all cost thirty dollars. That’s not a bad price for what you’re getting. These are not meant to take the place of a rifle or handgun as far as accuracy, but I was surprised with the results I got out of them. The first adapter I tried was for .357 Magnum. Most other adapters out there are rated for .38 Special rounds only, but this one is advertised as being able to handle the more powerful stuff. 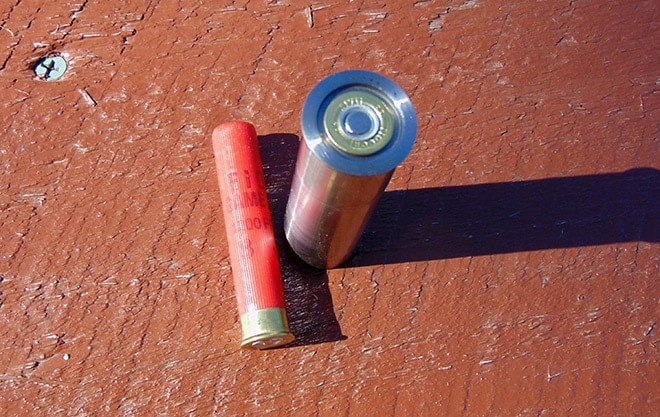 I set up a target with a four inch square to see if I could even get the rounds close to the target. I was pleasantly surprised that when shooting at 20 yards offhand, I was able to get a three round group not only in the target, but with a group of 2.5 inches. I did notice though that the rounds were beginning to keyhole, but this again is from an adapter with no rifling. For personal defense if need be or even small game at close range, this would do the trick.

I fired a few rounds farther out and the bullets began drifting off and the accuracy went downhill, so to 25 yards is where I would limit my shooting with these. Every round was easy to take out of the case, requiring nothing more than my fingernail or a tap of the adapter on the bench and the empty popped right out with no problem. 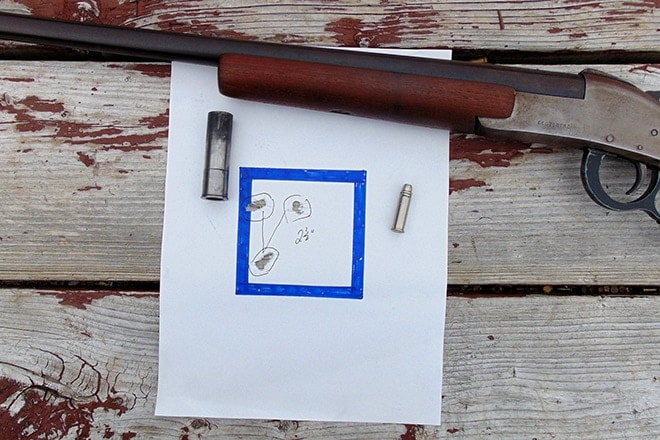 .357 Magnum adapter fired out of an Ithaca Model 66 at 20 yards. Though some keyhole-ing was present, I was still able to produce a 2.75 inch group. (Photo: David LaPell)

Next up was the .410 adapter. I picked this one up for a couple of reasons, one being that my Ithaca Model 66, like a lot of single barrel shotguns in 12 gauge that I have owned over the years, is downright uncomfortable when firing it with even mild loads. The Ithaca 66 has an alloy frame, is very light and has a thin buttplate. I have shot many shotguns over the years, but some of those single barrels were never designed for comfort. I wanted to be able to shoot the gun without it beating me up too much and the .410 would also give me another caliber in case I want to go squirrel hunting with a shotgun without picking too many pellets out of it come supper time.

I took the Ithaca to the range with the .410 adapter and a box of Fiocchi #8 2.5 inch shells. The only drawback to the adapters being 2.75 inches long is that it limits you to the shorter .410 shells. I’ve heard people say that these adapters should be ok with the longer rounds. I didn’t try it and you shouldn’t either — stick to what the company says it can safely handle in length. 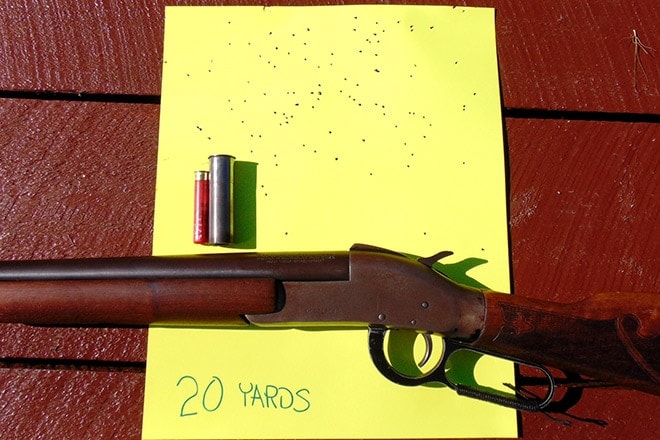 .410 adapter at 20 yards. This pattern busted clays and would easily take squirrels at this distance. (Photo: David LaPell)

I set up a piece of 11×14 inch poster board at 20 yards and let one round fly. The Ithaca has a fixed modified choke and the pellets hit a bit high but it gave excellent coverage. I tried out a few stationary clay targets that I hung up at the same range. Again they were busted with ease. A squirrel or other appropriate sized small game animal could be taken with the .410 adapter in your 12 gauge as long as you pattern it to see if your results are similar to mine. With .410 loads in the Ithaca, recoil was downright pleasant, much more so than any larger rounds. Like the .357, the extraction of the cases is easy with just a fingernail to get a hold of the rim and ignition was flawless.

So what is the real use for these adapters? For one, you can turn your shotgun into an even more versatile weapon for survival, personal defense, etc. But another thing to consider is that many of us trade or sell a handgun, rifle or shotgun at one time or another and end up with extra ammunition lying around with no gun to shoot it out of. I have a few hundred rounds of .38 Special and .357 Magnum on hand with no gun at the moment to use it in — until I bought the adapter. The $30 I spent on the adapter now lets me use up that ammo that was gathering dust, which is much cheaper than buying a new gun. And with adapters out there in everything from .17 HMR to 20 gauge, the options you have are many. 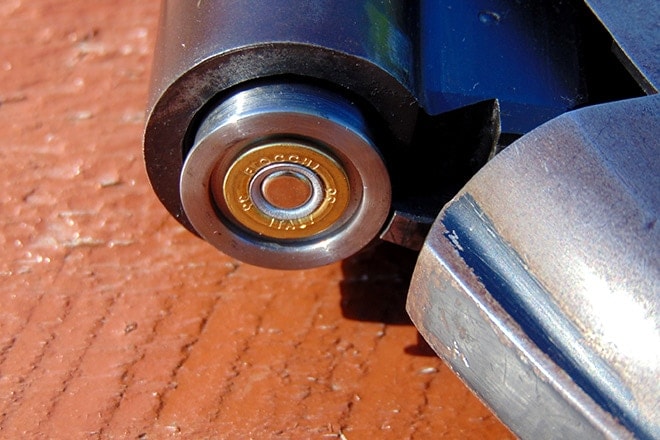 Another reason for adapters like this is for training new or young shooters. Nothing can make a beginner shy away from wanting to shoot like punishing recoil. So if all you have is a 12 or 20 gauge shotgun around and want to start a new shooter off with it, you can get a .410 or even a 28 gauge adapter. That way as they grow and get more experience, you can simply remove the adapter and they can continue to use the same gun that they have been training with all along.

Cartridge adapters also come in handy if say you happen to have inherited Granddad’s old single barrel or double barrel shotgun and you’re worried about shooting it in its present caliber. A .410 or even an adapter for a pistol round would be just the ticket to keeping the old gun going as long as it is mechanically safe.

Adapters for shooting various calibers out of your shotguns open up new avenues of use. Having a few for a survival gun, training new shooters, using up old ammo or all of the above — any of these choices make them much more cost effective than buying a new gun.