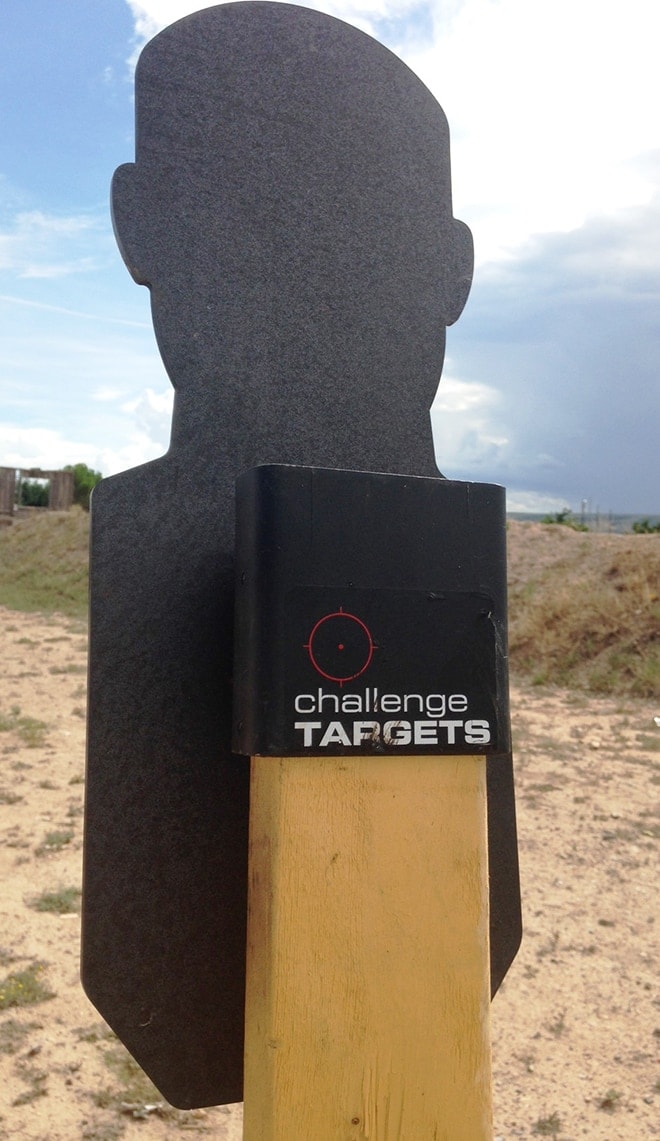 There’s nothing like the instant auditory feedback of rounds on steel.  For about a year now, I’ve been setting Challenge Targets’ steel handgun silhouette up for students, friends and my own practice.  The opinions here are based on experience; Challenge Targets hasn’t been informed about this review—it’s just such a cool chunk of gear that I felt motivated to review it.

The 20-pound set is comprised of four main items:  the head/neck/center of chest silhouette measuring 20 inches long and 8 inches wide and cut from ¼-inch-thick steel, a 13-inch steel ground stake, two mounting brackets to accommodate a user-supplied two-by-four, and wing nuts to hold the wood inside the bottom bracket.

These parts can be carried and stored as a unit or as three pieces.  The setup is thus easy for one person to move, even when also carrying a mallet to pound the stake into the ground.

The stake has an angled piece of iron that serves as a “step” to stomp on and/or pound so that some of its length can be sufficiently buried to support the target.  At my usual range, the ground is nearly always packed and hard.  Even in wind, the target is stable with little more than half the stake buried.  It was surprising when, after a heavy rain at a class held on a different range, the target remained stable with two days’ heavy use in ground so saturated that I didn’t need a mallet to completely sink the stake. 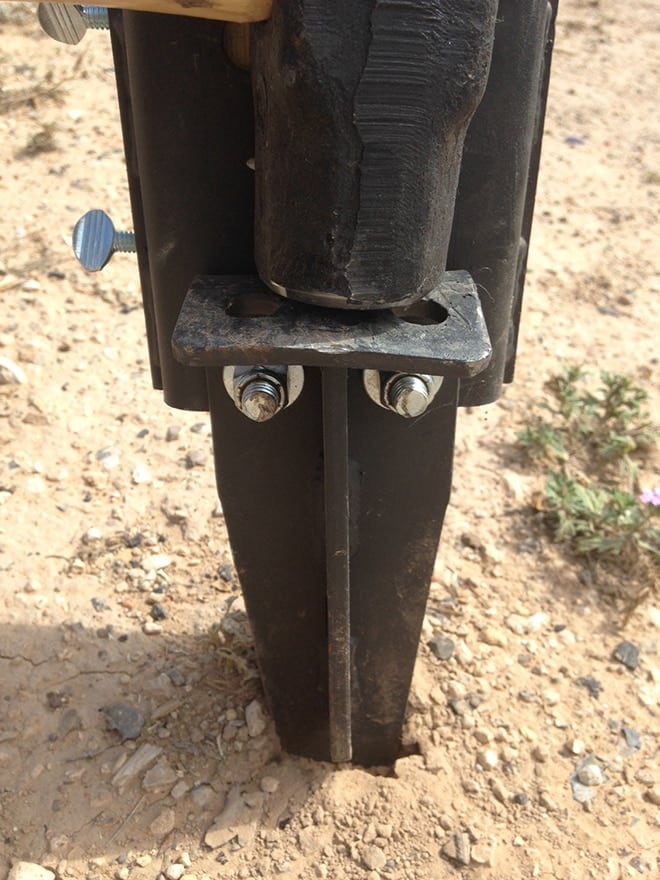 Once mounted, the silhouette hangs naturally, and safely, with a slight downward angle, thus deflecting bullet jacket material down as much as possible.  Anyone who’s experienced subcutaneous insertion of those little boogers will appreciate this.  (I have not experienced fragment cuts, by the way, that were the result of my own target-setting.  More on steel target safety later).

The target’s size is appropriate for accuracy training of new shooters at closer distances (12 to 20 yards), as the eight-inch width doesn’t allow for any but the smallest right/left deviation. It does accommodate to some degree the common error of trigger-mashing, as the length will, within limits, forgive the resultant low point of impact when the shot is aimed at the head and instead impacts at the neck or chest. 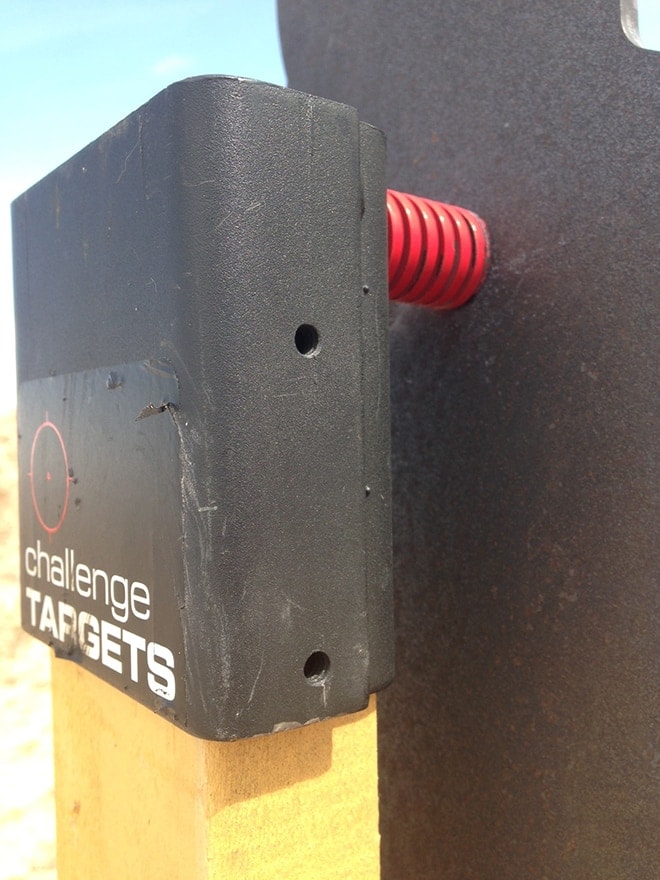 The head plate mount could use some wingnuts but works fine without them. (Photo: Eve Flanigan)

For distance training, the target is also of great value.  Notwithstanding the instant auditory feedback, the same length that aids those still learning trigger control also offers a test of accuracy for shooters wanting to confirm their accuracy at distance. So long as a fresh coat of spray paint covers old hits, the target offers visual confirmation of whether hits are being delivered high or low, even at distance.  So far, my practice on this target has been out to 50 yards, as has that of a couple students.

A word on safety:  This target is rated for handgun practice only. Challenge Targets recommends placing this target a minimum of seven yards (21 feet, you metric types figure that out for yourselves) from the muzzle.

Personally, I will not use or have a student use a steel target closer than 12 yards.  Eye protection should be worn by both the shooter and any bystanders.  While the possibility of a serious injury from a jacket fragment is small, it is also avoidable with these simple precautions.  If for some reason a shooter feels they must be closer to the target, quality frangible ammunition such as Team Never Quit loads, whose developers have tested the ammunition for fragmentation at a range of a couple of inches, will do the job well  (Disclaimer: TNQ dealer Lucky Gunner  supplied me with a few free boxes of 9mm. Their gift doesn’t influence this recommendation; what does is an in-depth discussion that included video and data confirmation of this ammo’s performance, provided by TNQ’s product developer).

This writer has no qualms about giving negative feedback when it’s warranted.  Challenge Targets’ Steel Handgun Target, however, has offered no reason to write anything but praise.  At $179, it’s priced comparably to other steel targets and offers a high level of convenience and fun for training or competition.  Check it out.