Slings are instrumental for guns I expect to field carry. A good sling isn’t necessarily sexy, fascinating or fun, but it is useful. I couldn’t imagine slogging a firearm by hand on some of the hikes I’ve made to hunting spots or camping sites. Once I’m on location, an appropriate sling can also make shooting a much more enjoyable experience.

The key word here: appropriate. Not every sling is great for every gun or purpose. After about a year of use, I’ll be discussing where The Claw Sling from Quake Industries fits into this picture. Hopefully, knowing where it worked, where it hasn’t and why will help you decide if The Claw has a place in your systems. 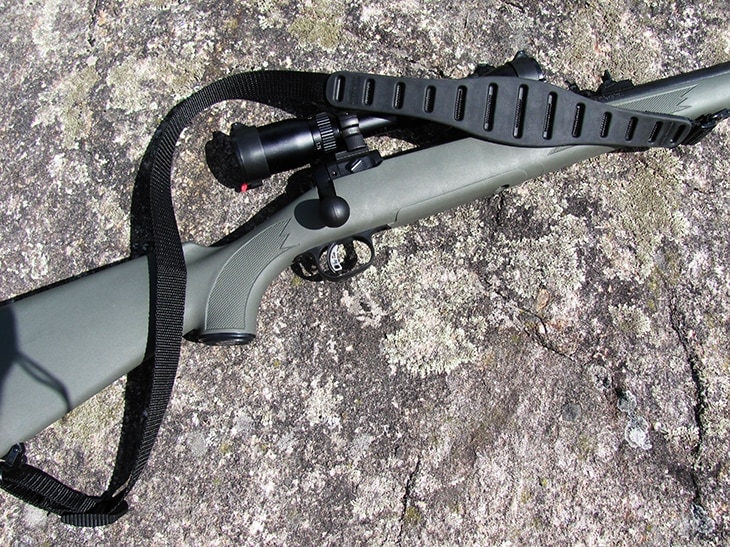 The Claw sling on my favorite rifle. (Photo by Andy C)

The Claw is a traditional two-point sling consisting of a nylon strap with quick-detach swivels on either end. The strap measures in at 1-inch wide and 40-inches long when fully extended and individual user’s can easily adjust the strap to fit them. Near the ‘top’ of the sling is the feature that gives The Claw its namesake, a tapered rubber pad 14-inches long and 2-inches wide, designed to sit comfortably on the user’s shoulder.

The rubber provides The Claw with grip that prevents some of the downward or forward movement associated with the two-point sling slipping when in the over-the-shoulder position.

It’s available in a variety of patterns and colors, including camouflage. I went with the standard black because it goes with just about anything. The Claw retails for $25 and is widely available in brick and mortar stores. 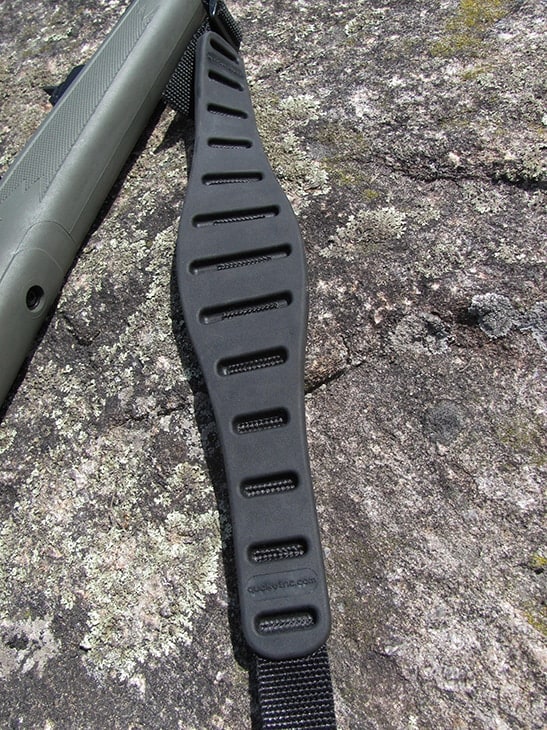 The nylon strap is still undamaged after extensive use in various weather conditions. It has gotten wet, sunbaked and dirty without any problem. I clean it by leaving it submerged in soapy water for a while, then rinse and air-dry it with no adverse effect. The swivels show no signs of wear or bending and are still easy to remove or place on a different gun. For longevity and durability, The Claw gets a big thumbs up.

In practice, The Claw puts in work. The rubber pad provides the sling great purchase on your shoulder and keeps a gun stable. With some slings the gun will constantly be shifting around, forcing you to make minor but annoying adjustments.

At worst, the sling can gradually slide off your shoulder and you might drop the firearm. If this happens with The Claw then you must be on a trampoline or something. It has a sturdy hold and makes carrying a gun comfortable with minimal fuss.

Over my testing time with The Claw I tried it on a few styles of firearms to see where I felt it worked best and which guns would be getting their own Claws permanently assigned to them.

My sling started and finished its test run attached to my Benelli Nova. I carry this shotgun long distances to campsites and hunting spots and The Claw helps out nicely. Additionally, it doesn’t get in the way when the gun is in use as I don’t use the sling to aid in shotgun shooting. For a heavier gun that needs to travel long distances, The Claw is a perfect carry aid.

As far as rifles go, using The Claw is a question of your own shooting techniques. I’m a bit old-school with slings and often use the “hasty sling” technique  in offhand shooting with rifles. It stabilizes my gun. I’ve practiced it enough that I’m comfortable and reasonably quick in establishing the hold. Unfortunately, The Claw’s namesake rubber pad gums this whole process up pretty badly. The rubber tends to adhere to clothing and skin in uncomfortable ways. If you like this technique for offhand shooting, stay away from The Claw.

Regardless, I ended up buying a second Claw to match with my Savage Model 11 Hog Hunter. It’s a stout rifle, weighing in at about 8 1/2 pounds when kitted out. I have to carry it a long way to my preferred hunting and plinking areas and The Claw makes this easy. When shooting a rifle like this, my preference is to use shooting sticks over the handy sling, so that impediment doesn’t come up. Overall, for heavier rifles, I thoroughly approve of The Claw. 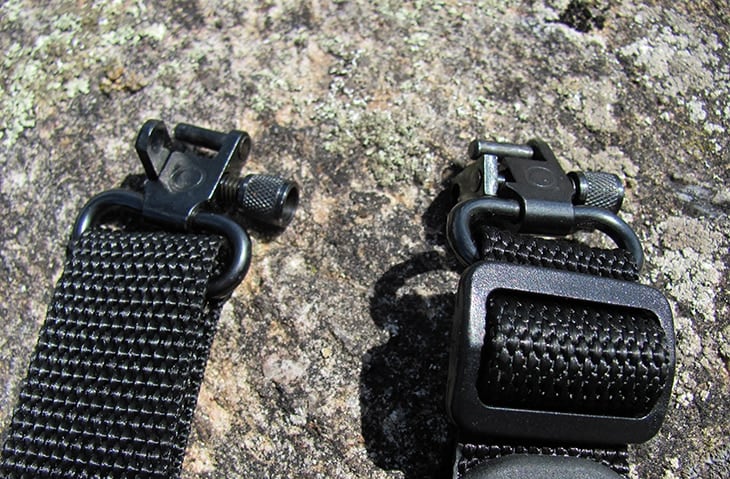 The Claw’s swivels are made of sturdy aluminum. (Photo by Andy C)

On a competition or home-defense firearm, The Claw loses its grip. The single-point sling has gained traction in civilian use for years in these arenas with good reason. They’re more compact and stay out of the way of the user even when the user whips the gun around. The traditional two-point sling running the length of the firearm isn’t a pure liability for these setups, but I feel their potential to get in the way outweighs the benefits.

Weapons with shorter barrels that require fast, fluid and frequent manipulation may see something like The Claw getting in the way of reaching for the charging handle or catching your hand as it returns to the weapon from another task, like opening a door.

Unless you have one of these guns you plan to be carrying for a long time, I’d be more comfortable with a single-point fighting sling. For action shooters in sports like Service Rifle or Three-Gun, the long guns see so little carry time that The Claw is more of a liability.

For a bush gun like my Marlin 1894C, I find the gun is light enough that I don’t need The Claw’s added stability during carry and would prefer a lighter, thinner strap that I can also use as a shooting aid. That said, it still works in this capacity. If I wasn’t the type of guy who bought slings for each gun he owned, I would probably be slapping The Claw on my Marlin whenever it came with me on a hike of some kind.

I don’t see slings as a ‘one-and-done’ affair because different slings match different guns. Like firearms, you don’t purchase one gun expecting it to do everything perfectly. It seems like I listed a lot of places where The Claw doesn’t work well as a sling. But for its primary purpose — helping carry a heavy gun over longer ranges hands-free — it’s amazing. I would buy another without reservation if I needed one. If you think you need a sling for a similar purpose (and I’d suspect most upland shotgun hunters do), don’t hesitate to grab hold of  The Claw.