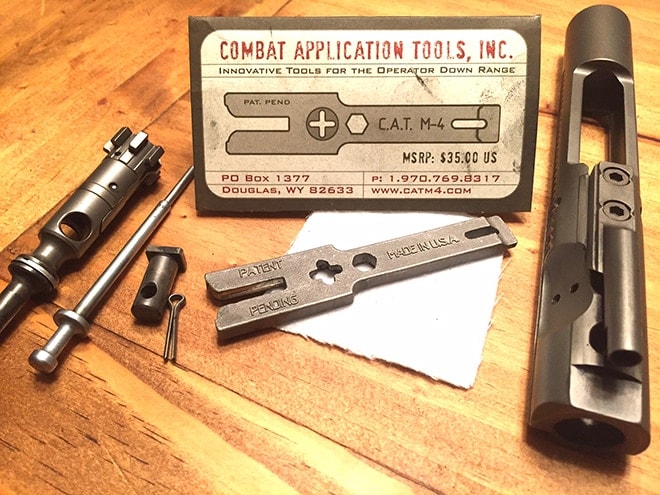 The Combat Application AR-cleaning tool is no longer available on their website, but other outlets still have it. (Photo: Eve Flanigan)

Recently, I ran in a four-mile rifle/pistol event in under a 95-degree west Texas sun.  My feet kicked up powder-fine dirt the entire way.  At least, I thought, I wouldn’t have mud to clean up.  I was wrong in a way, where it came to my poor AR, which took the brunt of dripping sweat and the centuries-old powdered sand all around.  When I uncased back home, there was “mud” on the outside and hard-packed grit – the worst I’ve seen – in and around the bolt carrier group. As I sat at my table cleaning the gunk off, it occurred to me to share the best tool ever for this job.  Enter the Combat Application Tool (CAT). 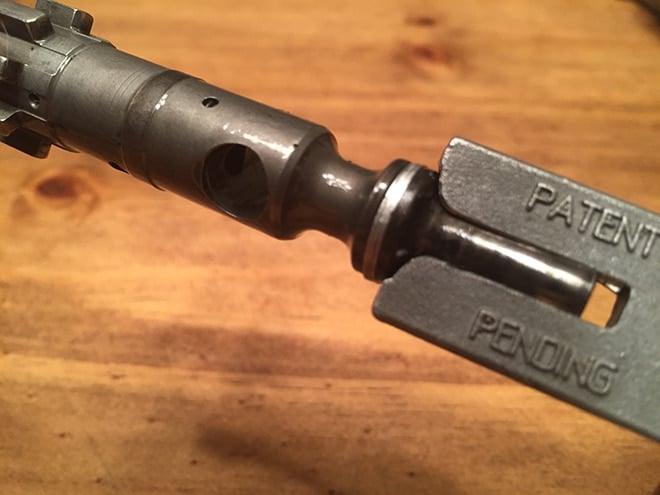 The CAT was originally recommended via an associate whose friend said it was the greatest AR cleaning device ever.  Since that friend has seen more than his share of action in more than one sandbox, I took that recommendation and ordered the then-little known gadget from its developer in Wyoming.

Since then, the little tool has proven itself useful beyond compare in removing carbon build-up from those difficult places and angles on AR innards.  Someone knew what they were doing when they designed this small, but heavy-duty device. 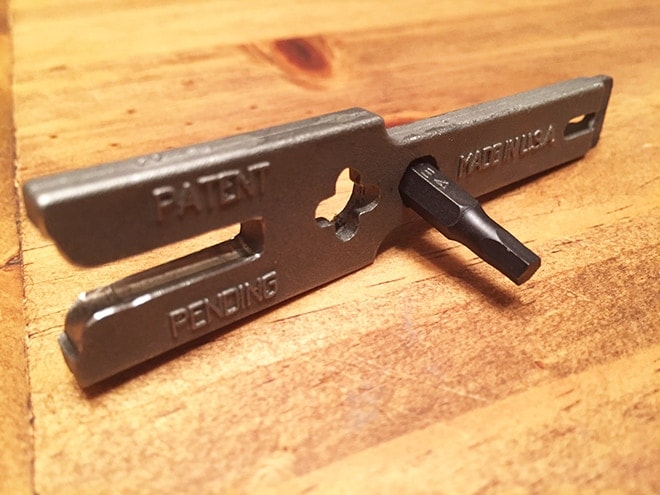 The quarter inch hex head is a little big for my bit but you get the idea. (Photo: Eve Flanigan)

My firing pin was caked with hardened carbon around the base. The stuff wouldn’t budge with a cleaner-lubricant-protectant (CLP ) soaked rag.  CAT to the rescue – dropping the pin into its cloverleaf-shaped aperture, a couple twists and the stuff had loosened substantially.  A couple more, with added pressure from me, and it was shiny after a wipe-down.   Parts of the pin itself bore buildup as well.  These spots were scraped off by simply pulling the pin through the same aperture at an angle.  The finely-ground stainless steel edge of the CAT made short work of the mess without etching the pin. 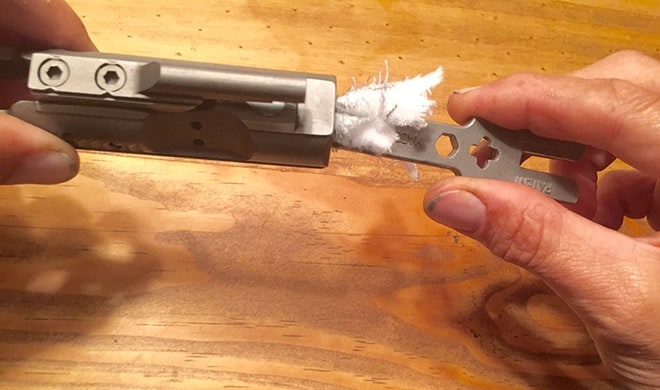 Three a patch through the slot at the top for those hard to reach spaces. (Photo: Eve Flanigan)

The bolt was a sight to be seen, with a thick crust of carbon and dirt caked onto the funnel-shaped curve on the rear of the bolt.  Again, CLP did nothing and I worried for a moment I’d burned stuff right onto my bolt.  This is where the CAT really shines.  Its forked end is made for just this job, its curves cut to match a mil-spec M4 bolt.  Some bolts may require a little more wiggling to rotate the tool around the bolt’s exterior, but the jigsaw-like match is guaranteed to clean the bolt to “tactical tolerances” as the manufacturer puts it.  In seconds, it was clean enough for more use. With a couple minutes of effort, the bolt looked like new again. 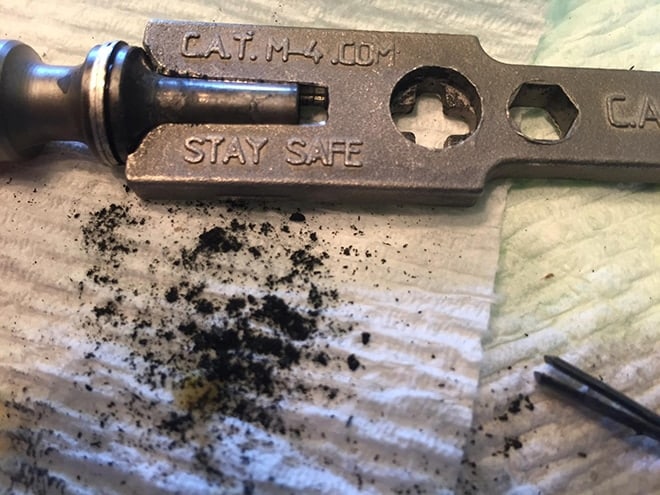 The CAT also makes swabbing out the carrier a breeze.  It’s outfitted with a slot for threading a patch through. Several random sizes of t-shirt “patches” can be cut to swab the sides or narrow end of the carrier.

One feature I haven’t used is the ¼-inch hex head slot. If your bits fit the aperture, the CAT becomes a high-leverage driver in addition to its other functions. 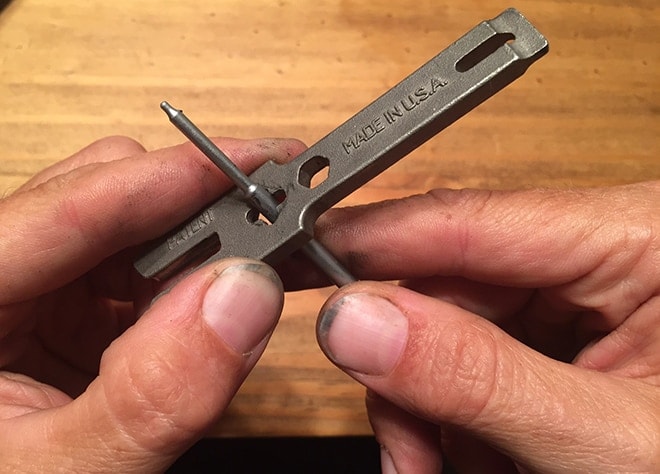 …And the gunk on the side of the firing pin. It does not however clean fingernails. (Photo: Eve Flanigan)

This tool is one of the handiest I own for gun maintenance.  It comes in a slim folder, with pictorial instructions to remind the user how it works.  It’s made of stainless steel weighs under two ounces. That bit of weight feels solid in the 3.5 inches of space it occupies.

In addition to the 5.56 size, the Combat Application Tool is available in a 7.62 model for the AK platform users. 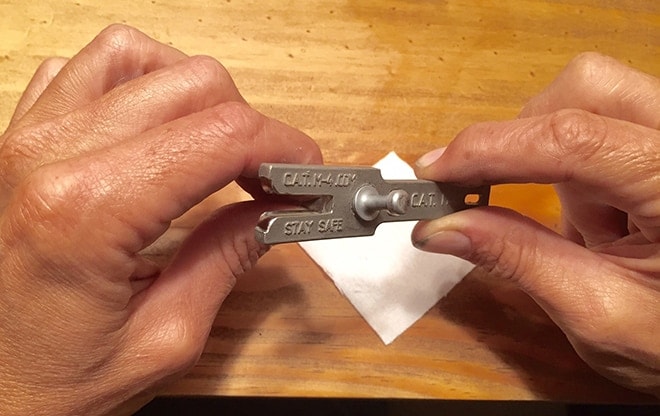 The CAT is still made in the USA, but apparently is now sold only through dealers. LaRue Tactical is one, and they’re selling it for a buck less than the $35 I paid several years ago. That’s a great value for the headaches and time saved getting your rifle really clean.