Crye Precision makes a wide variety of gear and clothing.  All of it bears evidence of being well engineered.  Even their most simple gear, like these MagClips, are truly precise.

The MagClip is an easy concept to explain.  A polymer band wraps around the base of an AR-15 magazine.  It is held in place by a long screw.  Two polymer teeth extend from this, up the body of the magazine.  These for the clip part of the MagClip. 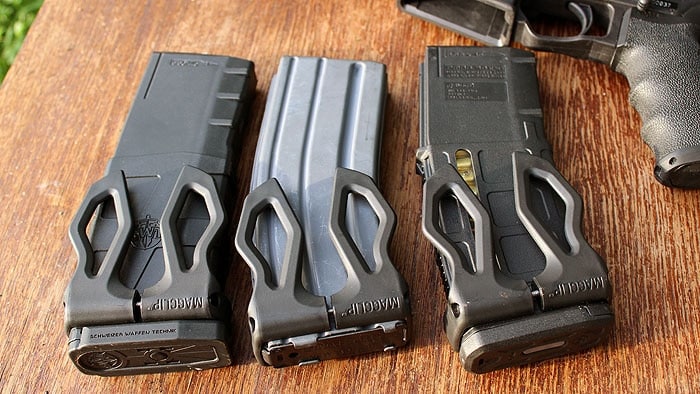 The MagClip is flexible enough that it can attach to thicker objects, like a belt, or thin material.  They work great in a pants pocket, under a web belt, or tucked inside a pair of pants.  The clips make it easy to store extra magazines inside a bag, or on the outside of a pack. 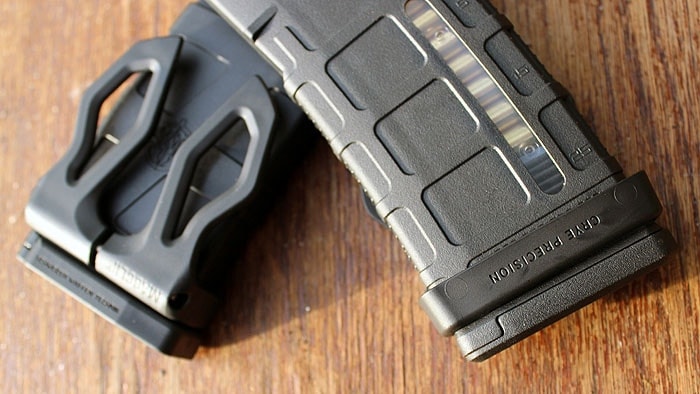 The MagClip’s polymer band will fit around Magpul PMAGs, S.W.T. UMAGs, and aluminum or steel box mags.  The tension is adjusted by the screw, which threads into the opposite side.

With G.I. mags, the tension of the clip holds it in place on the magazine.  With polymer magazines, the clip rides right against the base-plate.

The MagClip might seem a bit obtrusive at first, but the clips themselves are really not a hindrance.  They are not long enough to interfere with the loading of a 30-round magazine.  They aren’t tall enough off of the body to get in the way.  If anything, the extra texture makes holding onto a magazine easier.

And once you are used to using them, the MagClip even helps orient you.  No more visually checking a magazine to make sure you are inserting it correctly.  All magazines are held in the same direction, facing the same direction, which makes for good habits and faster reloads.

The clasp on the MagClip’s clip is just tight enough to hold things in place, but not tight enough to catch on any loose material.  As you can see in the photo above, the clip pinches but doesn’t actually hook.

That allows you to hook them just about anywhere.  While the black polymer isn’t subtle against the tan of the cargo pants I’m wearing in the video above, they disappear more easily on blue jeans and dark cloth.  The MagClip is also available in a true khaki color. 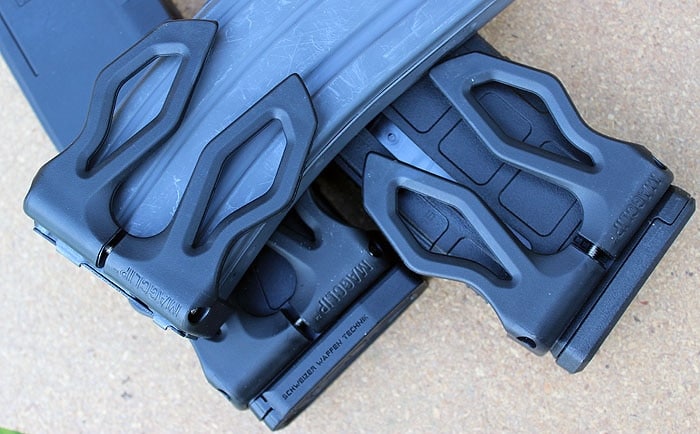 That makes them easy to conceal.  While you ay not carry an AR concealed, exactly, a pistol like the Extar above is small enough to get into a pack, like the 5.11 Covert Triab.  And that combination will allow for the concealment of a lot of firepower.

The MagClip takes a bit of brute force to install.  The polymer is tight.  Lining up the screw is the most complicated part.  After that, it simply screws down and the gap between the sides gets smaller and smaller.

Crye Precision sells them in sets of three for $21.70.  Not bad for something so well designed and genuinely useful.