A good friend of mine called up last night and asked if there was any trick to getting a scope sighted in on top of his new Ruger 10/22.  So we talked about scope rings and different types of mounts and distances.  We talked about grain weight and velocity and how variations will frustrate his efforts.  I knew full well that he didn’t have a shooting rest or a gun vise.

I told him to brace it well. 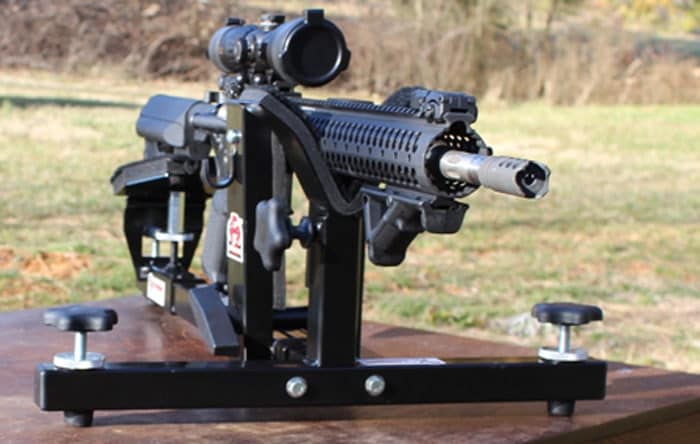 That’s the trick, I guess.  Or as close as I’ve come to figuring out a trick.  I used to sight in rifles by standing by a maple tree with a convenient branch that allowed me to balance the gun.  But it was an inexact science.  Heavy recoil meant significant repositioning between shots.  It took me forever to sight in guns.

When I worked with my first shooting rest, I felt like a true amateur.

CTK makes solid products designed to maximize the potential of your guns.  Their P3 Ultimate Shooting Rest is a steel T with a padded Y on the barrel end and an adjustable pad for the buttstock.  The MSRP on the shooting rest is $125.

Every aspect of the piece is adjustable.  The Y arm can move up and down, and has a ruler on one side for precise measurement and adjustment.  The buttstock pad slides forward and back, moves up and down, and can be fine tuned to match the angle of a stock. 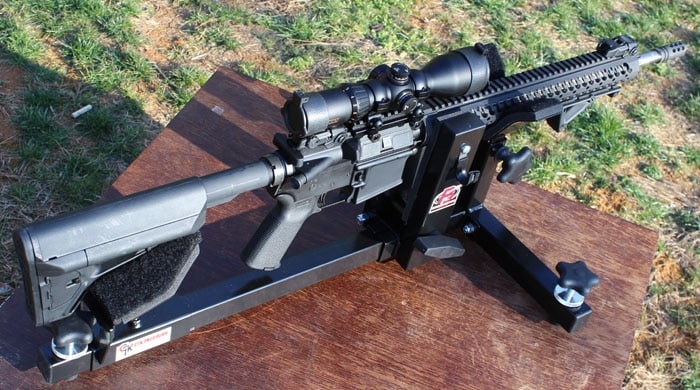 At the ends of the T are three star shaped dials.  These raise and lower the rest and are useful for leveling out uneven tables or making fine adjustments.  Each has a wide locking bolt that locks the rest into place.

The limbs of the rest are long enough to secure with clamps on a bench, or with bags of shot or lead at the range. 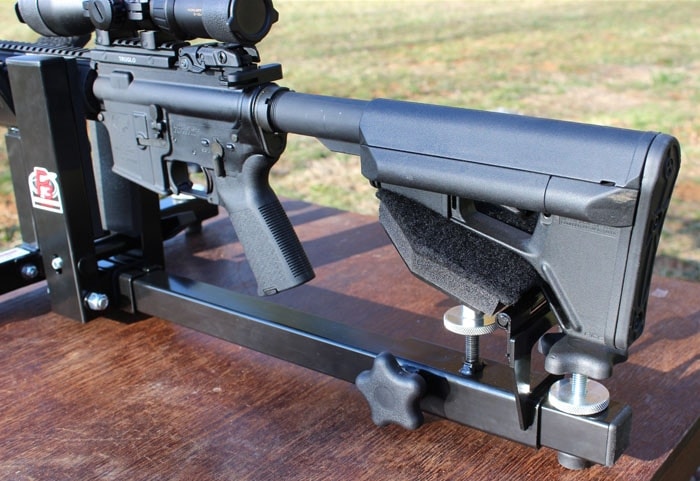 The rest is set up differently than some.  The pad for the buttstock doesn’t cover the end of the stock, so you can still get down on the gun, get a cheek-weld with your shoulder on the stock, and maintain natural eye relief.

The Ultimate Gun Vise is the same frame, and forend rest, but it has a padded vise in place of the butt-stock support.  It sells for $130.  Or the vise can be purchased separately (for $50) and used with the rest, as it is pictured here.

This part is much harder to explain.  The vise secures to the long leg of the shooting rest’s T. 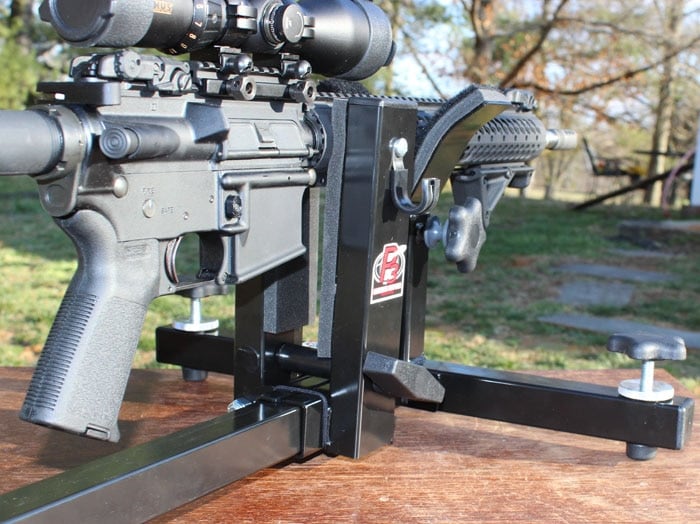 The vise is padded so it won’t mar the finish on your gun.  When it is open, it slides easily along the bar.  The two halves are held together with an elastic cord beneath the vise that pull against the jaws and keep them open.  But a turn of the dial secures the jaws.

The vise holds a gun secure enough to mount optics, or drive out pins.  It is a great way to clean a gun.  The advantage is obvious enough — with the gun secure, both hands are free. 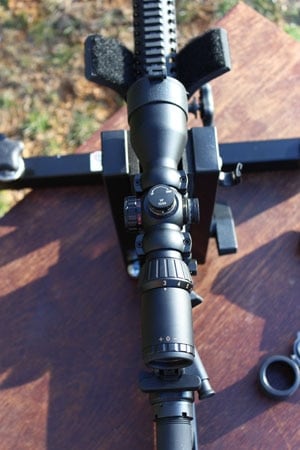 The P3 from above.

When used in conjunction with the rest, it can hold a rifle down while you turn dials on a scope.  Simply position the rifle, clamp it in and work the dials.

Using the CTK Rest and Vise

We unboxed the CTK Rest and Vise and immediately began work on the Stag 3G.  If you’re keeping up with our gear reviews, you’ll recognize the these photos form the Konus T-30 review we ran earlier in the week.  We have several tactical scopes in now that we’re working on.

The rest is long enough to hold the 3G, even with the stock extended fully (which is still a notch short of the length of pull I really need).  The vise fits high enough on the gun, but doesn’t impede access to the scope.

And the pad is short enough to fit in the Stag’s Magpul ACS buttstock.  There is enough clearance underneath for standard capacity magazines.

If rifles aren’t your thing, CTK’s vise is easily adjusted for use pistols or revolvers.  This is a boon for anyone trying to sight in a scope or red dot on top of a handgun.  If you want something even more compact and portable, CTK makes a Compact Shooting Rest that may be perfect.

There’s nothing sexy about bench work.  I admit it.  And some hunters and plinkers will go their whole lives without ever mounting a rifle in a vise, much less a shooting rest.

But CTK makes everything so easy.  And they make the rests in the U.S.  The CTK P3 is the type of rest you’ll pay for once, and use the rest of your life.