ERGO makes just about everything you need for your AR except the receiver.  Stocks, grips, rails, slings.  In the ever evolving world of mix-and-match AR modularity, Ergo is a big name.  And no wonder.  This Moriarty, New Mexico based company makes reasonably priced gear, and their products are as dependable as anything on the market. 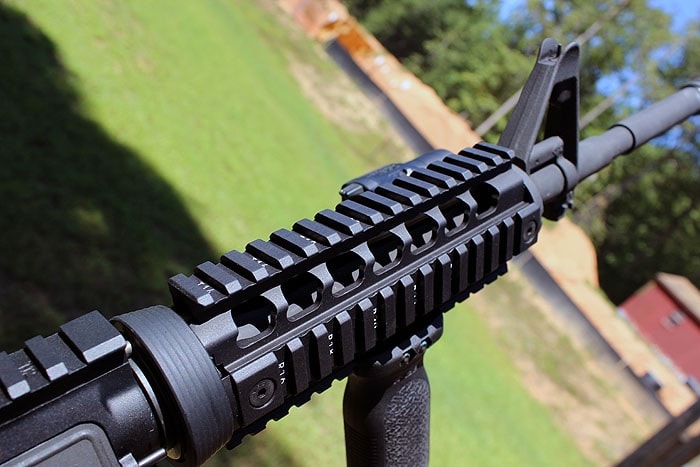 I’ve had this forend in for review now for almost a year.  It arrived close on the heels of the Button Slings I looked at last week, and piled up with a collection of tactical gear that needed a solid rifle in order to be reviewed.  But carbine length AR-15s were in incredibly short supply.  As a review writer, I typically pair gear with the guns I’m working with.  But all of my ARs went back to their factories.  The friends I had locally who owned ARs sold them when the prices were simply too good to resist.  Those who kept their rifles weren’t eager to let me monkey with them, or beat them senseless like I sometimes do during a review. 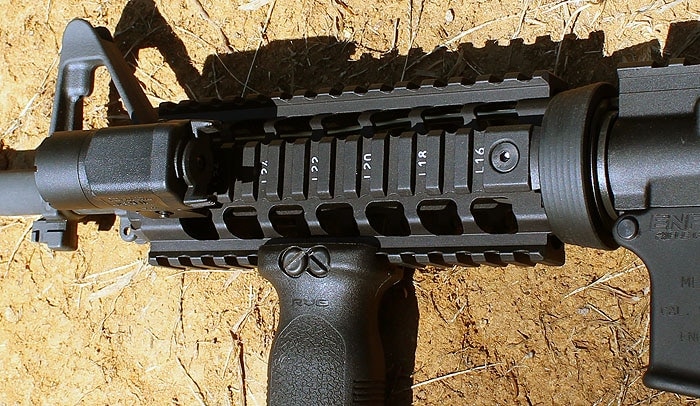 So I had to wait.  Had being the operative word.  It looks like we have come through the tactical rifle scare of 2012/2013.  And the Enfield MERC415 is the perfect candidate for a rail upgrade.

The typical carbine length AR forend is nothing more than a functional grip.  Inside, a piece of steel helps funnel heat through vent holes, and away from unprotected hands.  But the Ergo takes ventilation to the extreme. 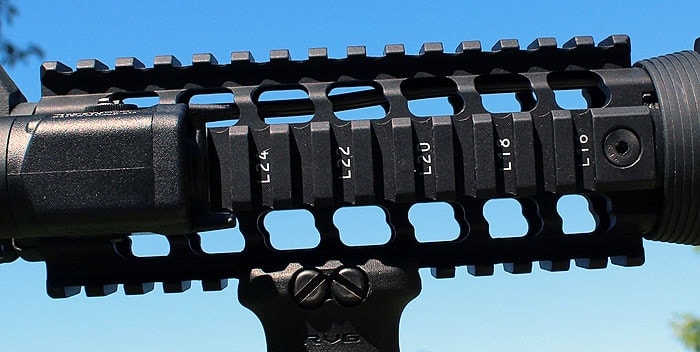 On the MERC415, the standard has been upgraded at the factory.  The MERC415 has a Magpul MOE forend.  While it isn’t comprised of naked rail space, it has some modular options.  Rail can be added, as can specific grips and accessories from Magpul specifically.  But it is a bit bulky for my taste, especially when you start adding accessories to the outside of the grip.  That said, I’m not going to knock Enfield’s choice of the Magpul furniture.  It feels really good in the hand.

But I like the options a good four sided railed forend provide.  And that’s where Ergo excels.  Their Z Rail is a two piece drop in rail that’s incredibly easy to install.  Simply remove the existing forend, drop in the two halves of the Z Rail, align them, and bolt in place.  Instillation took less than two minutes, start to finish.  And there was no difficult alignment needed. 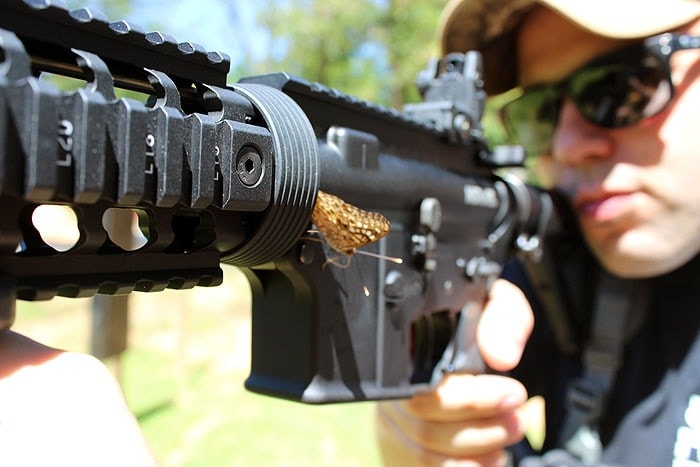 Shooting with the Z Rail

The anodized aluminum is robust, but structured to provide a maximum of weight reduction and air flow.  Once the two halves align, the grip feels like a monolithic mass, only without the weight.  And the distance between the gas tube and barrel and the sides of the rail keep it from getting too hot to hold. 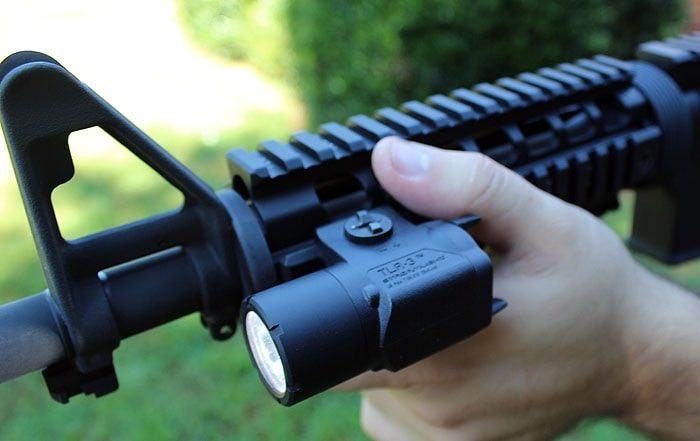 And holding onto the grip is what it’s all about.  Ergo has rounded over the edges of the rail to eliminate the sharp angles found on most picatinny mounts.  It almost has a soft feel, but only on the edges.  The mid sections of each rail still provide all of the surface area needed for attaching fore grips, like the one pictured above (from Magpul), or lights, like this Streamlight TRL3.  But if you want rail covers to fill in the gaps, the Z Rail comes with them.

I was completely surprised by how slim the Z Rail turned out to be.  It fits perfectly in the hand.  Yet it still manages to float free of all of the heat generating surfaces.  The tolerances are tight, but effective.  And the grip feels much more solid than the typical plastic forends. 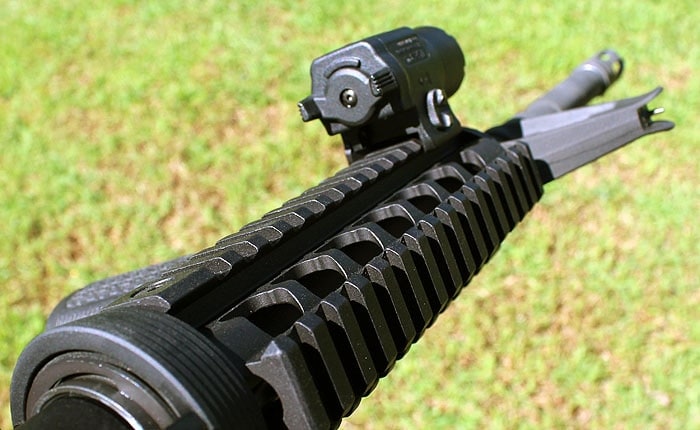 Check out Ergo’s extras.  They make everything in the states, which I see as a big plus.  The Z Rail isn’t cheap.  It sells for $116 or so, retail.  But what it provides is worth it. 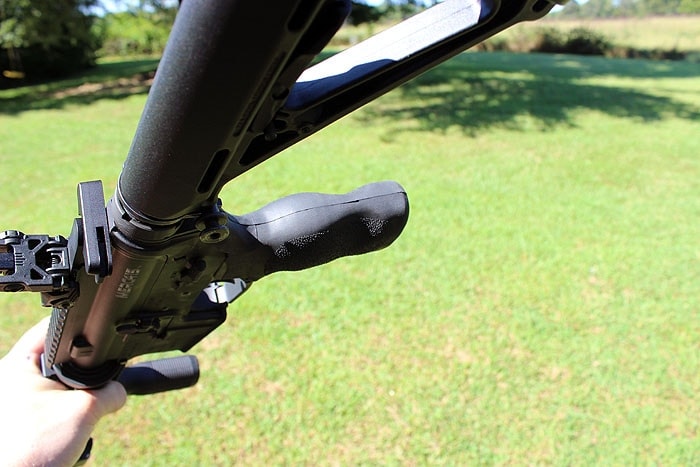 As an aside, I’ll ad this.  Ergo makes the widest variety of grip sizes I’ve ever seen.  This picture hardly does it justice.  If you are looking for a robust grip that would fill the hand of Andre the Giant, Ergo may be your best bet.