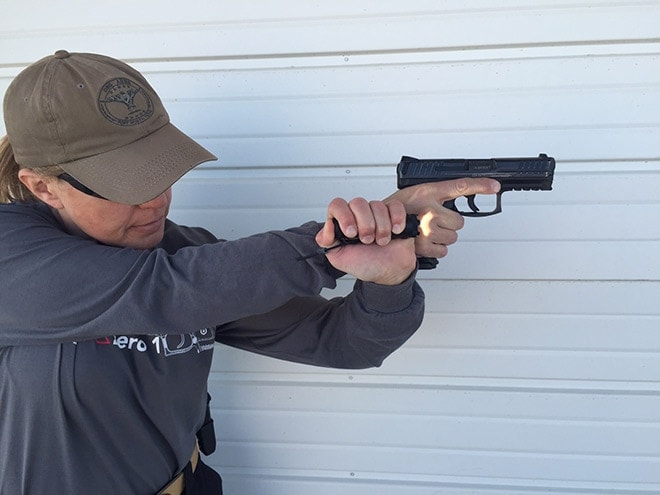 Bearing down with the complements of some First Tactical gear. (Photo: Eve Flanigan)

Last fall, a new company started showing up in those usually annoying banner ads on various sites I visit. First Tactical was a brand I’d never heard of. Being ever in search of useful tactical stuff, I took the bait.

Wow. Turns out, this place has a big selection for a new company and, if what they’re putting out there is any indication, they mean business.  First Tactical gear is oriented to police officers and serious range rats — myself being in the latter category, with substantial influence from the former. Maybe you’re a department rep looking to replenish or upgrade duty gear with something that will please everyone.  Maybe you’re a recreational or sport shooter wanting professional-looking, functional gear. Either way, First Tactical should be on your go-to list. 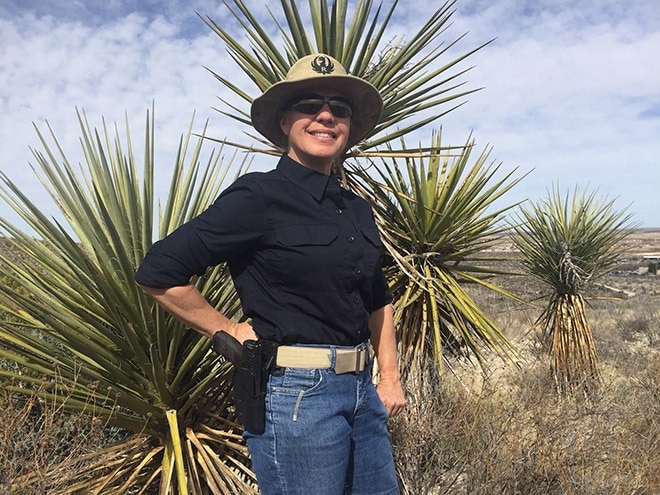 The California-based company was kind enough to send me a shirt, pants, and light for testing.  That was a positive experience, but what won me over was meeting the company’s staff and designer at the 2017 SHOT Show Media Day at the Range.  There, I was able to view and handle products in a way that’s not possible on the website.  Here are some highlights from both the SHOT experience and my own tests.

I quickly became enamored with the range belt. It’s the perfect middle ground between a rigger’s and a competition belt. Super strong, with a sturdy buckle and long hook and loop closure, it’ll stay in place and not sag.  A big difference is in the buckle—it’s steel, but flat, with a low profile that won’t bulge under a shirt.  My life takes me from the range to the grocery store on a regular basis. The range belt is the perfect companion for both range and concealed carry.  That dip that wears in the back of your belt when you’re an active person? First Tactical just built that right into the design.  So instead of having to fight a stiff new belt, it fits from day one.  Talk about intelligent design. And the price — $19.99!  There’s really no reason not to buy one if you carry OWB or IWB on a regular basis. 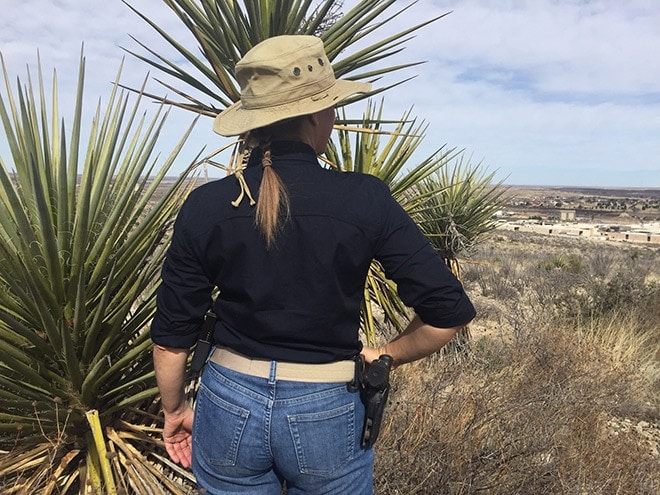 Another product series not sufficiently represented on the website are the gun bags.  First Tactical makes bags that can be connected with included molle and snaps. Your daily backpack can convert to a rifle-toting range bag in minutes, and look good too.  The system is tight-fitting to both the user and between components.

On to the gear I actually got to try at home: the Specialist tactical shirt and Specialist BDU pants, and small TriTac light.

I’ll spill this right here: the Specialist tactical shirt is now among my go-to garments when I want to look professional and feel good doing it.  At SHOT Show, I was fortunate to meet designer Cory Nykoluk.  He described how he wanted to deliver a garment that wasn’t just a smaller version of a men’s shirt, but actually incorporated input from female officers.  Mission accomplished!  This shirt has a cut that makes me look a few pounds thinner. It has a long tail that’s not bulky but never threatens to give me plumber’s crack. I can unbutton the third button down on warmer days and get a little breeze without showing cleavage. Professional to a tee! 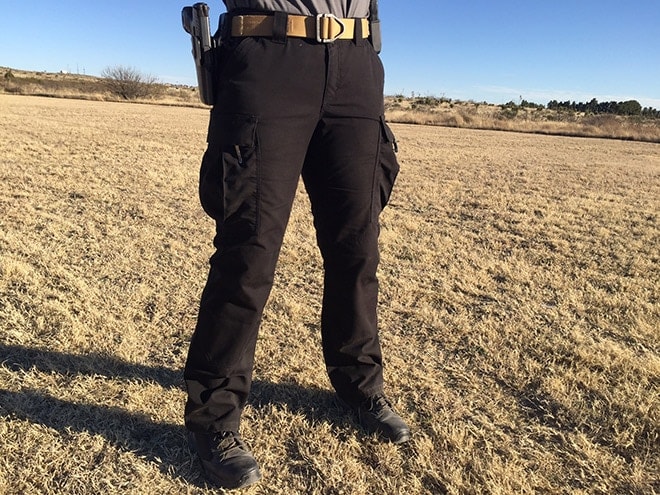 The meticulous attention to detail in this garment is impressive. Polyester-cotton ripstop fabric with Teflon treatment makes it naturally pressed-looking, stain-resistant, and easy to dust off. There are two roomy hook and loop document pockets underneath the breast pockets. The visible pockets have a pen slot and flap that stays neat. There’s a finished, invisible gap for a mic wire on the side seam.  The collar buttons down and is stiffened to stay pressed-looking without effort.  Extra buttons, a hanging loop, and a nametag are all included but hidden.  The cut is form-fitting without being revealing. Optional epaulets are included. The price is right at $44.99.

Much as I adore this shirt, I do wish it were available in a broader range of colors. First Tactical’s midnight navy, which my copy is, is almost imperceptible from black.  They also have black. Offering more colors in the tactical palette would make it easier to make an outfit out of First Tactical clothing, as well as extend my use of the shirts into summer.  Many departments need khaki or coyote tan for uniform use.  Hint, hint, First Tactical. Thanks to FIME Group, by the way, for supplying their REX 01S pistol shirt to go with the pants. 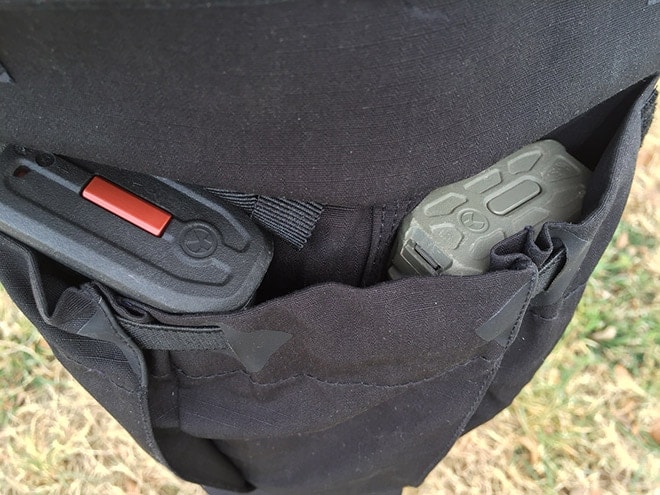 The Specialist BDU pants ($39.99), which I tried in size eight black, have similarly detailed features.  Those who prefer blousing will find a drawstring and toggle at the cuffs.  Those who don’t will find them easily hidden. Knee pads can be inserted internally.  Roomy cargo pockets have slots for mags, pens, and an innovative band of elastic at the top to keep mags (the website says water bottles, and I suppose that would work too) in place. Front slash pockets are awesomely deep. It’s rare to find a women’s pant design that considers that has real front pockets. Hooray!

The cargo and rear pocket flaps are stiff and the hook/loop material is perfectly angled to keep flaps from curling up — a common problem with tactical pants. The zipper is sturdy and the snap is attractive, strong, and has a donut-like design that doesn’t seem as likely to pull through with age as some do. 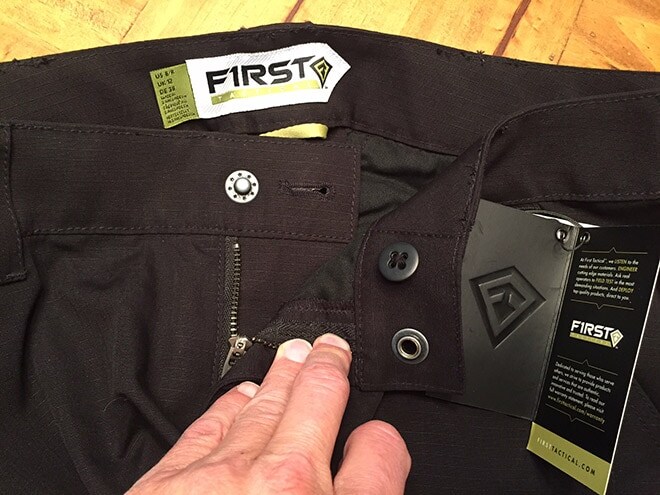 I shot a police carbine qualification in the Specialist pants as well as teaching all day in them. There’s a gusset on the inner thigh for flexibility, a very good feature, but they did feel a bit constricting in the front of my admittedly hefty thighs going into and out of prone and kneeling.  I love how dirt and dust brush right off.  Unlike a certain other big-name brand, First Tactical used their heads and didn’t try to make hip huggers out of these.  The waist is perfect for strapping on gear and keeping it secure and comfy above my hip bones.

The only thing I really dislike about both the pants and shirt is their affinity for lint and pet hair.  When I pulled them out of the dryer on a dry winter day, it was dismaying to see they’d collected fuzz from other clothing. With the shirt on, I dare not sit on upholstered chairs in my house. Every light-colored hair from my cat is immediately visible on the midnight-navy fabric, and it takes a good treatment with tape to keep the garments free of fuzzy distractions. Some lighter colors, especially of the shirt, would help hide the fuzz to preserve that Class A look. 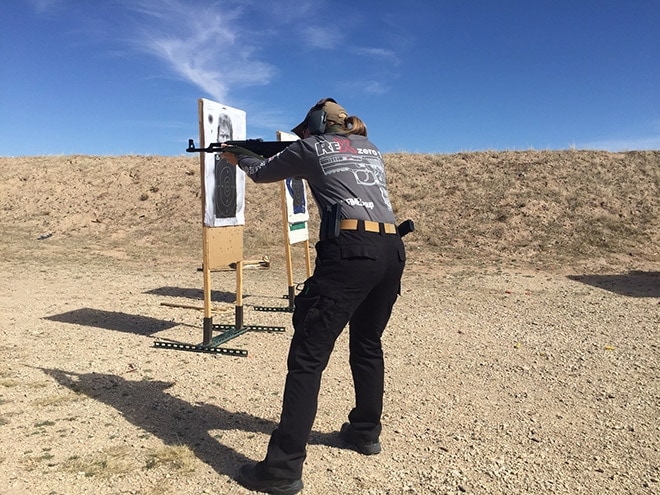 On the range the pants and other gear performed admirably, though I did notice some restriction of movement in the pants. (Photo: Eve Flanigan)

My minor complaints aside, both garments represent a substantial improvement on function and appearance from some better-known brands, and at a price that’s more than competitive.  The specialized fit for women is unmatched in comparison to certain other brands selling duty gear.  Those shopping for uniforms should be able to make both admins and officers happy with First Tactical.

Another win is the TriTac flashlight.  I tested the small model, which sells for $49.99.  This little light has more than enough features for high-performance demands for duty or home and personal use.  First Tactical kept with the theme of feature-rich detailing here.  The light has a changeable rim so one can choose a smooth end or a rather sharp bezel.  I opted to install the latter, which was easy. The bezel has stayed tight through weeks of regular carry. 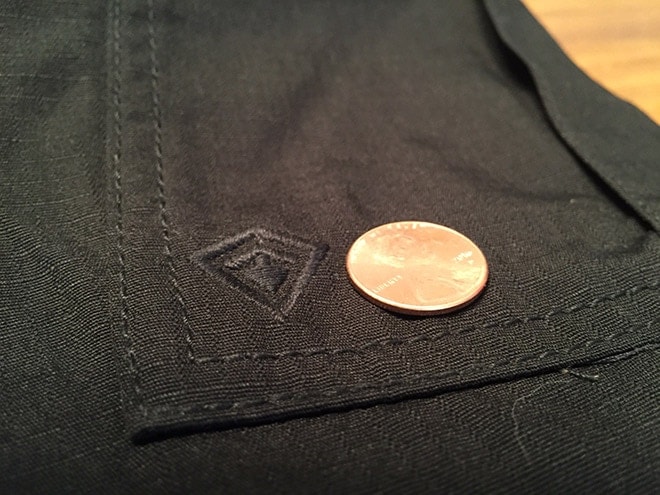 Black on black branding next to a penny. (Photo: Eve Flanigan)

Innovative design is included even in this little product, with an optional loop that weaves into the pocket clip.  The loop is made of thin bungee material, with an ergonomic plastic half-loop that fits nicely over a thumb or finger.  The loop can be secured as the light is drawn from a pocket without any extra time or fuss, and makes the light both impossible to drop yet completely operable while handling a pistol.  Every tactical light should have this feature.

The Tritac has high and low settings rated at 261 and 86 lumens. There’s also an 18-lumen map reading setting.  I shot a nighttime pistol qualification course using the light, and it lit up the range with bright white light. The pressure switch on the tail end works flawlessly — if anything it’s a bit too easy to click to the always-on position. At one point I realized it was on when I didn’t intend it to be.  A CR 123A battery is included, by the way. 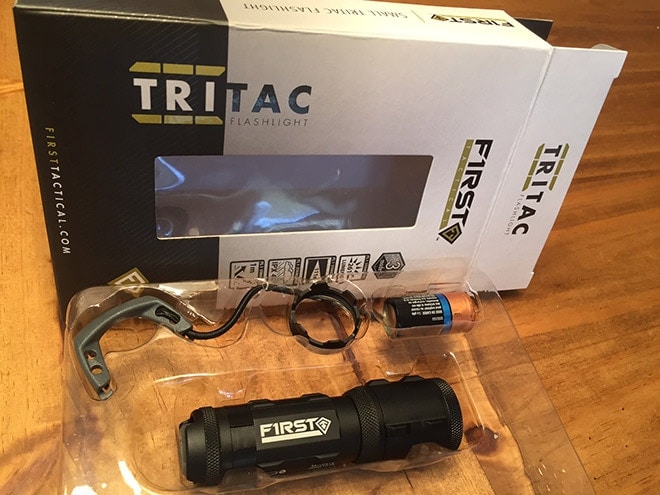 TriTac light just out of the box. (Photo: Eve Flanigan)

This little light is reasonably priced and so easy to carry.  My only problem with it was related to training: it’s so compact that it got “lost” in my armpit the first time I did a reload!  Knowing that, I simply positioned it a little less deep after that. Its compact size and easy operation make it perfect for whatever light technique a person wants to use while shooting. The tight pocket clip keeps it indexed for quick deployment and prevents it from getting lost in a pocket. 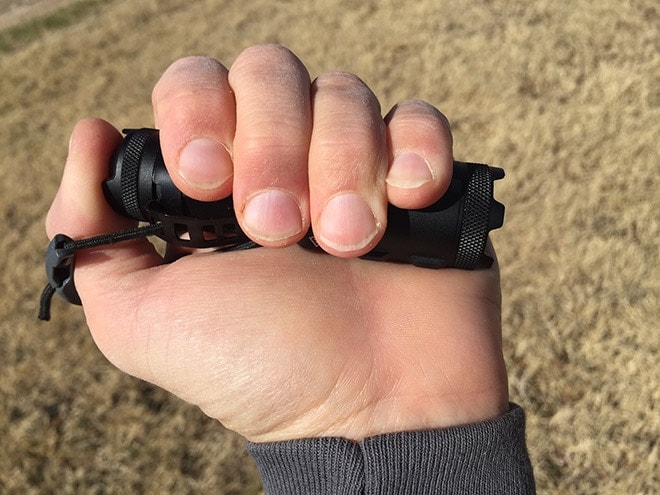 First Tactical is taking seriously their job of supplying operators with useful gear at a good price.  For now, factory direct purchasing is still available. It’s my prediction that this company will be a primary supplier of departments within five years.  They’ve put the customer first in design, attention to detail, and pricing.  Bigger suppliers who blatantly fail on one or more of those measures should be feeling the heat as this company grows.