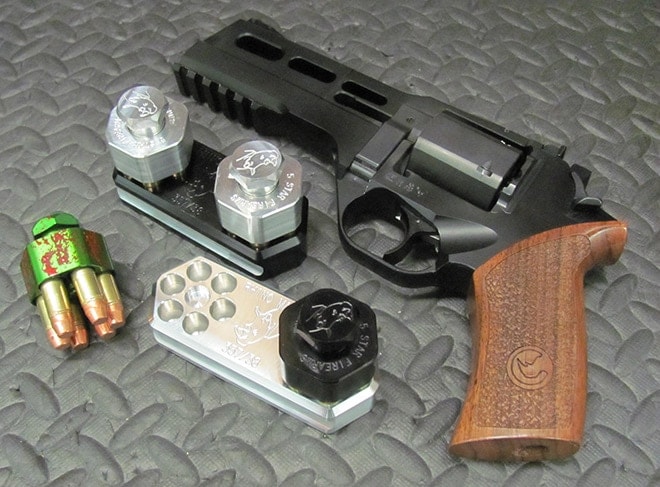 Wheelgun enthusiasts are used to being short on options. Between having less gun models and makers, far fewer common holster options, and less availability of cartridges at most gun shops, a revolver enthusiast has to become an expert in making due. And sometimes, there’s no real options, especially if you’re brave enough to try out one of the few new entries into the revolver market.

This is especially true in the speedloader arena. Safariland speedloaders are fantastic—fast, effective, and easy to use—but they’re only made for a few guns. The classic HKS speedloader is a solid standby made for lots of guns, but if HKS doesn’t provide an option, then you might not have one at all. This is where Five Star Firearms saw an opening in the market and moved in aggressively.

Here I’ll be reviewing Five Star Firearms’ products for the Chiappa Rhino, a gun with no other production speedloaders. 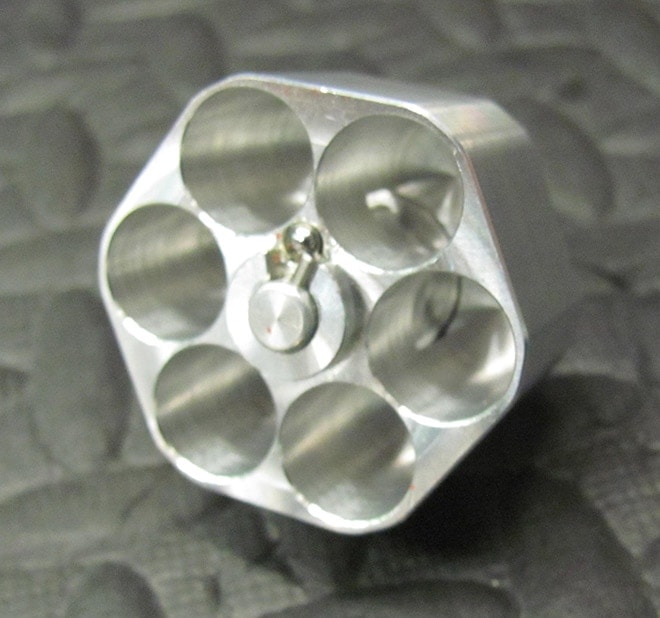 Five Star Firearms is a small company based in Illinois who have been in the business of making CNC machined speedloaders out of aluminum for a few years. The company has made a product that stands out on a few fronts: one of the most important ones is that they make speedloaders for an enormous range of less-common revolvers like the Taurus Judge, seven and eight shot .357 magnums and, as we see here, the Chiappa Rhino. If you want speedloaders for these guns, Five Star provides you with an option.

I got a set of four speedloaders and two loading blocks to review. They all come in basic plastic wrap packaging. Five Star offers their loaders and blocks in a few finishes, and I got a little sampling in their three most common finishes: silver, gloss black, and a green-and-gore “zombie” themed arrangement. 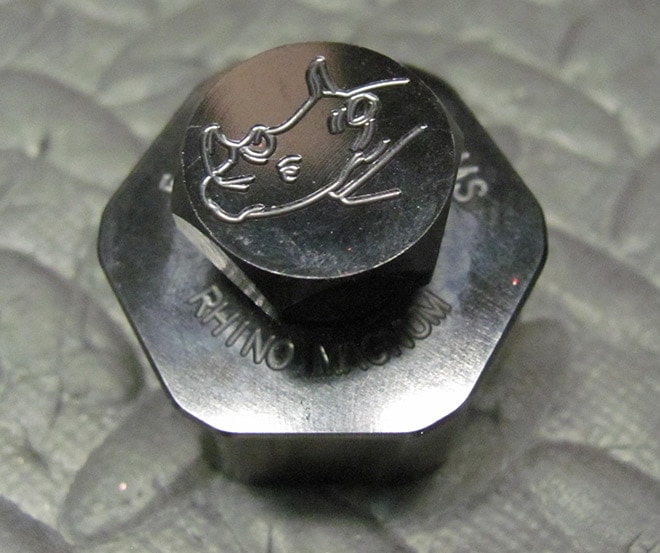 Out of the box, I have to say I had never been excited about the aesthetics of a speedloader or loading block before, but these look outstanding. The hexagon angles of the speedloader bodies are very cool and beautifully matches up with the Rhino’s cylinder. The handles are engraved with a sharp-looking Rhino design (except the ‘zombie’ one, which has a biohazard symbol). The finish on all products is impeccable and, on close inspection, I’m impressed by the lack of machining marks, burrs, or other imperfections. These appear to be top-quality products. 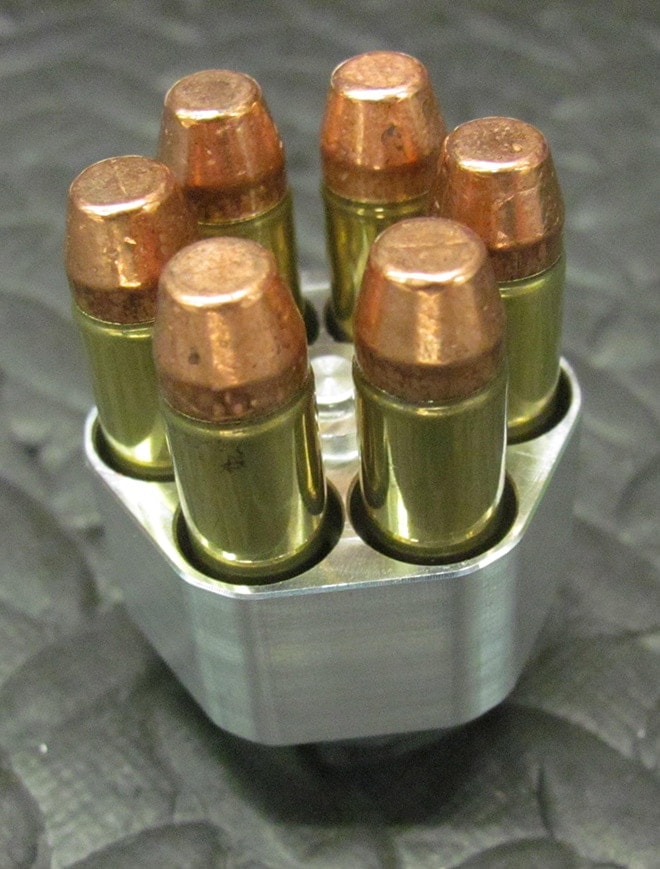 When you pick these things up you’ll know they’re made from aluminum, but that didn’t stop me from being surprised by how lightweight they actually are — they certainly look heavy. This is quite the perk if you plan to carrying one around as the only thing that weighs any noticeable amount will be the cartridges.

The loading blocks are what you’d expect after looking over the loaders — they’re beautifully finished and the machining is flawless. The loading block is designed to either give you a convenient place to put a pair of loaders for easy access (e.g. in a safe, next to the bed, whatever tickles your fancy) or to hold a set of cartridges bullet-down so you can easily charge a speedloader by putting it on top of the rounds. Unlike the speedloaders, the loading blocks have good heft, which is as it should be — it helps anchor them so they don’t tip over and makes it easier to charge a speedloader without the block slipping away.

So far, I’m very impressed. The quality of construction and finish on these is outstanding, and I love the way they look, especially compared to their drab, plastic cousins. But what really matters is, those plastic competitors work — how do the Five Star offerings stack up? 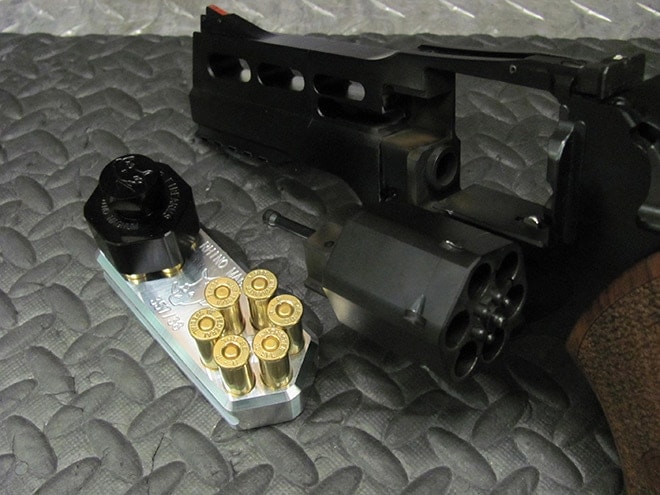 To test these products, I used all four with their respective loading blocks in a test with my giant pile of .38 Special snap caps, many of which are extensively used and a bit tortured, as well as using them to load my Rhino for several practice shoots and club-level IDPA matches. This provides a good idea of how they function in a few types of use.

The Five Star loader holds the cartridges in a way somewhere in between the HKS and Safariland in terms of tightness. The rounds have a bit of play, but the tolerances are definitely tighter than the HKS. I actually like this, as the HKS is a little too ‘rattly’ for my tastes, but the Safariland loaders only work as well as they do with that level of tightness because of their spring-assisted loading. The Five Star is at a happy medium.

Once they were loaded, I could shake the thing around, throw it, and generally behave like an unreasonable man without the loader releasing the rounds. There was one cartridge that the Five Star loaders didn’t handle well out of all the testing and it was one of my beaten-up old snap caps that is clearly well outside spec, so no issue there. 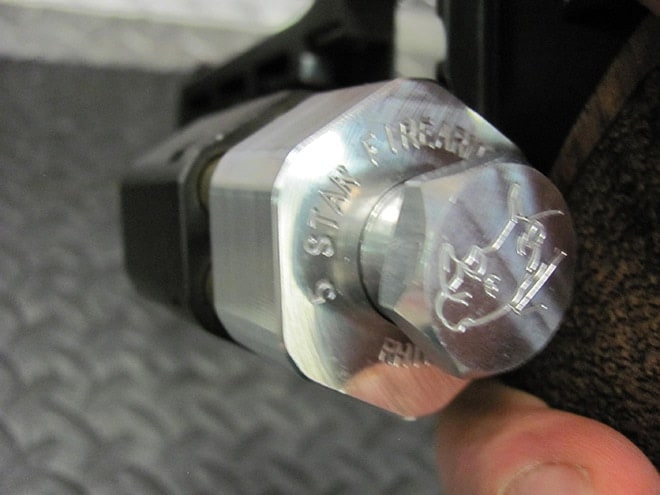 In terms of operation, I find the Five Star loader a little easier to use than an HKS because I find the counter-clockwise knob operation more intuitive and simply easier as your hand is turning away from the gun instead of into it. The turn of the knob has a tactile click to it, so there’s no mushy grey zone where you’re uncertain what the loader is doing. All considered, I had no issue with them in use. If there was any error, I can say it was my fault.

As far as the loading blocks go, there’s not much to say. They do what they’re intended to, and they look really good doing it.

So, the Five Star loaders work great in a vacuum. And, in some sense, a lot of the models also exist in a market vacuum as well — the Rhino loaders have no competition from other manufacturers, at least officially. But I’ve managed to jimmy Safariland Comp IIs and IIIs and HKS loaders to work in a Rhino, so I can compare those. If you have a gun that actually offers other manufacturer’s speedloaders officially as well, then how do you choose? 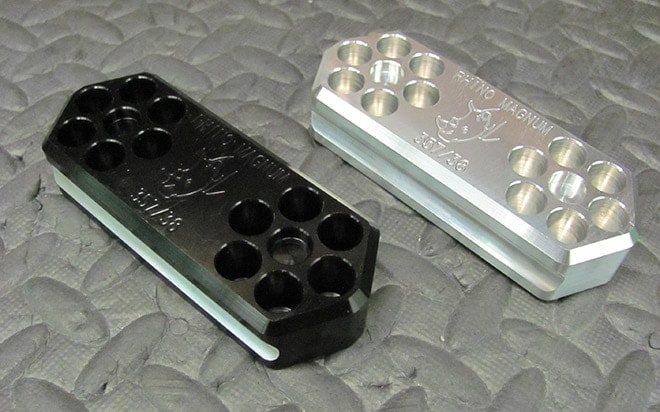 First, let me say that if you have no other official options, make no mistake, the Five Star product is top-shelf and you should buy them. If my samples are any indication of the overall quality of the line, then you can expect nothing but quality in a Five Star-branded package.

In a direct comparison, I’d also take the Five Star loaders over an HKS product. They work similarly both mechanically and performance-wise, and the Five Star product is more expensive. But it’s also indisputably more durable. You can step on these, drop them, and really get away with all kinds of abuse and they’ll be fine. The HKS loaders have a tendency to crack, being plastic and, while they’re easy to replace, I’d prefer something I can trust not to snap. The difference in weight is negligible and the Five Star product definitely looks nicer. 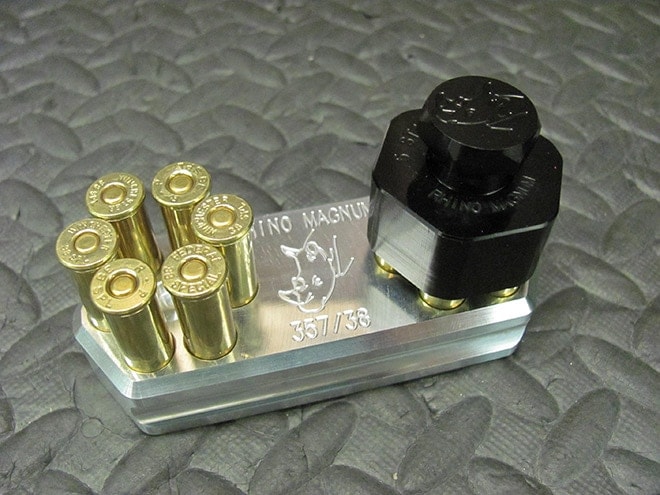 Against the Safariland loaders, I’d take the Five Star loaders unless you have a spring-loaded option available (Comp II or III). In that case, the spring-assisted speedloaders are so much faster that they’re indisputably better in function to the point where other considerations that give the Five Star loader the edge (durability, aesthetics) are irrelevant. For concealed carry usage, if you can, carry a Comp II and be done with it. For competition shooting, a Jet Loader or Comp III remains the undisputed champ, but they’re only made for a few guns.

Shooting my Rhino in IDPA, I normally use some slightly-modified Comp III speedloaders. They work wonderfully, but substituting them for the noticeably-slower Five Star loaders didn’t make a huge difference, adding an average of around one second to my load time. How much is one second worth to you? 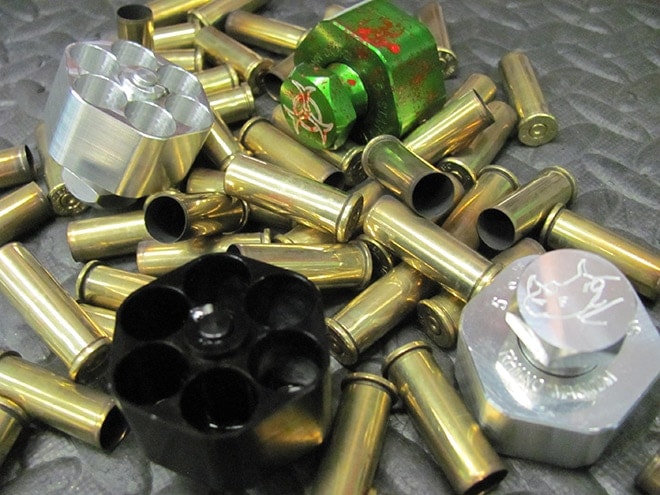 My Five Star speedloaders and loading blocks are outstanding products. I’m impressed with them from top to bottom. I highly recommend them to anybody who needs some ammunition carriers for a slightly more unorthodox wheelgun, or for somebody who just wants some range bling. They’re functional, they’re beautiful, and they work with my Rhino! What else can you ask for?