VZ G-10 Grips: 'Someone had to do some serious math to reach this level of craftsmanship'

VZ Grips makes high quality G-10 an wooden grips for shooters wanting to upgrade the aesthetics, performance (or both) of their 1911 or many other guns with removable grip panels.  Their high end grips are cut on CNC machines, finished out by hand, and offer a wide variety of colors, patterns and styles. 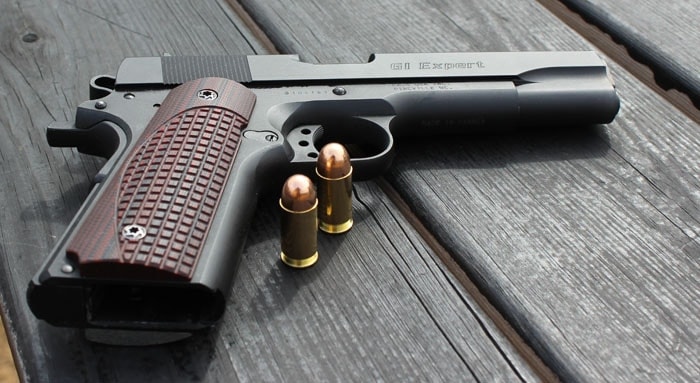 As grips are standard features on all guns, they are often overlooked until a flaw of some sort has been detected.  Some don’t offer enough traction to remain reliable when your hands are sweating.  Other materials, like many woods, aren’t cured well, or won’t stand up to the abuse of a duty gun.  Others are simply ugly.  Whatever the case, VZ Grips has a fix.

The concept is simple enough.  G-10 is a type of fiberglass developed for the electrical industry.  It was specifically designed to make circuit boards.  But like many industrial products, it has other applications.

Aztec Grips on the same Para

G-10 has a rigid solidity.  But that impact resistant strength isn’t brittle.  It has very low levels of water absorption.  It doesn’t chip or break easily, and it is durable.

G-10 is made by setting down layers of fabric that are impregnated with an epoxy resin.  The fabrics differ widely.  The resins can be dyed.  The effect can be as simple as black cloth in black resin, which makes a very uniform mass. 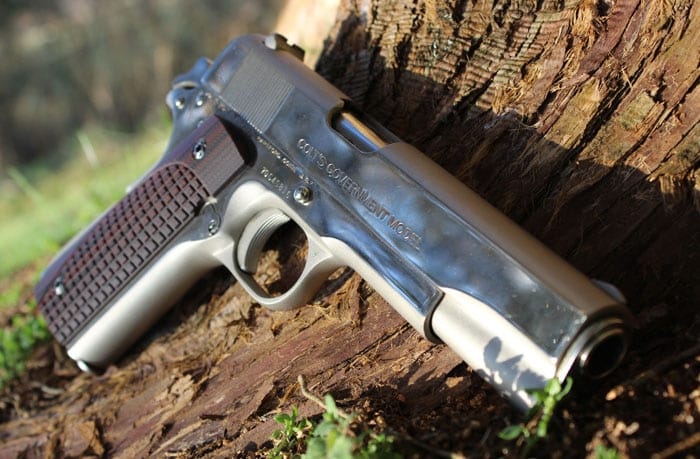 If the cloth and resin layers are mixed up a bit, then the end result can have visually distinct layers, like an Oreo.  Yet the whole mass holds together, because the resin permeates the cloth (which functions like rebar in concrete). 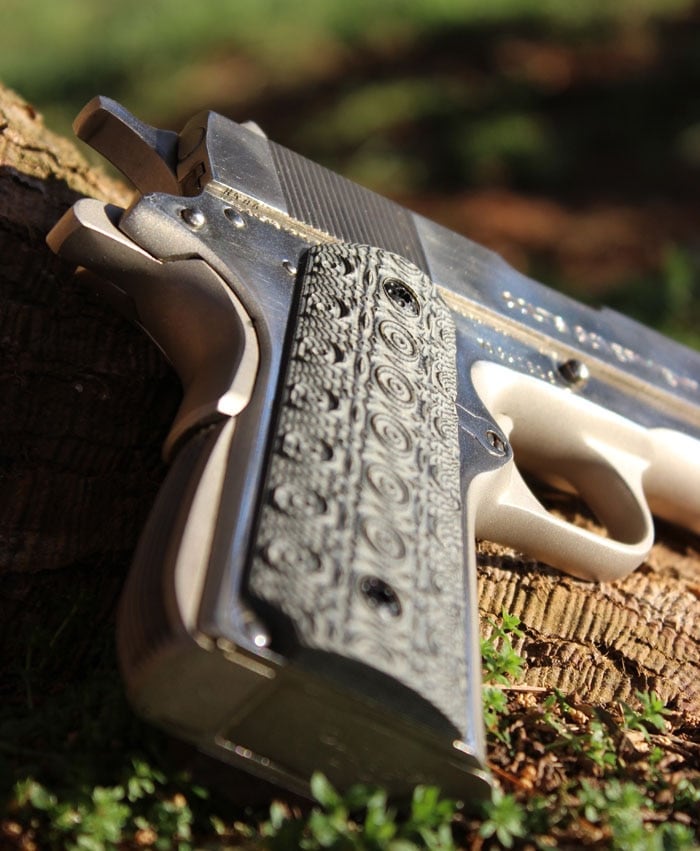 Aztecs on the Colt

Once this layered state is reached, the G-10 is baked, and the grips can be cut to shape.  VZ Grips runs small batches of each color variation and pattern on a CNC machine, then inspects and finishes each pair.

By cutting through the layers, the pattern of color is revealed.  The result can be subtle or garish, or somewhere in between.  And the cuts in the material can hold a fine level of detail.

It is this versatility that makes G-10 so popular for gun grips and knife scales.  The material can be polished smooth or aggressively checkered.

Unlike rubber grips, with their squishy (sometimes bulky) textures, G-10 bites into your skin like the bottom of a boot bites into loose dirt (maximizing the surface area of your grip).

VZ Grips has taken this notion of G-10 grips to a new level of precision.  I ran across their booth at the SHOT Show this past January and I was impressed.

Look at the precision here in the Aztec grip.  The concentric circles are so well spaced that the screw holes fit perfectly within the borders of the O pattern.  There’s no way that this is serendipity.  Someone had to do some serious math to reach this level of craftsmanship.

The two grips we have here are good examples of the aesthetic range of VZ’s grips.  The Aztecs are cut like a rasp.  They’re much more deeply textured than any grade of sand paper.

The Elite Tactical Carry grips are more subtle.  While sections of the panels are almost smooth, the center rectangles have a texture similar to a double cut file. 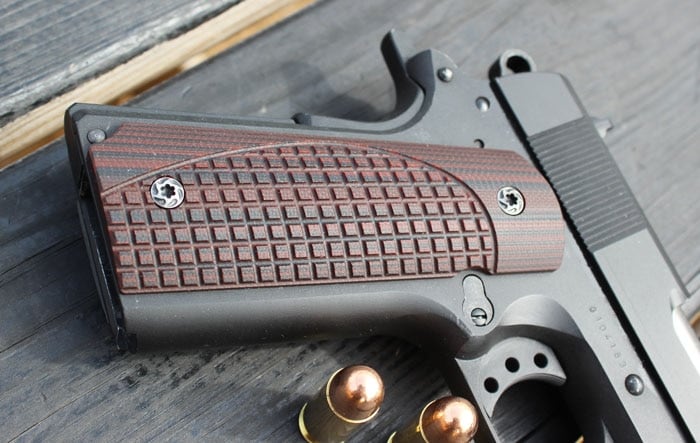 And the cloth and resin combination is more subtle, too.  These are clearly faux wood-grain, for those who want the look of wood with the performance of G-10.

I can’t decide which ones I like better.  The Aztecs are sharp.  The ETC grips are not so sharp.  I’d actually like to have an Aztec on the right side of the gun (for my fingers) and an ETC on the left side (as it allows for more movement of the thumb which works the controls).  But that wouldn’t look so hot.  If I could design my own, I’d have Aztecs with the thumb area of the left grip smoothed down a bit. 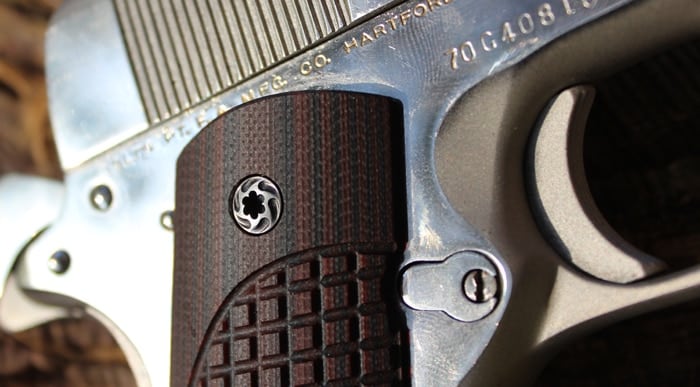 VZ Grips sells nice screws, too.  If grips are ow you dress up your 1911, these tiny screws are jewelry.  You have to have a certain level of panache to want screws this fancy.  But I’ll admit it.  I’m vain.  There, I said it.  There’s no excuse for having fancy grips held on with basic screws. 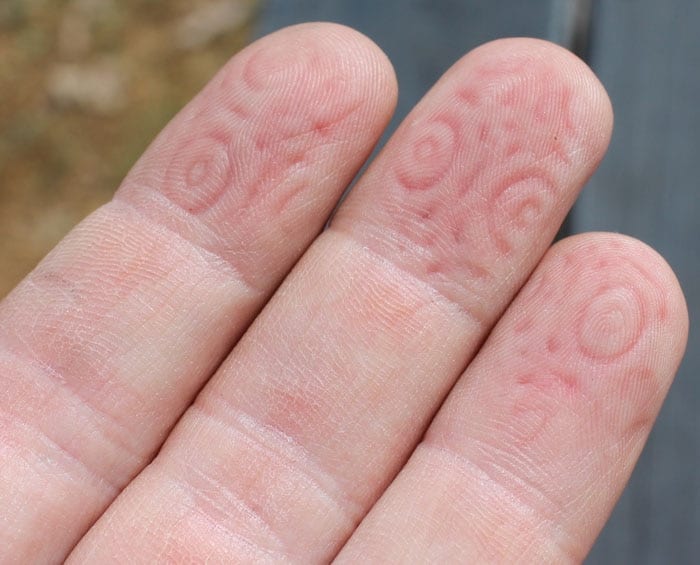 The Aztec grips will help you work on building good callouses.

The VZ Grips vary in price based on the model of gun.  The Aztecs and the Elite Tactical Carry grips go for $65.  The exquisite screws go for $19.

They make grips for the Beretta 92, CZ, Colt Mustangs, SIGS and others.  They’re even expanding into the revolver market.  If you’re looking for actual wood, they do that too.

Check out VZ’s grips.  They’ll leave an impression on you, for sure.