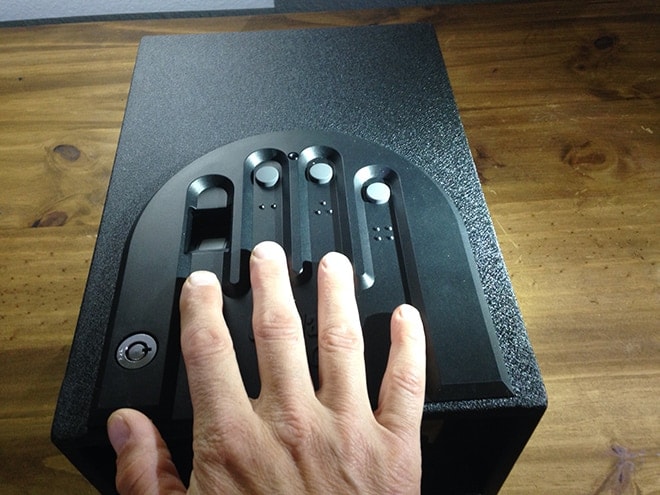 The GunVault company, better known for their Cannon brand safes, has a line of electronically accessed safes for personal use. This trial focuses on the MiniVault biometric model called GVB 1000. 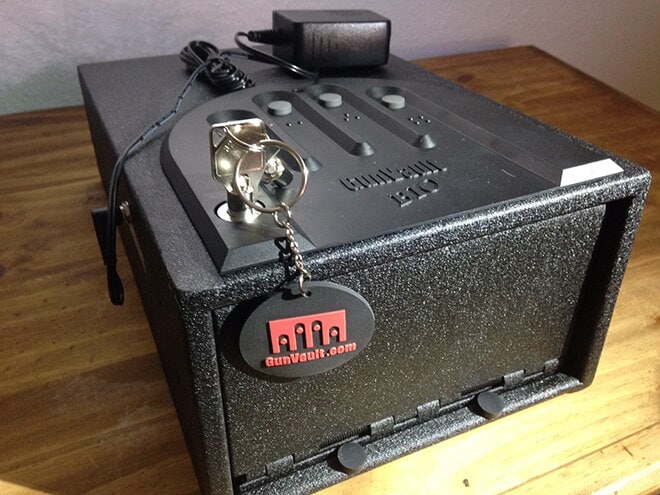 The MiniVault comes packaged in a sturdy cardboard box with a carry handle. It’s an attractive package that makes the nine-pound safe easy to transport.

There are two power sources for the unit—a two-prong electrical plug-in and a 9 volt battery (not included). Like a bedside alarm clock, GunVault recommends you use both.

The little vault is made of 18 gauge steel. The exterior is textured but has an easy-to-clean finish. Inside, it’s lined on all sides with thick foam. 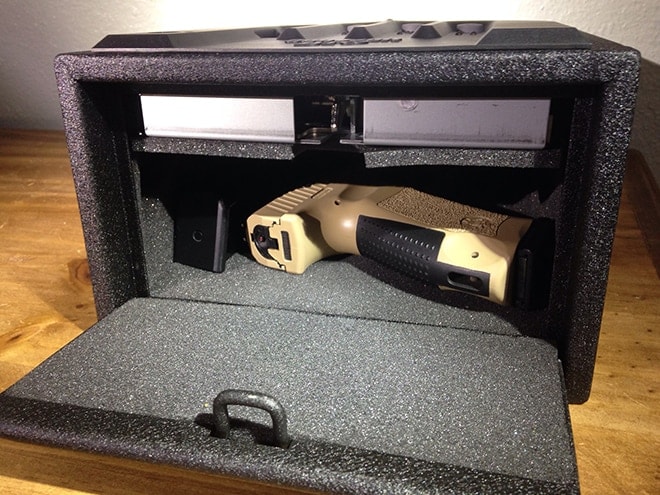 A full sized handgun fits perfectly, but no room for much else. (Photo: Eve Flanigan)

The top, flat surface of the rectangular safe has cutouts for securing it to the included hardware. It’s made to be mounted under a shelf, with the gun’s grip resting parallel to the shelf. I didn’t go so far in this test as to mount it. I suppose it could also be mounted vertically, though unlocking it in that position may be awkward on anything but a wide-open wall.

A full-size handgun and extra magazine fit nicely into the safe. Anything more makes it rather crowded.

Unlocking can be done three ways, all located on the top surface. GunVault includes two keys and a nice neoprene keychain with the vault. The key is a cylindrical, bicycle-lock style. 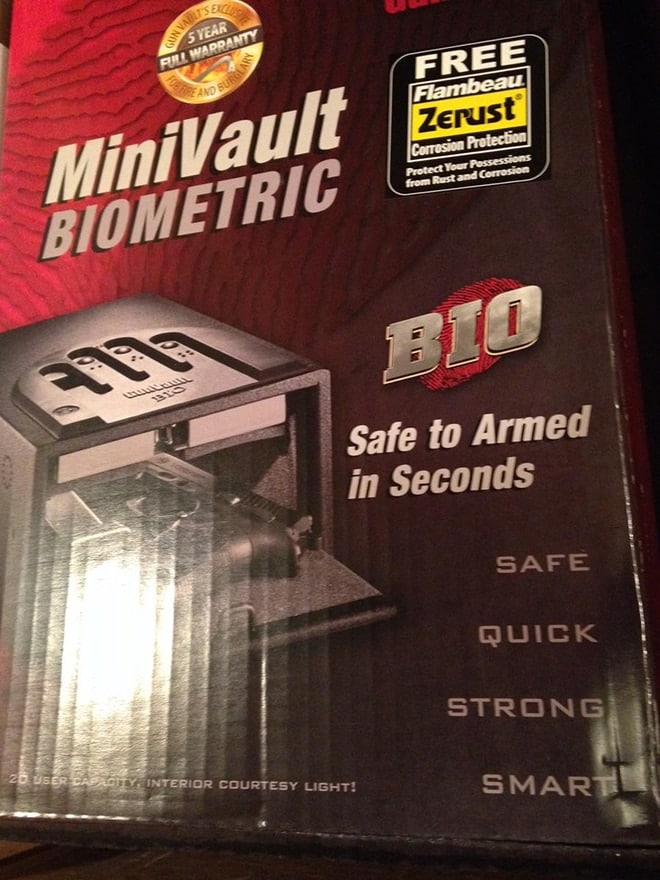 I found key programming and biometrics set up more complicated than I had assumed. (Photo: Eve Flanigan)

Keying in a self-programmed code is the second method of opening. Units ship with a demo access code which makes it easy to practice with. There are three buttons representing the right-hand middle, ring, and pinky fingers which can be programmed in the sequence and complexity of the user’s choice.

The programming proved more challenging than the simple layout makes it appear. To a mind that’s used to numbered or lettered keys, it proved humorously difficult to think in terms of a finger-tapping pattern. Then again, I’m hopeless on musical instruments for the same reason. There’s a series of button-pushing required, with a certain time required between each process, to program this function. It required reading the instructions from beginning to end first and then taking action.

Of course, the biometric function is the real draw with this safe. Multiple users’ prints can be programmed for instant access. Programming for this function took about ten minutes. 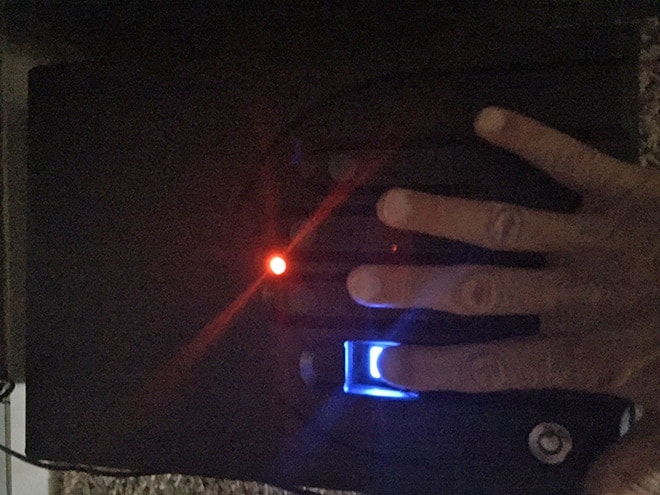 Fast access is obviously the most important trait of a safe, aside from keeping unauthorized hands off the gun. GunVault made this door mechanism very fast; it snaps open with an audible thud.

This model has a single light bulb which stays on for about three seconds after the door opens. It lights up the interior of the safe only, not the surrounding area. In terms of discreet access under stressful circumstances, the light and door-opening function are done right.

Time spent keying in the access code will of course depend on the complexity of the code. This is an act that is easy, but requires regular practice to perform efficiently, especially in the darkness. 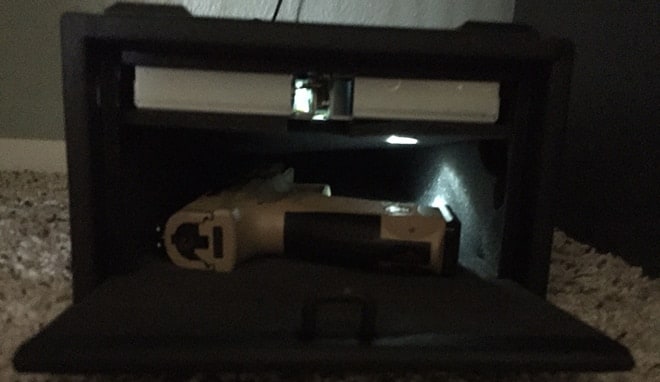 Interior light comes on for a few seconds after unlocking. (Photo: Eve Flanigan)

The fastest method of opening is the biometric (fingerprint recognition) feature. We timed it using an Iphone timer. Average time from the “go” command, with my hand hovering over the biometric reader, to the door snapping open, hovered around the two second mark. This unscientific method clocked opening at 1.9 to 2.3 seconds. This doesn’t count time to get a firing grip on the gun, which must first be slid out of the safe as the gap is too narrow for my women’s medium size hand to get inside along with a full-size handgun.

The MiniVault isn’t overtly a gun item, and might not be recognizable as such for the uninformed—a good thing. It does secure to a solid wall or shelf, and as such would slow down the process of stealing the unit—also a good thing.

Dual power modes are a great asset for ensuring access across situations.  Just remember to change out the battery on occasion. The typical smoke detector recommendation of a new battery at the beginning of Standard and Daylight Savings times would be a good rule to follow. Understand, if a good battery isn’t on board and electric service is down, the physical key is required to open this safe. 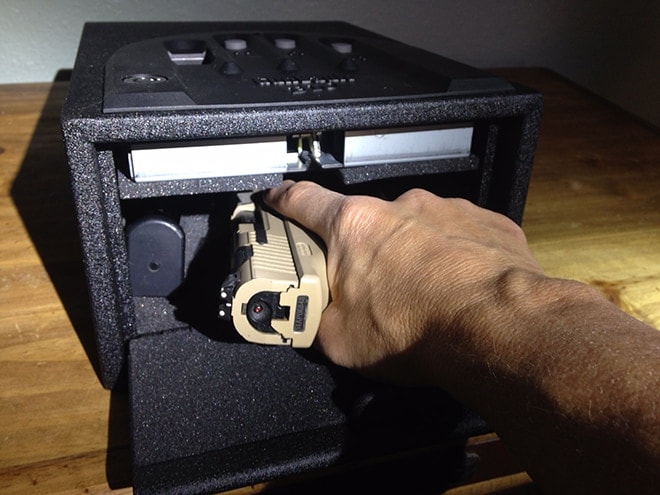 Because the fit is so tight, I found I had to slide, then grip the gun. (Photo: Eve Flanigan)

The sole, glaring, not-so-great trait only applies to the ten percent of the population that is left-handed. The device can be operated with one hand with any of the three unlocking methods. The right-hand bias of the keys and fingerprint reader will be no surprise to the lefties among us. It’s still perfectly operable with the left hand only, but forces the weakest fingers to do tasks that are more intuitively done with the strong fingers.

The MiniVault with the biometric reader retails for $339.99. It’s a great choice for those who are interested in rapid under-desk, safe room, or bedside access to their gun, and aren’t in environments where unauthorized hands might have time to unscrew the moorings and make off with the entire unit.

GunVault makes other biometric-access safes in different shapes and sizes. If this one is something like you want but not quite be sure to check out their website.

For those with less cash to spare who still want the security this safe offers, GunVault makes keypad-only models priced at $169.99 to $190.99, depending on features.