Virginia-based High Threat Concealment (HTC) aims to please the security community and armed citizens with a way to pack all the essentials of safety while looking just like all the other folks.

The company’s trademarked Low-Profile System (LPS) consists of an inner belt of hook/loop material that threads through the pants belt loops, and an outer belt, consisting of the user’s choice of magazine and accessory pouches, and holster.

HTC was founded and is operated by former contractors serving in Afghanistan. In some environments, they found themselves in need of both high-threat readiness and street-friendly appearance.  Thus, the LPS was born. 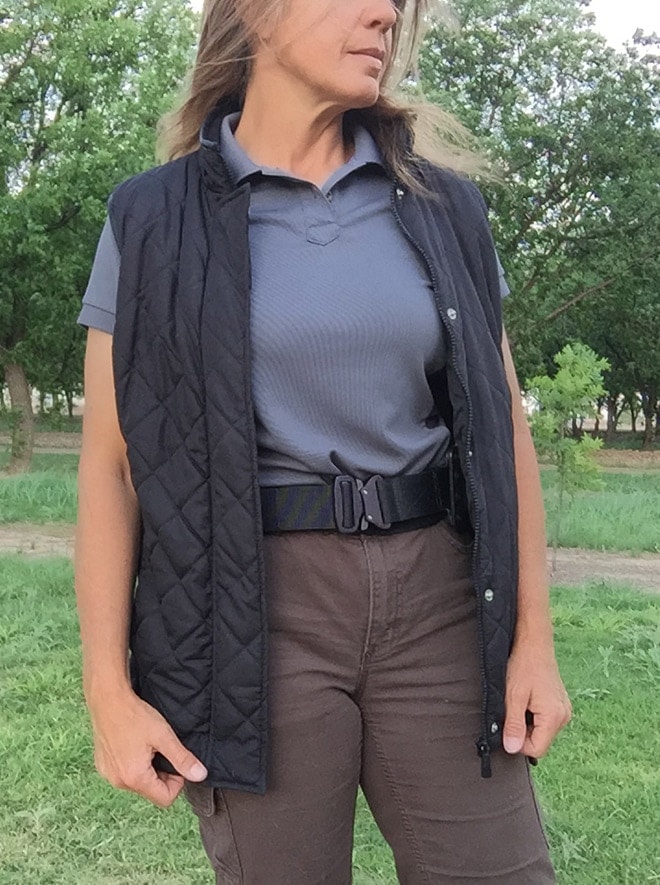 Under the vest: a duty pistol, 105 rounds in five mags and an IFAK. (Photo: Team HB)

Here in the States, HTC discovered that the same need and market demand exists. Both public figure security personnel and some segments of the citizenry feel the need to carry ammunition and supplies that will allow them effective response to threats that are less common than ones like muggings, but also appear in the news with seemingly greater frequency.

Demand for concealable security isn’t limited to male clients. HTC brought this female reviewer into their product evaluation process as part of assessing how their LPS works on a womanly frame.

The LPS I tested started as what appears to be the most common configuration. For a right-handed shooter, that includes a pistol holster, phone/whatnot pouch, an individual first aid kit (IFAK) pouch on a two-prong quick release mount — trade name being the Reduced Capacity Blowout Kit — two rifle mag holders (AK in my case) and a double pouch for pistol mags.

Other than being concealment-oriented, what’s innovative about this setup is the material and construction of the holster and mag pouches. It’s called Boltaron. Unlike Kydex, it flexes, making it more comfortable and impact resistant. It’s also temperature-tolerant, and thus less subject to becoming misshapen in summer heat or brittle in frigid temps. 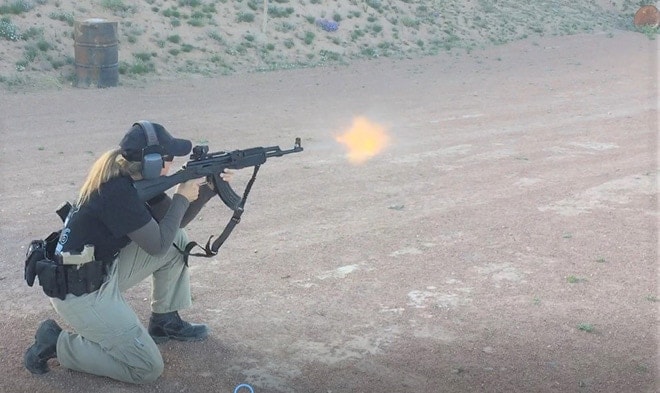 Besides the material, the cut and final touches are user-oriented.  Each pouch is hand-finished to ensure that all edges are smooth. The holster is sculpted to make it impossible to knock skin off the middle finger during the draw or reholstering. Those who take pride in the appearance of their pistol will be pleased to hear that the holster, while having excellent retention, has absolutely no slide-to-holster contact. It actually is less abrasive than leather, since there’s no abrasion at all. Retention of the pistol and carbine magazines is secure enough — turn it upside down, shake it, and nothing threatens to fall out. 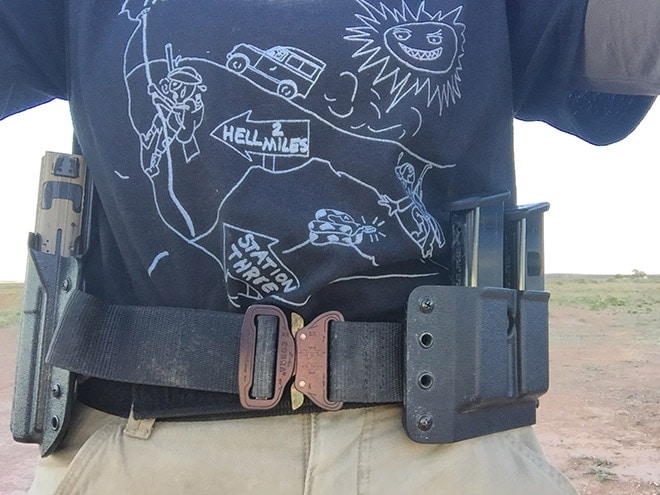 After bending from the waist, the outer belt was a bit higher that it started, but still functional. (Photo: Team HB)

The fit and functional nature of the rig varied depending on the type of pants I wore. With pants that have a moderate or low rise, the size small belt technically fit, but the setup was neither comfortable nor concealable. That includes 5.11 women’s pants. With low-rise jeans, the rig was not at all concealable, since the rifle mags and pistol, anchored on the widest part of my hips, had substantial clearance between my body and the parts of them that rise above the holster/pouches. The pistol holster’s belt loop attachment rubbed blisters on my side with lower-waisted pants, no matter if I shifted it onto bonier or fleshier parts.

A better fit was obtained wearing normal-rise women’s pants or men’s cargo pants (a staple of my range wear). Especially if I’d hike the pants up a bit to my true waist, the gear would ride high and tight, save for the IFAK. A couple range friends remarked at how high my pistol was riding; it’s definitely not a common fit.  Wearing the rig higher, but more securely, made the belt a bit long for my 29-inch waist, though, and there is some excess to be trimmed off. 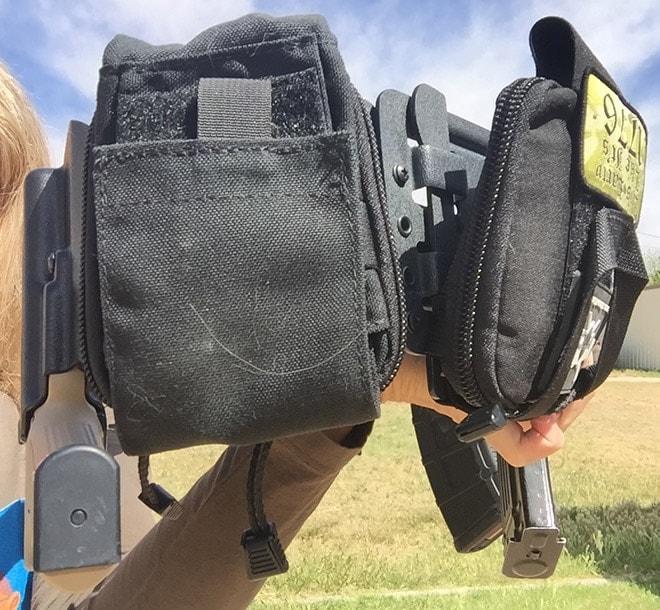 Upside down. Retention of mags and gun is stellar. (Photo: Team HB)

Although it doesn’t lend the best look when worn on the outside, I found that drawing the pistol, pistol mags, and the front rifle mag was quite doable, including on timed exercises.  Retrieving the rear rifle mag must be done with my shooting hand, with the rifle slung, and is best done as a two-handed operation. That part will never be as fast as my usual chest rig setup, but hey, a chest rig isn’t concealable.

The quick release IFAK is a great concept, and I’ve seen a lanky male shooter wear one with ease.  The first problem I encountered with it was getting a Combat Application Tourniquet (CAT) into it. The CAT would only fit diagonally, and with great effort to close the double zippers. Once it was loaded with a CAT and two other small items, the IFAK stuck out from my rear and, with a cloak on, my profile resembled the women from the “BC” comic strip.

Once misshapen by being full of stuff, the IFAK loosened itself and kept coming part of the way off during wear.  Seeing as I was also a bit short on real estate, with the front magazine and pistol being well forward of my lateral centerline, I removed the IFAK and transferred the med gear into the also easy-to-open, and narrower, phone pouch. The CAT still fits in it, so I’ve lost no capacity. A person wearing this rig for duty and needing space for a radio might think otherwise. 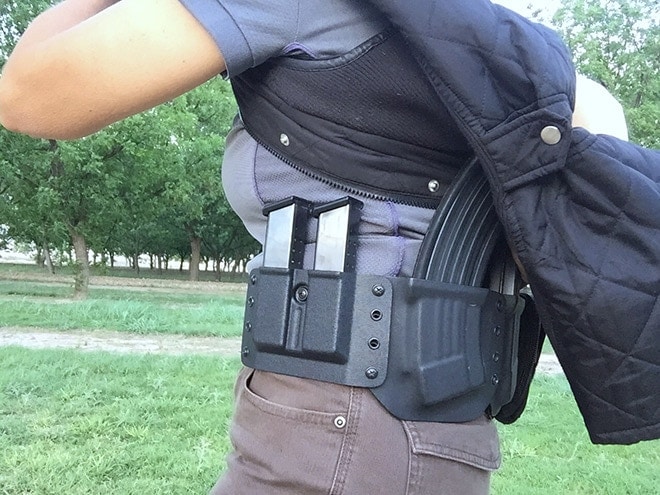 Extracting the rear rifle mag has to be done with my dominant hand and rifle slung. (Photo: Team HB)

Removing that component, a process that entailed removing and re-attaching four screw sets that anchor two belt loops, solved the fit problem. The rig is now concealable under roomy outerwear, though bending over must be done with caution, as a “shelf” can be present in back upon standing up.

I have worn this rig on several range days, with and without a concealing garment.  It’s been put through its paces on a carbine course that entails going to prone and kneeling, as well as performing reloads, on the clock. It’s done the same on a pistol course that includes kneeling and many draws under time pressure.  The HTC Low Profile System serves me well in terms of putting gun and ammo where I need them, and making them quick to access, though the gear is up high on my torso. So long as I don’t have to draw the rear rifle mag under time constraints, it’s a great and functional setup.

HTC offers several versions of this system.  Another option for concealable rigs includes an inner belt that’s a leather dress belt where the visible, front parts are concerned, but exposed loop material under the jacket. They also make a traditional battle belt for duty or competition use. 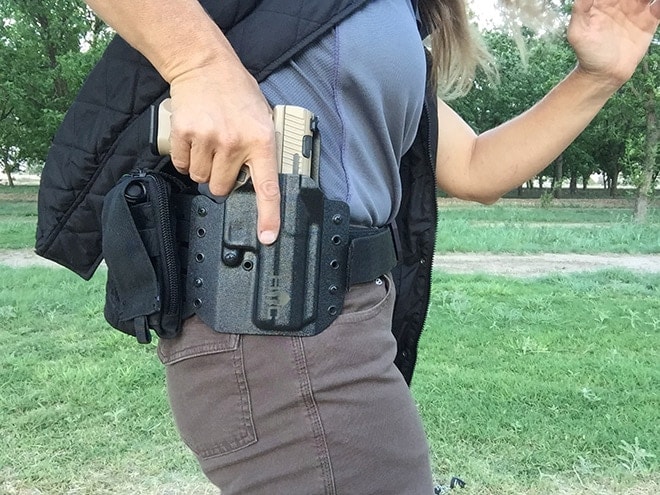 Ordering the HTC LPS is a customized process, currently dealing directly with High Threat Concealment. An impressive assortment of choices is available for pistol models and mag carry configurations.  Ordering must be done through the company’s website. Since each belt is custom made and some components are hand-crafted, expect a couple weeks between order and delivery.

The quality of components in the High Threat Concealment Low Profile System is evident in its price. In black, it’s $445. Add $60 for flat dark earth.  For the private security professional or private citizen who wants to be discreet yet prepared for demanding engagements, the LPS is the ticket.