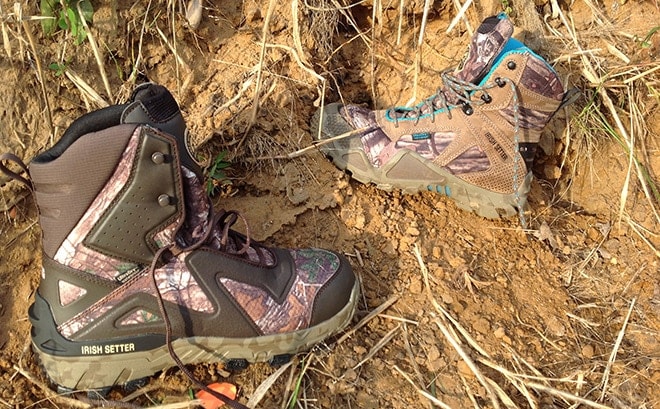 When you pair two companies with the quality histories of Red Wing and Irish Setter, expectations are high.  So it was when we received pairs of Irish Setter’s new-for-2016 VaprTrek hunting boots advertised with the “soul of a hunting boot and the sole of an athletic shoe.” 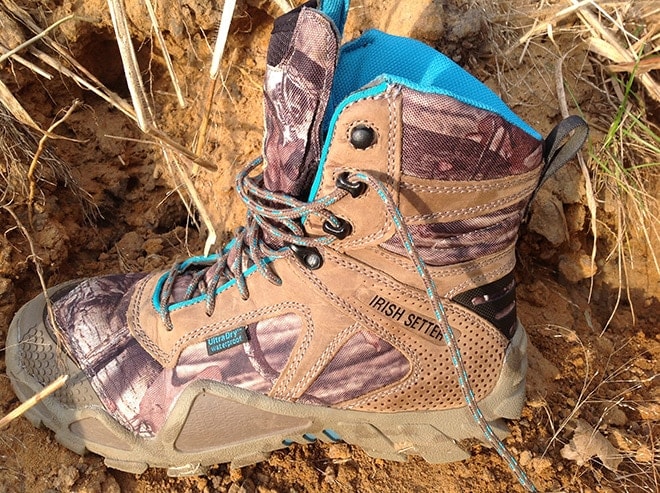 Features and terminology abound with Irish Setter.  There’s UltraDry lining that makes the boots waterproof and ScentBan scent control helps eliminate bacterial odors.  The 400g Primaloft Gold Eco insulation is made of 90% post consumer recycled plastic bottles and is ideal from late summer-to-late Fall hunting, and suits anybody with cold feel year round.  Mossy Oak Break-Up Infinity camo panels blends nicely with the leather trim and tan camo soles. The 8” boots have an aggressive enough tread for hunting without hauling excess mud, and are silent in the woods.  From someone accustomed to the “give” of worn leather boots, the VaprTrek’s are much stiffer, though significantly lighter at 2lbs-6oz for a size 10.5 pair.  The removable polyurethane footbed is not overly padded, yet is comfortable for serious hiking and athletic hunting. 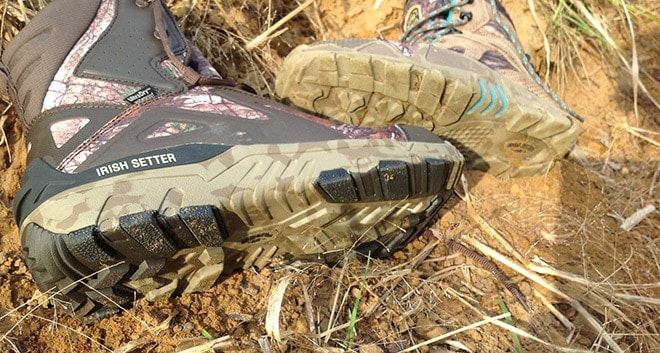 Right out of the box, sadly, the first thing we noticed about the boots was not their good looks, but the horrendous smell of synthetic meets adhesive.  In fact, it was so strong that we had to leave the boots outside to air out for almost two weeks, lest we scare off not only the deer but also nearby hunters.  This is no doubt accounted to the cement construction.  The smell did eventually dissipate, however, and from then on, it was smooth going in tree stands, ground blinds, and stalk hunts with plenty of whitetails coming in archery range. 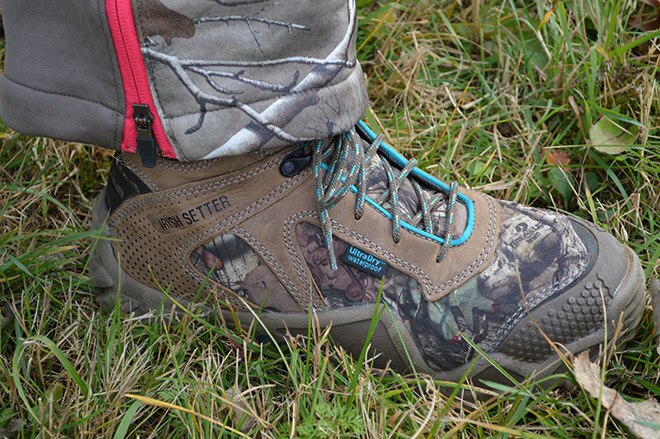 Irish Setter is a female-friendly company,  offering women’s sizes from 5M-11M.  Our test boots came in size 10.5 and fit perfectly, though I wear a 9.5-10 in athletic shoes and other boot brands.  The boots require little to no break-in time, and are a capable hunting companion.  Our test model (2881) retails for $164.99.

In addition to the baby-blue trimmed 400 gram insulated model, Irish Setter also offers a VaprTrek uninsulated model (2862), which has pink trim and retails for $154.99.  Ladies looking for other styles of boots will find numerous Irish Setter women’s offerings from heavily insulated pak-style hunters to rubber swampers.  Though the pink or blue trim is probably not necessary, kudos to Irish Setter for offering serious lady-hunters plenty of options. 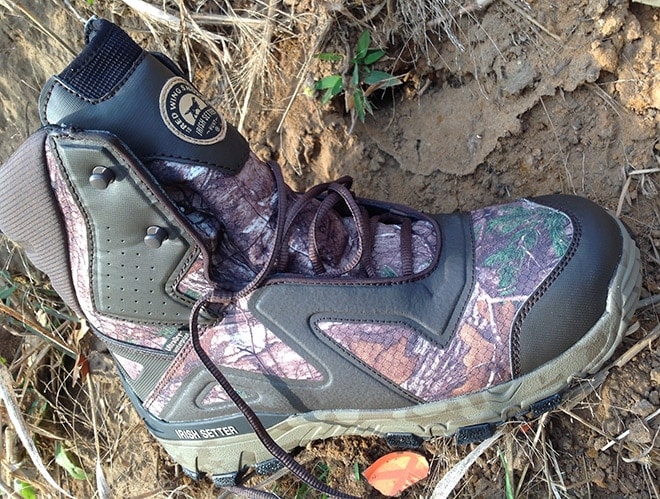 Though the men’s VaprTrek LS has a slightly different style than the women’s boot, they are nonetheless in the same family.  With a nine inch height and 1200g Primaloft Gold Eco recycled insulation, the LS is ideal for still hunters sitting on stand in the coldest climates.  Even with all that insulation, however, the boots are some of the lightest and least-bulky cold-weather boots we’ve seen, weighing in just over three pounds for a size 11. 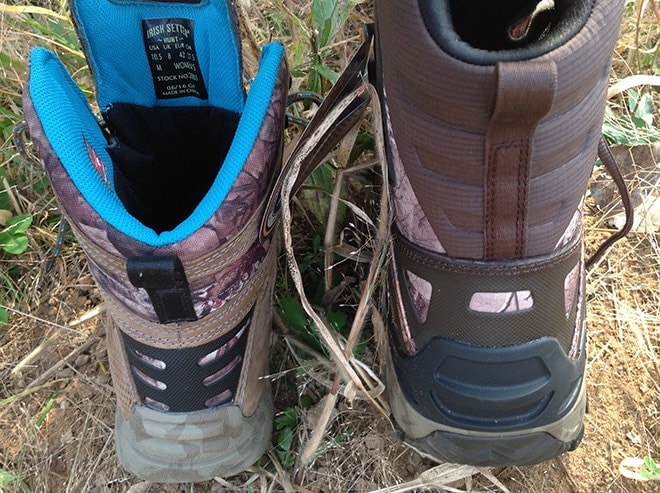 Like the women’s model, this is a cement construction boot with the same UltraDry and Scent Ban properties.  This one wears Realtree Xtra camouflage with darker leather trim and a muted camouflaged sole. The footbed is removable comfort cork with memory foam, making it feel considerably softer than the women’s VaprTrek.   Men’s sizes are available in both Medium (D) or Wide (EE) from 8-14 with half sizes.  Like the women’s model, our reviewer had to order a full size larger to allow for hunting socks, and would have needed at least a half-size larger just to get into the boots. 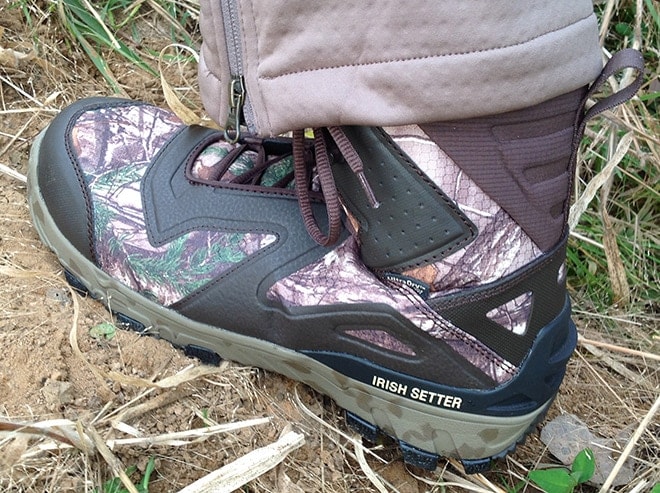 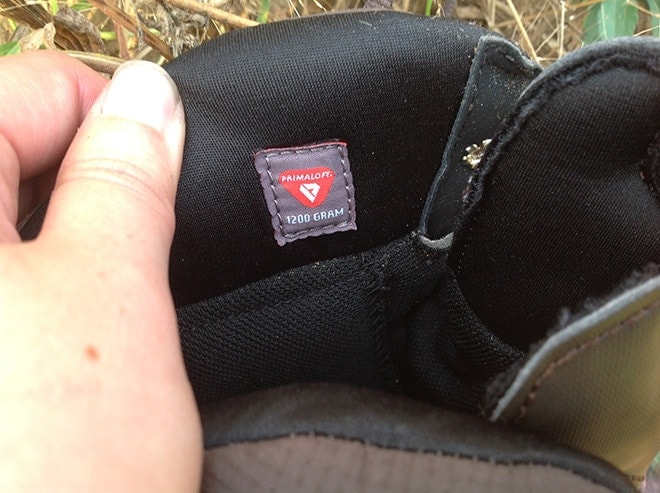 Again, there was an adhesive smell when these boots came out of the box, but that dissipated in a couple days in the house and was nowhere near as intrusive as the women’s model.  Though mother nature didn’t provide the coldest temps, we did wear the 1200g VaprTrek’s all day on stand in 20-30 degree late-November Midwest weather, and the feet stayed warm and dry.  The boots are warm enough to sit comfortably and light enough to hike easily, unlike bulky pak boots.

Our test model (827) retails for $199.99.   In addition to our test boot, Irish Setter offers men’s VaprTrek boots in ten other styles, from an 8-inch uninsulated that looks like a twin to the women’s model, to 17” snake boots. 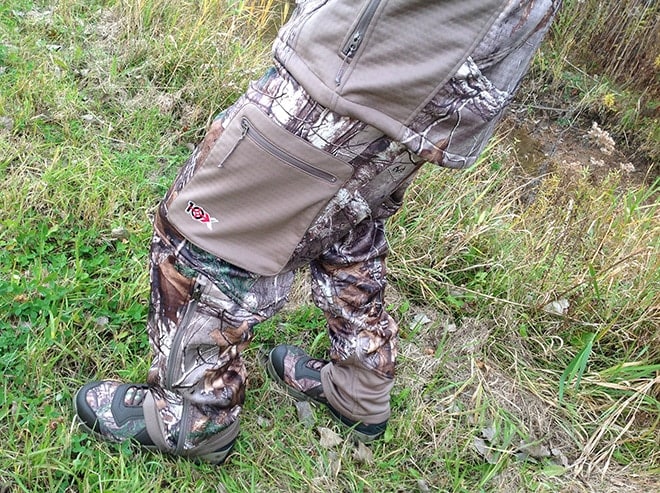 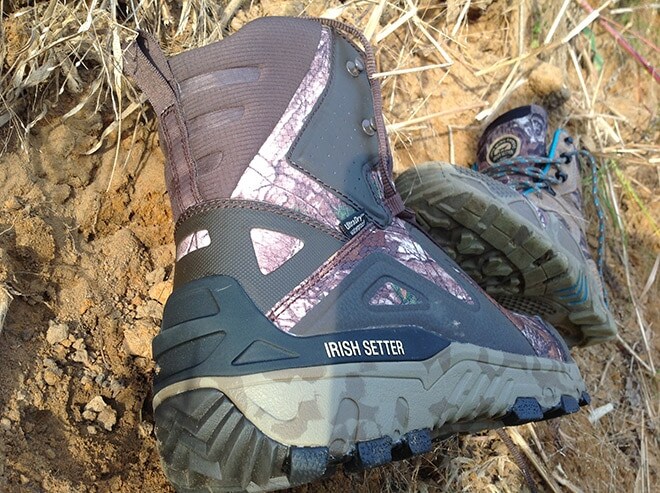 Though the Irish Setter VaprTrek boots are made in China, we were very pleased with their customer service. We needed to exchange for a different size, and our communication was promptly answered, and within a week, we had returned the original and had the new one in hand.

All in all, both the men’s and women’s boots get the job done.  In fact, the biggest testament is that we never thought about our feet during any of the hunts, as both the comfort and the warmth were spot-on.  VaprTrek boots are indeed lightweight and ready to drive the serious hunter.