The Kel-Tec P3AT, a diminutive pocket rocket, defines economical concealed carry.  The little .380 is about as small as a .380 can get, allows for an economical use of available space and it doesn’t cost much either.  New, the P3AT sells for around $300, give or take.

Yet the P3AT makes sacrifices.  The barrel, at 2.7 inches, is purposefully short.  It doesn’t need range, really.  The P3AT doesn’t need much in the way of sights, either.  It is an easily pointed at its intended range, which I would say was less than 10 feet. 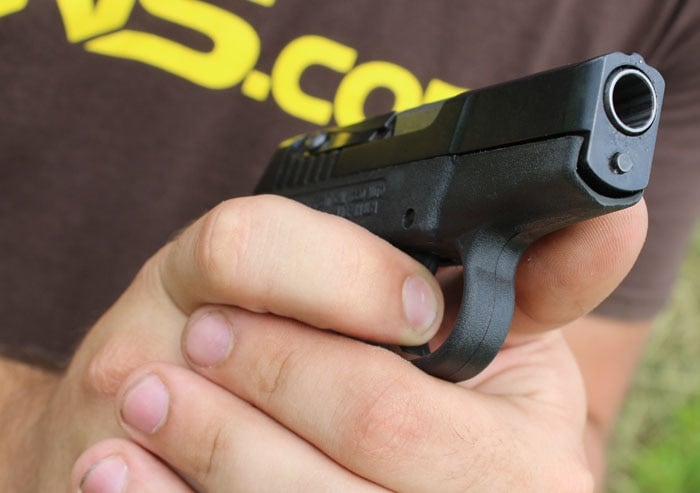 At just over 5-inches long, the gun is easily tucked away in a pocket, but it is painfully thin.  The single stack magazine, which holds six rounds, doesn’t allow for much of a grip.  Shoot a few magazines through the pistol and you’ll feel the tension in your hand.  It isn’t a byproduct of recoil directly — the pain develops from holding the gun so tightly.  While a wider grip would make the gun easier to hold, it would defeat the purpose.

Does length help?  We picked up some additional magazines for the P3AT and put them to the test.  We had three basic questions in mind.  How well do they work, do they improve the way the gun shoots, and how well do they conceal?

How well do they work?

I expect the occasional failure from a polymer pocket gun.  Some are picky about the type of ammo you feed them.  One of these P3ATs ate extractors.  We never did figure out what the issue was.  Kel-Tec sent us a couple of replacements and then we sent it back to the factory.  It was repaired and immediately returned and we haven’t had an issue with it since. 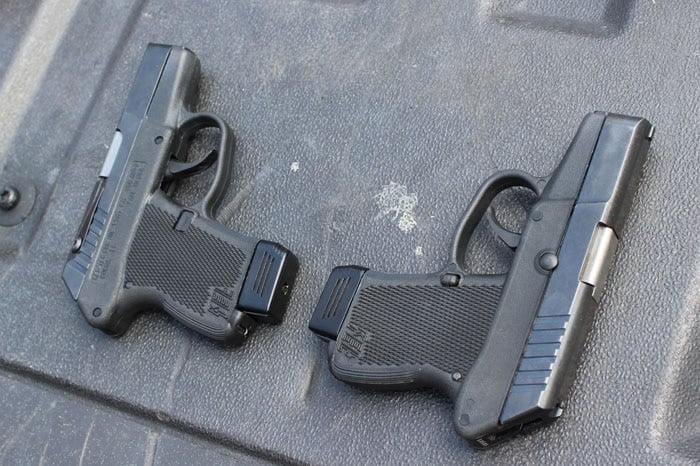 But that clearly didn’t have anything to do with the magazine.  The six-round magazine that is supplied with the gun works very well.  The seven-round extension is simply a polymer piece that replaces the floor plate of the six-round mag, and a new spring.  It worked just as well.  My fear was that the extra tension on the spring (when fully loaded) might cause failures, but it did not. 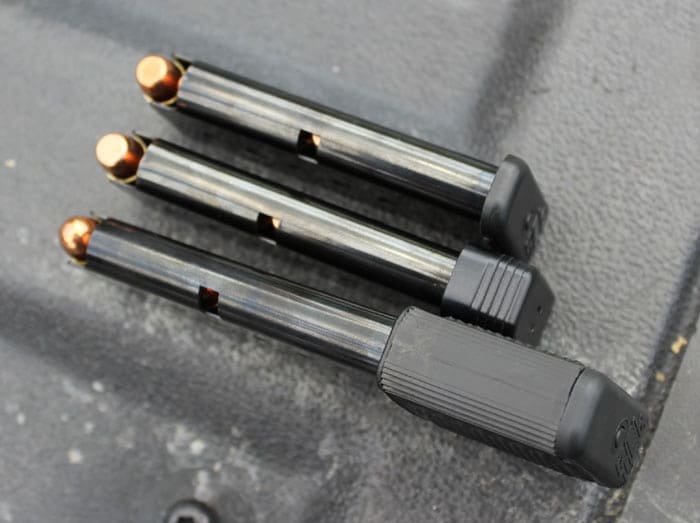 From top to bottom, the six-, seven- and nine-round extended magazines. (Photo by David Higginbotham)

The nine-round magazine is a whole separate unit.  It presumably has an even longer spring.  It worked very well.  All three of the magazines functioned reliably.  They fed in with little difficulty, and dropped free with a bit of a shake.  They load easily and are, I wouldn’t hesitate to carry any of them.

Do they improve the way the P3at shoots?

Yes.  I think I can say that for all three.  Even the six-rounder improves the way the P3AT shoots.  Without a magazine, the pistol doesn’t run too well.  Other than that, though, the flush fitting magazine isn’t a factor in the ergonomics of shooting.

I can get my finger on the trigger, my middle finger on the grip, and my ring finger about halfway on at the bottom.  I’d call it a 1.5 finger grip. 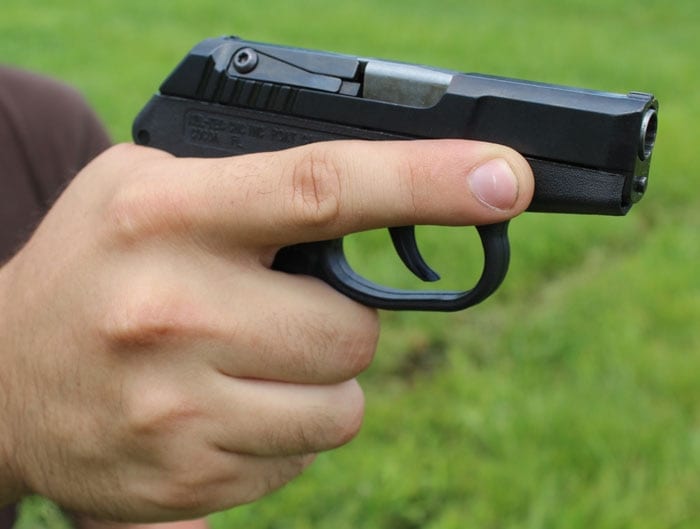 What we call a 1.5-finger grip with banana hands. (Photo by David Higginbotham)

The seven-round extension allows for one half of one of my fingers to be added, bringing my grip up to a solid two finger grip (three if you count my trigger finger).  Those two fingers are more than sufficient for holding onto the gun.  Not comfortable, but functional.

If you don’t have decent hand strength, Kel-Tec offers finger extensions that will add a curved finger groove to the bottom of the 6-round magazine (but not any extra capacity).

But here’s where the nine-round magazine is king.  It is great to shoot, as it lets you get the pinky into the action, too.  The poor neglected pinky.

How easily are they concealed?

This one isn’t rocket science.  The bigger the magazine, the harder it is to hide.  But let’s be real.  The six-round mag in the gun makes the whole pistol only 3.5-inches tall.  That is roughly equivalent to most cell phones.   It hides as easily as any other .380 on the market. The Kel-Tec P3AT in a DeSantis holster, left, and one in a Recluse holster, which also holds a spare magazine. (Photo by David Higginbotham)

The added round, though.  What if you needed it?  The extra half an inch can’t be that hard to hide.  And it isn’t.  Most holsters are open below the grip (like this DeSantis, above left), so that extra length isn’t actually coming in contact with anything.  The exception is my favorite pocket carry holster, from Recluse.  It is built for the six-round mag.  The seven round fits, but distends the edge.  It doesn’t make that big of a difference, honestly.  The other benefit of the recluse is that it allows you to carry a spare magazine.  As you can see above, the Recluse has room for the P3AT with a loaded 6 round magazine, and room (conveniently) for the seven round mag beside it. 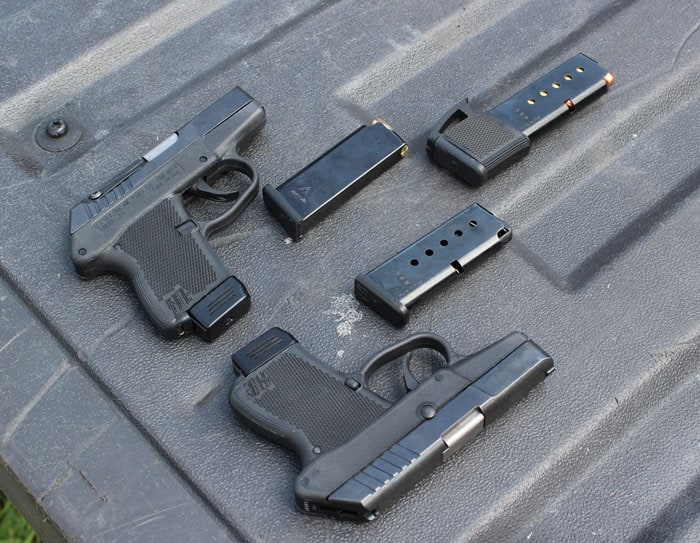 The nine-round magazine, though, I can’t find a good way to carry it, yet.  It simply protrudes too much.  If I’m going to carry something that long, it will be a bigger gun.  But the nine round mag fits nicely in the pocket of a pair of jeans, as a spare.