There’s nothing like the joy of the holidays.  The only thing better may be that calm that comes immediately after.  It doesn’t last long, though.  You have to return all of the bogus gifts you received, and fight through the hordes of people at the customer service desk just to get store credit at a place you’d never shop. 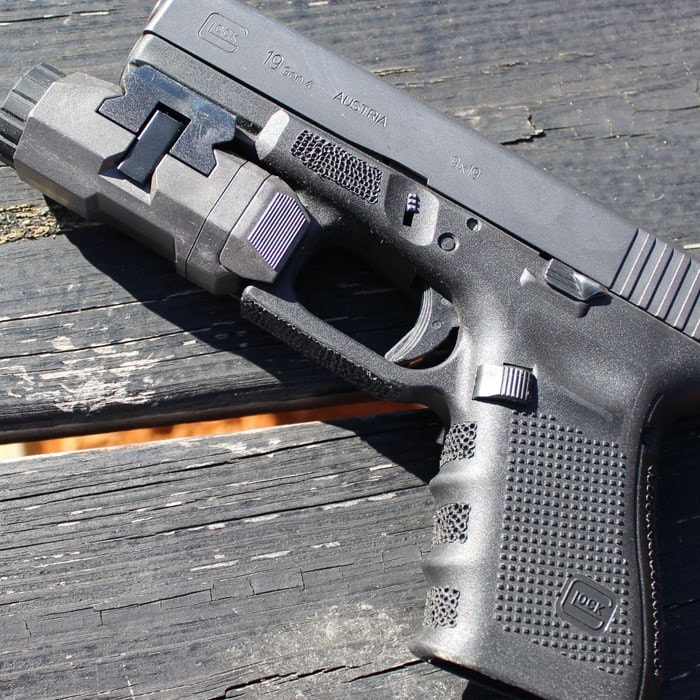 A Glock 19 with an Inforce light. Very Useful. (Photo by David Higginbotham)

No that can wait.  Better to stay in and kick back with a little browsing on the internets.  My strategy is to take a look at everything I’d wanted (or hinted about) and start putting together a modest purchase that’s just for me.  As very few (actually none) of the gifts I received this holiday season are gun related, that’s where I start.  And since a gun isn’t much use if you can’t carry it, I like to start with holsters.

A friend of mine found turned me on to KT Mech.  He’s a contractor and is on the job site at some odd times.  He’s always carried concealed, but has moved away from the mouse guns in favor of a Glock 19 and a light from Inforce.

When he let me test drive his KT Mech Defender, I liked what I saw.  They make versatile Kydex holsters that have a lot of attractive options.  Their Defender model is an effective way to carry a larger pistol outside, or in the waist band.  With the right combination of gun and light (or laser, or both), the Defender offers ease of access and excellent versatility. 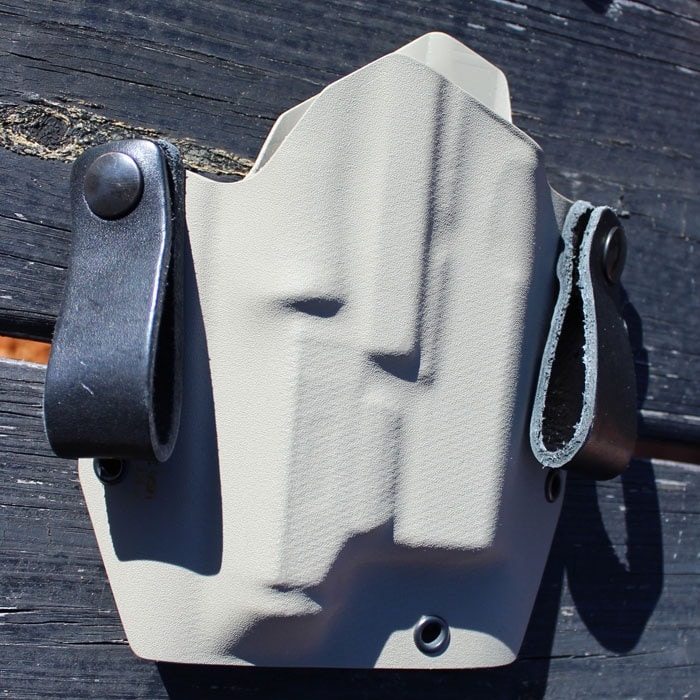 The Defender with soft loops. (Photo by David Higginbotham)

The Defender can be a sizable slab of Kydex, but don’t let that turn you off.  It comes with rigid OWB style loops, but you can get soft loops for IWB carry when you order.  The wide sides and length are all hidden when the holster is tucked away.  And that extra real estate allows for this IWB holster to be converted to an outside the waist band model with hard loops, or with quick detach loops.  You can even put it on a leg rig.

With that kind of versatility, one holster will fit multiple needs.  This is a huge benefit as you won’t have to get used to multiple holsters for different positions.  Carry with the IWB model, go to the range with a OWB.

In the interest of a fair review, I’ll mention that I’ve borrowed this one from a friend.  That’s how much I liked it.  Usually we will have companies send us samples to beat up and put through torture tests, in case we really wreck it.  And we’ve put this one through the same treatment, and it has performed admirably. 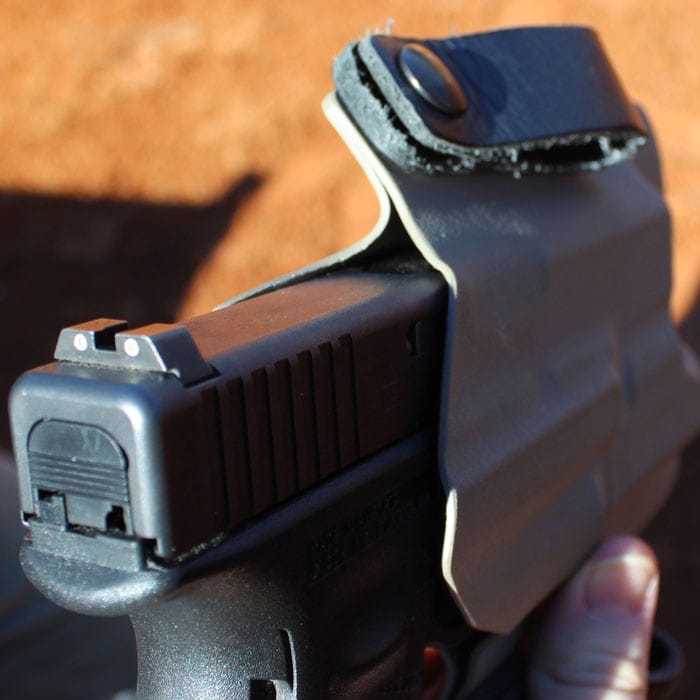 The Defender provides a sung fit for good retention. (Photo by David Higginbotham)

The lip on the top of the holster has a slight roll on it, a barely noticeable bend.  It is minute, but makes getting the Glock into the holster much easier.  That’s a pet peeve of mine that I’m paying more attention to lately.  It is imperative that the gun come out of an IWB holster reliably.  It is nice when it goes back in easily, too.  Even better when both happen flawlessly.

The Kydex on this model is a bit thinner than some that I’ve seen, and KT Mech offers holsters in two thicknesses (standard and “duty grade”.  They offer the typical line up of colors and patterns, and can accommodate pistols as large as 1911s and tactical .45s on down.  When I read up on their available models, I thought they were being a bit ambitious.  It isn’t easy to conceal a full sized 1911.  But after seeing the holster, and how the bulk of the clips is spread out, away from the bulk of the gun, I get it.  It isn’t optimistic at all, as long as there’s sufficient cover from a coat tail or the like.

The only draw back we experienced came from putting the gun on under a shirt, and having the handle up against bare skin.  There’s nothing there to keep the stippling on this Glock from scratching skin.  While this is not all the fault of the holster, it is something that other IWB holsters (though not many made of Kydex) provide.

The Defender hides well and allows for fast access. (Image by David Higginbotham)

The KT Mech Defender is modestly priced.  A Glock 19 Defender starts around the $50 mark, and goes up depending on options.   That’s much less than some of the Kydex on the market.  A Defender with for an Inforce and a Glock 19, a mag pouch (KT MEch makes those, too), and some extra belt loops.  That’s an easy decision.