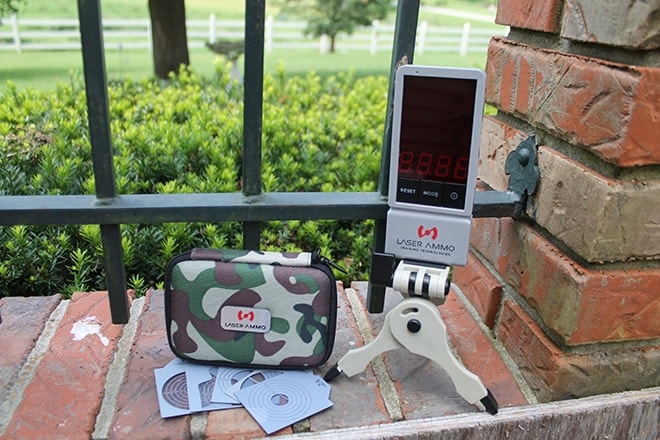 Dry firing at a door knob or light switch will improve on the fundamentals, but let’s face it, there’s nothing entertaining about that. Laser training, on the other hand, facilitates that necessary practice while adding a little fun factor.

Laser Ammo definitely has the right name, but I was curious to see how some of their products measured up. The company sent me their Ultimate Laser LE package, a P.E.T. target and access to their Smokeless Laser Range. 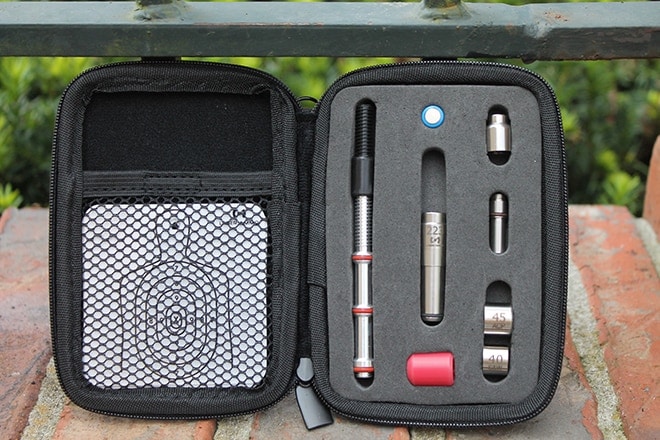 The SureStrike Ultimate kit comes with 9mm, .40, 45 ACP, and .223 adapters as well as an extender rod, battery, and targets. (Photo: Jacki Bilings)

Complete with camo carrying case, the SureStrike ultimate edition in Laser Ammo’s arsenal gives shooters a variety of cartridges to choose from. Geared towards shooters with rifles and handguns, this package touts 9mm, .40, .45 ACP and .223 interchangeable laser cartridges. The kit also comes with a short pipe, extension pipe and nut, battery, user guide, and reflective targets.

The cartridge is intuitive to put together and easy to use. Once you’ve decided on caliber, fit the parts together. Unload your firearm and lock the slide to the rear. I always like to do a second safety check verifying my chamber and barrel are clear. With the slide still locked back, insert the cartridge into the barrel. 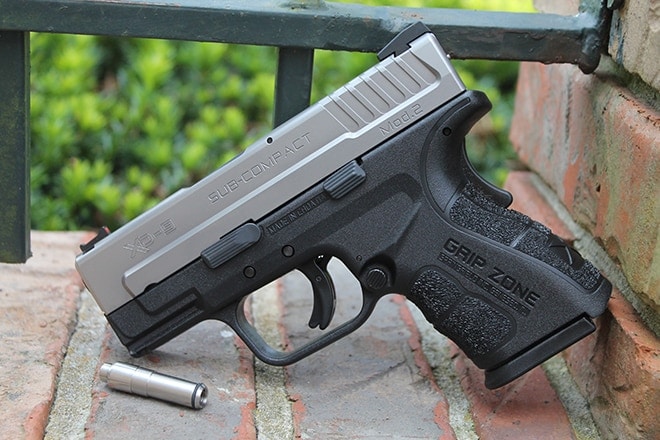 The cartridge comes with adapters to fit common calibers, to include 9mm, and .45 ACP. (Photo: Jacki Bilings)

Normally I let my slide drop naturally with gravity, but out of fear of breaking something on this device, I put her back gently. It was unnecessary as a few rounds of racking and firing with my Springfield showed that both gun and cartridge hold up fine to abuse. When laser time is complete, the safety extender can be used to clear the barrel.

As someone who totes around a lot of training aides, I like the thought of one package that can serve four calibers. For $199 the SureStrike ultimate edition is the best bang for your buck.

Along with the ultimate kit, Laser Ammo sent their LaserPET target. The PET stands for personal electronic target and that’s a perfect description for this little training aid. Compact in size, it’s about as big as a smartphone and sits on a tripod stand. Included in the box is a stack of targets that fit inside a slot to give shooters a variety of items to shoot. 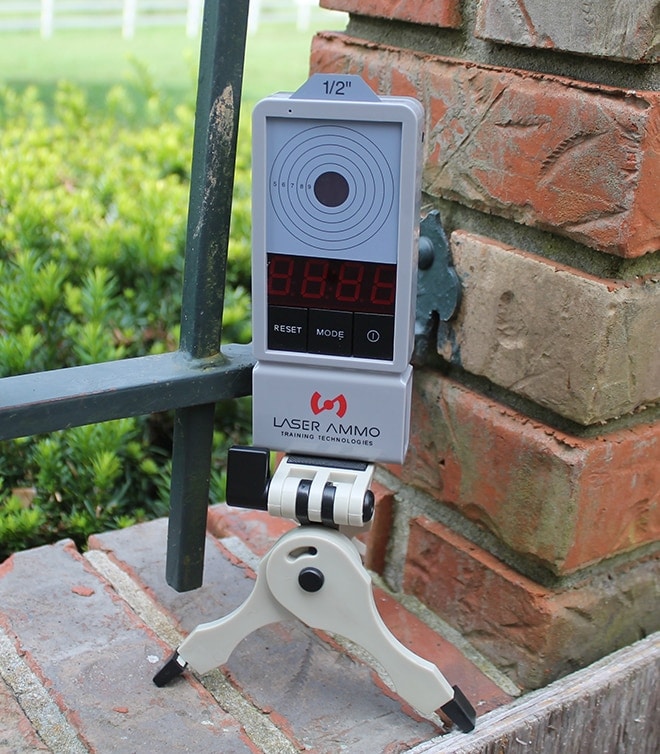 Targets can be switched out using the slot in the LaserPET target. (Photo: Jacki Bilings)

The target has three modes. P1 is a hit counter and does exactly what it sounds like. Set the target up and go to town shooting at it while P1 counts your consecutive hits. P2 is a shot timer. The system will flash and beep signaling it’s time to shoot. The timer will only stop once a shot is fired on target. Score is shown for a few seconds before the program resets for round two. If you’re looking to improve your speed, P2 is the program to use. P3 is all about quick shooting. Land as many shots on target in five seconds. Alternatively, you can practice a magazine change before firing as many shots as possible. Technically, that means that P3 is one mode with two practice options.

What I liked about this laser target is its simplicity. It’s easy to use, easy to set-up and easy to cart around. I could see myself stuffing one of these in my purse and taking it for practice while on trips. If you’re the type that prefers static targets, the LaserPET will fit right in. It retails for $119.95. 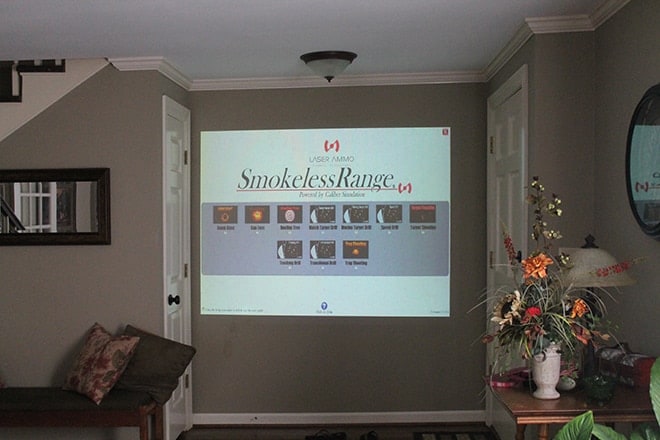 Laser Ammo’s Smokeless Range Software is a full suite of ten exercises with a bevy of activities. Each one has its own character and flavor. The activities have some customization, allowing for distance changes, time preferences and targets to be selected. 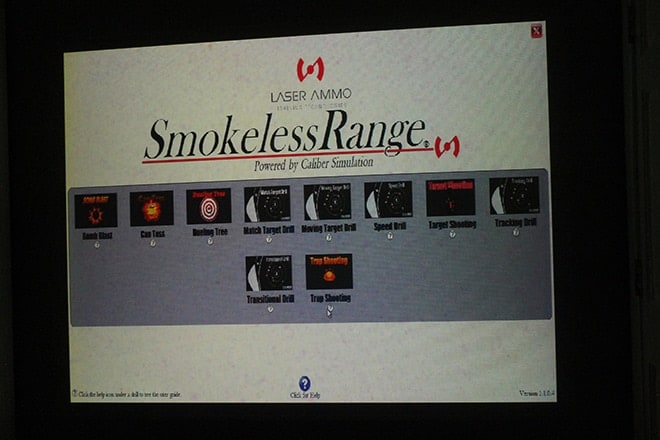 The advantage to this software is the diversity of drills. I was able to easily switch from a speed drill to a tracking drill then to reactive target shooting. If I wanted some fun, I switched over to trap shooting, can toss, or the bomb blast. Two shooters can even get in on the action with the dueling tree. Hit your targets before your opponent and you win! It’s the ability to be both fun and serious that makes this software stand out. 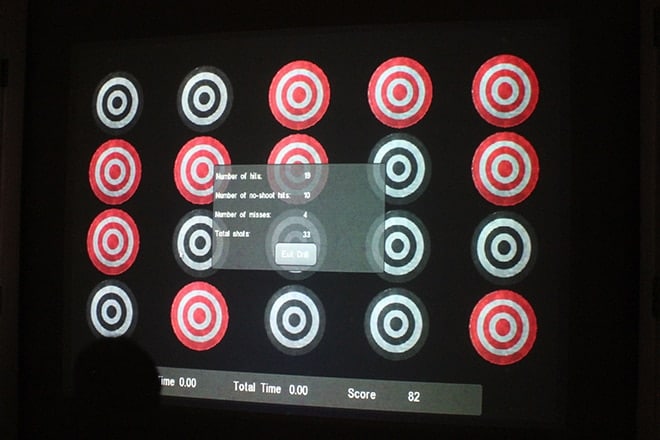 Launched recently, the Open Range is an add-on to the Smokeless Range setup. It offers users the ability to set up custom ranges. If you’re a control freak like me, you’ll revel in the ability to customize your dry fire experience. From background images to targets to the style of shooting drill, I dialed in exactly what I wanted. As an instructor, I see this being especially useful for classes that may require drills outside the normal “square” range. Concealed carriers will benefit from speed and shoot/no shoot drills, which really makes the Open Range worth the extra money. 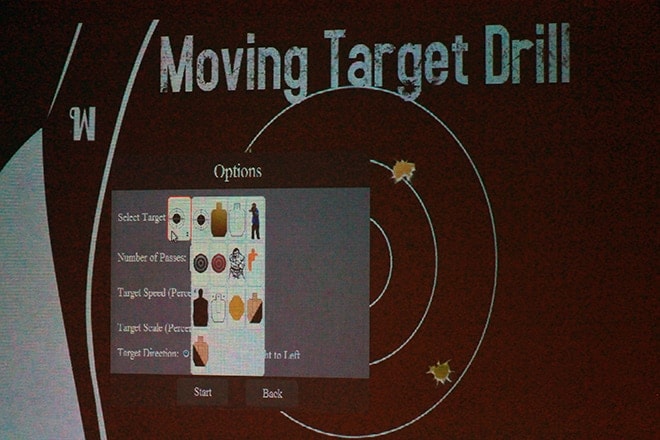 The range program is three dimensional in the sense that Laser Ammo strives to give users a realistic experience. From reactive targets, to the pew-pew sounds, the software aims to mirror range time. A note on those pew-pew sounds, though. The shooting sounds are slightly laughable, sounding more like a midi file from the early 2000’s than a real gun. If you can ignore that, or turn your speakers down, it won’t ruin your practice time. 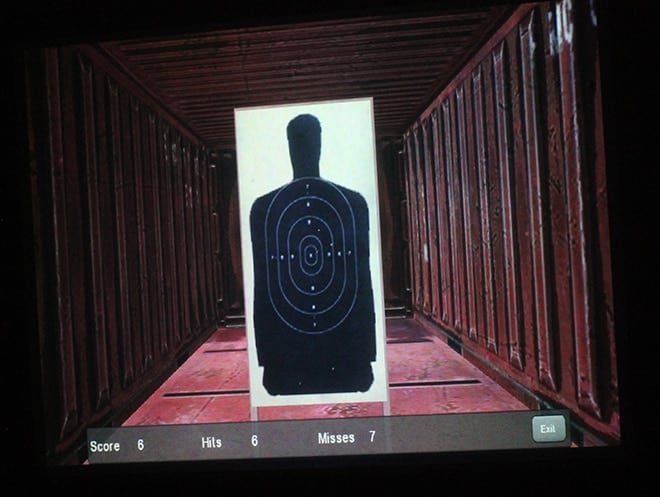 Target shooting is even included in the Smokeless Range. (Photo: Jacki Billings)

The software is compatible with Windows systems; however Mac users are left to dual boot or find a friend with a Windows computer. With most of us Mac users dual booting, I doubt this will really be a sticking point but it’s worth mentioning if you are solely dedicated to the Mac platform.

Though a TV can be used with the software, it really does perform its best alongside an actual projector. I tried both methods and found that it was easier to calibrate and I had a better picture with a projector. If you don’t have one in your arsenal, nab a cheap one off eBay or Amazon. 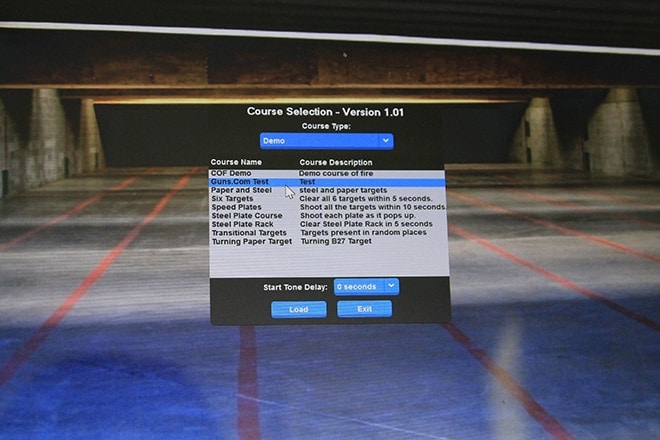 Custom create your own range via the Open Range add-on. (Photo: Jacki Bilings)

Now to the price: $399 will get you just the Smokeless Range software and camera. The Open Range add-on is an additional $250. Though the ranges are pricey, when you factor in what you could save in range fees and ammo, it all starts to even out. If the cost does have you a little leery, Laser Ammo provides a free 15 day trial of the software via their website. You won’t get the full experience due to the lack of hardware, but you can at least see the programs and understand the functionality. 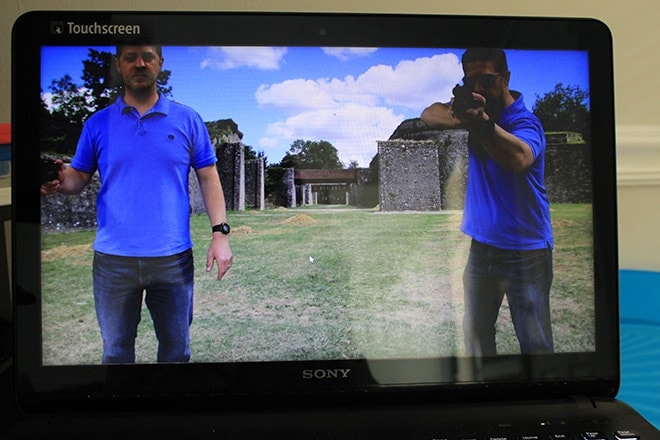 While the LaserPET is a nice little target, I’d prefer to save that money and put it towards the Ultimate kit and Smokeless Range software. The two, both solo and in combination, were standouts for me and worth their price tags.