Law Tactical is a company with an exceptionally bright future.  They’re new on the AR-15 scene, but it has been an impressive debut.  Their AR-15 Folding Stock Adapter is a simple hinge that screws in between the upper and the stock.  That’s it.  The idea is simple.

Yet the stock adapter could hardly be described as simple.  The piece is well engineered and solidly built.  The body is hard anodized aluminum.  When closed, a substantial steel clasp holds it securely shut.  The tension on the hinge can be adjusted by the user.  And, to top it off, there’s a QD sling attachment point built into the bottom of the hinge.

Why would you want a folding stock on an AR-15?

The answers vary, but here’s an example.  The gun below is a Colt lower and a Troy upper.  The barrel is a bit over 7 inches.  The Magpul stock collapses, but not enough to get the whole gun into the 5.11 Covert Triab backpack.

But with the Law Tactical adapter, the stock folds up.  The gun becomes a very compact passage that will fit in almost any backpack.

This makes concealment easy.  It allows you to take an SBR anywhere.  If nothing else, the adapter makes getting a rifle in and out of your house less conspicuous.

The Law Tactical adapter makes life a bit easier for folks like me.  But its real appeal is for law enforcement and military.  Anyone who has ever wrestled a carbine into a car knows what I’m referring to.  It is one thing to toss a rifle into the backseat, but another to keep a rifle ready inside a vehicle.

The answer, up to this point, has been the limited advantage offered by collapsible stocks.  But now we have an option. 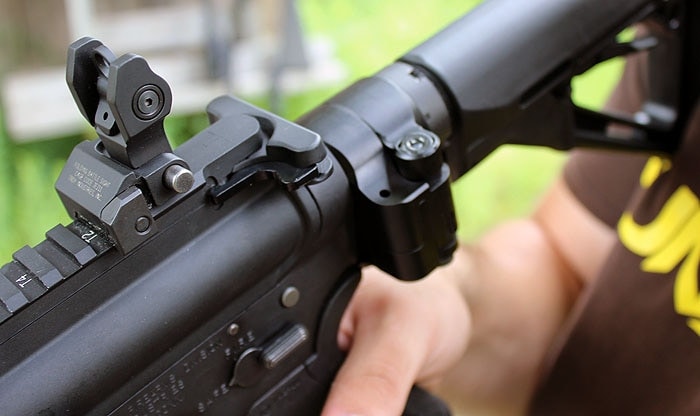 There are two issues with the Law Tactical adapter that require a bit of special consideration. 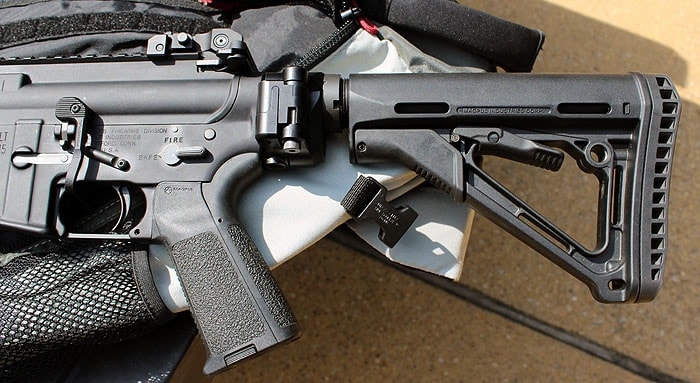 But, as you can see in the photo below, it is only an issue on the left side (the hinge side) of the rifle.  This is easy to address.  With less finger on the handle, the problem is solved.  I will eventually pick up an over-sized handle, which will solve the problem completely.

This isn’t to say that the hinge is obtrusive.  Far from it.  It ads very little to the overall length, and couldn’t be any thinner and still offer the secure connection that locks the stock solidly in place. 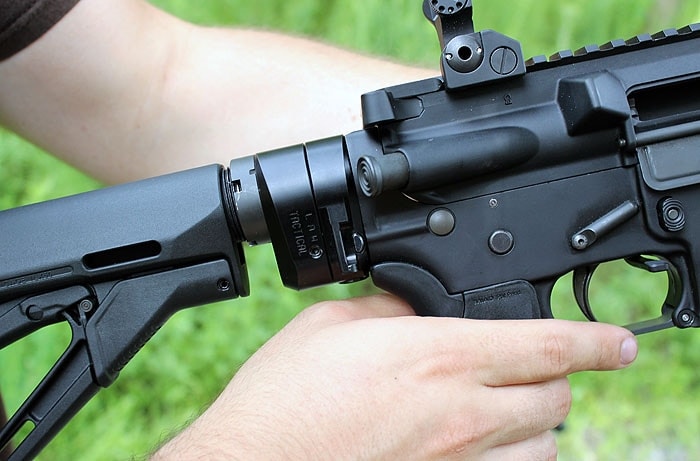 The other potential problem with the Law Tactical stock adapter is inherent in the design of the AR-15.  If you pull the trigger, the gun fires.  It doesn’t matter if the stock is folded, or off.  The bolt carrier rides back into the buffer tube, which is in the stock.  That’s why we haven’t been able to fold the stocks.

What happens when you pull the trigger with the stock off?  Something has to give.  There’s a steel locking finger that will hold back the bolt and keep it from knocking back, but that means the pressure needs to be redistributed.  While it isn’t a life-threatening safety issue, it may not be good for the rifle. 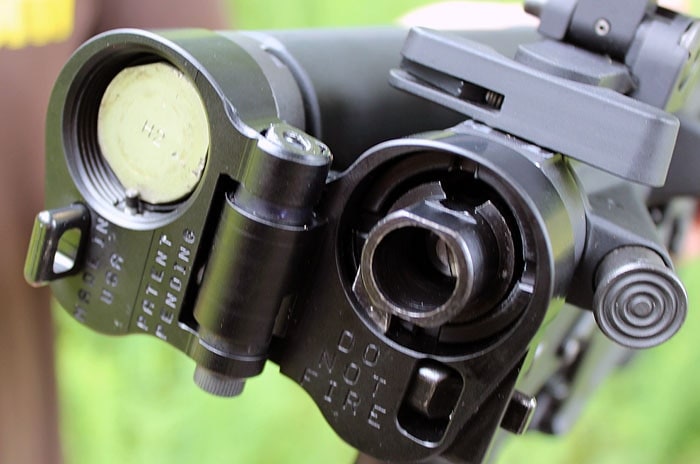 The adapter is clearly labeled “do not fire.”  But it is up to you.  Resist the temptation to shoot from the hip with the stock folded.  Guns can be dangerous.  You don’t have to be.

The adapter is being sold for $199, but it is money well spent.  The adapter can make storing a varmint rifle easier.  It can make transporting carbines much less cumbersome.  The SBR becomes even shorter, which is the whole point.  It cuts out space in the safe, in the car, the helicopter or plane.

Every AR should have one.  And keep your eyes on Law Tactical.  They’ve got a patent application in for the adapter.  Right now, their website has only two products: the adapter and a t-shirt.  I can’t wait to see what comes next.