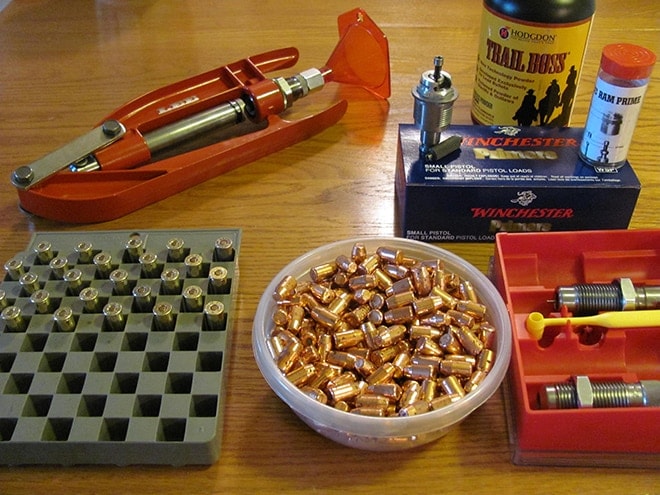 To start reloading can be a daunting venture. Even for long-time shooters, there’s lot of hurdles to overcome. If you don’t know any reloaders, you have to make a series of choices in equipment, components, and so on before you even get into the process… and then you might not enjoy it. Because of this, there is a market for low-cost ways to enter the reloading game and try it out.

At the bottom end of the scale, the Lee Loader has you banging together ammo with a hammer. For those looking for something more lavish and expensive, there’s a myriad of single-stage presses out there, including starter kits. But today, we’re looking at something that fits in its own category. 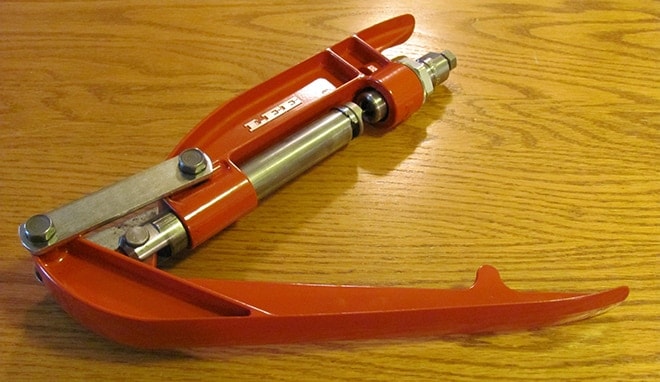 The Lee Breech Lock Hand Press is a little contraption that distills the essence of a single-stage press into a portable hand tool. Using it and a few smaller tools, you can conduct the entire reloading process with a kit the size of an ammo can. This makes it stand out from other single-stage presses, and it has a range of ups and downs consummate with its unique position. I’ll be looking at its utility for both the new and veteran handloader in this review.

The Hand Loader is a solid chunk of metal, weighing in just under 2 lbs and sitting 11.5” in length. The three main parts—the body, handle, and ram—are all held together by heavy-duty link work with generous tolerances. This is a positive during reloading, as you might have to exert a lot of force on the handle, which can result in a bit of twisting (especially with longer rifle cartridges). The ram guides, by contrast, are super-precise with no wiggle room. This translates to the same mechanical precision as a mounted single-stage press. The ram also doubles as a primer tube, holding about 40 small and 25 large spent primers as you resize cases. The ram has a small port cut into it to accommodate your shell holder. This setup works fine—I’ve never had a shell holder drift out in thousands of rounds. 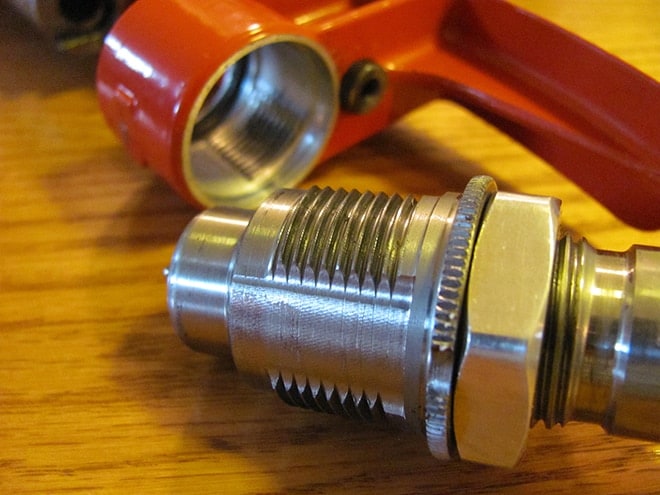 Above the shell holder is the actual Breech where your die is held. This uses Lee’s Breech Lock system that allows you to quickly change bushings in and out of the press, holding them in with a little button on top of the press’ body. With a few Breech Lock rings, you can set up your dies so instead of screwing them in and out (a tedious but necessary process in single-stage reloading), you can simply drop them in and out. It’s a handy feature you can ignore to save a little money.

The body and handle have a durable red finish, while the ram is stainless. This finish has proven pretty durable over two years of near-constant use.

All considered, this is a well-made, sturdy product.

The Hand Press operates like any single-stage press. This means as far as the use of the press goes, every round is going to get pushed up the ram a minimum of three times—four if you use the Ram Prime (not recommended) and five if you use the Factory Crimp Die (highly recommended).

The nature of the Hand Press is that it will be less stable than a typical mounted press. One of the hallmarks of traditional reloading presses is the need for a solid mount, allowing to user to exert minimal effort and letting the machine do the work. The Hand Press throws this axiom away and instead depends on the user to create mechanical forces, and has only as much stability as your arms can provide. This is clearly the product’s biggest shortcoming. 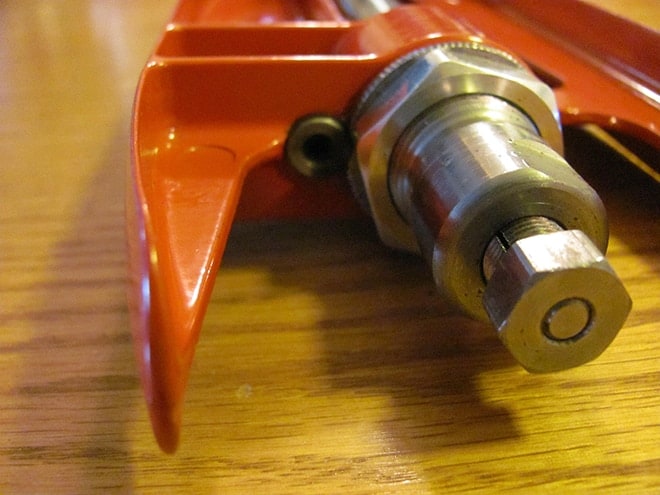 The conventional wisdom of solid mounts holds up when you first try to resize a large rifle cartridge like a 30.06. That long case needs to be forced through the sizing die entirely on your own power and it will resist, regardless of how much case lube you drench it with. It’s not a nightmarish wrestling match, but smaller people and particularly those with arthritis may find this product impractical.

Another time the stability is sorely missed is when charging the case with powder. You have to push the case into the power-through die, hold the Press upright, scoop your powder, potentially weigh it, place it down the funnel, then extract the case from the die being careful not to tilt anything too far or risk a spill. I’m not an uncoordinated slob, but I’ve definitely spilled more than one case, and I’m sure I’m not the only one.

Of course, this “fault” is hard to hold against the Press because it’s obviously going to happen. Presses are mounted for a reason. Holding these issues against the Hand Press is to hold physics against the product. 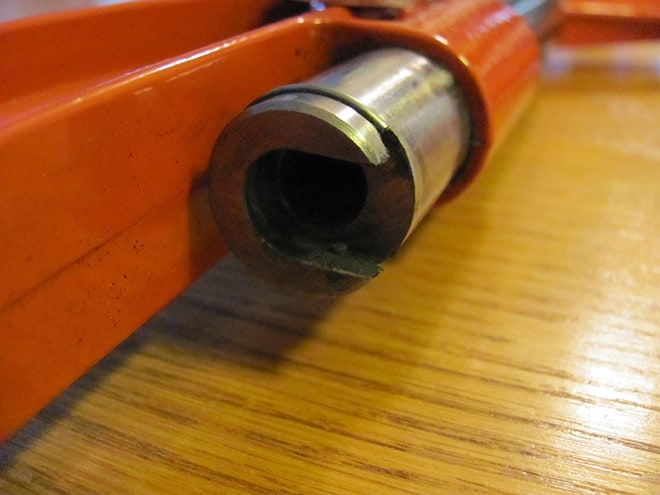 That aside, the ergonomics of the press are unrefined. The handle and body both have large ribs at the back with flat bodies. These don’t accommodate the human hand very well, and you will feel the narrow contact points against your palms with prolonged use. The surfaces are also narrow, reducing your ability to create force. But like everything about the Hand Press, these are a compromise—it keeps the weight and dimensions down.

So far, this may sound negative. I only lead with these issues because there is otherwise nothing to complain about with this product. I’ve used it to load hundreds of rounds, and partially processed tens of thousands more. It still looks and operates essentially the same as it did the day I purchased it. The ammunition shows no discernible difference from what I build on a traditional press. For longevity and durability this product is a winner.

This is a specialized device, but who benefits from using it? There are a few categories of people I’ll be discussing here:

The beginning reloader looking for their first press would be well-advised to avoid it. While it might look attractive because of its compact size, affordable price, and complete functionality, the reality is that unless you’re extremely compromised on space you’re better off using a fixed press. Those are easier to learn the craft on, as well as being better to expand on—it’s a lot easier to attach automated powder throwers and the like to them. If you’re looking for a first press, there are similarly-priced alternatives that you’re better off with. 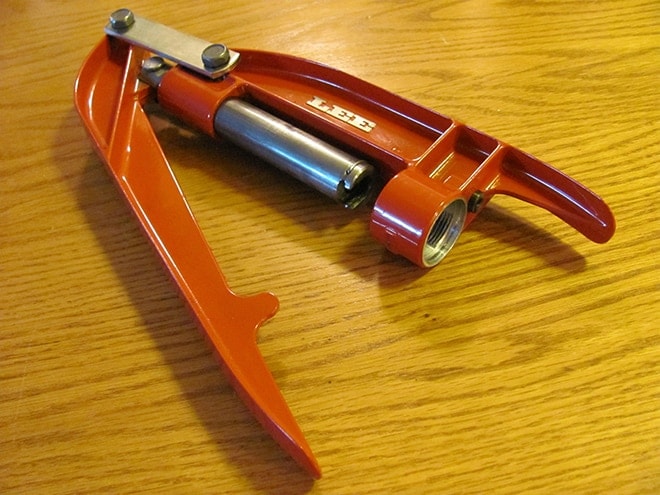 For somebody very short on space, this item provides a fair trade-off. It’s not an ideal press for using to produce large number of cartridges like a action pistol shooter will need, but if it’s all the space you have in your dwelling, it might be your only option. If you’re more of a recreational shooter who likes to plink occasionally, and it’s all you can store, this is a reasonable option.

If you produce high volumes of ammunition for action shooting the hand press actually has a surprising utility—it lets you get a significant amount of case prep done before you have to sit down at the bench. I use my Hand Press to resize pistol cases by the hundreds while watching TV, while I’m at work on breaks, or when I go up to a campsite and have time to sit around doing nothing. The Hand Press can save you a lot of time, and I actually highly recommend it for this.

If you’re a precision shooter (F-class, Benchrest, etc.) you may be interested in buying this press to manufacture test loads at the range. I can’t comment on this from personal experience, but I’ve heard anecdotes about this and seen it at one match myself. I asked the gentleman with the Hand Press why he did this and he told me he would try tailoring loads to the conditions of the event. I’m nowhere near an advanced enough rifle handloader or shooter to pretend to understand the intricacies of this process, so I’ll leave this point as an anecdote. 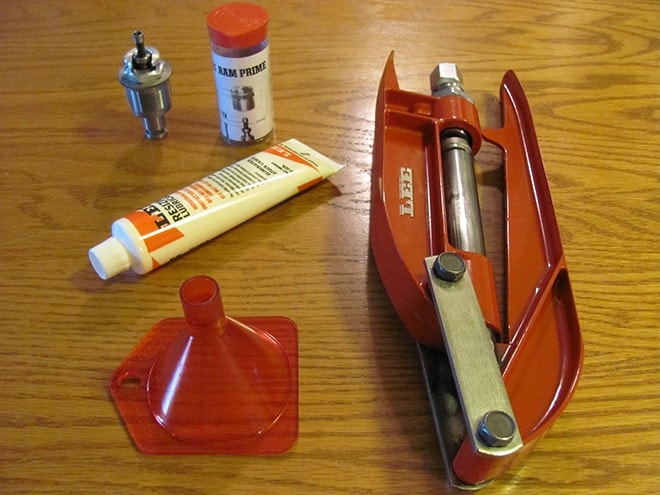 The Lee Breech Lock Hand Press can help those low on space get into reloading. (Photo: Andy C)

Finally, the Hand Press does have one last function—it lets you recreationally reload away from home. Obvious? Yes. But the first time I was sitting on some rocks in the woods handloading some .308 loads with dippers and the hand press, I have to admit, it was a pretty satisfying and zen experience. Distinctly unlike the sometimes-grinding process of cranking out about 1000 .38 Specials for IDPA practice. It’s novel, and the handloading process is usually anything but.

The Lee Breech Lock Hand Press is an odd contraption. It’s a well-designed and built device at a reasonable price. But for a lot of people, it’s basically useless. This is a strict downgrade in pure function from virtually any bench-mounted press, but very useful for corner-case applications. All considered, whether the Hand Press is a worthwhile investment is purely dependent on your handloading habits. For me, at an MSRP of $49, it’s been a great investment.