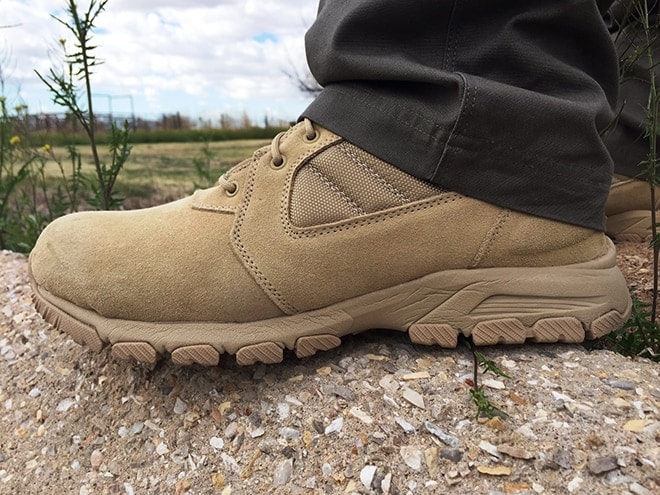 Magnum Response III boots made a day of desert hiking and range time comfortable and easy, just as we thought they would. (Photo: Team HB)

This review is a follow-on to our team’s first Magnum Boot review.  This time, the men’s Magnum Response boot takes center stage.

This eight-inch tall boot is available in black and desert tan—as is obvious from the pictures, we tested a desert tan pair. Like other Magnum models, there’s a wide range of sizes, from 5 to 15.

Our boot wearer in this case came back with high praise for these boots.  Here are the details: 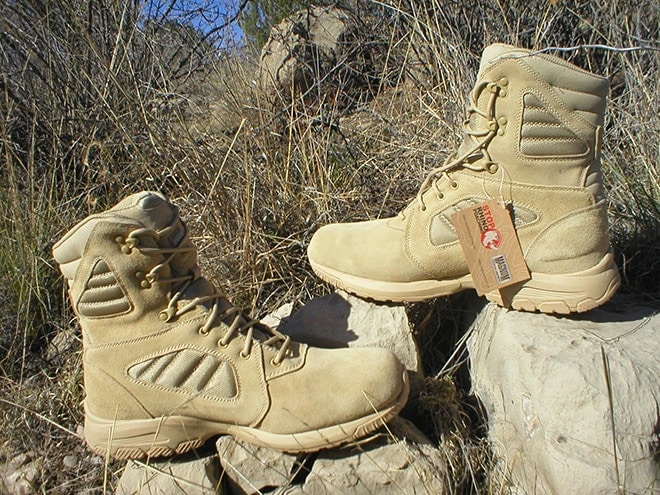 The upper is a combination of suede, rough-out leather where it’s needed, and padded nylon areas on the sides of the foot and ankle. The soles are slip-resistant and built for traction.

A major difference between the Response III and the Stealth Force boot in our first review is the lacing system.  Magnum calls it “Bleucher,” which surely has a meaning other than the Frau in Young Frankenstein.  It has a speed lacing system with thick and sturdy plastic loops above the ankle.  These make it very easy to do the quick-on or –off, allowing the wearer to leave the bottom of the boot at or close to their preferred level of tightness.  Models without these loops require much more time and effort fiddling with the laces to don or doff the boots. 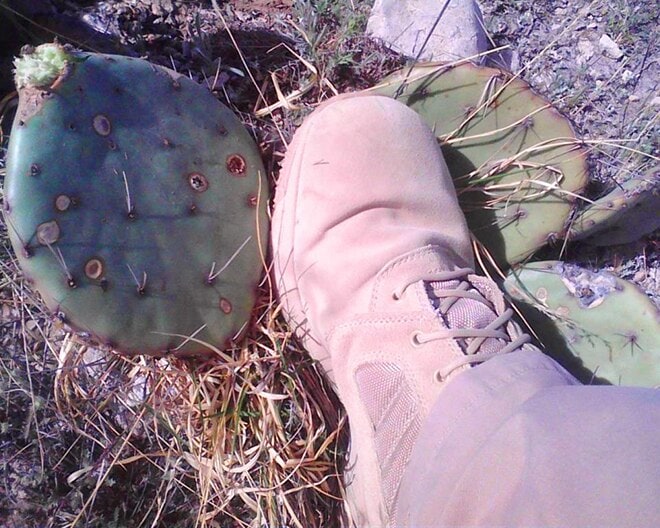 Our tester said, despite being new, these boots were instantly comfortable and a pleasure to use. He said the padded cuff around the top makes them easy to pull on.

The first trial of the boots was on a rocky, cactus-strewn desert trail, up and down a hill. “They’re cushy and very comfortable on rocky ground,” he said. They felt protective without being hot.  Though the boots feel soft, the soles seemed to crush thorns rather than be penetrated by them.

Ankle support was excellent, especially considering the rough and hilly terrain.  Our tester was very pleased at having zero pain or discomfort walking in these boots, even during break-in. 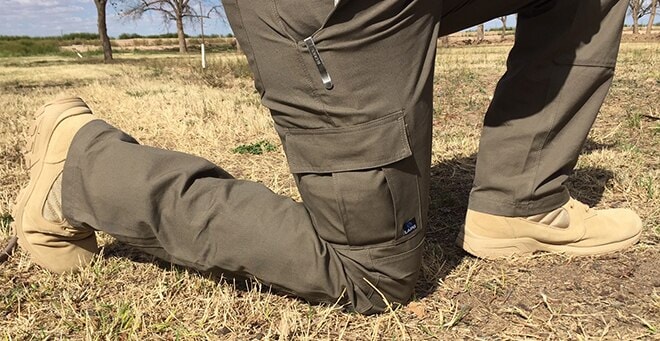 No boot can both protect and ventilate perfectly, but these come close.  At no time was a thorn felt, despite the breathable panels.  The tester reported the boots felt surprisingly cool for their level of protection. He was also impressed at their relatively light weight.

Traction was good and the boots held their own on both shifting and solid rocks, helping our tester feel confident about hiking in them. 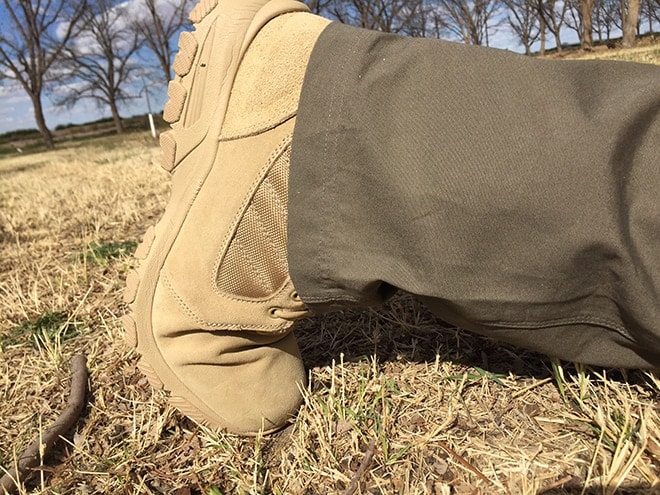 On a later date, the boots were worn in an all-day range class.  They remained comfortable, with the exception that the tester had to tighten one boot part way through the day, as they’d begun to slip and create what he terms a hot spot.  Proper lacing fixed the problem.

One point of possible confusion is Magnum’s generational labeling of the Response.  As of this writing, the $90 Response is in its third generation. It’s available with and without a side zip. Older editions are still available, but lack the more efficient lacing system. 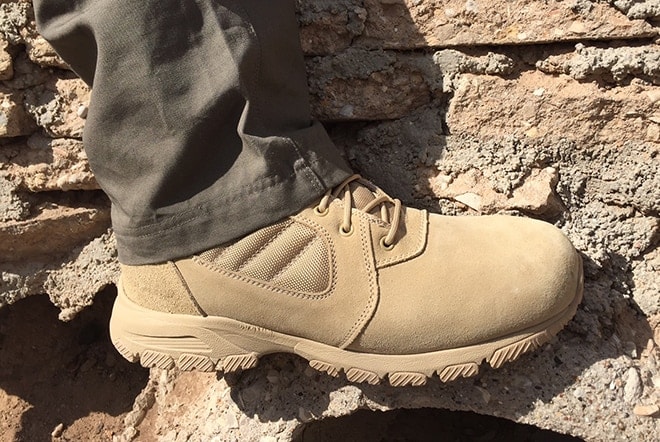 Now, I’d like to speak generally in reference to all three pairs of boots we tested, as well as time spent on the Magnum Boots website.  It’s all the rage in today’s footwear market to crank out new models or updated versions of ones that worked perfectly, while eliminating models that really aren’t old.  If I have any disappointment at all with Magnum Boots, it’s that they appear to follow that trend of fixing things that aren’t broken.  Low-cut cuffs and the lack of speed laces on boots more than triple the time required to put them on.  Considering many of the company’s boots are made for first responders who often work on-call, those changes are counterproductive.

Magnum Boots is a multinational company, so when ordering direct, it’s useful to know you’re on the right country’s website.  Here’s a link to the US website. 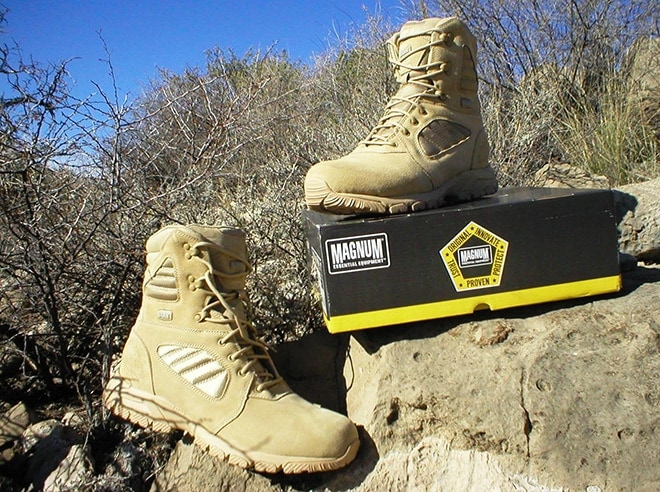 Magnum Response III boots are a deal for around $90. (Photo: Team HB)

As testers, we spent time studying a plethora of lacing techniques that can customize the fit of a shoe or boot according to foot type and nature of use.  A wealth of videos and websites cover these methods, so I’ll not name any single one.  It’s a topic worth studying and experimenting with if you’ve struggled with footwear or are planning an on-foot excursion that’s outside your normal range of daily activities.

Magnum Boots’ Response III is a great value at $90.  It retains some of the very practical features which Magnum has dropped in newer models, specifically the high rear cuff and speed laces,  that make them user-friendly.  They’re comfortable, tough, and lightweight. Our team highly recommends not only the Magnum Response III, but also the company in general for their attention to customer service.