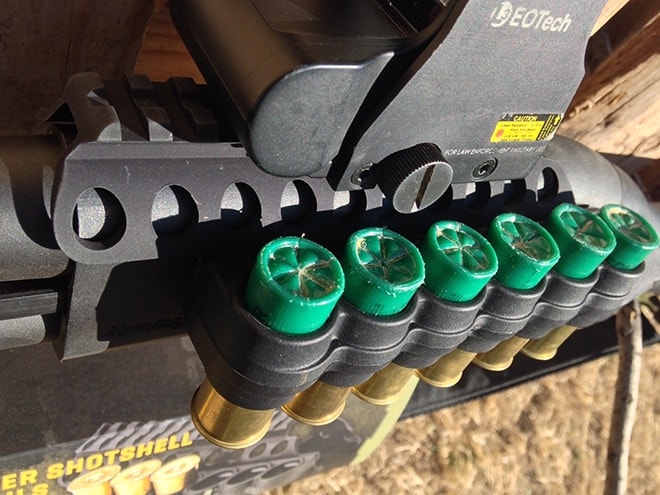 California-based Mesa Tactical has a range of accessories for most common models of shotguns used by agencies, and for home defenders who wish to step up their readiness with greater ammo capacity and other options. In this review, we tested their magazine/barrel clamp with an accessory rail, and their popular new Sureshell polymer shotshell carrier, packaged with rails. 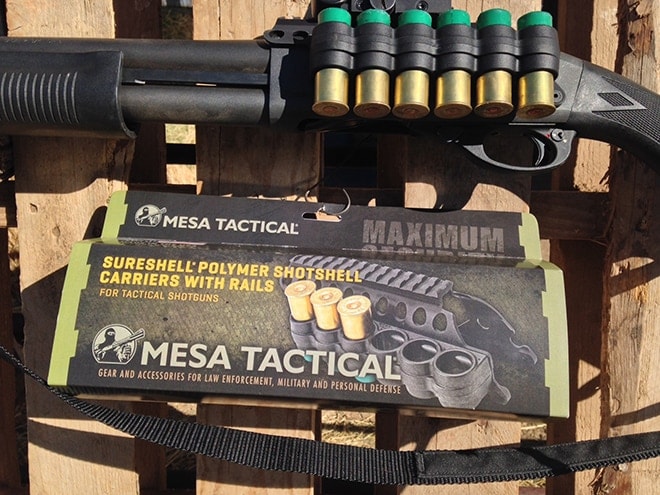 Our test team owns two Remington 870s, and these were the focus of attention for these accessories.  One has a rear sight that (we learned) seems to be welded on… it wasn’t going anywhere.  It also presently has a shorter mag tube, so it couldn’t accommodate the magazine/barrel clamp.  A word of advice here is to check the detailed mounting instructions on the Mesa Tactical website; their print catalog has product details and pictures, but no installation instructions. 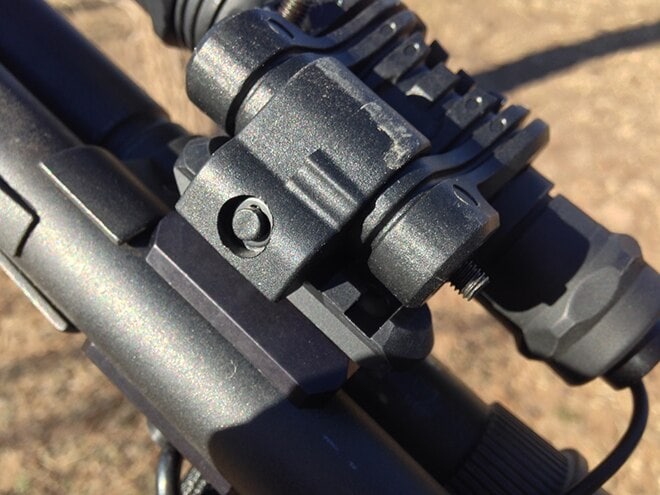 The clamps and accessory rail offer a mounting point for sling swivels and a place to mount a light and/or laser.  The Allen wrenches and screws needed for mounting are conveniently included.  The sling attachment is a push-button, quick release style, making it handy for quick sling changes.  The four-slot length of Picatinny rail offers the perfect mounting platform for a light. A nice advantage to this accessory is the support it provides to a magazine extension by linking it to the rigid barrel.

The clamp/rail system made the 870 tougher with its support for the six-round magazine, and provides a solid but lightweight platform for the Ledwave C-2 Camo light I chose for it.  The magazine/barrel clamps with rail and sling swivel retail for $90. 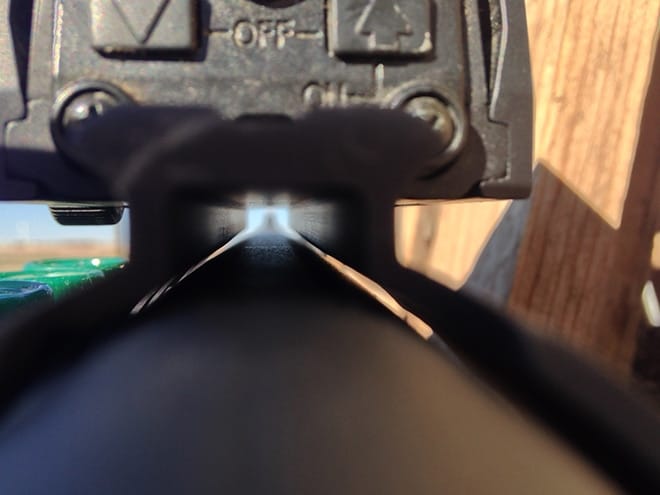 Moving on down, the Sureshell polymer shotshell carrier with integrated rail came ready to attach, with tools and hardware included.  The sidesaddle carrier is quite impressive in terms of weight—it’s lighter than aluminum, yet obviously tough. I admit to having a moment of gazing at my 870, enjoying the cool factor the carrier lends to it.  The sizable Picatinny rail gives lots of options for installation of optics and, whether by accident or design, there’s a perfect narrow channel between the rail and barrel through which one can see the iron front sight.  It’s a feature I really like, for that moment when whatever’s mounted on the rail fails for any reason. 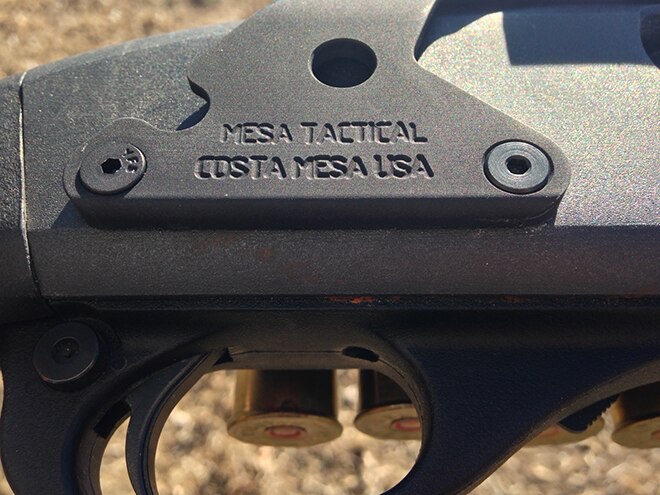 That moment of admiring this beefy new, 98-dollar addition was cut short when I attempted a dry fire-and-reload, only to discover the forend wouldn’t cycle completely.  The front of the carrier is long enough to block some forends from completing the rearward stroke.   Mesa Tactical’s website does warn about this, though we failed to foresee the issue when ordering.

The company advises cutting down the rear of the forend.  We opted for a bit of trading of parts, and were soon back in business with a shorter, 7.25-inch forend.  Another solution, offered by Mesa Tactical’s extremely helpful Marketing and PR rep Zuly Rivera, would’ve been to scale down in size but up in price to their $135 four-shell model constructed of aluminum. 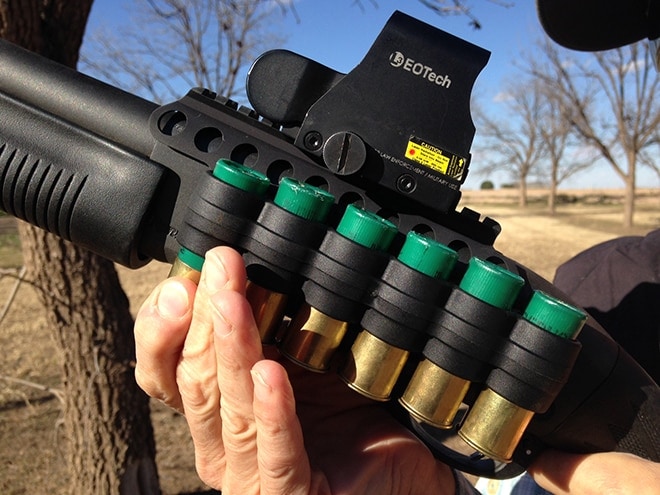 The shell sockets themselves feel quite tight when inserting shells.  But functionally, they worked great.  The rail places the shell in close proximity to the chamber for quick reloading.  Shells may be inserted primer-up or primer-down. The carrier didn’t interfere with my southpaw trigger hand in any way, and I was able to run the gun with the carrier fully loaded.  Likewise, our right-handed tester really liked the way the device puts shells right where they’re needed and the optic at the perfectly custom eye relief. 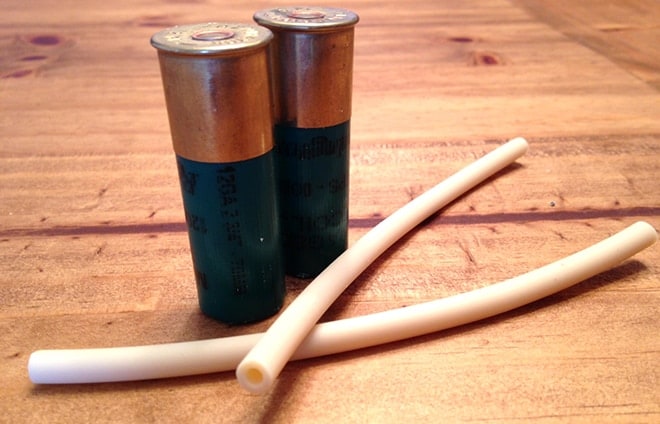 The snug shell sockets are silent to operate, thanks to an elastomer insert that holds them in place with a firm but dynamic grip, like having a rubber tire around each shell.  The company provides a set of stiffer inserts for operators wanting even tighter shell retention.  The elastomer, disappointingly, comes with a warning not to leave shells in the holder long-term, lest they shrink and lose their firm hold.  The product, as the manual explains, is designed for weapons that are checked in/out of an armory for every shift and downloaded when not in service.  The elastomer rings supposedly regain their plumpness after an eight-hour break.  As a civilian, and for many police officers, giving our shotguns daily downtime isn’t practical. 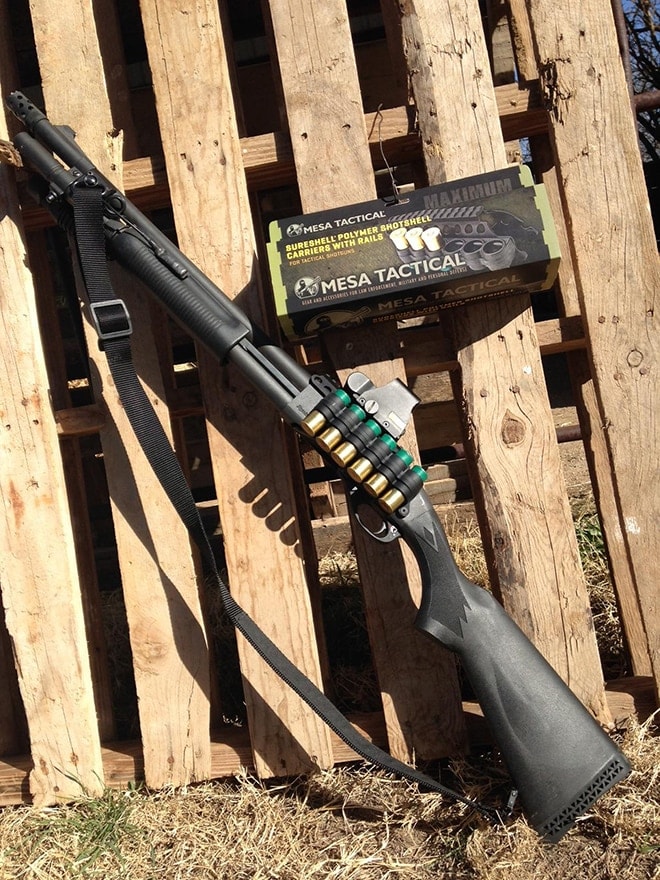 Mesa Tactical accessories are high quality products, just make sure they are compatible with your gun first. (Photo: Eve Flanigan)

Departments considering Mesa Tactical accessories for any shotgun should thoroughly investigate whether existing furniture will accept these accessories. Although they lend practical handiness to a gun, having to change out multiples of, say, foreends, or finding out that shorter mag tubes may not accommodate the clamps, could increase the overall cost in both parts and labor.  I’ll be interested to see how the shells currently stored in my six-round Mesa Tactical carrier stay snugly in place.  It’s been three days in dry desert air so far, and the shells are still held tight.

Mesa Tactical’s high-quality , USA-made accessories are sure to appeal not only to their targeted law enforcement and civilian customers, but I suspect they have a place in three-gun as well, being lightweight and adding to function as they do.  Though pricey, these accessories make it possible to build or improve a tactical shotgun for less than the cost of a new one.  Best of all, their knowledgeable customer service reps are responsive. Check them out.