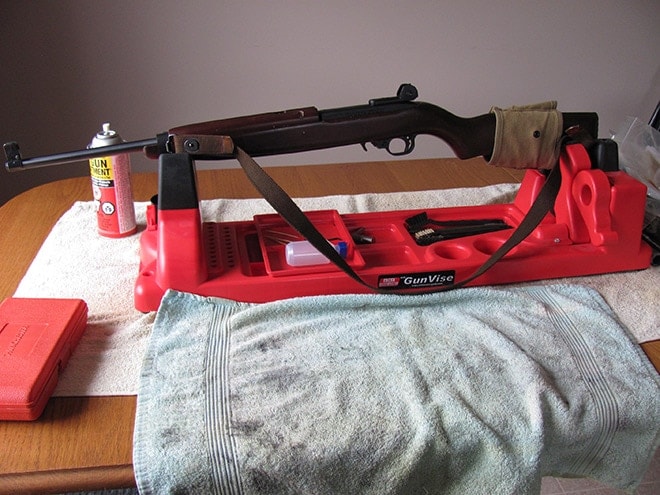 Even a short gun like this 10/22 in a youth-sized M1 Carbine stock fits in the vise. (Photo: Andy C)

It’s hard to sell me on ‘accessories’ for guns. I don’t like spending money. So the idea of spending much—if anything—on a cleaning accessory was a tough sell for me at first, much less something like the MTM Gun Vise. After all, it’s a hunk of plastic that holds a gun. I have two hands, some towels, and a perfectly good series of tabletops in my home I don’t mind ruining with cleaning agents.

But then I actually used one, and I realized how much easier and neater it made cleaning certain guns—specifically, my AR-pattern rifles. This proved to be true with practically all my long guns. Now, I feel like a bit of a chump for not picking one up earlier. The MTM Gun Vise isn’t an essential product, and it won’t make you shoot better. But it will probably save you frustration, and it’ll definitely save you time cleaning. 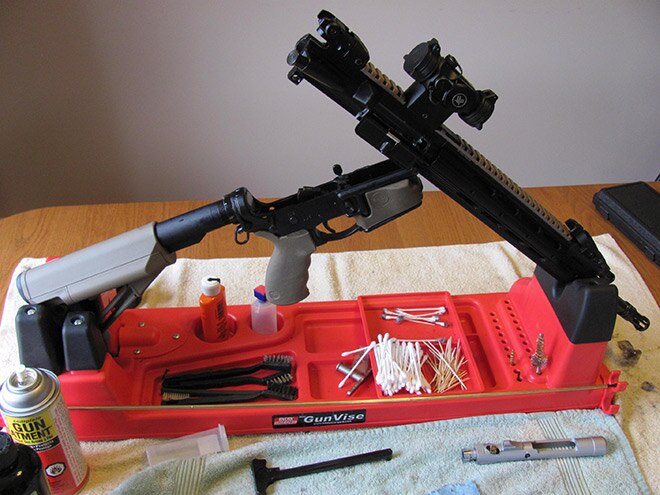 The Gun Vise has made cleaning my AR much easier and more organized. (Photo: Andy C)

The MTM Gun Vise is a plastic workbench designed to hold a firearm so that you can use both hands for cleaning functions like pushing rods. It’s a plastic contraption 31 inches long and 8 inches deep, with a stand on either end 8 inches high. One of these stands has a locking vise mechanism in it that allows you to adjust to grip part of your gun. All of the contact points where your firearm rests have a thin rubber coating them, further improving the grip and keeping your stuff undamaged. The Gun Vise sits on some little feet that are also rubberized, and has a series of holes for holding jags on one end. The center compartment has a sliding tray that covers more trays for holding patches and other miscellany. The whole affair comes in a box pre-assembled, and one can be yours for $45. 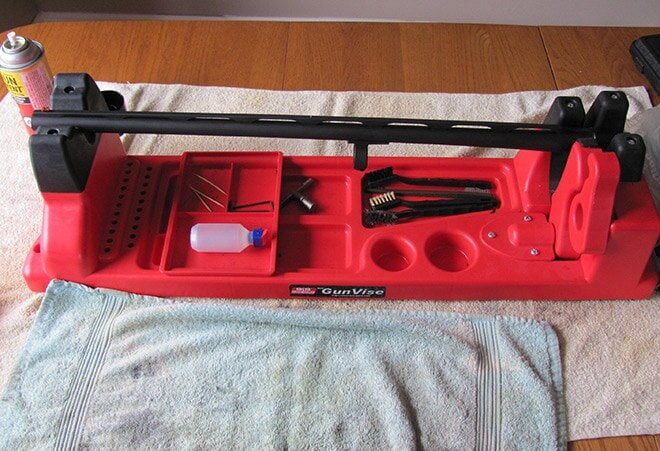 For longer guns like field shotguns, you can put the barrel in the vise by itself for cleaning. (Photo: Andy C)

It’s not glamorous — if anything, it actually looks kind of cheap. Red plastic, black rubber, and not much else, and it’s hollow on the underside. It also weighs next to nothing. But don’t let any of this fool you, the Gun Vise is a well-designed tool and that smart design transfers into keeping it as cheap as possible without sacrificing functionality. Let’s take a look at the essentials.

First, the construction material: the red, shiny plastic has burrs here and there from the molding process. It’s not going to be a prized possession to show to your friends. But it is practical. Your various cleaning chemicals won’t be absorbed into it; it doesn’t discolour; and the distinctive red colour means any tool, patch, screw or bottle you put down on it stands out, so you don’t lose track of it. It’s also easy to clean. 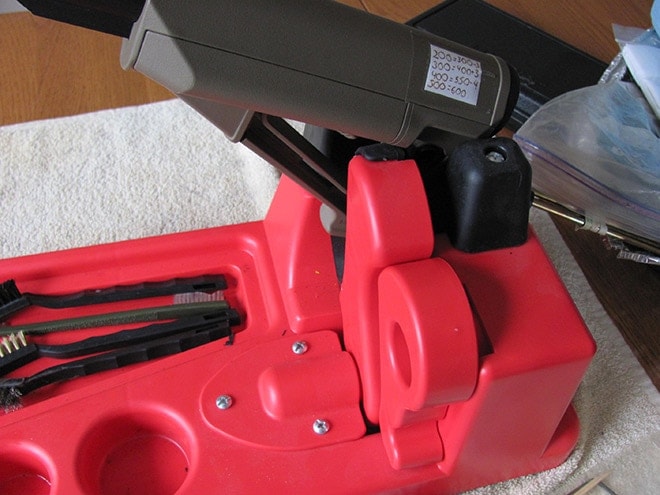 The vise grips the buttstock snugly to keep everything stable. (Photo: Andy C)

The rubberized points protect your gun as you’d want, and the little feet provide it with plenty of traction. Even on a yellow sheet of plastic I put under it, the Gun Vise doesn’t slip around without considerable force being applied, especially once the weight of a gun is in its grip. I’ve been using mine for years and the rubber isn’t cracking.

The whole device is only composed of a few pieces and the vise grip side’s operation is so simple it adds some durability. It’s made of essentially four pieces: the body; the vice’s control and grip; and the single, totally optional, sliding tray. It’s simple and it works, and having fallen off my shelf where it’s stored a few times, has continued to work without protest.

So it’s not pretty, but it appears functional. But how much use do I actually get out of it? 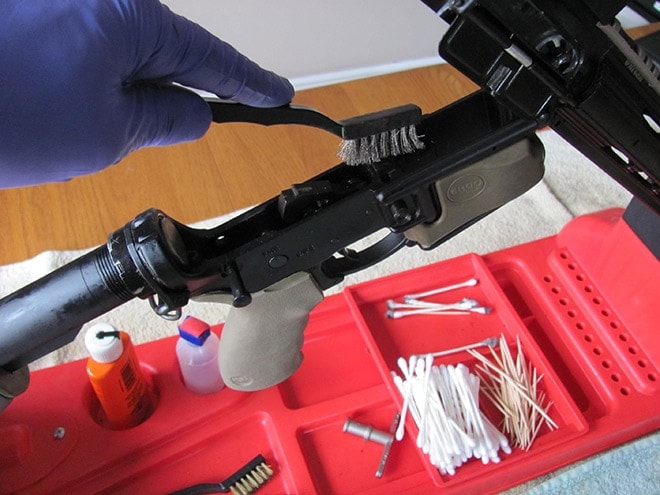 It’s like having extra hands, so you can even clean and take photos! (Photo: Andy C)

Some guns are unwieldy in the best cases because of their length and weight. But I find cleaning field shotguns particularly irritating because I have to lay them sideways on the table, take the barrel off, hold the back of the barrel and try to push a cleaning rod as long as the barrel itself through, all the while taking care not to pop the patch out the other side and spray cleaning solvent all over the room.

While that might be slightly dramatized, the fact is that cleaning a gun is way easier with two free hands. The Gun Vise is effectively an additional set of hands. You plop your gun in, lock it into place, and get to cleaning. No fiddling around holding the barrel or receiver. Everything’s in one place in front of you. It’s not rocket science, but it works wonderfully. 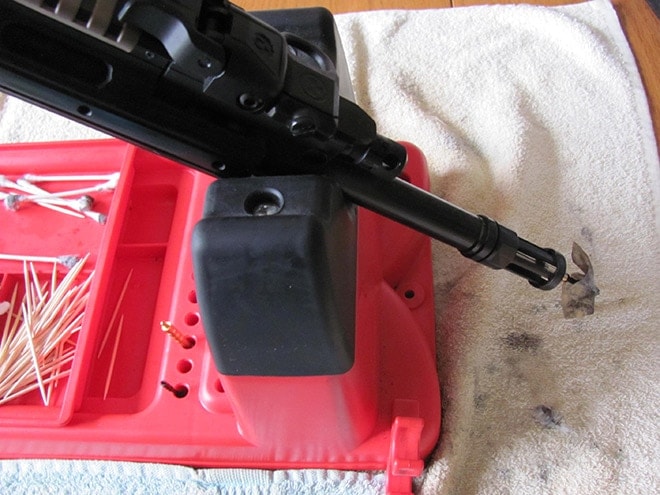 The patches fall out the barrel or easy collection. Rubberized coverings protect your firearm from scratching and hold it steady. (Photo: Andy C)

For cleaning rifles like AR-pattern guns, you can detach the upper completely or leave the bottom punch pin in and leave the rifle “open” in the vise to clean both components easily. Some guns, like my Benelli Nova, I simply put the barrel in the vise for cleaning, then pop the body in for its own cleaning. Other items like the Ruger 10/22, because of their short overall length, can be put into the vise whole. But in a final analysis, I don’t own any long guns that don’t fit in here for cleaning one way or another. The shortest a gun would have to be is 23” to fall between the posts. 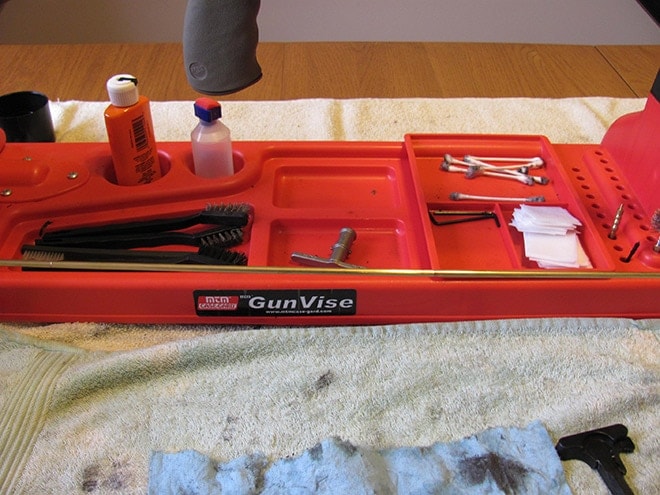 Other than the most basic function, the Gun Vise has nifty little trays that I like to use to hold punch pins and screws securely so I don’t have an anxiety attack when I hear something hit the floor unexpectedly. I also use the sliding tray on the top to store my patches. I keep my cleaning kit separate from the Gun Vise so I don’t store jags in the holders, but I do keep the ones I’m currently using in there.

Truthfully, the device is so simple and works so well for its intended purpose I can’t provide any meaningful criticisms. I would love to see a version where the distance between the holding posts is adjustable to accommodate shorter guns and parts, but that would definitely make this more expensive and I don’t know if I’d be willing to pay for it. 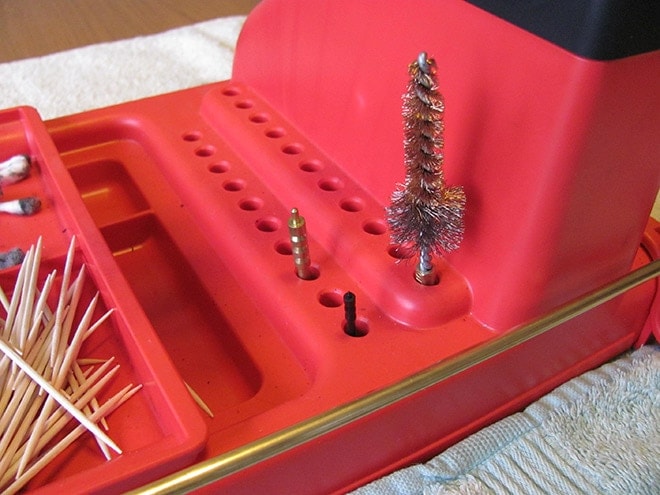 I guess I’d take a moment here to say I’ve seen people using this as a rest for sighting in rifles as well, although I’d argue you’re better off with a simple heavy bag setup for that.

The MTM Gun Vise is a simple device that’s good at what it’s designed to do. Given how much time most gun enthusiasts spend on cleaning guns, it makes sense to invest a little in tools to help—as well as to encourage time to be spent cleaning that might be skipped otherwise. Are there other sturdier and feature-laden competitors on the market? Yes, but they don’t have this price point, and I can’t imagine them doing a whole lot more.

At the end of the day, you can argue the Gun Vise is unnecessary and you can get by without it —  and you’d be right. But for the price, why not just make your life easier?