A couple of weeks ago, I ran a review of the software side of MyCaseBuilder.com.  MyCaseBuilder.com (MCB) offers a unique service.  You can buy a case and design completely custom foam.  You can use the ready-made shapes in the MCB Shape Library.  Or you can buy foam for a case you already own.

The software, which is an easy to use 3D rendering software, offers infinite options.  It was easy enough to use, and the cuts in the foam came out perfectly.  The hardest part wasn’t the learning curve needed to use the software interface, but the decision making process.  What do you want where?  Why? 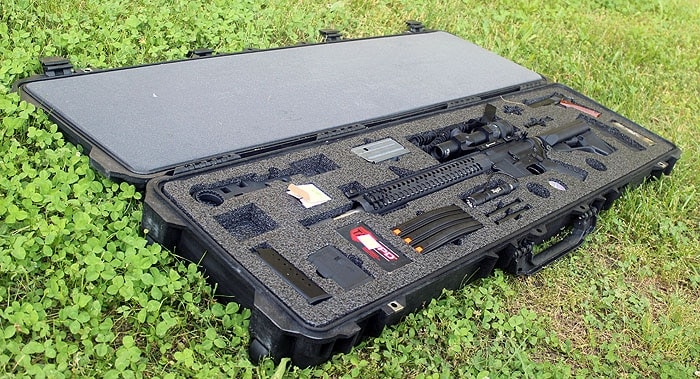 The case design started in a Pelican 1720.  I was looking for something that I could actually drop into the back of my Subaru without much effort.  The Pelican 1750 is eight inches longer than the 1720, and it will fit in the back of a station wagon, but it takes some creative maneuvering.  And it doesn’t happen very quickly. 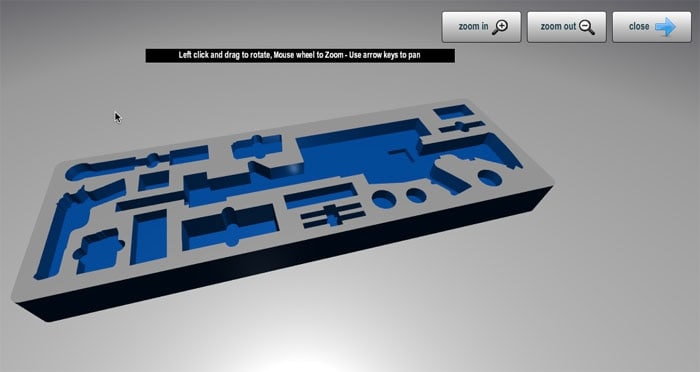 But the more I looked at the design, the more I wanted that extra space.  In the end, I opted to go with the 1750, just to try to pack as much into one case as I possibly could.  So I took transferred the 1720 template I was creating to the 1750 template.  It was that easy.  Then I moved some things around.

So the modified design looks a little better.  The 1911 cut out, for example, is at my right hand.  I like to have a pistol in my rifle case, just in case.  If, while my attention was focused on the long gun, I were to need a handgun, I wouldn’t want to reach across the case, and then search for a magazine.  I wanted it there, and accessible. 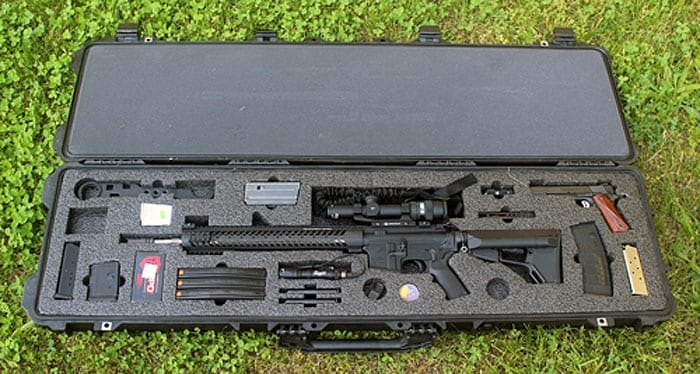 In all, I have room for four 1911 magazines (five if I’m traveling with one in the gun).  The cut outs for the 1911 were in the library already.  I simply added more space to accommodate the sights, and made some custom cuts for the magazines.

The Stag 3G is a competition gun, and competition guns tend to travel, a lot.  I began with a M4 cut out from the MCB shape library and monkeyed with the measurements and it fits quite well.

I did have to trim just a bit of foam from the area around the stock.  But that was becasue I didn’t get my measurements exact.  The Magpul stock isn’t a typical AR stock.  But a sharp knife fixed the issue quickly.

I experimented with the layout of various AR magazines.  The three stacked side by side are the Ruger C-Product Magazines.  That’s 90 rounds.  I have flat cut outs for a 30 round P-Mag, a 20 round mag, and a 10 round, too.  That way, I can keep some bulk 5.56 in the larger magazines, something different in the 20 round mag, and the good stuff in the 10 round mag, if only for organization. 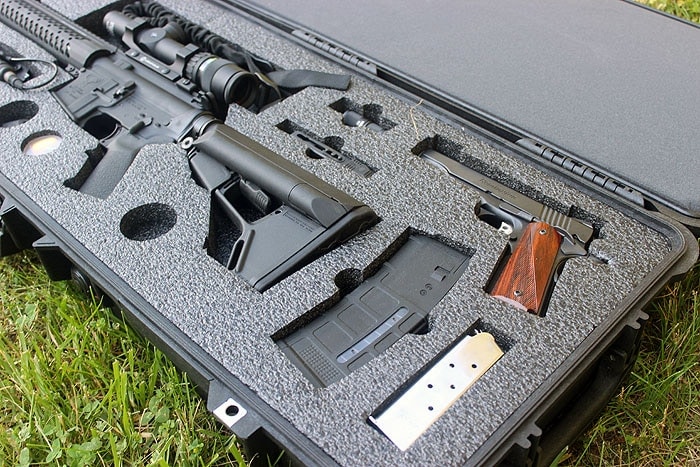 The rest of the space is for miscellaneous tools and add-ons.  Earplugs.  A strap connector.  A flashlight.  An AR wrench and a Gerber AR Multi Tool.  I cut in extra room above the scope, which is a Trijicon Accupoint (for now).

The foam is perfect.  I’m not perfect, so there are a couple of places that will need some adjustments.  The Dueck Defense Rapid Transition Sights kick off the Stag at a sharp angle, and are a bit deeper than I’d allowed for.  But everything else is spot on.

The foam for the 1750 on MyCaseBuilder.com is $184.  That price reflects any number of custom cuts.  And for $7.99 you can buy Fail Safe insurance.  This covers MCB’s mistakes, obviously, but yours too.  Even if you screw something up, you can send the foam back.  MCB will re-cut it, and ship it back.

As for me, I could not be happier with the foam.  Fully loaded (without any ammo, though), the case comes in really close to 50 pounds.  That will make flying just a bit easier.  Loaded up, it gets heavy.  But that weight is evenly distributed and holds just about everything I could possibly need.  And that’s what a case is for.