ProMag has a new drum magazine on the way for fans of the Saiga 12.  Like ProMag’s other drums, this one is polymer, mostly.  The body is black and the back cover is a smoky clear that lets a shooter see how many rounds are left.  It is about as big around as the mouth of an old coffee can and holds 15 2-3/4-inch 12-gauge shells.

The magazine is remarkably solid.  The spring tension is beastly, which makes loading a two handed (and sometimes arduous) job.  I developed a technique that worked by pushing the top round down into the body of the magazine with my left thumb while I slid the next round in far enough for it to catch.  Then I pulled my left thumb out and seated the round I had just put in.  Rinse and repeat. 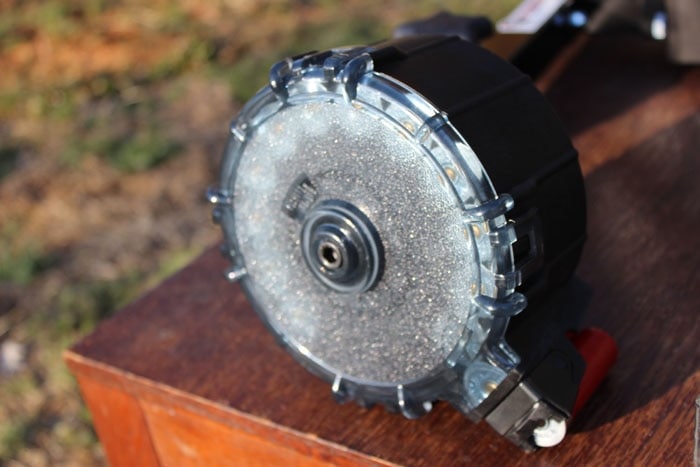 Shooting with the ProMag

It isn’t easy to load, but it’s worth it.  Shooting with the ProMag is really an experience.  We ran the drum on a Saiga SGL 12-09 that the FIME Group sent us through K-Var.  The Saiga 12-09 comes with a five round Russian box magazine.  The box magazine works in the same way that an AK magazine works.  It rocks in from the front and catches in the back.  It works great, but only holds five shells. 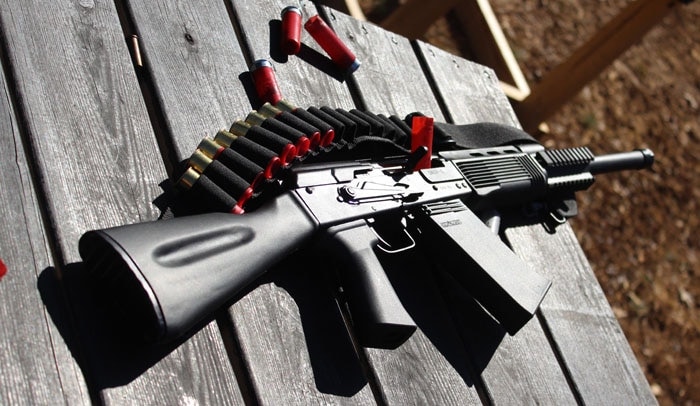 If the box magazine has an advantage over the ProMag drum, it is its ability to hold 3-inch shells, but, again, it’s only a five round box.  If you’re used to shooting AKs with larger capacity magazines, five rounds disappear quickly.  Yet the five round magazine is much easier to change out, so magazine changes are fast and efficient. 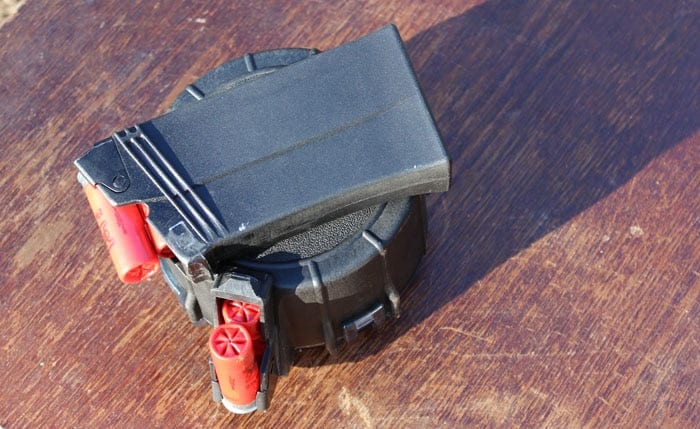 But the box magazine may have more serious liabilities.  The Internet is awash with rumors about box magazines deforming shells.  Rumor has it that the spring tension required to drive the weight of 12 gauge shells up a magazine will push on the plastic shells and, if left long enough, deform them.  The pressure is supposed to make the plastic of the shell a bit more oval. 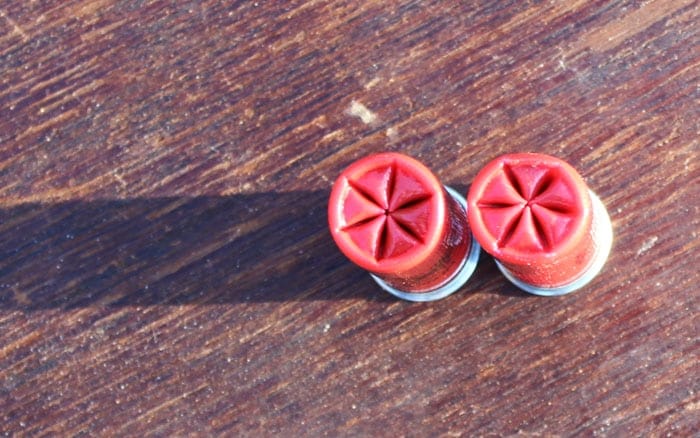 An oval shell may not feed in a round chamber.  I tested the theory by loading the five round box magazine and leaving it for several days.  Nothing noticeable.  I couldn’t get any deformation at all, until I left it next to a heating vent and warmed everything up.

And then the deformation was only visible in one shell.  Right after I took the picture above, I loaded that wonky shell into the Saiga 12 no problem.  The bolt slammed down and forced it home.  So I’m not going to judge the box magazine too harshly. 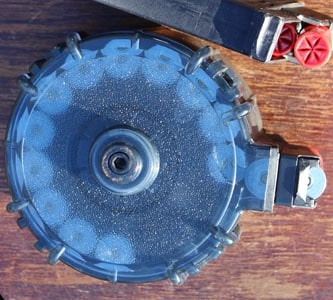 Getting that fifteenth shell in isn’t easy.

But the drum doesn’t have this issue at all.  Each shell is supported in the teeth of a large polymer wheel inside the drum.  And they’re free enough that they rattle.  The pressure is only on the toothed wheel itself, and the first and second round feeding out.  Even then, the pressure is on the brass of the shell rather than the plastic.

The ProMag drum is a a beautiful thing, but it took a while to get the kinks ironed out.  ProMag acknowledges that the drum might not fit perfectly, but they provide clear instructions about where to remove material.  I filed on the drum for 10 minutes or so before it fit in the SGL 12-09.  And once it fit, it fit like a dream.

The Saiga 12 was set up for high velocity loads.  We’d brought a couple hundred rounds of low brass Winchester target loads with us to the range, and the 12-09 wouldn’t cycle it.  The same held true for low-recoil Fiochi buckshot.  There just wasn’t enough gas getting through to move the bolt back far enough for the spent shell to clear the chamber.  With shells with velocity above 1,300 fps, the 12-09 ran well.

It was frustrating, but easy enough to solve.   We took the Saiga back to the shop and opened up the gas ports a bit.  Now it will cycle anything.

With the gun running smoothly, we focused on the ProMag.  The spring tension seemed too tight.  Loading was too difficult.  We ran maybe five magazines through and had feeding issues with each one.  What had been a disappointing day at the range ended with a full dissection of the magazine. 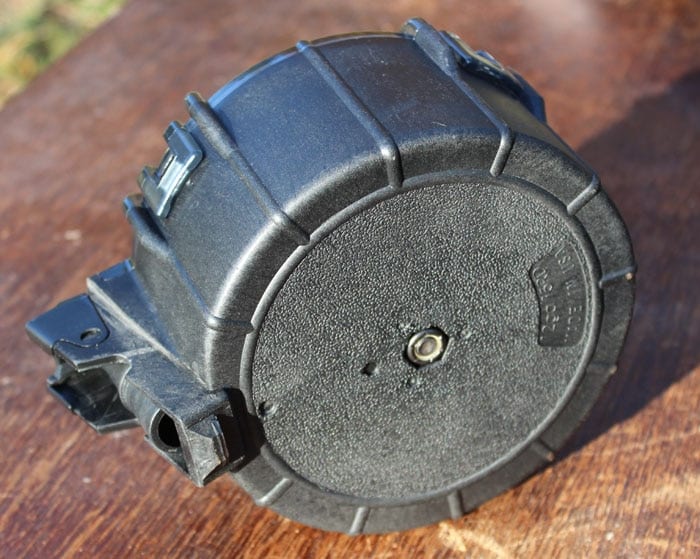 The 15 round ProMag drum from the front.

The parts are all intuitive and easy to manipulate.  I released the tension on the coiled spring and wound it back up.  In all I took it apart and put it back together three times before I had the tension right.

Ever since, it runs fine.  Not just fine, but reliably.

Now I want one that will hold 3-inch shells.

I like ProMag’s drum.  It requires that you think.  And the challenges presented by fit and function will let you get to know your gun in a way most never bother to do.

But if you are one who likes to take a product out of the box and have it run flawlessly and fit perfectly, than the ProMag isn’t for you.  That said, the AK platform may not be a perfect fit, either.

After the current fervor dies down, they should sell for somewhere close to $70.  Before every drum magazine sold out, the 20 round ProMag was selling for close to $80.  The 12 round drum sold for around $65.

$70 isn’t chump change, especially for a magazine you have to modify a bit to get running.  But once you find the right balance, the ProMag drum is worth it.  Fill it up and empty is a few times, fast, and you’ll see what I mean.