Gear Review: Outfitting an AK for Aimpoint Micro use 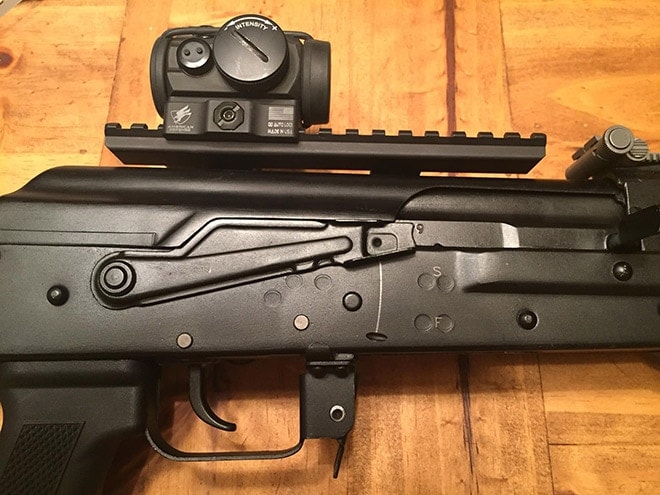 The UTG and ADM mounts turned out to be a tidy combo for my Molot VEPR FM-AK47 and Aimpoint Micro T-1 red dot optic.(Photo: Eve Flanigan)

It was inevitable: the test of the Molot VEPR FM-AK47 made me want to put an optic on the rifle, to make those 100-yard shots a little easier on near-sighted eyes.

What I had in hand was a perfectly good Aimpoint Micro. What I didn’t have was a way to mount it on the AK, or a ton of money. After careful consideration, I chose a couple accessories to secure the optic, and found both to be quite satisfactory. 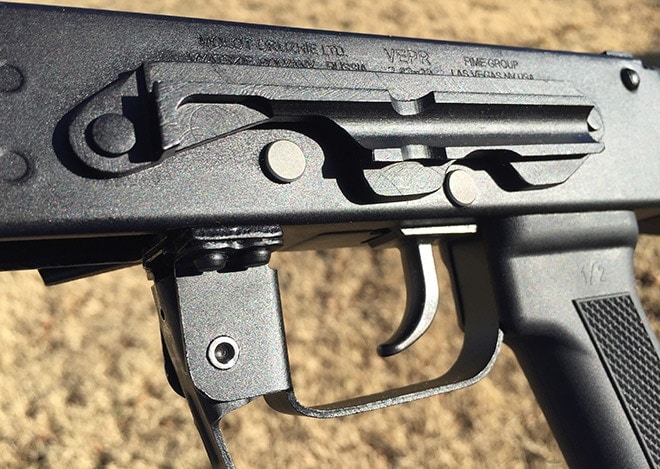 First came the necessity to have a rail on which to mount an optic. The FM-AK47 has a mount on the left side of the receiver. For it, I chose the Leapers UTG Pro quick-detach AK side mount. My local dealer ordered it and sold it to me for a bit more than ten bucks less than the $57.97 MSRP. 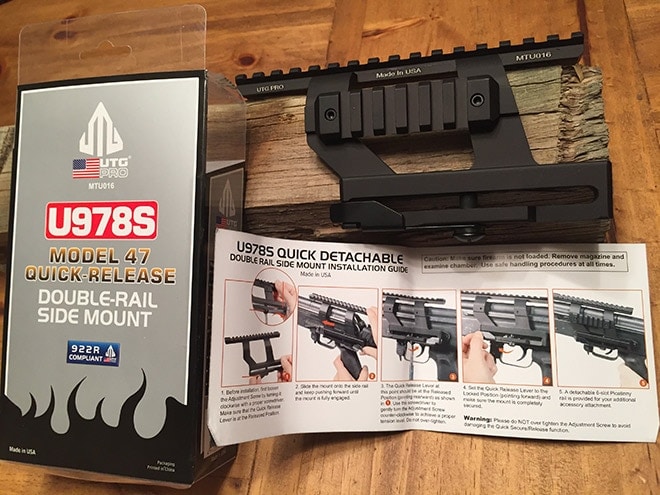 Plans for co-witnessing with the iron sights were foiled by the slight offset. No biggie, since the mount comes off in seconds. (Photo: Eve Flanigan)

Having had a dismal experience with the UTG front sight tool, I was hoping for the best but expecting the worst from this mount. Fortunately, it did not disappoint. The rails of the mount are slightly adjustable to accommodate different AK mounts. Once a proper fit is determined, a turn of a slotted screw squeezes the mount on securely. On top of that, the quick-release lever folds flush against the mount. It’s a nice tight fit that never threatened to come loose or catch on a sling, clothing, or gear during hours of testing and carry. 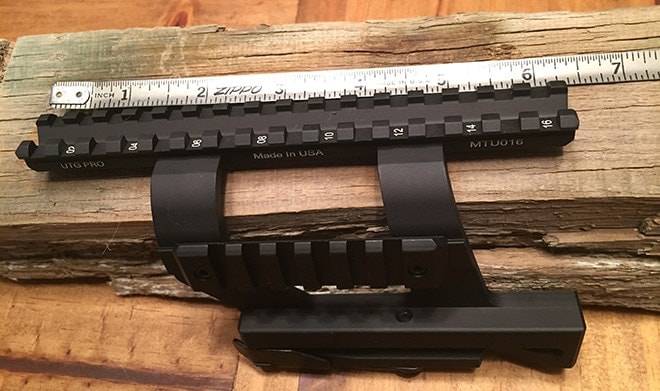 The mount adds 6.5 inches of numbered Picatinny rail-estate to the top of an AK. Included is a side-mounted rail with installation hardware, in case you want to add a light or yet another optical device. It’s not the greatest place for a light, with the receiver blocking half its beam, but it’s an option.

The mount is solid steel and boasts Made in USA branding. It adds nearly a pound to the rifle, and once in place, works as a seamless unit with the gun until it’s removed. 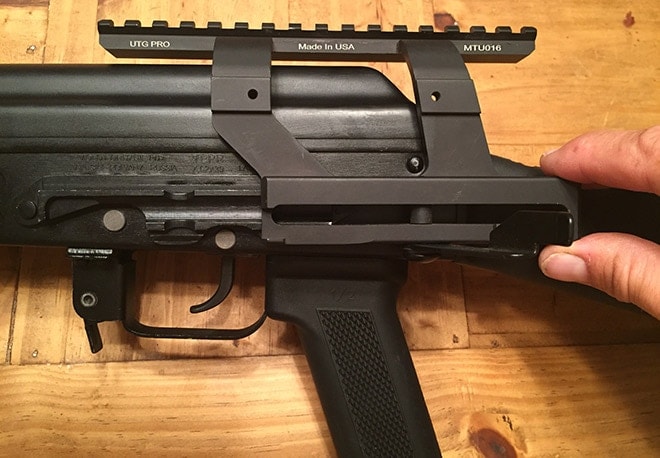 Middle-of-the-road pricing and the apparent ability to use the iron sights through the UTG mount’s generous channel were this device’s greatest appeal, at least while I was window shopping. Once installed, using the irons as backup sights proved to be a pipe dream. The mount sets ever so slightly—but noticeably—off the axis of the aligned irons. The clearance is so low as to make it a chore to visually locate and keep the tip of the front sight in view while peering underneath the red dot. My plan for keeping both systems up at the same time was foiled. No matter, the clamp-on device slides off the rifle in seconds, leaving the irons free and clear. 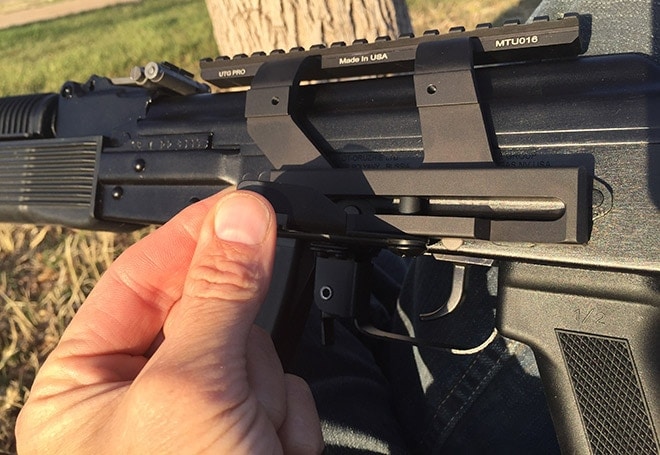 Securing the UTG mount onto the AK. The lever held without incident. (Photo: Eve Flanigan)

With a satisfactory rail atop the AK, I was eager to install my Aimpoint Micro T-1 red dot optic and get to shooting. That excitement would have to wait, I soon learned, until I could install a low-riding rail mount on the Aimpoint. The original LaRue Tactical high mount, so handy on my AR, is much too high to make a simultaneous cheek and shoulder weld even remotely possible. 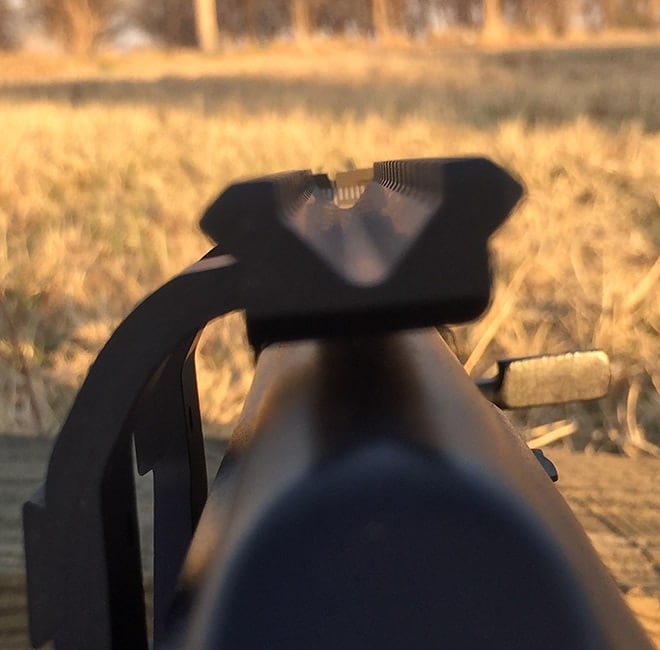 The UTG sight mount has many names, but performs its one purpose quite well. The instructional pamphlet is a testament to good customer service. (Photo: Eve Flanigan)

The folks at Tactical Intent, based in Kentucky, kindly provided a sample of their moderately priced low mount by American Defense Manufacturing (ADM). Along with the mount came screws to install the mount on the Aimpoint, an Allen wrench for doing so, and color printed instructions. Within minutes of opening the box, the Aimpoint was secured in the American Defense plate, and I was picking out eye relief distances. The mount secures with a locking lever that can face forward or back. It has a subtle US flag on the side stamp, a nice, albeit small, touch of patriotism on my mostly Russian-sourced rifle. 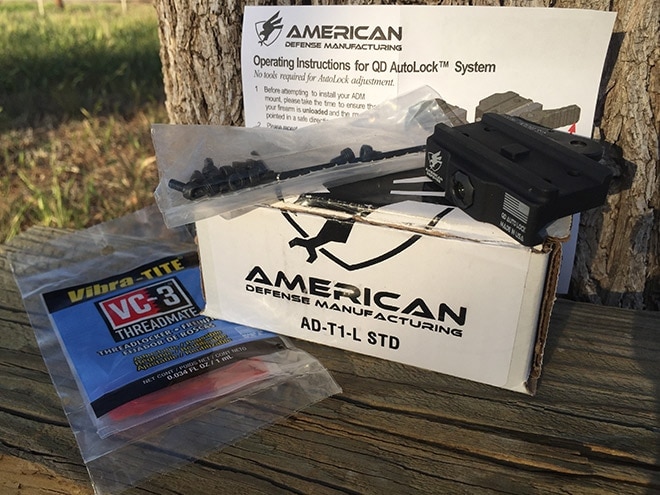 Like the UTG mount, the ADM Aimpoint attachment has no tendency to come loose at inopportune or unplanned moments. The lever locks into place and will only come loose with substantial pressing on the release button while pressure is also being applied to the lever. Both companies did a lot right when it comes to making sure no parts will come loose or get lost.

The American Defense Manufacturing mount costs $65.41 through Tactical Intent. Not dirt cheap, but also not expensive when one considers that it’s constructed from CNC-machined aluminum. Lightweight, but thick and strong, It’s earned a spot in my collection next to its taller LaRue predecessor. I find it to be just as well made, with a better price. 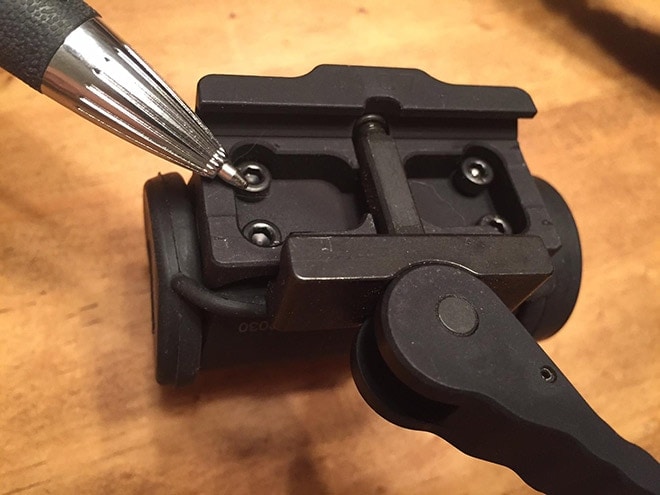 Having a red dot on the AK made engagements, especially at 50 to 100 yards, much more efficient. With a clear optic, I was able to get on target and deliver rounds as fast as my current level of skill allows. That’s fast enough to not time-out on any aspect of my state’s law enforcement daytime carbine qualification. In fact, the red dot helped me run right along as fast, in some instances faster than, those running M4s. That couldn’t have happened with the iron sights, as visually acquiring them proved a time-eating challenge, especially when faced with a dark target that tended to make the sights blend in visually, even with white-out on the front sight post. 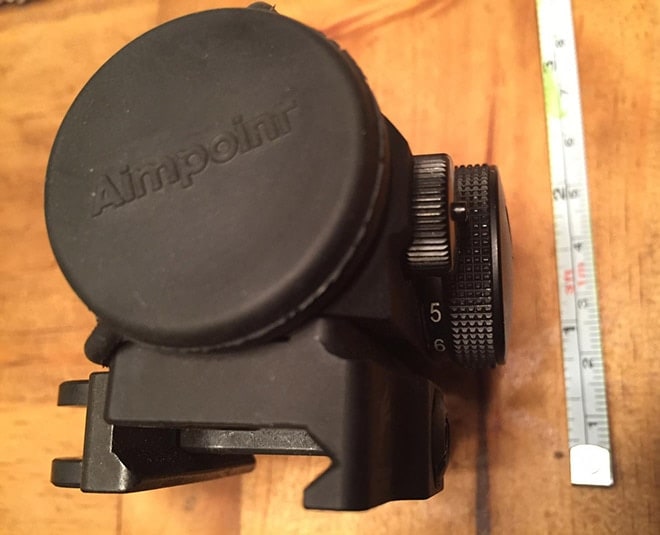 It is as low as low can go. (Photo: Eve Flanigan)

The only drawback to this system became evident during our accuracy test, all of which was conducted in the prone position. While firing three- and five-shot groups from 25 yards, groups done with the sight were fair, at 1.5 inches. However, using only the iron sights, the group tightened to a single hole. It was my training partner who noticed a slight vibration of the red dot during trigger reset. We tightened down the works, with me finally recalling that the ADM mount had come with a sample of a screw-locking solvent and advice to check its screws after initial use. I had neglected that. 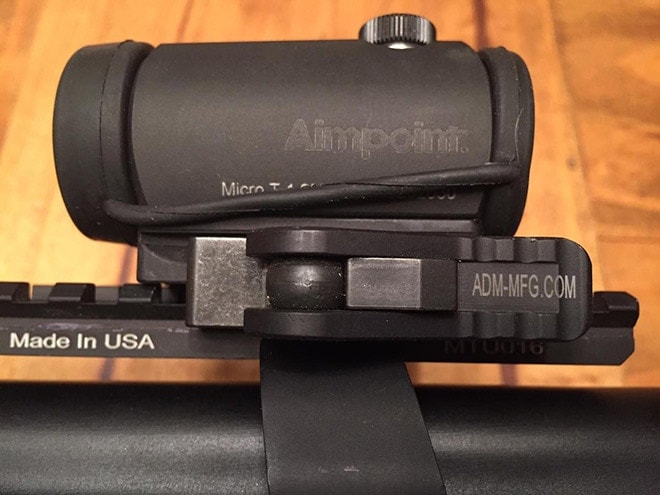 With the whole works now effectively screwed-on and doubly secured with Vibra-Tite VC3 Threadmate, we continued the test. Even with these adjustments, the sight package delivered one group after another of 1.25 inches. On a rifle made for battle and home protection, this system helps a shooter deliver combat-accurate shots, if not precision rifle-style accuracy. With a flick of the wrist, the UTG mount can be removed, with the ADM mount and Aimpoint still attached. Having this sight setup made it possible for me to clock very good times on the carbine qualification as compared to using the irons alone. Center-mass accuracy was retained as speed increased.

Both the American Defense Manufacturing Aimpoint Micro-T1 low mount and the UTG rail mount are good performers, improving the AK experience while being easy on the wallet.