Part of what makes the AK platform so successful is the gun’s iron sights.  But mounting optics has always been less-than-ideal.  The side mount rails can be cumbersome.  And once they’re mounted, they greatly restrict access to the inside of the receiver.

Parabellum Armament has perfected a top rail for the AK platform that allows for the use of iron sights and the mounting of many different kinds of optics.  The machined aluminum AK Adaptive Rail System (AKARS) pins in place of the rear sight and attaches to a replacement dust cover.  It isn’t the easiest to explain, but it takes only minutes to install.

The AKARS Dust Cover and Rail.

The AK Adaptive Rail System is easily pinned in place of the rear sight.  The pin allows the mount to flip up and down.  On the other end, toward the buttstock, the AKARS attaches to a replacement dust cover that comes with the rail.  The cover has a small cut out that holds a sliding block that pins the rail to the top of the dust cover.

With the AKARS pinned and secured, the rail is remarkably solid.  But the dust cover is still free to flip up.  Once up, the dust cover can be removed and put back as easily as any AK cover.  This allows you to field strip the rifle without removing the rail (and sight).  When you replace the dust cover and re-pin the rail, you optic returns to zero.

Getting the Rear Sight Off

We installed the AKARS on a Saiga SGL21-61.  The AK is solid.  It originated at Izmash, was imported and rebuilt by Arsenal in Las Vegas.  We picked up from K-Var, one of Arsenal’s leading distributors.

Getting the rear sight off of the rear sight block wasn’t as easy as I’d thought it would be.  There are videos online of people simply pushing down the springs and popping out the sight.  Easy. 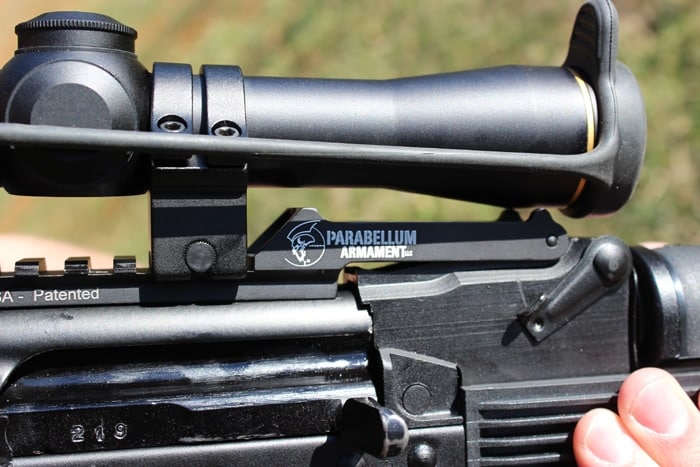 But the spring on the SGL21-61 could be used as a diving board.  After more than half an hour, we figured out how to brace the gun on the ground and depress the spring (which required all of my weight), and how to remove the sight (wich required a separate pair of hands).  It was a two man job.

Mounting Optics On the AKARS

The AKARS allows a strip of rail equivalent to that found under a carrying handle on AR.  If you want something farther forward, it might be useful to use cantilevered mounts.  We put a Leupold FX II Scout optic on the Saiga SGL21-61.  With the AK’s short NATO length stock, and standard mounts, it was difficult to get the eye relief needed behind the optic.  But not impossible. 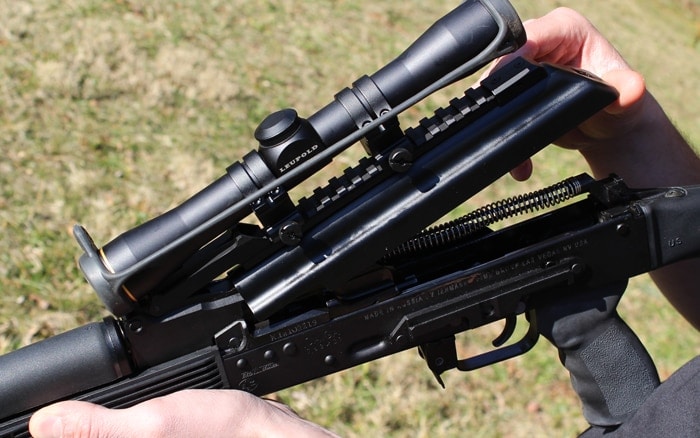 It works well with reflex sights.  But it is time to open up the AK. A solid rail will allow for much more precise shooting with an actual scope, which should greatly increase the reputation of the AK platform’s ability to work at longer distances.

The SGL21-61, for example, is an incredibly accurate 7.62.39.  Even with the stock iron sights and bulk ammo, this AK performs as well as many of the AR-15s I’ve shot.  Why limit the gun to close quarters distances?  Let it breathe.

Shooting With the AKARS Iron Sight

But trust the iron sights, too.  There’s no real reason to mount a rail on an AK if you don’t intend to mount an optic.  Yet the AKARS replaces the rear sight with its own sight.  So if your optic fails (as did a red dot we had in to review with this rail), you can pop it off and keep shooting.  It isn’t adjustable, so you will have to compensate for any elevation change with the front sight post.

The rear sight on the AKARS is a U shaped cut with a white alignment marker.  Line up the white line with the front post and you’re combat accurate.  Take the time to adjust elevation and groups tighten in.

None.  I saw the AKARS at the SHOT show this year and liked the mechanics. But you never know with display models.  Sometimes companies cherry-pick the examples they show, and the actual fit and finish of the products they are shipping varies.  And consider the variations in the AK platform. 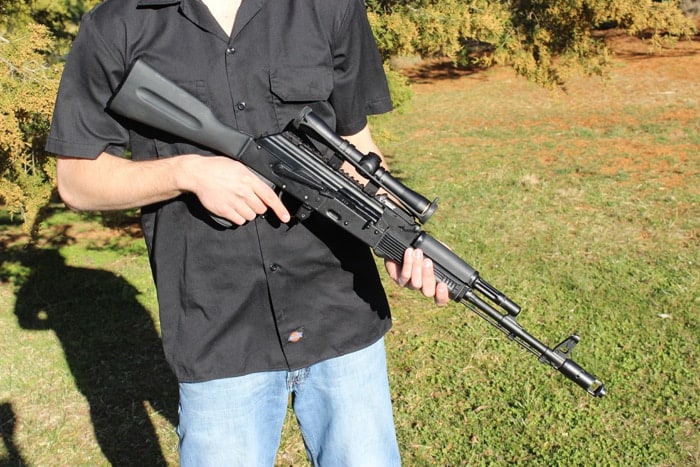 That has to cause occasional fit issues.  But the dust cover fit perfectly, and the attachment points were secure.  The pin slid in snugly (and Parabellum Armament even includes a second pin, in case the first shoots loose).

In short, the AKARS rocks.  It is easy, durable, and makes your AK incredibly versatile.  The AKARS retails for around $130.  But it is hard to put a price on the versatility it allows.