Gear Review: Phone on the range — an amateur’s review of ballistic apps 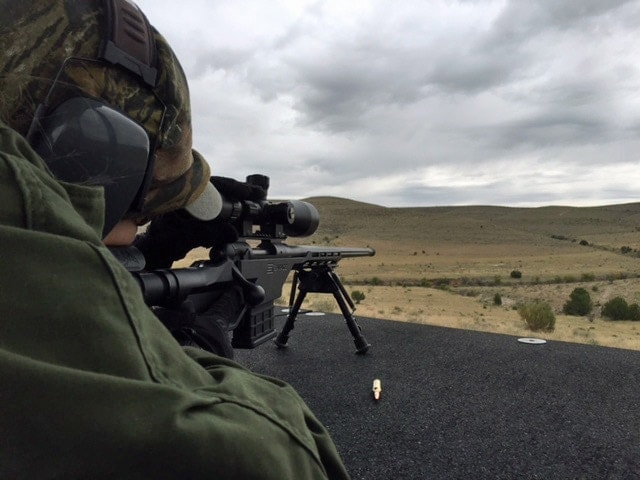 Reaching way out there with the capable Savage 10BA Stealth and Bushnell Elite Tactical LRS scope put these apps through the ringer. (Photo: Eve Flanigan)

Most of us have, by the time we’re old enough to be perusing gun blogs, done something way outside our comfort zone in the name of love. I love rifles. I do not love math. Admittedly, these preferences go together with the same level of harmony as ketchup and chocolate cake.

In the past several months, I’ve found myself in permanent or temporary possession of a couple love-worthy rifles and optics. I also ended up carrying a phone loaded with two ballistic apps. This is a summary, from the perspective of someone who’d rather gauge shots by Kentucky windage than an Iphone, of experiences with the apps that showed up in my life this year: Strelok, Trasol, and to a small extent, Shooter. It’s been a labor of love — with a lengthy gestation. 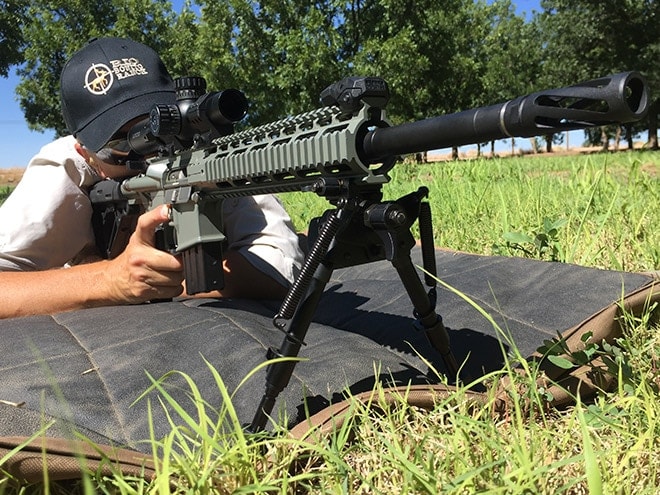 It means “shooter” in Russian. This app is available for $4.99 in the basic version but Strelok Pro is $11.99. They’re available for Iphone and Android. Speaking of a labor of love, this app is apparently the product of one guy named Igor Borisov.

This was my first rifle app experience. I downloaded Strelok based on some forgotten YouTube recommendation while testing the Lucid L7 mid-range scope, the first AR scope I’ve used that presented an intuitive transition from shooting the same gun with iron sights with the substantial advantage of 1-6x magnification.

The Lucid optic is MOA-based, both on the adjustment knobs and in the reticle. Strelok proved to be a good partner on the range, as I was able to plug in the information I knew about bullet weight, muzzle velocity, and local altitude. Though I didn’t use the wind and slope values, they are an option. 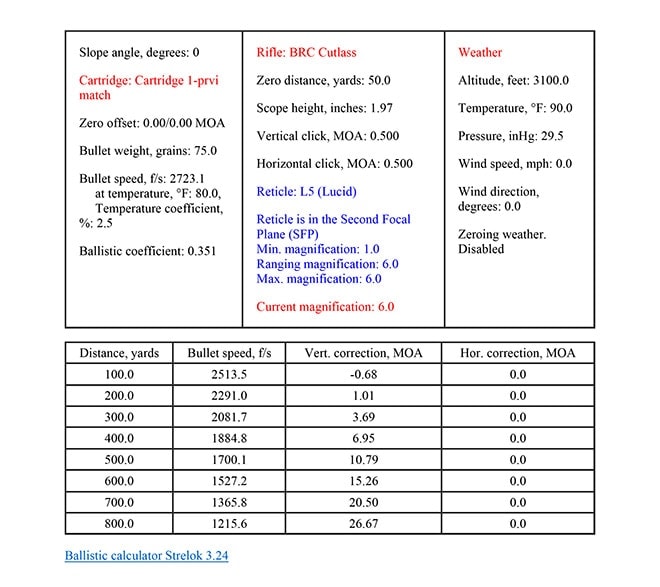 Strelock ballistic chart: pretty easy to read on the phone but kind of bulky in print. (Photo: Eve Flanigan)

What I found especially useful for a new user is Strelok’s inclusion of the actual reticle of the L7 scope in the options. The app will depict, if you like, your specific reticle superimposed upon—get this—the target of your choice. Target choices are admittedly entertaining and it’s fun to flip through my reticle on an IPSC silhouette: a gopher, a coyote, an antelope and (as if anybody would ever use .223 on one) an elk, among others. The target choice diagrams would be a good teaching tool as well as being useful in the field.

A slider on the screen shows holdovers for each possible level of magnification for my specific scope. It’s information you need to know before putting the crosshairs on an animal, but it’s also a good reference to have stored in one’s mind before heading into the woods. Maybe I’ll engage the fox at 25 yards, for example, an appropriate time for 2x magnification. But if the fox emerges at the far edge of the field, I need to have memorized my 6x holdover. Having had a visual reminder is useful at least to my way of thinking.

Strelok did produce a nice ballistic chart that’s large and easy to see in broad daylight. However, it only goes to 800 yards, in 100-yard increments. Again, it’s not as if I’d be firing my AR at that distance, however another rifle I’d later test would benefit from a chart that goes to 1,500 yards or more. 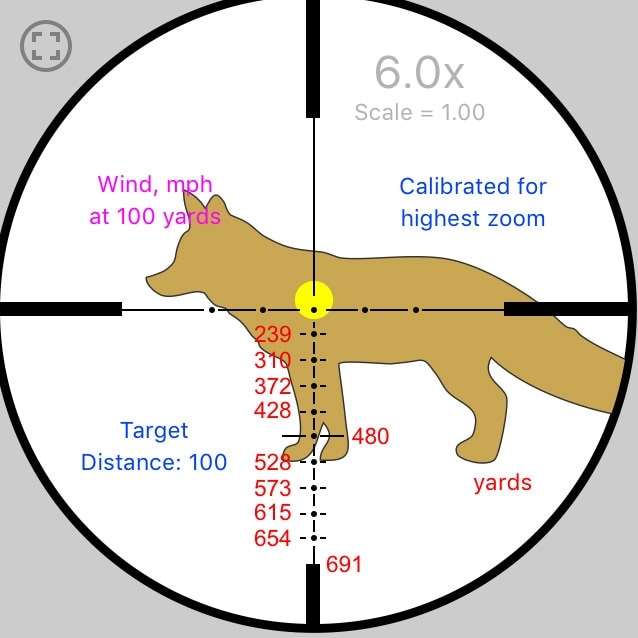 When a new rifle and scope were added to the stable, a Savage 10 BA Stealth in 6.5 Creedmoor topped with the outstanding Bushnell Elite Tactical LRS 6-24x 50mm scope, the distance and magnification game was stepped up immediately. I was unable, without consulting a manual, to figure out how to get Strelok off the Lucid L7 data to enter the new optic. Keep in mind, this was happening on the shooting bench and not in the comfort of an office. I emailed the Lucid data to myself from the app (which they all do) so as not to risk losing it, and proceeded to attempt data entry for the Bushnell. It was discouraging to find this reticle not yet included in the Lucid options. By then, another app had come into my life, so I switched to it. Disappointing, because I’d been looking forward to seeing the Bushnell scope’s first focal plane perspective superimposed on Strelok’s sample targets.

In my estimation, Strelok is a good starter app and ideal for shooters looking for help in building a DOPE chart for their mid-range rifle. It will likely be preferred by shooters who tend to visual learning and orientation.

The ballistic app of Trajectory Solutions by Desert Tech, has an interface that looks more like a calculus textbook when compared to Strelok’s simple geometry entries. However, Trasol was also ready to handle the bigger job of the Savage rifle and mil-to-mil Bushnell optic. 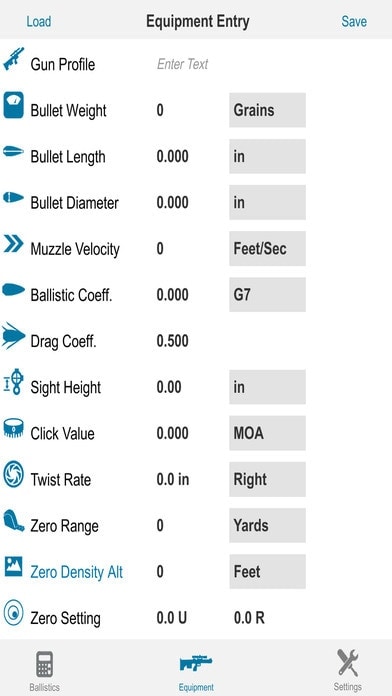 The app wanted to know more information than the manufacturer even shares — bullet length, for example. Unable to find that information online, I contacted my friendly Federal Ammunition rep to request the bullet length of American Eagle’s 140 grain open tip match load.  He gave it, but with an if-you-share-this-we’ll-have-to-kill-you type of message.

Trasol also lets the user input the speed and direction of the target itself. It’s a rare instance when a civilian has the luxury of even knowing such data, let alone time to enter it before the target disappears entirely. Created by a veteran, for whose service I am grateful, Trasol has obviously been influenced by military applications. While the sheer volume of available inputs is impressive, things like target speed and angle don’t translate in practical fashion to game hunting.

With privacy settings off, Trasol automatically calculates density altitude and other environmental aspects. It interacts with the phone’s camera to assist with range calculation, though I was never able to get this function to work on the range. The app interfaces with heads-up displays on helmet units, where that would probably be a practical choice. Nighttime hunters might make great use of this app. 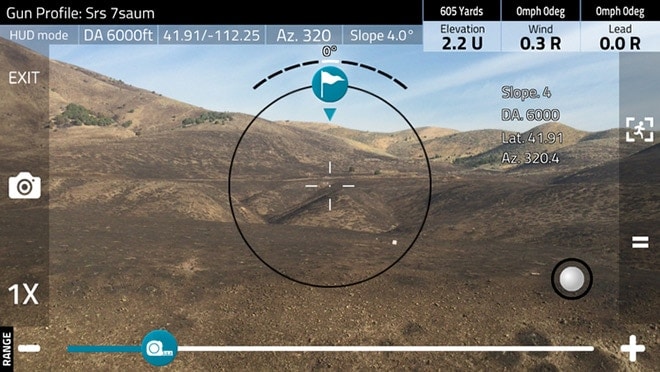 Getting the Trasol camera interface into play was just too complicated when there was shooting to do. (Image: Desert Tech) 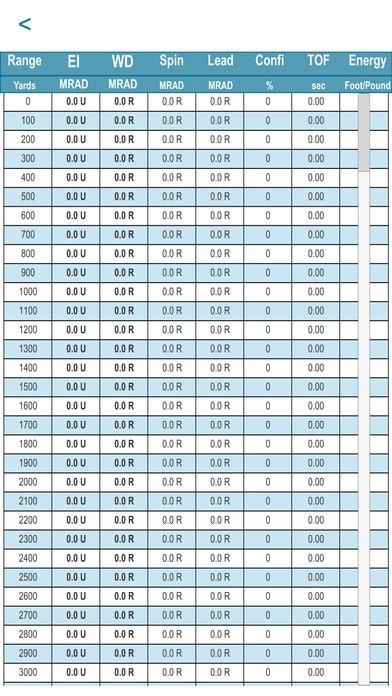 Top of the Trasol ballistic table. It’s just as small in the field too. (Image: Desert Tech)

Trasol is long-range oriented, and will even calculate Coriolis effect based on automatically detected altitude — a function that’s cool, but unnecessary even as I fired the Savage on a 10-inch plate at 1,000 yards. The app’s ballistics table gives adjustment recommendations from 100 to an astounding 3,500 yards. Unfortunately, this, the most useful part of the app, doesn’t zoom in with a fingertip touch. It was thus nigh impossible to see on the range. My long-range expert friend, squinting at the table as we faced downrange, seemed to read my thoughts when he said, “this was made by someone with young eyes.”

Trasol is $9.99 per download, for Iphone and Android. Shooters who know their equipment’s technical specs and are mathematically minded will likely prefer it over Strelok.

This is another app that deserves mention, though I’ve not personally downloaded it. My friend, who’s an expert with long range precision rifles, used it alongside me as we stretched out the range of the Savage 10 BA Stealth. 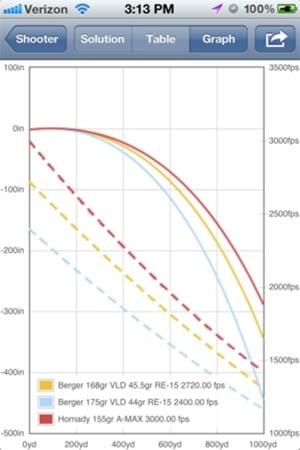 Where appearance is concerned, Shooter is comparable to Trasol, with the important difference that the ballistic table is zoom-able. It was therefore quite useful in real-world conditions as the setting sun glared off his phone screen.

As with Strelok, and probably with Trasol too, (and although the “how to do it” isn’t immediately obvious) the Shooter ballistic chart is easy to email. The printed-out version has become the range companion of my Stealth/Bushnell setup. For what it’s worth, the Shooter and Trasol recommended holdovers for this rifle are extremely close, with Trasol’s being slightly more conservative. Over time, though the data for each was entered on the same day, the saved data in Trasol has been closer to accurate when temperatures are down and humidity is high. The Shooter chart is ideal for fairer weather.

Shooter is $9.99 for Iphone and Android. The Android version will even interface with Kestrel weather detectors with the download of a Bluetooth plugin.

My effectiveness and enjoyment of rifle shooting was enhanced in recent months by the use of ballistic apps, especially thanks to the assistance of a rifleman who’s experienced with them. While the apps save onerous hand calculations and therefore open the opportunity for a shorter trip between 100 yards and more challenging distances, they are a tool and not a substitute for good marksmanship. This is especially true in rough weather or hunting situations when having a phone in hand isn’t practical. It’s a good idea to enter and save available data for a rifle/scope/ammo combo and then print it out for range reference.

There will surely be readers with superior rangecraft skills who deem these conclusions incomplete. These are simply the initial observations of a range rat who, until this year, was usually seen using the SWAG method of ballistic reckoning. I’m no more a musician than a mathematician, but I did learn that anyone can play “phone on the range” well enough to make range time more enjoyable.