You have to keep things clean.  While it’s a good idea to break your guns down to a pile of loose steel pins and springs and fire up an old fashioned sonic jiggle bath, that isn’t always an option.  Sometimes you need something faster.  Easier.  One-and-done.  And wouldn’t it be nice if the cleaning device was conveniently portable so you could do easy field maintenance? 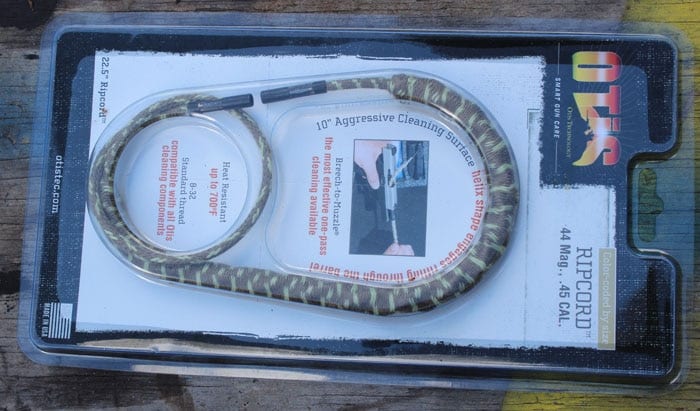 Otis Technology has you covered.  The Ripcord is an aptly named one pass cleaning solution that is surprisingly effective for basic field cleaning.  Simply thread the long skinny end into the breech and push it out the other end.  Grab is firmly and give it a solid tug.

When the fat midsection of the Ripcord hits, it scrubs out burnt powder and debris.  After the initial portion of the cord clears the really grimy gunk, the rest swabs out the barrel, leaving it amazingly clean.  It does in one pass what used to take multiple passes with a traditional cleaning rod. 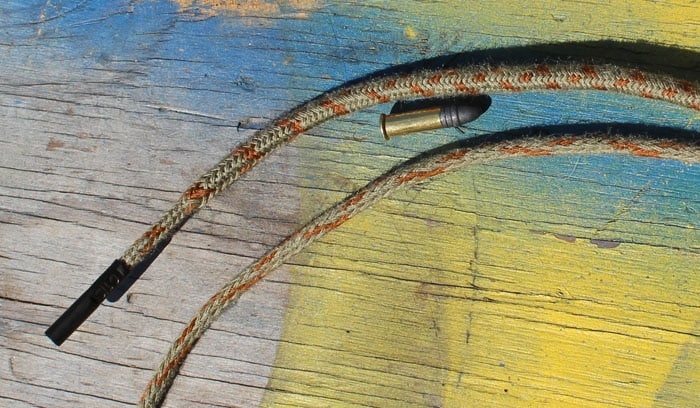 The cord itself is braided from Nomex.  Dupont makes the high-tech fiber, which is trusted for its flame resistant qualities.  The Ripcord can stand up to temperatures as high as 700 degrees, but the Nomex is also resistant to both wear and the chemicals often associated with gun cleaning.  The brass ends won’t spark against the steel, so there’s little chance of accidental conflagrations. 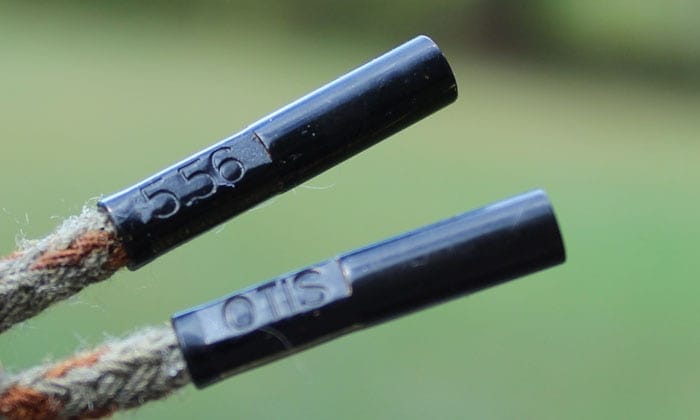 Inside is a rubberized core.  The working section of the Ripcord is ten inches long, which provides a good surface area for cleaning.  The helix shape of the cord is designed to grip and turn in a barrel’s rifling, which adds to the appeal. 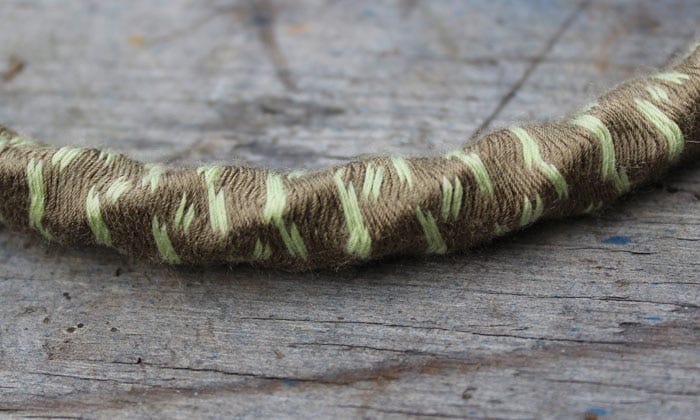 I’ve used bore snakes before, and I’m a big fan.  That said, there isn’t that much of an advantage of a wire brush bore snake over a cleaning rod.  The brush section is usually the same length, and the loose nylon material of the snake picks up some of the fouling, but not all of it.  It is more convenient than a rod, I find, but that’s about the end of its appeal.

But the Ripcord feels much more substantial.  While there no aggressive scratch, as there is with most brass brushes, the Ripcord feels like a plunger.  As the fat end enters the breech, it locks up.  A good tug seats in in place.  Pull harder and it bulldozes its was toward the muzzle. 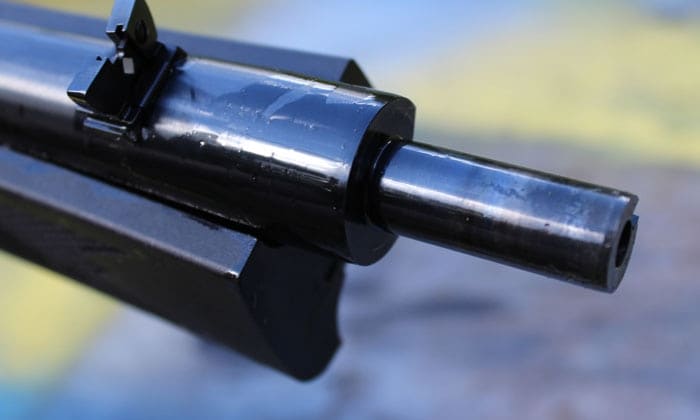 Spraying the Ripcord with cleaning agent will illustrate just how tight the fit is.  If you have a lubricant or cleaner on, it will squeegee out as you pull.  I’d sprayed the barrel of this 10/22 with some nitro solvent.  I’d had the gun in for several weeks, and had shot up what remained of my .22LR, but hadn’t cleaned it at all.  It was getting a bit sticky.  The .22LR is a nasty, dirty round.  And unplated bullets are notorious for leaving heavy lead deposits in barrels.  But I don’t know anyone who actually cleans their rimfire rifles while they’re still shooting. 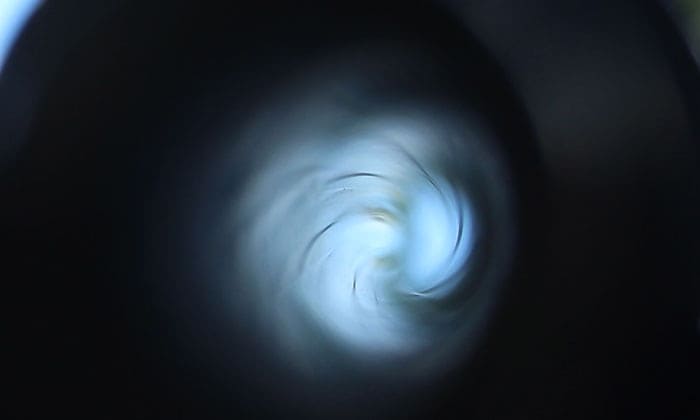 Yet one pass from the Ripcord and the mirrored finish in the Ruger’s barrel was back.  Apologies for the blur.  It isn’t easy to get a picture of the inside of a .22 barrel.  It is actually easier in a truly filthy barrel, as the reflective surfaces aren’t swirling all of the various surrounding colors. 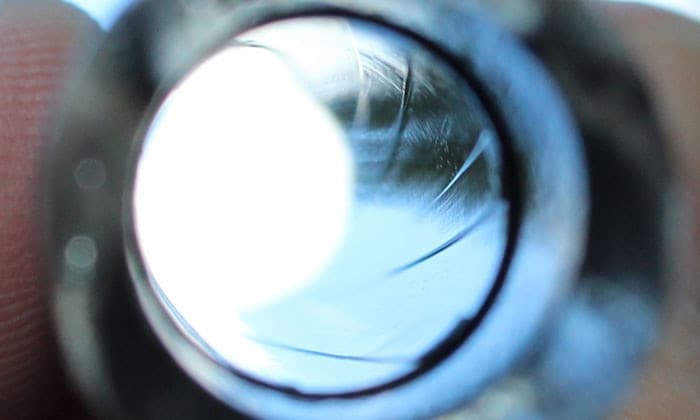 It is easier to see in the .45 barrel.  The Ripcord isn’t going to replace a full on cleaning, but it isn’t designed to.  It is meant to help with regular maintenance.  And it does it very well. 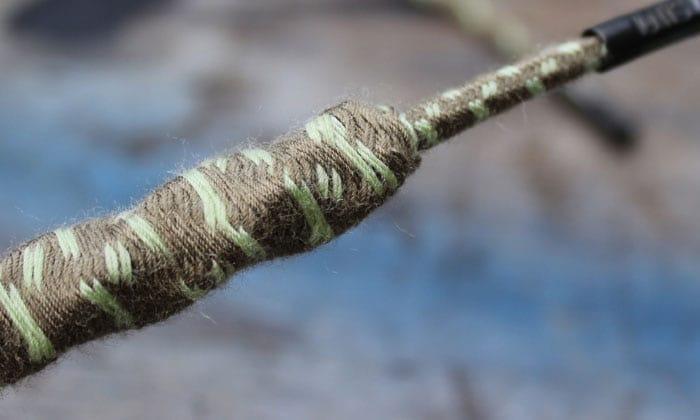 These could revolutionize the way I handle cleaning.  As of right now, I clean in batches.  Sometimes I’ll do a basic field strip, but rarely.  I’d rather get out a couple of guns, open up all of the windows, and sit down in front of the television and watch SEC football.  While I don’t think I’ll break that habit, I know I’ll be making a quick pass with the Ripcord before the guns go into the safe.