The RadeTec AmmoControl 1911 round counter grips are impressive.  They work exactly as they’re advertised.  The rubber replacement grips hide some sensitive electronics.  When combined with a magnet that rides beneath the magazine’s follower, the grips can determine how many rounds are in the magazine.

When your index finger presses a button just below the trigger guard, the number of rounds in the magazine displays on a small digital screen on the right side of the grip. 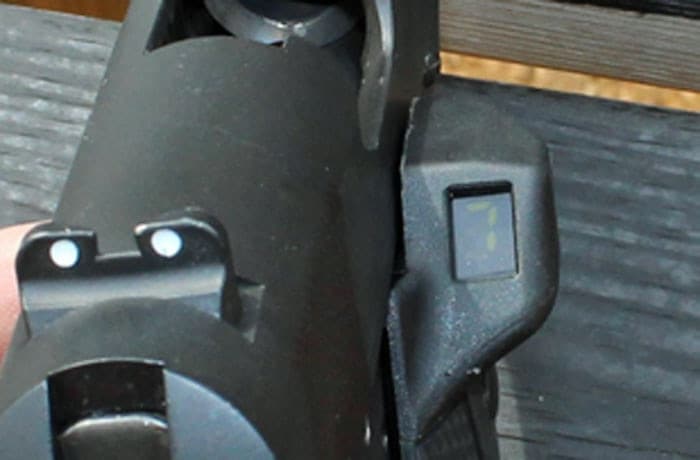 If that’s not cool enough, a second button on the right grip panel will tell you how many rounds have been fired through the gun since the grips were installed.

The big question surrounding RadeTec concerns practicality.  The technology is fascinating, but are the grips actually useful?  I see two or three ways to use the RadeTec AmmoControl grips. 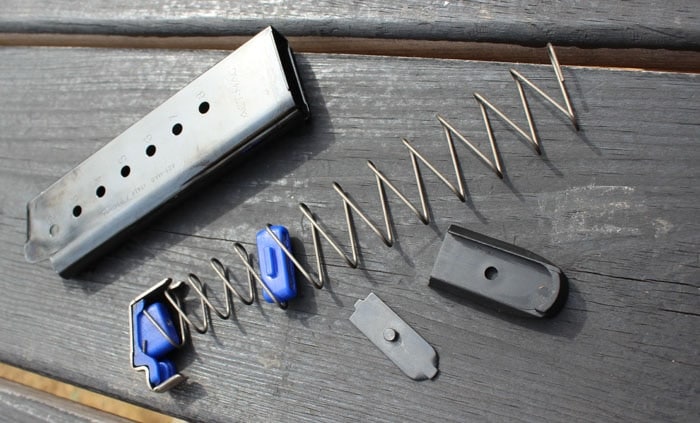 If I were using a 1911 (or a Beretta 92FS) in a duty situation, I would consider using these grips. In a stressful situation, I could easily lose track of my round count. For those who fire and move, then fire some more, counting rounds might not be a primary concern.

It would be nice to look down and see.  Immediately.  While this isn’t as necessary in a single stack 1911, it would be great on a Beretta 92FS where there are 17 rounds in the magazine. 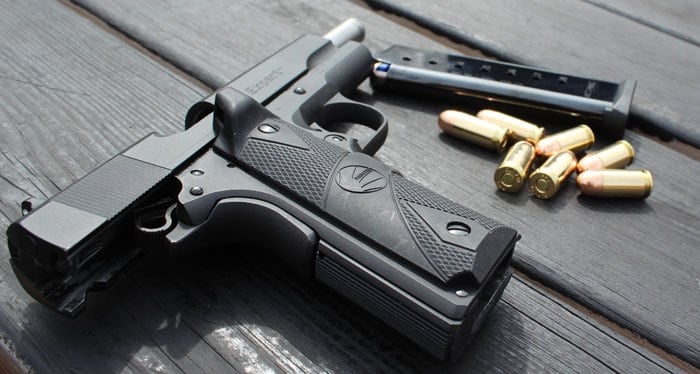 They would also be great for the institutional end of military and law enforcement. While the available round tally is nice, knowing the history of the gun would be great for service history and accountability concerns.

For the rest of us?

The RadeTecs could be useful for any shooter.  Consider this self-deprecatory example.

I can count to seven.  Usually.  I hardly ever lose count of the rounds left in my 1911.  But I have.  Everyone makes mistakes.  Once, while shooting video for a 1911 review, I left one in the chamber.  I was working without an assistant, shooting video for several guns at once, and trying to do too much too quickly.

When I was cleaning up, I picked up the 1911, saw that the hammer was cocked (this happens sometimes when I’m narrating a video and demonstrating functionality on an unloaded gun).  Because I foolishly trust my own abilities, I simply pulled the trigger to drop the hammer.  And it dropped.  On a live round of .45 ACP that, upon leaving the barrel, barely missed my foot.

As it happened, I was negligent. Dangerously sloppy and overconfident.  I’m lucky to have learned a fundamental firearm safety lesson without losing some toes.  Or worse.  There you go.  I admitted it. 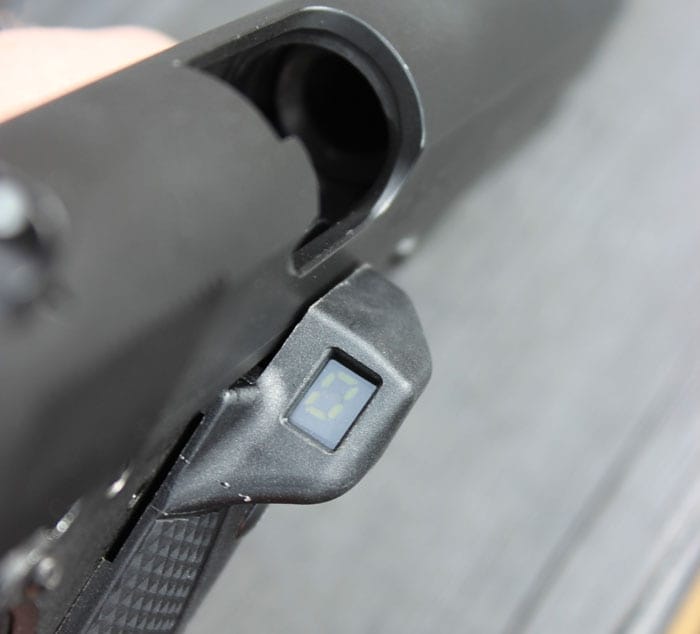 RadeTec grips might not have counted that last round in the tube, but it may have registered earlier and reminded me to clear the gun before hand.

Shooting with the RadeTec Grips

The rubber grips that house the electronics provide a reasonable grip, though they aren’t as textured as many 1911 grips.  The front strap that houses the display button is unobtrusive.  We installed the grips on a Para GI Expert. 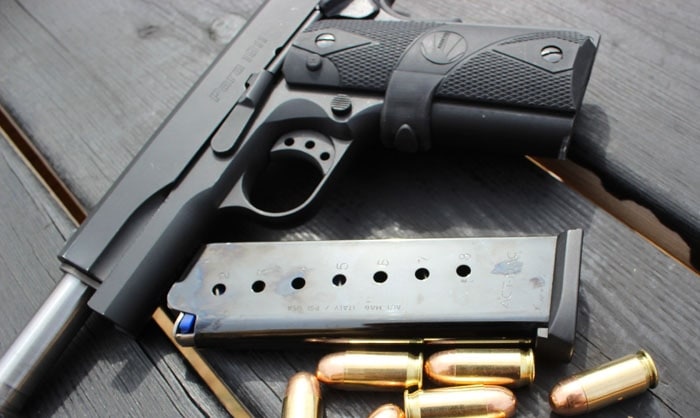 It takes just a split second to reference the available round count.  Glancing down will take your eyes off the target and require that you focus on something much closer, but I got used to the action quickly.

The display sticks out form the grip just a bit.  It isn’t enough to cause any difficulty for right handed shooters, as the bump isn’t going to interfere with many holsters.  Lefties may face more difficulties.

RadeTec makes two other products.  One is an indicator light that changes colors as the magazine empties.  Green means good-to-go.  Blue means you’re somewhere in the middle.  Red means time to fill up.  These could potentially be game changers for the industry.  RadeTec currently makes them for Glocks, Smith & Wesson M&Ps, Beretta 92s and 1911s.  But there’s no reason why the technology couldn’t be incorporated into any pistol (or rifle, for that matter).  These LEDs are much smaller, and even less obtrusive that the round counters.

They also make a more complex round counter that installs on the magazine well of an AR-15.  We have one of those in, too, and will be test-driving it as soon as we find some .223 to burn. 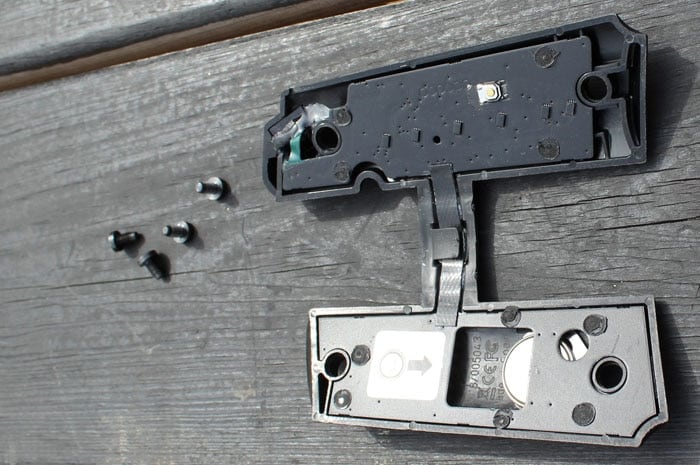 If I have one practical criticism for RadeTec, it would be the choice of grip material.  The rubber is logical, and allows for the flexibility needed to incorporate the front strap button.  But I don’t like rubber grips.  There are too many better options.  I’d really like to see RadeTec grips with the incredible patterns and textures available form companies like VZ Grips.

The technology isn’t cheap.  Radetech’s 1911 grips are selling for $260.  Extra magazines go for $29.  But what RadeTec offers is hard to put a price on.  Check them out.

Special Thanks to Bob Lawman and Firearms Novelity for their assistance in this review.