It is hardly news when a well mad scope works well.  Or that a Stag 3G, an excellent long range sporting AR, is capable of making accurate long range shots.  We typically take these sorts of things for granted.  After all, that’s why we shell out so much for shooting sports.

But Redfield isn’t yet a household name, so to speak.  And it should be.  Redfield has a tradition of making solid sporting scopes.  Their recent acquisition by Leupold has given Redfield a huge leg-up in the industry.  They now have all of Leupold’s experience and resources.  And Leupold, in return, has a lower priced brand that the venerable optics company can put their reputation and name behind.  The Redfield lifetime warranty alone makes the scopes worth a look.

And Redfield is branching out.  As more civilian shooters get into the sporting and hunting sides of ARs, a new market has opened up.  These shooters want the accuracy and abilities of a traditional 3-9×40.  Yet they need scopes that are specifically set up for the .223.

The Redfield Battlezone is just such a scope.  It is a 3-9x42mm.  The multi-coated lens reduces glare.  The nitrogen filled tube keeps out fog and moisture.  And it is guaranteed.  Redfield guarantees their products against defects, for the life of the scope. 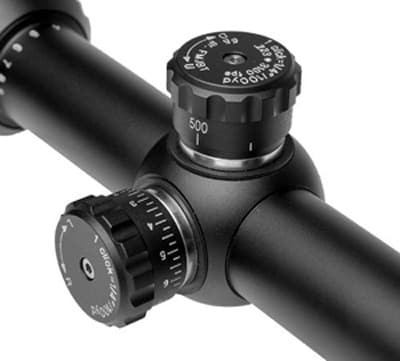 The main tube is one inch in diameter, so rings should be easy enough to find.  The scope requires 3.5 inches of eye relief, and it will need high mounts.

The front lens needs a good bit of clearance off the top of an AR, so high rings are a must.  Or medium rings and a riser pad.  But there’s plenty of room for the scope and back up irons, or angled sights, too.

At 100 yards, the Battlezone offers anywhere from 11 to 33 feet of field-of-view, depending on the magnification.  Typical distances for those familiar with the 3-9×40 hunting scopes.

At just a hair over a foot long, the Battlezone weighs in at less than a pound, so it won’t add much weight to a gun.  And it is hardly fragile.  While I’m not sure I’d take it into an actual battle zone, I wouldn’t hesitate to take into the field, or to use it in any sport shooting.  It is a durable a rugged scope.

The TAC-MOA reticle is marked at two MOA, to allow for bullet drop and windage.  The Bullet Drop Compensation System is specifically calibrated for .55 grain .223 rounds with a muzzle velocity of 3,100 fps.  It is calibrated in 50 yard increments.

In addition, each Battlezone comes with a separate dial for 168 grain .308 at 2,650 fps.  The nobs are finger adjustable, and have positive clicks so you can feel the adjustments without looking at the dial.  The dials are calibrated for 1/4 inch MOA adjustments.

We’ve had great results with the scope.  At 100 yards, the Battlezone and the 3G combine for tight groups right at an inch.  At 200 yards, they open up a bit, but stay under two inches.  At 300 yards, my groups widen, but I’d still be confident enough to hunt predators or varmints at that distance.

The video above is from 200 yards.  We were shooting some clays out in the rain.  Even in the steady downpour that ensued, we had no fogging, and no other rain-related issues.  Even when the front lens had water on it, we were still able to shoot accurately.  And this is from the bed of a pickup, with just the bi-pod for a brace. 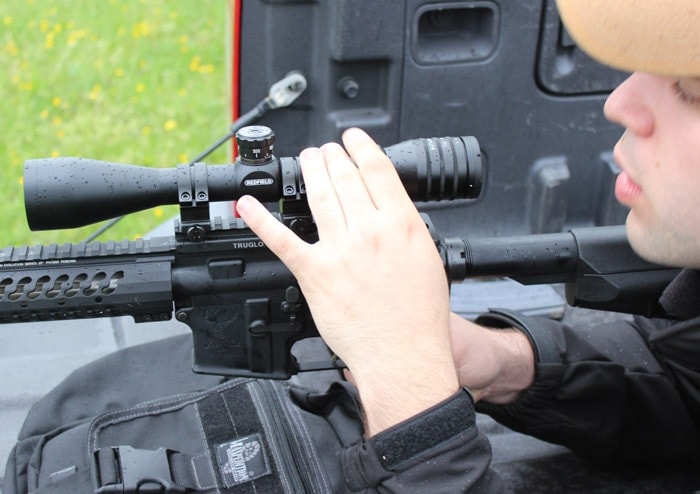 We had targets, too, but couldn’t get them to stick to much.  The .223 just passes through the center of the one clay.  It took three shots to dust it, as the bullets were going through the center and not the thicker rim of the clay.

The Battlezone is calibrated for shots out to 500 yards.  And I trust that it is capable at that distance.  I’m not, but the gun and the scope are.

The most attractive thing about the Battlezone is its performance, obviously.  But that performance has to be measured against its price.  The Battlezone sells for less that $200.  Sometimes as low as $165.  This type of performance at this price is hard to find.  And it is backed by Redfield’s warranty.  For many shooters, this combination of price and ease of use is going to make the Redfield hard to pass up.