While there are other 25-round magazines on the market, they don’t always work well.  Fans of the venerable rimfire rifle have been waiting patiently for Ruger to make their own extended magazine for a long time.  The BX-25 is here, and after the weird supply-and-demand issues of last year eased a bit, the BX-25 is actually available in many stores.

So was it worth the wait?

The Ruger BX-25 is a 25 round, .22 LR magazine for the Ruger 10/22.  It is mostly polymer.  The feed lips are steel.  The whole magazine is roughly the size and shape of a banana, and rather square for its entire length.  It doesn’t look like a magazine that would house .22 LR, as it is so wide.

But the length makes it easy to insert and remove.  It rocks in a bit like an AK magazine.  The magazine that comes with the rifle is a complex 10-round box that fits flush with the stock.  When the magazine release lever is pushed, the 10-round box will drop free.  The BX-25 won’t.  It needs to be rocked out, but the motion can still be performed with only one hand. 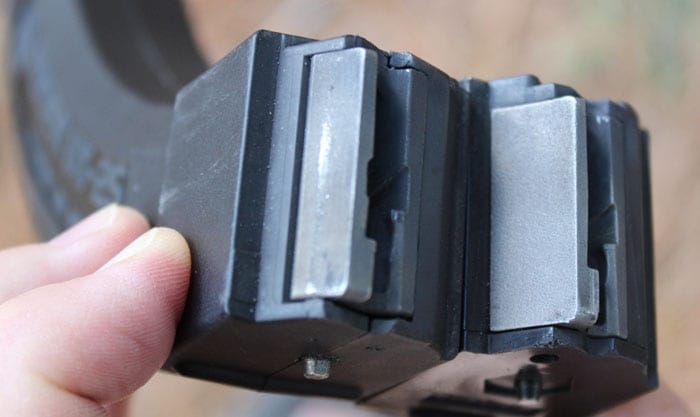 Logic would suggest that the materials and construction of the Ruger BX-25 would mirror those of the Ruger factory 10-round magazine (the BX-1, which is a rotary magazine).  Actually, no.  There are some distinct differences.  The feed lips on the BX-25 don’t extend as far into the polymer as those on the factory magazine.  It shouldn’t affect feeding, though, as the top ends look very similar.   They both are supposed to present rounds at the same 30 degree angle. 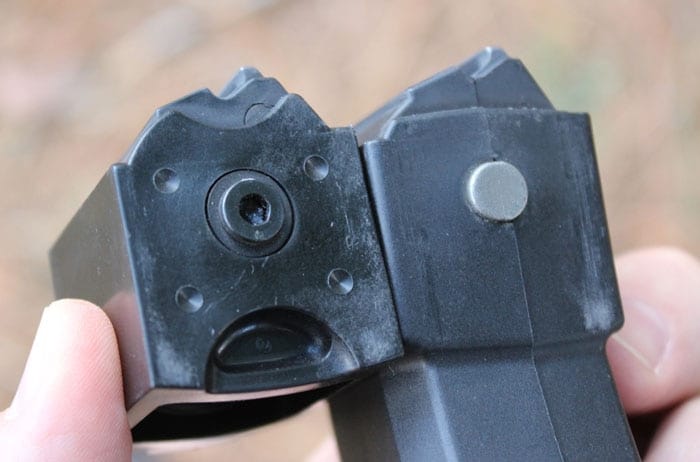 Also the connectors are different.  The BX-25 has a metal pin on the front.  And there is less texture built in, as the mag can be removed by grabbing the body.  There simply isn’t a need for a finger well to aid in removing a sticky magazine.

I’ve fired at least 600 rounds through these two magazines in the last week, and I haven’t cleaned either.  The results that I’m about to mention are not intended, in any way, to be exhaustive.  But I was able to notice some nuances of the BX-25 that were absent form the 10-round box. 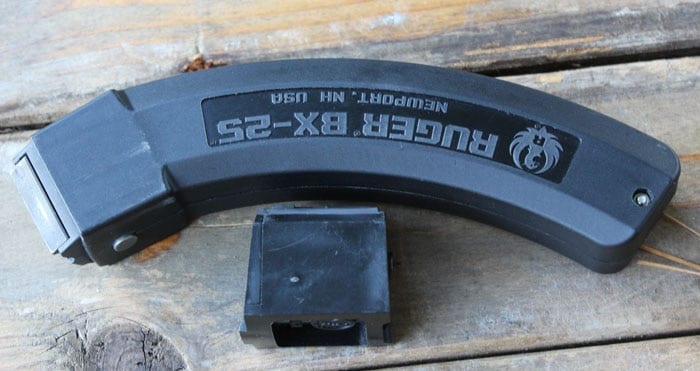 The first would have to do more with bullet shape than with the magazine, I think.  I fired more than 100 rounds of CCI Mini-Mags through the BX-25 and had failures every six rounds (on average). I never made it through an entire magazine without a failure.  The most common problem seemed to be bullets jamming up into the chamber.  This a serious issue with a 10/22, as it is hard to get a finger in the chamber to realign the round, or pull it.  The bolt would often slam home on a stuck round and bend over the bullet, making it impossible to use.

This is not a complaint about CCI.  Far from it.  From the factory magazine, the Mini-Mags ran like a dream.  No failures.  No nosedives.  Nothing. 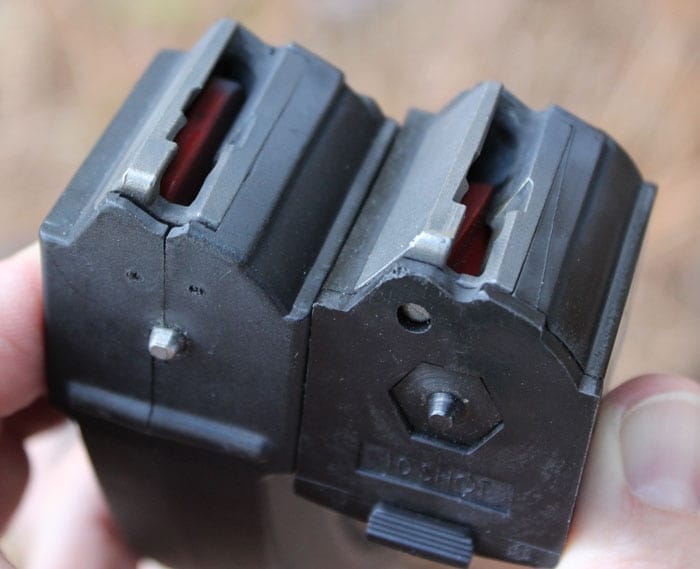 To see if the problem was inherent to CCI, I ran some of their 700 FPS low noise ammo.  The low speed of these rounds isn’t enough to cycle the 10/22’s action, so the bolt had to be worked by hand every time.  While this is tedious, it isn’t that cumbersome.  And the low noise rounds fed easily, every time.

I switched ammunition at that point and tried out some Winchester 40 grain Super-X.  Not a single issue.  I ran 100 rounds through it and only had one dud.  It loaded correctly and extracted nicely, which made clearing the jam very easy.  The Winchester ran well, shot accurately and gave me no trouble. 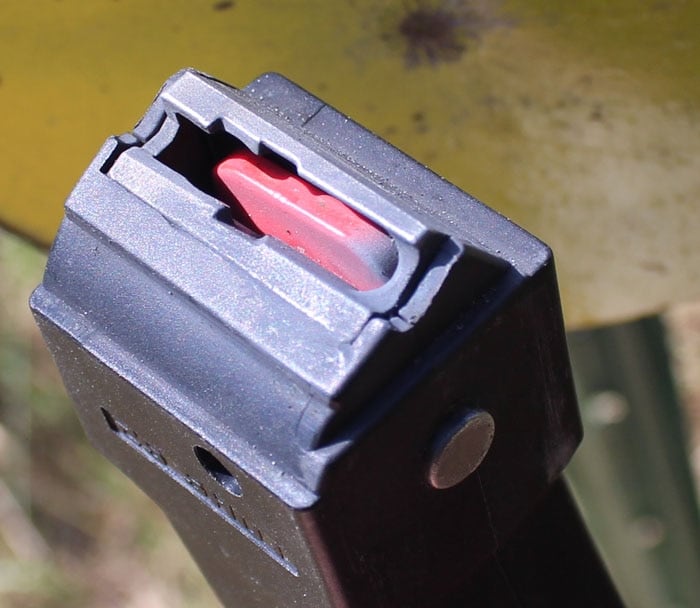 After the Winchester and CCI, I tested a random assortment of other rounds.  Some Remington, some Eley, some Gemtech.  Nothing seemed as prone to failure as the Mini-Mags.  Interestingly, I had no problems at all with the 10-round magazine.

So, more is not always merrier?

The BX-25 isn’t free from bugs.  Not completely.  I’d like to say I understand why.  My guess is that the bullet shape of the Mini Mag round is slightly longer and more square than the other rounds I tested.  But we’re talking about .22 LR, the most varied round in existence.  A good magazine in a good rifle should feed it all.

Regardless of spring tension, which is the logical culprit, I find it odd that one Ruger wouldn’t design the working surfaces of the magazine in an identical fashion.  But I don’t know everything.  Even though I pretend like I do.

The BX-25 is a magazine for the 10/22.  I have to keep telling myself that.  It isn’t an M4 in service overseas.  When a 10/22 magazine has a failure, it is most often a slight annoyance.  Lives don’t hang in the balance.  The whitetail isn’t going to bolt.

The BX-25 sells for anywhere from $25 to $35.  There are often package discounts, which are a good idea.  These things don’t load quickly, so it is handy to load up a handful while you’re watching the latest episode of Downton Abbey so you’re ready the next day to wreck havoc on those pesky tin cans.