I was surprised to find the Sling Band-It retention device on a web page devoted to covering up and caring for tattoos.  But I’m not going to second guess the creative spark.  It is a great idea, and a fantastic device from an unexpected source. 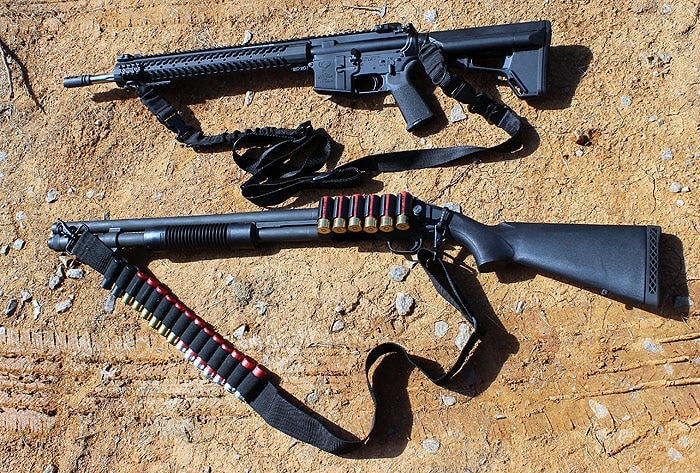 The problem is easy to see.  Slings are messy, floppy, and can gum up the works.  I’ve had to take slings off of rifles in my safe, just to keep other guns from getting tangled up.  But if you shorten slings until there’s absolutely no slack (if that’s even possible) than you have to readjust them in order to use them as slings.  That’s fine if you’re practicing, but not so hot if you need the rifle in a hurry.

The answer isn’t complicated.  The Sling Band-It is a a two part wrap.  One side is webbing, with hook-and-loop closures.  The other side is made of elastic.  Each pack has two of these.  One wrap goes at the bottom of the sling.  The other attaches to the top.  The slack in the middle can then be folded in between the two bands. 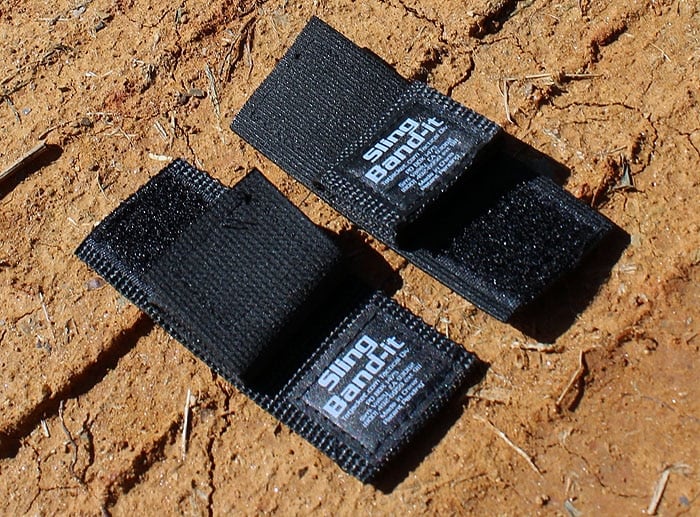 The result is a perfectly organized, very snug sling.  While both bands are firmly attached to the sling (with the webbing loop), the slack is free to move when needed.  Pull on the middle, and the strap comes free.  The bands stay firmly attached to the sling, but the strap is now useable.  In one swift motion, your off hand can free the sling and move it over your head.  The rifle or shotgun goes from tightly contained to ready condition in one movement.

In a perfect world, all slings would be as tidy as the 1-inch webbing that comes with some guns.

For most short shotguns and rifles, I prefer Button Slings.  They’re easy to pop on and off.    Condor makes a great two point sling that I’ve been using on the Stag 3g.  It has buckles that allow for the mid section of the strap to be removed.  And I’ve been using a Blackhawk shotgun sling on my Mossberg 590.  It clips on quickly, and has the added benefit of holding extra shells.

I’ve taken to removing my slings before I put the guns into storage.  But that means I have to take the time to find the sling and get it back on.  But the Sling Band-It ends that.

The Condor is a messy sling.  It has extra buckles, attachment points for converting to one point carry, and some bungee for added flexibility.  The result is a sling that’s hard to tame, even with the Sling Band-It.  But it works. 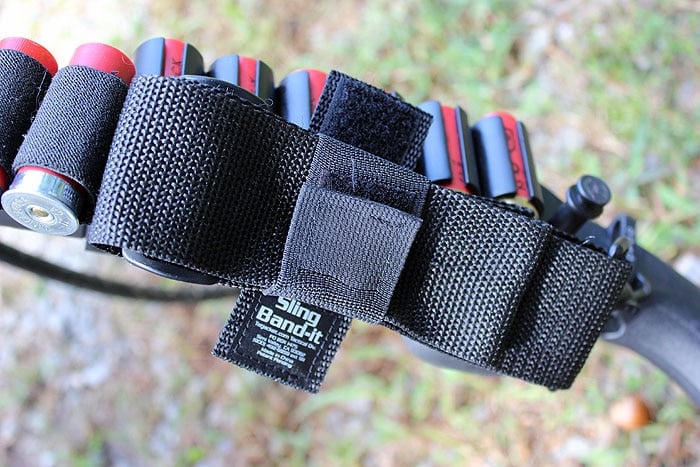 The Blackhawk shotgun sling is wider.  The 2 inches of webbing won’t fit in the webbing side of the Sling Band-It, but it works just as well with only the elastic side.  It only take one to secure this sling.  Even though it isn’t how the Sling Band-It is designed to be use, it still works.

Each package contains two bands, and sells for $9.95.  If space is tight in the safe, that’s a real bargain.  Check them out.