Barry Dueck (pronounced like Duke) is the brains behind Dueck Defense.  He’s a competitive shooter who knows the needs of 3-Gun matches.  He also works at SureFire, where he’s the Director of the Suppressor Division.  Dueck and SureFire have teamed up to handle production and distribution of the Dueck Defense Rapid Transition Sights.

The Dueck Defense Rapid Transition Sights are easy enough to explain.  They’ll be familiar to anyone who has ever used standard M4, or M16A4 sights.  The rear ghost ring has one of two apertures.  The front post is a fairly robust, and protected by wings.  They’re adjustable for 1/2 MOA elevation and windage.  These sights don’t try to reinvent anything except the angle of sights in relation to the gun itself.  And that’s what makes them truly useful. 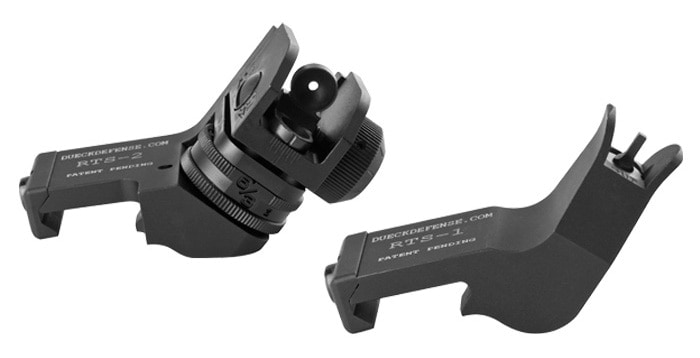 The Dueck Defense RTS system is milled from aluminum bar stock.  7075 aluminum, which is then hard anodized.  Together, they weigh in at almost five ounces.  They are ambidextrous.  If you have rail out on the front end of your gun, like the long Samson tube on this Stag 3G, the RTS is a great way to go.  They install easily with a flat-head screwdriver and have a very low profile above the rail, so there is very little bulk (2/10″) to interfere with mounting a scope. 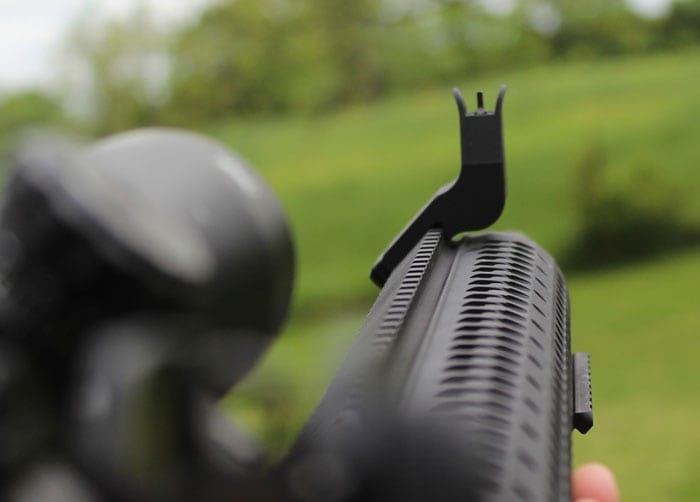 And that’s the real appeal of the Dueck Defense RTS.  Even great backup sights like the Magpul MBUS that dominate the AR scene require a bit of clearance (more like 5/8″).

But there’s another reason to go with offset sights, and that is the speed of deployment.  Shooters who maximize the use of their ARs, shooting at mid-range  distances of 200-300 yards, often want scopes with higher magnification, like this Redfield BattleZone on the Stag 3G.  Yet they often need to use their ARs at closer ranges, say below 100 yards. 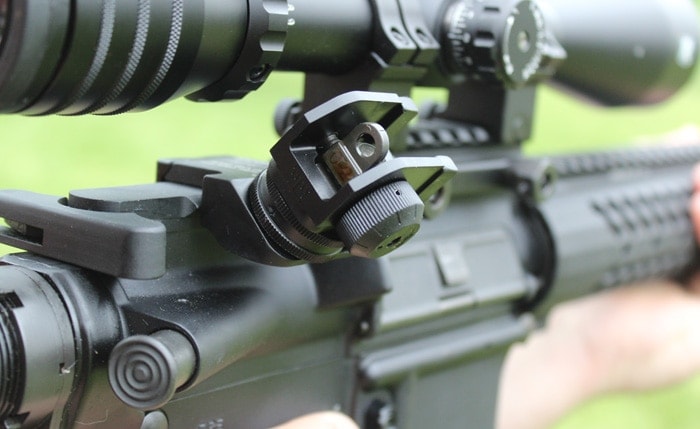 At short distances, a scope is a liability.  Target acquisition takes longer when magnification obscures potential threats or targets.  This is often common in battle, and replicated in 3G competitions.  In these circumstances and sporting events, shooters can’t remove their scopes.  The usefulness of the tool is limited.

And it is considered bad form to ask a potential threat to hang tight while you find a wrench, remove your scope, and flip up your backup sights.

The philosophy behind the offset sight

But the SureFire Rapid Transitions allow for rapid transition.  That’s the idea.  They aren’t backing anything up, exactly, but serving another purpose.  The idea is similar to a scope mount that is milled so that the irons are visible beneath the scope. 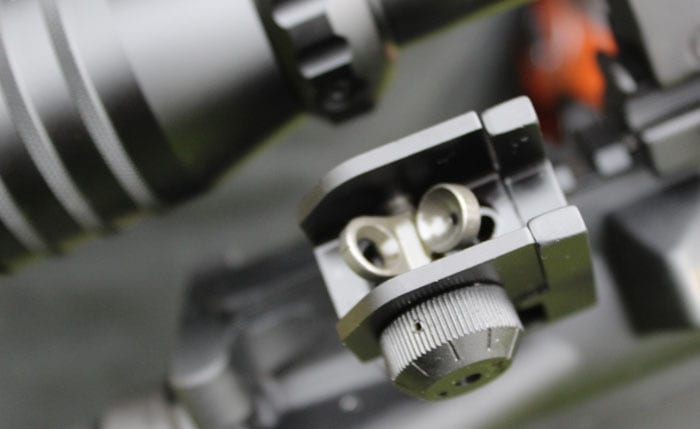 The roll of the backup sight is more appropriate for AR-15s with low magnification optics and holographic or red dot sights.  There, they are good backup.  If the optic fails, it can be removed and the gun can still serve the same purpose with the backups.

But even then, the RTS would serve a purpose.  The only real consideration would be the extra width of the front sight.  On the back end, the RTS fits nicely.  On the front, it hangs out to the side.  The traditional flip -up backup sight has the advantage of staying very securely out of harms way.

Shooting with the RTS

These sights are only slightly more challenging to sight in than regular iron sights.  The difficulty comes from the strange angle of the gun, which isn’t conducive to most vices (which are designed to hold a rifle level).  But even standing, holding the rifle braced (as we did with the Stag), the RTS isn’t hard to sight in. 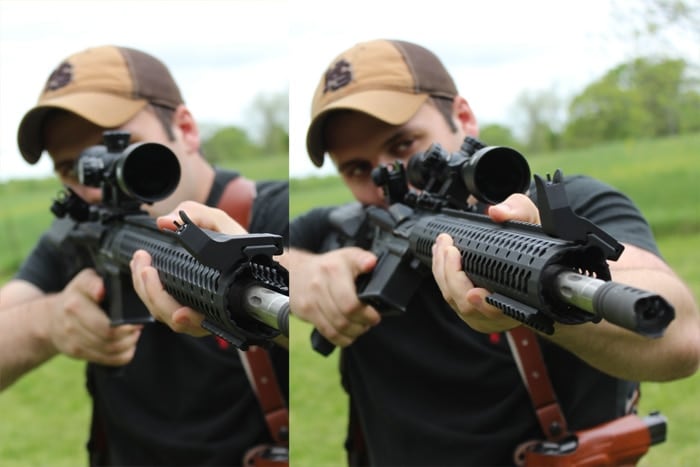 The 45 degree angle of the gun does emphasize recoil differently.  The 3G wanted to move down and away.  It wasn’t muzzle flip as much as it was muzzle dip.

It takes my brain and my eyes a moment to make rapid transitions.  But the RTS becomes habitual.  If you’re already looking through the scope at a target, and simply twist the gun, the transition seems very natural.  If not, there will be a simple target acquisition, as there is with any iron sight system. 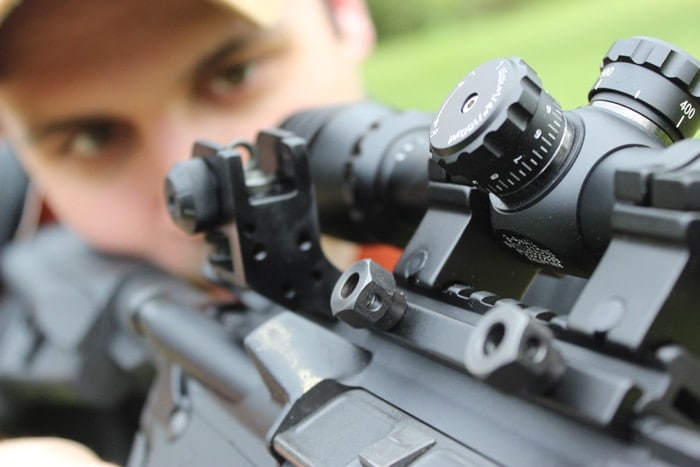 The Dueck Defense sights are the same height as typical AR irons, so it doesn’t feel as odd as it might.

If you’re anything like me, you know you want a pair of these.  They are almost bombproof, and uniquely refined to serve that very specific purpose.  And there’s nothing else that comes close.  You could pick up some offset sections of picatinny rail, and put traditional back up sights on those, but why? The RTS sights are sold as a pair.  Makes sense.  Having one or the other wouldn’t do much for your accuracy.  The MSRP on these guys is $238.  If you lose or damage one (which is technically possible, though no likely), they can be bought individually also.  For the quality, that price is logical.  They’re built in the US, too.  The Dueck Defense RTS is a perfect tool for a very specific job, and there isn’t a substitute.