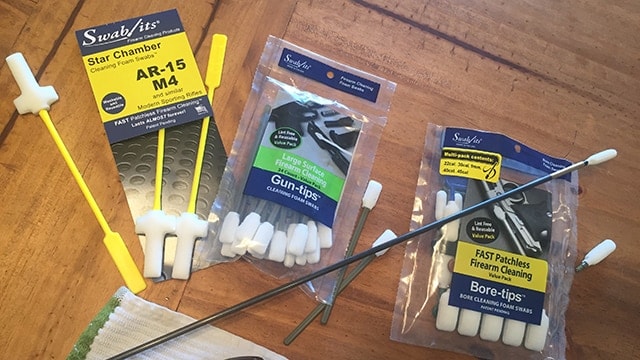 A few of the Swab-its products, except Bore-sticks, ready to get dirty. (Photo: Eve Flanigan/Guns.com)

The folks at Swab-its have found ways to do great things with the simple concept of a sponge on a stick. The Massachusetts company has designed a growing line of tools that can make a thorough cleaning faster and easier—and maybe even healthier. I tried several of their products, including the newest, Bore-Sticks, and was pleasantly surprised.

Most of the company’s products are a caliber-specific foam swab on a plastic rod as a handle. In the case of Bore-Tips, the swab is on a threaded plastic stick that attaches to a cleaning rod. There are also Bore-whips, a swab attached to a flexible length of plastic so the user can pull the swab through a long barrel.  In this test, I checked out four types of swabs.

With a generous supply of different Swab-its, I set out to clean a Ruger 10/22, a heavily soiled AR-15, and a Glock. It should be noted that Swab-its don’t take the place of a bore brush or other heavy duty tools when it comes to cleaning barrel grooves or caked-on carbon buildup—those tools are still needed, along with solvents and lubricants, of course. 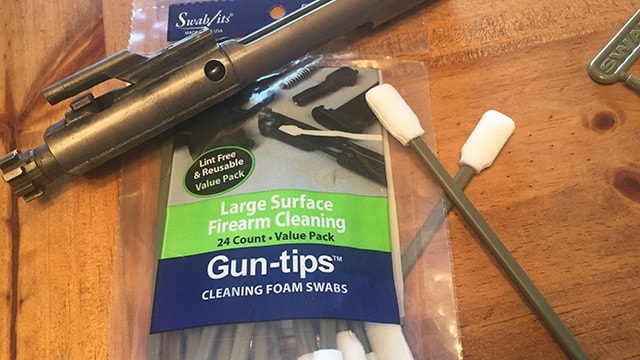 Gun-tips are the all-around cleaning tool of the product line. (Photo: Eve Flanigan/Guns.com)

Gun-tips are the flagship product of Swab-its.  Some are a flattened rectangle-shaped swab, some are an elongated swab with a pointy end; others resemble a Q-Tip. All swabs are attached to a plastic stick of about 8.0 inches. These little sponges are the all-purpose workhorses of the Swab-its line. The flat surface one does equally well at picking up debris after a solvent treatment as it does applying lube after cleaning.  They’re large enough to cover a receiver or outside of a barrel quickly, but small enough to get into nooks like the rails and slide grooves on a handgun. The smaller swabs are far more effective than a rag-on-a-jag for getting gunk out of tight places.

A bag of nine assorted Gun-tips sells for $5.00 on the Swab-its website.

Bore-tips these screw-in bore sponges make cleaning a breeze. No more threading a patch through a jag and having to reposition it to insure all interior surfaces were wiped. Being caliber-specific, these swabs give a snug, consistent fit. 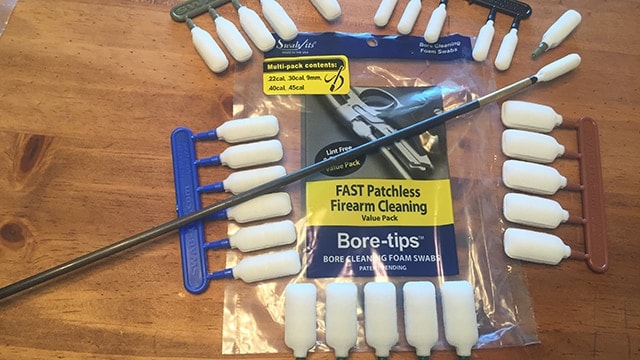 Bore-tips are available in quantities as small as 3-packs for .50 caliber or 6-packs for other calibers, starting at $4.00.  Assorted-caliber and bulk packages are available.

Bore-sticks are the newest in the Swab-its lineup, similar to Bore-tips but with the swap attached to a stick long enough to clean most handgun barrels.  The handle is textured to keep a good grip while pulling the swab through the bore. 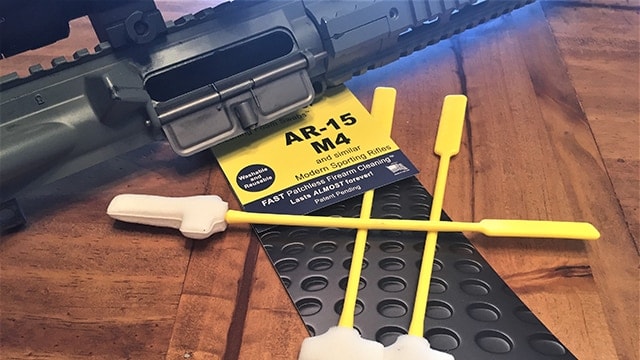 AR/M4 Star Chamber Swabs are specialized for Stoner platform chambers. The handle has a flattened end for easy rotation. This swab offers the best post-brush hand cleaning method, contacting all interior surfaces of the chamber.

These specialized swabs come in a three-pack at minimum, for $8.00.

Reusing Swab-its extends the value of the tools. Instructions say to wash them in dish soap and water, or douse them with mineral spirits.  I did the former with a star chamber brush.  While a lot of black goo washed off, the sponge remained a dark gray color after drying. 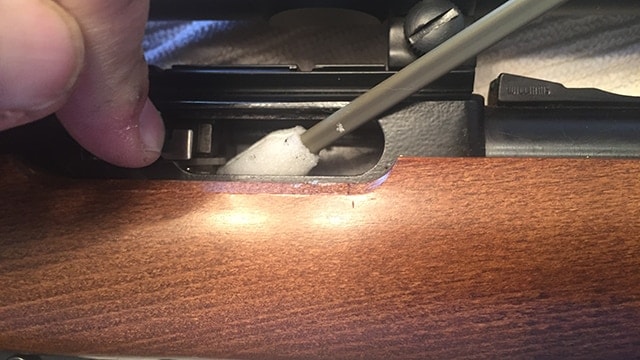 A still-clean Gun-tip, dabbed with Spartan Systems Carbon Destroyer, gets to work on the chamber of a Ruger 10/22. (Photo: Eve Flanigan/Guns.com)

Swab-its make gun cleaning more efficient as there’s no messing around with rags or patches.  The sponges do a better job than cloth of reaching tight spaces, leaving no lint, and not tearing. Health-wise, these little sponges can keep hands more removed from carcinogens and lead residue as compared to rags.  This is assuming one does the washing of the swabs with rubber gloves on. Swab-its are a great way to upgrade your gun cleaning. They make a great gift, too. Purchase direct from Swab-its or through one of the dealers listed on their website. Military personnel and first responders get a 10 percent discount.