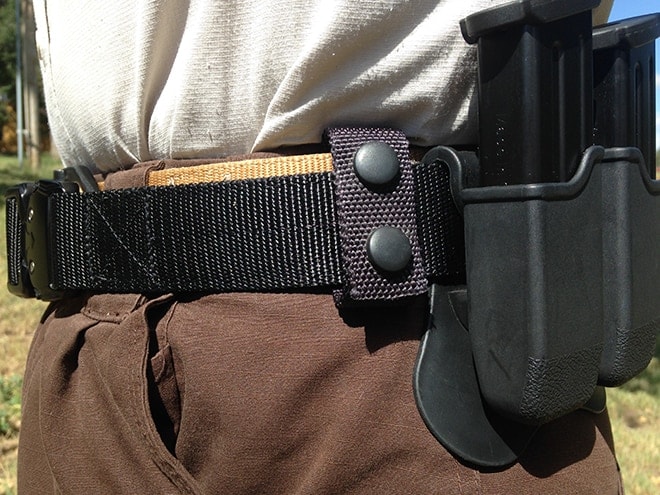 Tac Shield tactical belt. The 1.5-inch webbing is a bit narrow for standard outer belt loops, but the belt didn’t shift despite lots of time in prone. (Photo: Team HB)

TacShield offers a tactical gun belt as a worthy choice in the concealment, competition or service belt markets, for both men and women.  It’s 1.5 inches wide and reportedly made of 2,000-pound-rated nylon webbing, in case, I dunno, you consume too many tacos or need an extra tow strap for your truck.

This sturdy double-ply web belt comes in three sizes. I have a 28-inch waist and used a small, which TacShield says is 30-34 inches long. On me, it’s got plenty of room to go bigger or smaller. The fit is customizable using the hook-and-loop fabric. The hook material is threaded through a roller pin on the buckle.  No abrasive hooks are exposed while the Tac Shield belt is being worn—a thoughtful feature. 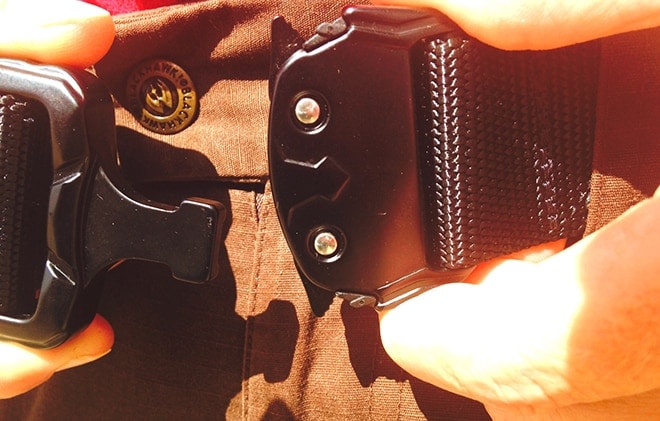 The closure is easy to operate and stays put. (Photo: Team HB)

The buckle is unusual and practical. A single point on one side inserts into a socket on the opposite side (male/female in mechanic-speak). It seats with an easy, audible “click.” Unbuckling is a simple press with thumb and forefinger against two protrusions that fit below the outer profile of the buckle.  They’re easy to operate and don’t poke the wearer in any way.  During testing, a fellow shooter noticed the belt and said he has one with a similar buckle, and praised its ease of use. 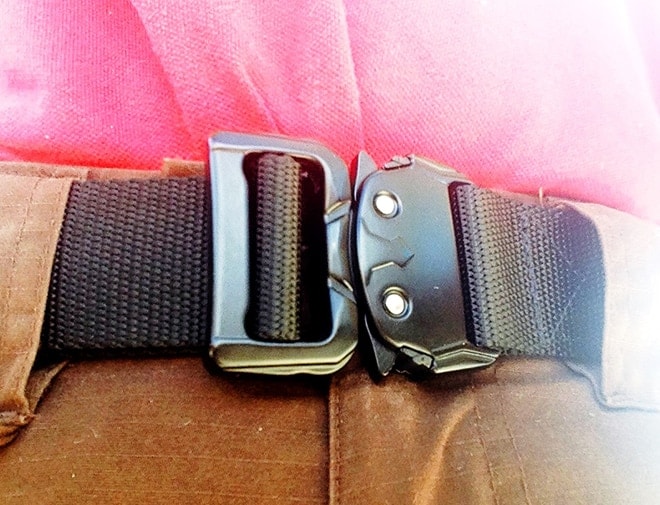 If I were an artsy-craftsy type, I’d paint the receiver side of the buckle to highlight its undeniably owl-faced molding, but I write, not paint, so I’ll just mention that here.

Testing was done in three configurations—as a primary belt, threaded through the belt loops of 5.11 pants, and over a primary, attached by snap-on belt loops.  I also threaded it through just one belt loop of jeans for a quick trip to town wearing an AIWB holster. Though barely wider than the webbing, the buckle is too wide to thread through belt loops of most pants.  That’s unfortunate as it makes donning this belt a bit time-consuming. 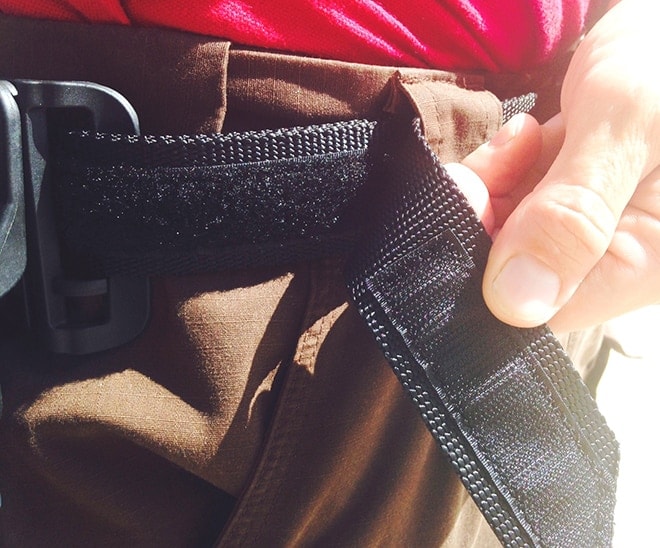 Throughout testing however, it supported three carry configurations comfortably and without any hassle once it was on: AIWB alone, paddle holster alone, and a combination of a belt-mounted kydex holster and AIWB.  The last setup was worn for two days during a rifle class that entailed lots of standing-to-prone action.  The belt never loosened and never impeded my movement. The buckle stayed secure and is surprisingly shiny and new-looking despite having been sandwiched between me and a wooden platform for two days. 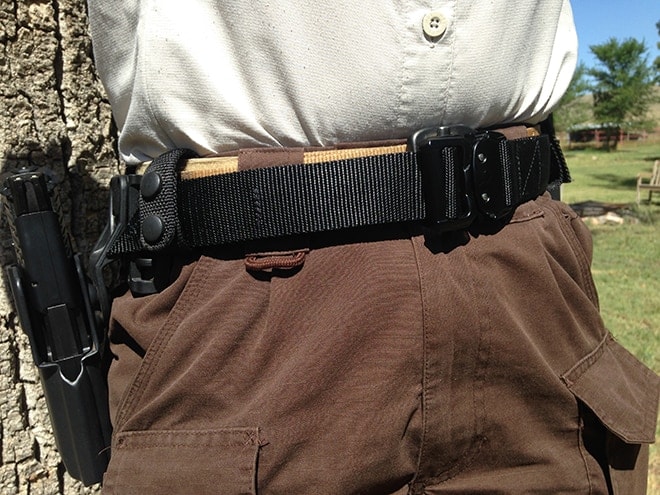 Despite being half an inch narrower, the OWB gun stayed secure throughout the trial, as did the gun in the IWB concealment test. (Photo: Team HB)

It was comfortable at all times.  A little TMI, perhaps, but here goes: secured over the primary belt, it was more secure holding onto an empty holster and full mag pouch than wearing a primary alone on bathroom breaks—a more frequent consideration for women than men, but a good safety and convenience point for anyone.  By the way, it works equally well in “womens” direction (threaded starting from the left) as “mens” (threaded starting on the right).

A low profile and almost infinitely customizable fit of the Tac Shield belt make it a nice choice for concealed carry, assuming one is prepared to take time to thread the belt through loops and then reattach the buckle. It’s ideal for use over a battle/service belt.  I sure wish the buckle fit through belt loops of tactical pants and jeans, though—if it did, it’d be my hands-down favorite.  And it’d be nice if it came in more color choices than just black.  (NO, dear manufacturer, this female isn’t asking for pink, just other options in the usual tactical palette).

At $59 and as an American-made product, the Tac Shield tactical belt is a decent value.  If the buckle would fit through the belt loops of standard pants, and if the color choices were broader, I’d consider it an excellent investment for any pistol shooter.