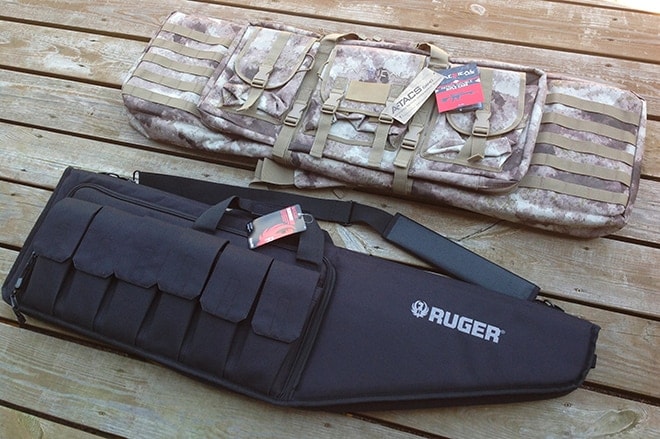 The Allen Company flies under the radar making all things shooting-related and quietly announcing dozens of new products each year.  Most likely, you have more than a few Allen products in your shooting room, including gun cases.  So what’s new that you need to know about?  Guns.com checks out two of Allen’s new-for-2016 gun cases: Ruger-licensed and Tactical. 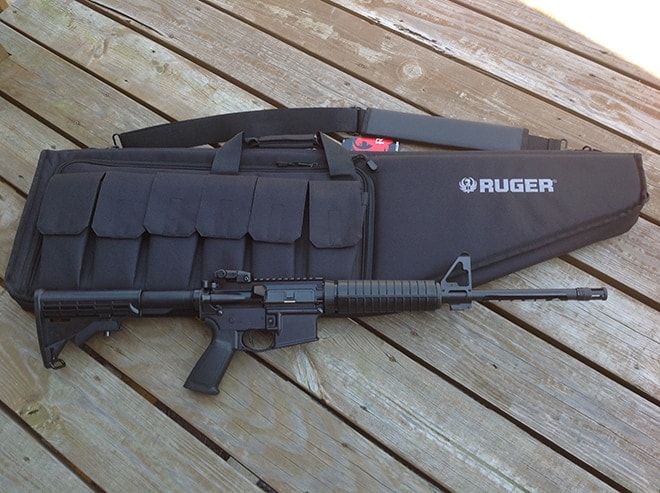 Allen is now the maker of Ruger-branded cases, backpacks, pouches, and other sundries.  If your Ruger rifle is in need of accessorizing, a good place to start is the Ruger Raid Side-Entry rifle case.

The Raid is black-on-black coloring with a muted silver Ruger logo.  It’s available in either 38” or 42” length options, with both retailing for $59.99 but selling closer to $40.  This is a single rifle case with dual weapon hook-and-loop securing straps, and as named, is accessed from the side entry panel.  Though the entry point initially looks small, it actually opens quite wide and makes storing and retrieving the weapon simple and safe. 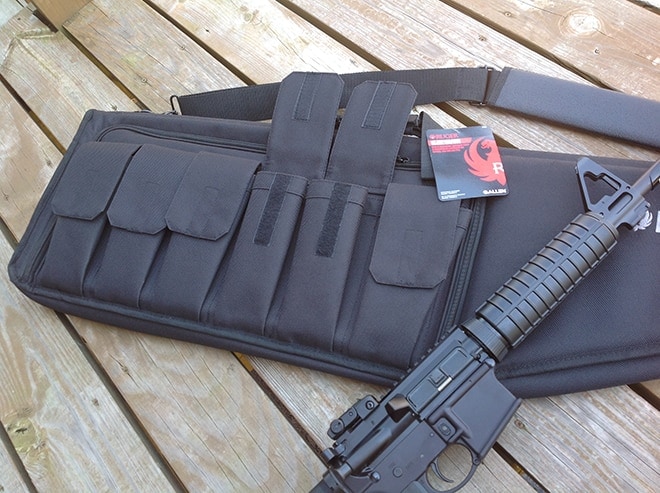 On the outside front are six mag pouches, which are plenty wide and deep and can store other goods as well.  We stashed several pairs of shooting glasses and a few boxes of ammo in addition to 30-round magazines.

Though it’s a lightweight soft case, the Raid Tactical is very well padded and holds its shape easily even when not housing anything.  Made of what the company calls Endura, the fabric feels rugged and there’s little doubt it will hold up to hard use.  The padded shoulder strap is removable, and though this is certainly not a security-driven case, it does have lockable interlacing zippers. 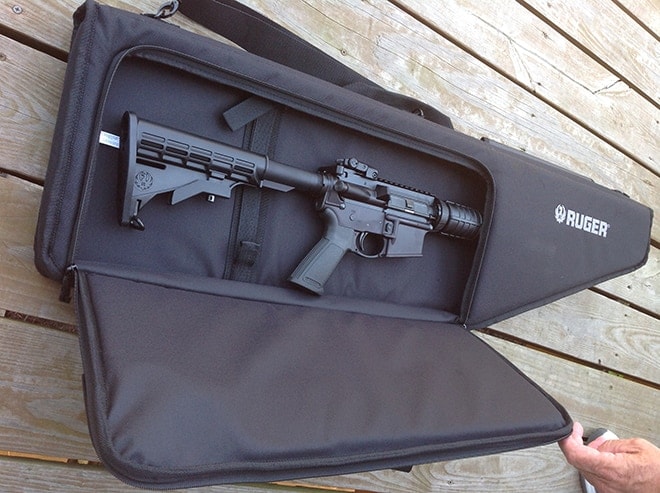 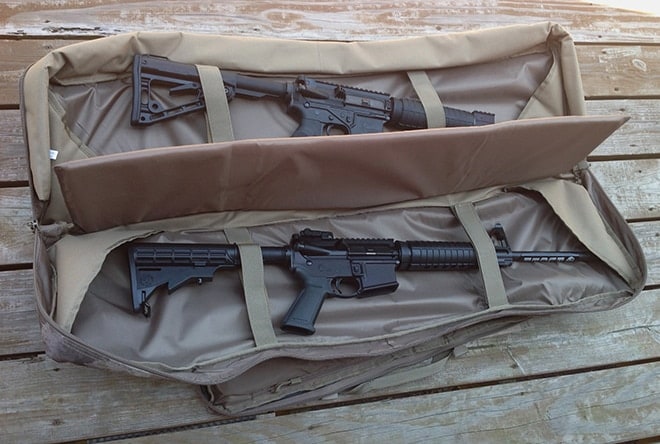 Looking for a lifetime case that carries two rifles and as much gear as your back can bear?  Check out Allen’s Tactical Patrol Double Rifle case with backpack straps.

Though this is also a soft case, it’s very heavily padded and has an interior divider separating the two rifle areas.  Like the Ruger Raid, the Patrol Double Rifle model is also available in the same two lengths, is built of the same Endura material, and has lockable zippers.  In addition to three large latching gear pouches on the front, these are backed by a full zipper compartment which in itself has multiple zippered and velcroed sections.  On the exterior, there’s plenty of MOLLE webbing and multiple D-rings for additional gear attachment. 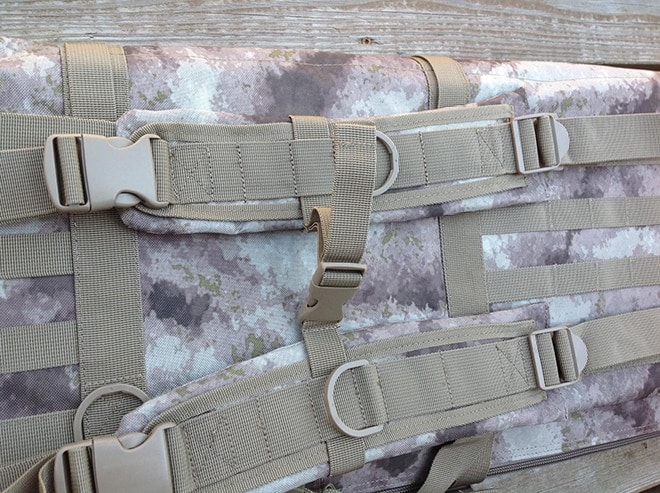 This case is a beast and weighs as much as a rifle when empty, but the well-padded backpack straps balance the weight evenly, and, should you prefer, an optional shoulder strap is included with the product.  We loaded up with two AR-rifles, four full mags, a couple boxes of ammo, a change of clothes, shooting gloves, eye and ear protection, and couple bottles of water.  Though certainly weighty, integral compression straps keep the load secure and balanced, and the whole thing rides surprisingly well as a backpack. 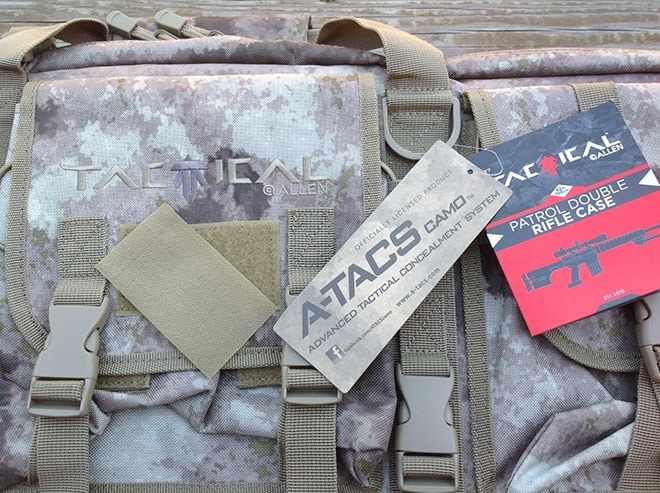 Though available in both black and camo, our test case came in the desirable ATACS-AU camo pattern.  For those not familiar, that stands for Advanced Tactical Concealment System and is one of the fastest growing patterns recognized for its muted, blending pattern.

With a stiff retail price of $114.99, we found the camo double case from $80 at online retailers.  Though it’s marketed as a Tactical case, we think it would make a sweet bug-out bag for guns, accessories, and other necessities. 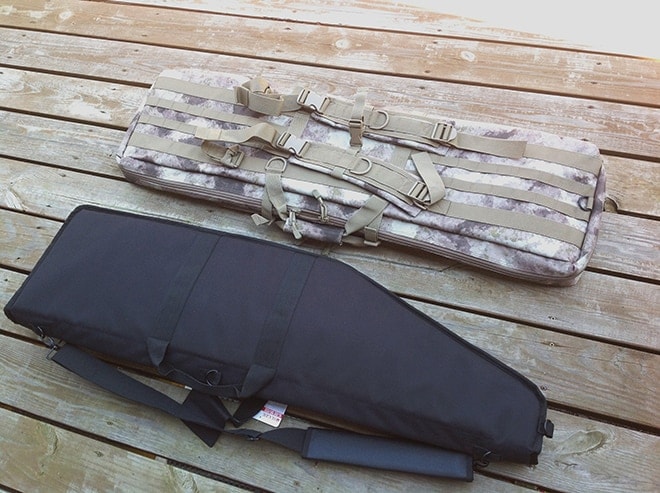 Though both of these tactical cases are on the higher end of both features and price, Allen also offers plenty of other cases for hunting, handguns, and gear.  And Allen does way more than just cases.  Need gloves? Backpacks, targets, slings, vests, or even archery gear?  One thing that’s certain, if you have a shooting need, Allen has you covered with gear designed by and for outdoorspeople.