I’m going to begin and end this review with the same admonition.  Tannerite, when used appropriately, is a blast.  And safe.  Yet I can hear that little voice in the back of my head, the one who wants to say,”Hey Bubba, watch this!”  If you are going to shoot Tannerite, do it safely.

Tannerite is a binary exploding shot indicator made from a proprietary mix of ammonium nitrate and aluminum powder.  The two components are shipped together, but in separate containers.  When mixed, they have the potential to explode, but only when struck by a fast moving bullet.  Pistols and shotguns and lethargic rifle rounds won’t produce the pressure needed to work the magic. 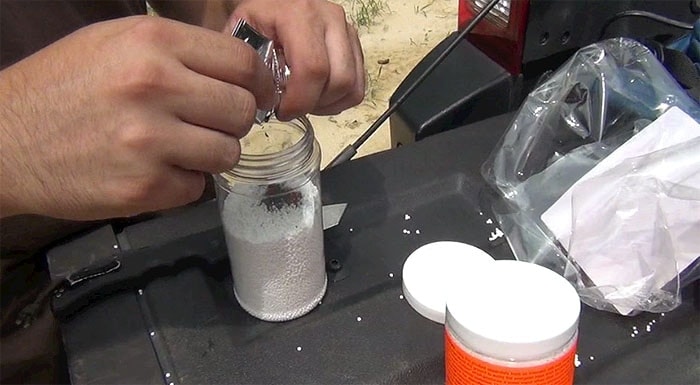 They are currently sold in half-pound and 1-pound containers.  Twenty pounds, directly from Tannerite, runs $170.  That’s $8.50 a pound.  When split into half pound containers, that’s $4.25 a shot.  Good clean fun, and cheap, too.

When used as directed, Tannerite won’t set anything on fire.  And with a well chosen target, it won’t produce lethal shrapnel.

The legal eagles at Tannerite have been working overtime lately.  They’ve just successfully defended their patent in a big way.  The Tannerite name can no longer be used as a generic product type, but is a distinctive and protected brand name.

Brand identity aside, Tannerite is also concerned with the misuse of its product.  It explodes.  That’s what it is designed to do.  That said, it is not meant to blow things up.  And it is meant to be used from a safe distance.  Misuse of Tannerite attracts unwanted attention from the ATF, who get their hackles raised if the product is used to make explosive devices.

This was my first experience with Tannerite.  While I was tempted to find something gratuitous to annihilate, we settled on watermelons.  They’re a great approximation of pigs.  The tub of Tannerite is a bit larger than a pig’s heart.  If the watermelon pops, it is a good indication that your shot was accurately placed. 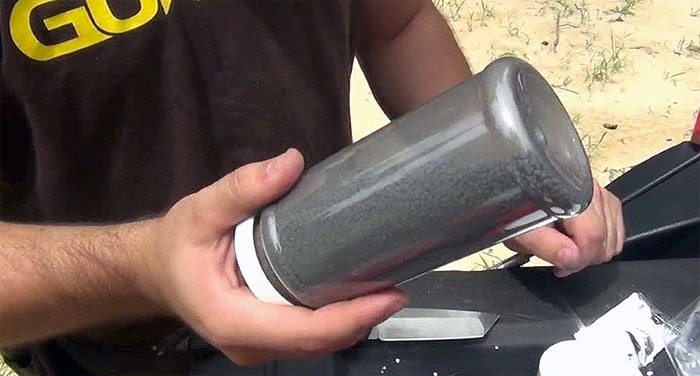 Half a pound of mixed up Tannerite.

With a Colt Accurized Rifle topped with a Leupold Mark 4 LR/T, there was very little challenge.  At 100 yards, there is an audible delay between the visual explosion and the bang, which sounds like the word bijou said very fast.

We had cameras set up at 50 feet, and 100 yards.  The closer camera picked up quite a bit of pulpy shrapnel.  The watermelon disappeared in a vapor cloud.  It is most pleasing.

Four half pound containers come with one mixing jar.

We also tested it in a 5-pound bag of flour.  The watermelons, sounded better than they looked, and they were less than dramatic from where we were shooting.  Flour, on the other hand, sent up a nice cloud.  It showed much more of the explosive force generated by the Tannerite.  A bowling pin that I’d set next to the bag of flour was knocked into the side of a target holder beside it. My guess is that it would have flown 30 feet or more.

Which brings me to my final admonition.  This is fun stuff.  And people abuse it.  But shrapnel kills.  Tannerite sent us 2 pounds to try out.  We separated that into four shots.  It wasn’t as dramatic as many of the videos you can find on YouTube.  But I had more fun on this shoot than I’ve had on any other day at the range.  And it won’t be the last time we indicate our shots, for sure.  But keep your nose clean.  And on your face.  Indicate your shots safely.