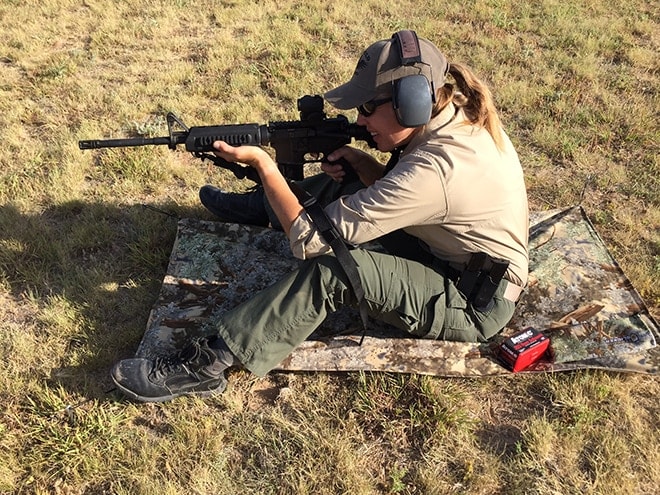 The author shoots from a sitting position on an Alpine Innovations Terrain slicker. (Photo: Team HB)

(Editor’s Note: The price of Alpine Innovations Terrain slicker is $34.99, not $49.99 as published originally)

The Terrain Slicker by Alpine Innovations is a multi-purpose terrain guard and weather shield with integral stakes and clips. It’s the latest in a series of “slicker” products by the same company. Ever in search of the perfect shooting mat, I was eager to give it a try.

The Terrain Slicker arrived encased in two packages.  A commercial paperboard wrap/hanger was on the outside.  Its color photos and features list are useful for showing suggested uses and care.  Inside that, a camo fabric sleeve with a drawstring closure held the Slicker. Off came the sleeve, easily enough, and we were ready to test. 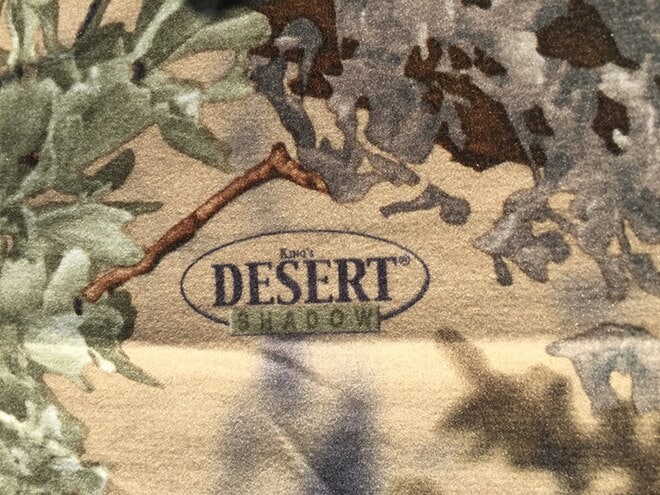 I’m not sure what fabric(s) the slicker is made of, so I’ll give my best description here.  The outward-facing side has a soft, peachy texture, which to my pleasant surprise, didn’t pick up any of the hundreds of burrs or small prickly seeds in the rough where we first tested it.

The camo pattern has roughly sketched medium-sized oak leaves and limbs. A printed logo/pattern name, “desert shadow,” is emblazoned at regular intervals. For the trees featured, “north Texas” might be a more fitting pattern name, but that’s really inconsequential.

It’s the underside that concerns me more.  Getting a photographic depiction of it was difficult, but there’s a clear weave pattern on the back, and it is unfortunately white.  That pretty much negates the slicker’s candidacy as a hunting blind, except perhaps in an environment with light snow. 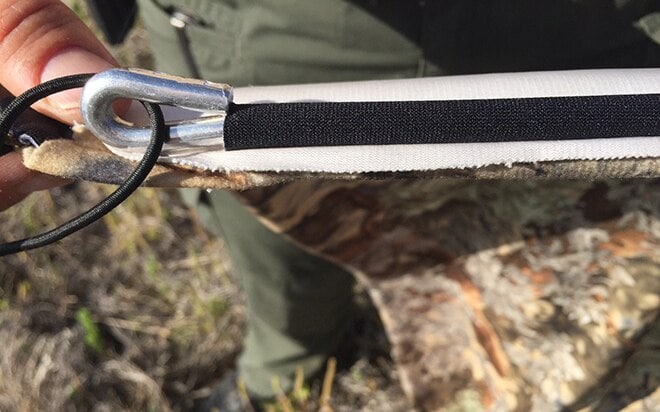 The really brilliant part of the design is in the way the ground stakes are attached and secured for storage.  A tiny sleeve on each corner of the slicker’s underside conceals a small metal stake.  The stakes are attached to the mat on a loop of black elasticized cord.  The cords’ flexibility means the stakes can help secure the slicker to the ground in uneven terrain, or when the slicker is being used to cover oddly shaped objects.  They can also double as hangers for securing the slicker to an above-ground object.

Unlike most outdoor gadgets with stakes, the Terrain Slicker’s fold neatly and invisibly back into the product for storage.  No more dropping or losing stakes. 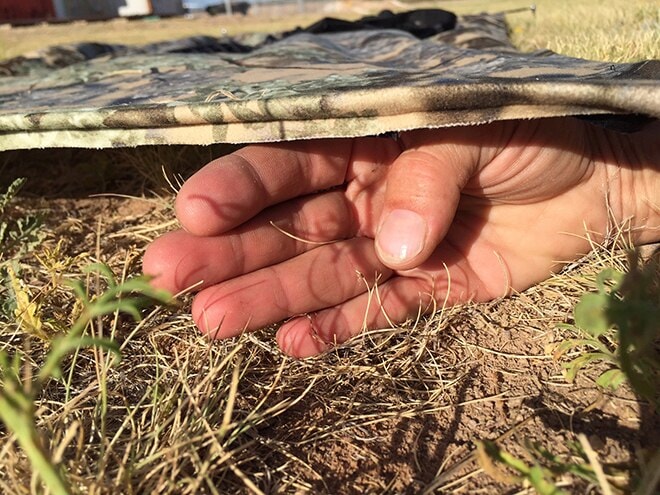 With stakes in place the slicker rifes 4″ off ground without weight on it. (Photo: Team HB)

A hammer was needed to sink the stakes into sun-baked ground.  Like the white fabric backing, the shiny metal of the stakes is counter-productive for hunting or other applications where one wants to remain unseen.  A coating with something darker and non-shiny would be more useful.  This is a problem easily fixed with a can of spray paint, but I don’t feel it’s too much to ask considering the appeal to outdoors people.

Two of the corners feature small, sturdy plastic hooks.  It’s not clear why they’re only on two corners.  We used one to secure one corner of the slicker to a large bush when setting it up as a blind or rain fly, and it worked fine. 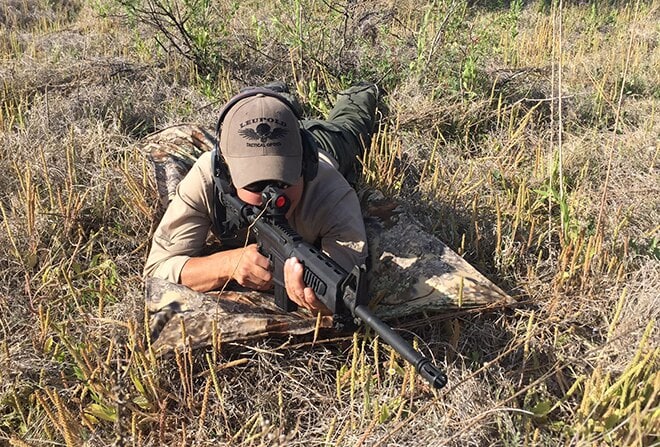 Spreading the Terrain Slicker on the ground for use as a shooting mat, I was disappointed it wasn’t bigger.  With the corners pulled taut, the slicker suspends itself a good four inches above the ground, like an idling magic carpet.

I was glad to see the stakes stay put and the ends not curl up to expose the white side of the fabric when I assumed shooting positions on the slicker.  It stayed put as I scooted my AR and myself around to acquire a view of the target around the weeds.

On the downside, the 56 x 36-inch slicker is simply too small to be of good use as a shooting mat.  In prone with elbows on the front of the mat and a bit of real estate on which to lay my AR, my lower shins and feet were on bare ground.  For shooters who like to make a “nest” of mags, ammo, and whatnot around them for extended practice, there’s not much room side to side either. 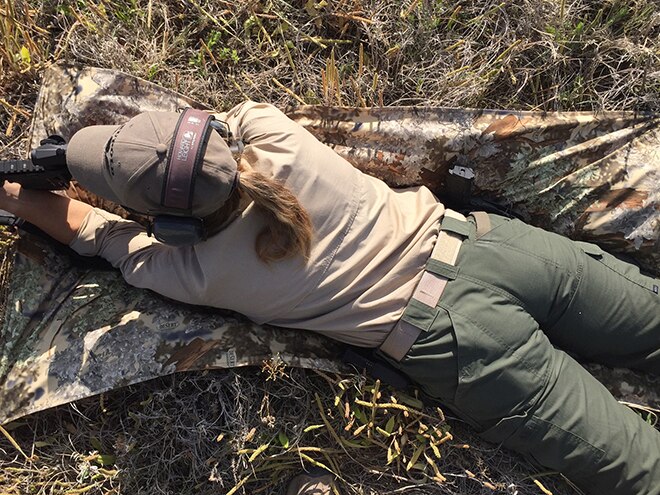 Although advertised as a shooting mat among other things, the slicker offers zero padding.  Every thorn and small stone is felt when lying or sitting on it.

Likewise as a blind or rain fly, the slicker offers little shelter for an object the size of a human.  Even set vertically as shown in our picture, it would be an experiment in making oneself compact to get completely behind or under it… and that’s from my five foot, five inches of perspective.

The slicker is compact and light and much more attractive than a tarp.  It’s so light that there could be a lot more of it, and I’d still be willing to pack it on trips when rain or the need for human-made shade is likely.

With the Terrain Slicker being the size it is, the main purpose I see for it, perhaps odd but a very real one for me, is an “over-mat” for my padded shooting mat, which didn’t come with hooks.  Here in the southwest, the near-daily wind readily picks up shooting mats, even if the corners are weighted by rocks.  I feel the Terrain Slicker will keep my mat where it belongs and prevent me from having to navigate around the objects I usually use to hold it down. 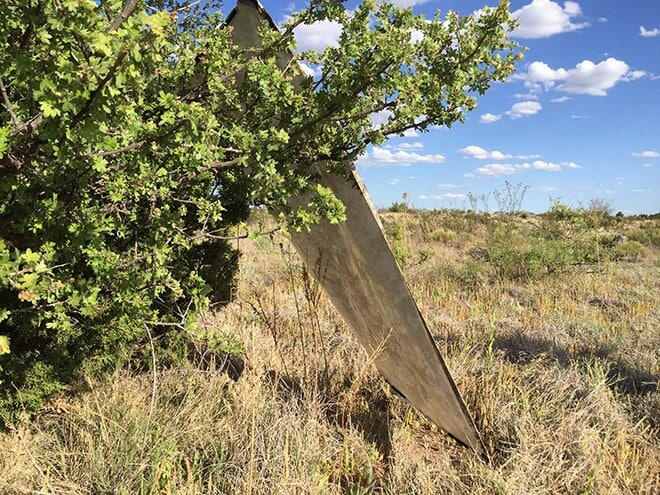 Not big enough to be superb as a rain fly or blind but maybe enough. (Photo: Team HB)

On camping or hunting trips, the slicker would be great for protecting belongings from precipitation.  It’s also a handy mini-blanket for use in a pinch, including covering a person or animal in or at risk of shock, though it’ll only cover part of an adult.

The Terrain Slicker got pulled out of the truck and employed as a shade device just a day after the formal review process.  An elderly student seemed about to melt in the late afternoon sun, and the range shade structure was useless at that moment, casting a shadow far from our gathering place.  The elastic cord/stake combos proved very useful.  Wrapped around vertical posts, the mat cast a small, but useful shadow on the lawn chair where the student sat and regained her strength.

Note that Alpine Innovations describes the slicker as “weather resistant,” not waterproof.  I didn’t go so far as to soak it during the trial, but it appears that it would shed water so long as it’s set on a slant where it won’t allow rain to pool.

The product instructions recommend a hand or machine washing with light detergent; hang to dry.

All 11.5 ounces of the slicker fold easily, with stakes tucked into their sleeves, and can be stuffed into the carry sleeve, in under two minutes.  Unlike too many other things that are nearly impossible to re-pack once used, it folded up just as neatly as it’d come out of the sleeve. It would be handier if the sleeve were somehow attached to the slicker, like the stadium cushions that unfold into picnic blankets, to keep from losing it. 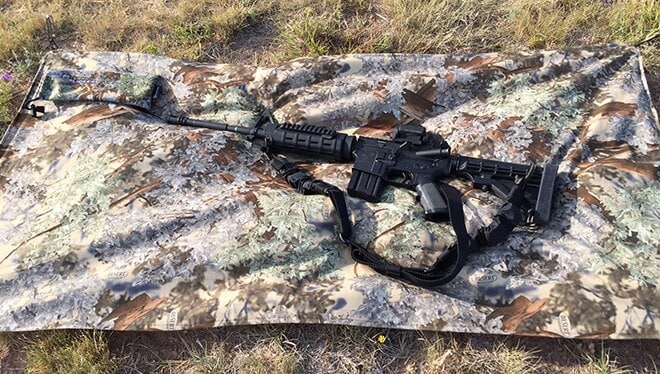 MSRP on the Terrain Slicker is $34.99.  Although actual prices are probably lower, even at, say, $30, I’d want a large-enough-for-prone slicker with a subtly colored underside and stakes.  Those changes would make it worth buying at market price.

The Terrain Slicker incorporates some very useful, innovative ideas—like stakes on elastic cords—into one product.  Other than as a hold-down device for my usual shooting mat, though, I see it as too small to be one of those indispensable tools for outdoor activities.  Testing this product, the punchline of an old joke kept coming to mind: it’s a good start.