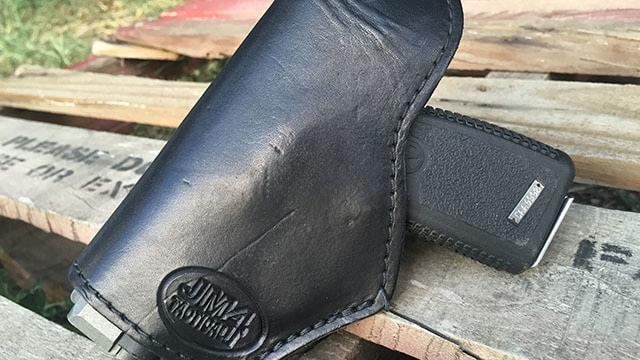 Last December, I reviewed the unique, magnetic Quick Click and Carry holster from Abilene’s JM4 Tactical. Its ease of installation on a waistband and retention of the gun without interfering straps or clips was impressive. But, as has happened with other holsters, the muzzle kept rubbing my thigh when seated, an unpleasant and soon painful sensation.
It seems I wasn’t the only one with that feedback. In response to customer feedback, the line has been re-designed to include a high-ride version of the Quick Click & Carry. The new model is still an American-made leather holster that secures to pants with magnets—one in the holster body, and one on a flap that folds over the waistband. For this review, I wore the holster for some or all the day for three weeks. Spoiler alert: I’m still wearing it.
Safety is critical, so I’ll go there first. Both the original and High Ride are a safe design. Both protect the trigger guard in an impenetrable manner, and both retain my pistol securely during physical activity. Those activities haven’t included trail running as they did in the last review; that’s a form of exercise my knees no longer support. However, I’ve hiked, ridden my horse, and done all manner of range-related grunt work in hot weather wearing this holster. 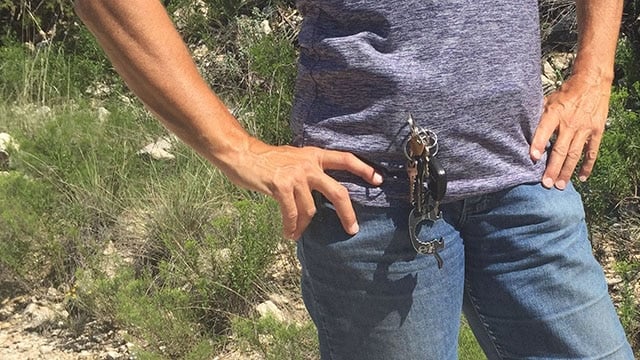 The holster rides higher and gets its retention from powerful magnets. (Photo: Team HB)

What’s different about the new design is that the gun rides a bit higher on the waist, thanks to changes in the placement of the magnets and a leather flap that, for my small .380, completely protects the slide from sweat. It solved the problem of being poked in the thigh by the muzzle, at least for me. As with the original, the High Ride can also be worn outside the waistband, but it functions best inside. It can be worn for cross-draw or strong-side draw, and can go anywhere on the waist, I’ve worn it appendix IWB. Depending on the clothes I have on, it fits somewhere between the 12- and two-o’clock positions.

The only time the gun and holster threatened to wobble out was when I was wearing mid-rise jeans that are on the loose side, sans belt. Though the gun wouldn’t have tumbled out unholstered, I did discover the limits of what pants will support it. Likewise, elastic waistbands or (I would imagine since I don’t wear) tights have to be pretty snug for this holster to stay in place. Unlike most IWB models, the High Ride at least gives me the option of going belt-free with certain pants. The extended flap between gun and body also solved a problem I’ve had all summer in relation to a synthetic IWB holster, contact dermatitis. Glad that’s over!
While I have high regard for this unusual holster, it does have a couple drawbacks. “There is less retention with this design,” said Chad Myers, designer of the High Ride and co-owner of JM4 Tactical. “You won’t be able to keep a fully loaded Glock 19 in it completely securely, but a smaller gun is no problem.” 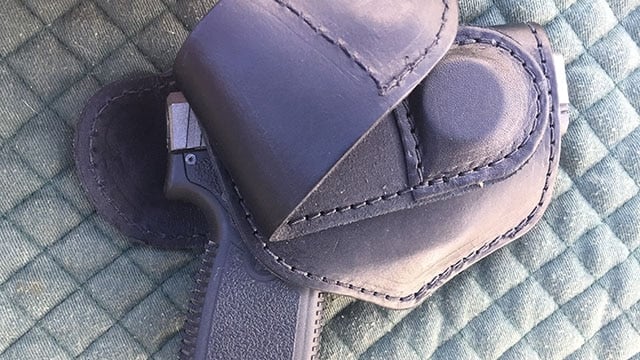 The holster utilizes a belt flap with its magnets. (Photo: Team HB)

Thinking the rig would be most discreet in black, I ordered that color. The magnetic flap does stick out under some shirts, especially if I reach upward. But it looks more like a phone accessory than anything, so it’s not a concern. What has been troublesome is the bleeding of black dye onto medium- and light-colored pants, as well as my skin. That’s most pronounced on days when I’m working outdoors and sweating a lot, the color transfer has been less severe in more recent days. If I were to choose another holster from JM4 Tactical, I’d go with the natural leather color for this reason. The dye has thankfully washed out of clothing and off my skin, and JM4 does warn customers of this likelihood.

Wearing the holster with belted pants, I’ve had good results with concealability. As mentioned earlier, it can be wobbly, including pressing outward from the body, when not worn with a belt. With good-fitting pants and a loose shirt, it wouldn’t matter, but with the snug, solid-color tees and polos that are my staple, total confidence with the High Ride means using a belt.
Drawing from the holster requires that the gun, or at least the one in this test, a Kahr CT 380, be eased up about 3/4 of an inch to obtain a good firing grip. Retention is sufficient enough that I’ve experimented with just holstering the gun a bit less seated in the holster. This allows for an immediate firing grip, but the gun’s actual grip then protrudes when I sit down. I find the slight inconvenience of having to raise the gun slightly a small one in comparison to the ease and confidence the High Ride otherwise lends. As experienced carriers know, there is no concealment system without at least one compromise. I can live with this one. 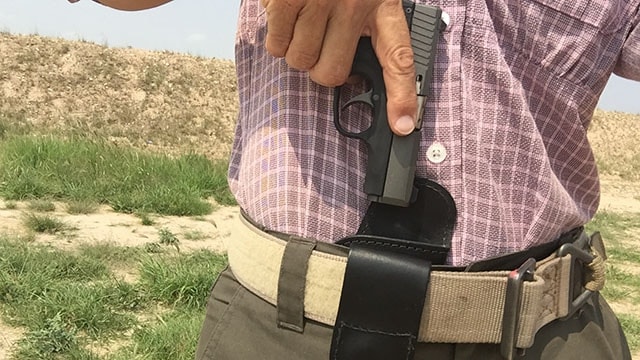 The body-side flap, which protects my skin from the slide, is a tad too long for the Kahr. The pressure of my gut pressing on it while sitting down has molded the flap over the back of the slide as the leather has broken in. It’s so much so that, under a snug shirt, I have to be attentive how I sit or the flap itself slightly “tents” the fabric. Though it adds to the comfort of wear, it’s also a bit inconvenient. 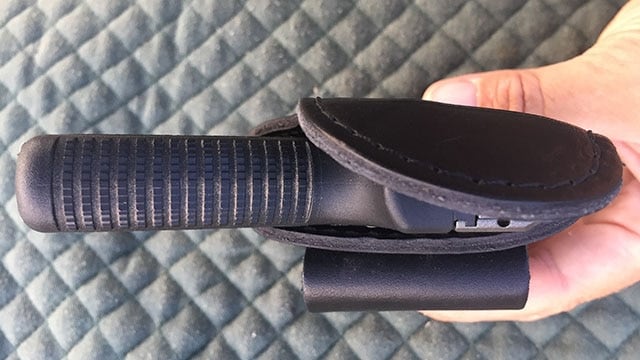 Reholstering got a little more complicated as that flap broke in. It covers most of the holster opening, making it not a clear path back to the holster. Holding it in place with my left hand as the right one reholsters might seem the simplest choice, but one that violates the muzzle-in-a-safe-direction rule as the gun passes over my fingers. I’ve found that I can press the side of the frame against the flap while moving the gun into the holster at the same time. In other words, I’m using the side of the gun as a tool, and avoiding “fishing” my way into the hole with the muzzle pointing into my torso. Taken deliberately as any reholstering action should be, I feel this is a safe method for re-seating the gun after use.

JM4 Tactical has done an outstanding job of responding to customer feedback and evolving its products in less than a year. A shirt tuck version of the Quick Click & Carry is available, as are models that accommodate popular laser and light attachments. Pricing of the High Ride starts at $79.95. It comes in tan, brown, and black, right- or left-hand oriented, and with a choice of leather types. Orders are direct; current shipping times are 10-14 days. This family business seems to be booming, as any that is meeting the need for safe, user-friendly holster design deserves to be.