Gear Review: The Trijicon RMR. The Fastest Optic Ever

The Trijicon RMR is one of the easiest optics I’ve ever used.  And far and away the fastest.   Trijicon’s Ruggedized Miniature Reflex sight is simply the lightest, most versatile red dot available.

The RMR’s strange shape is designed to absorb the impact of recoil, and move that stress away from the glass.  But it also adds a very low profile to the optic, which makes it possible to have a cheek-weld on a rifle, and still see what happening in your peripheral vision.  Looking up from the sight and back down doesn’t require head movement, just eye movement. 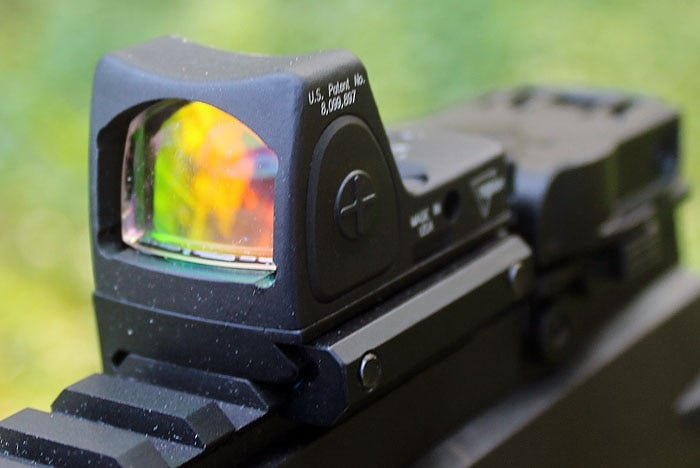 The Dual Illuminated RMR has a tritium-phosphor lamp that illuminates the reticle in low light conditions.  Fiber optics automatically adjust the brightness level and contrast.

The LED RMR automatically adjusts its illuminated reticle to light conditions.  It runs on a CR2032 battery which lasts through two years of typical use, or five years in a safe.

The Adjustable LED RMR has an automatic brightness mode and controls for eight settings including 2NV and Super Bright.  The battery will last for four years of typical use on setting four. The slim housing on each of these is made from 7075-T6 aluminum and they’re made to mil-spec standards.  Each RMR  has a flat bottom which is tapped to accept any number of mounts. Trijicon offers a wide variety of options that will let you put this thing on just about any gun or optic.  Simply screw the sight to the mount.  Rifles, shotguns, pistols.  On top of ACOGs.  The RMR can go just about anywhere. The lens has a coating on it that reflects light in vibrant shades of red and orange, but keeps the target field of view completely clear.  The dot is the only noticeable difference.  Even the aluminum housing tends to disappear, as you focus father down range. 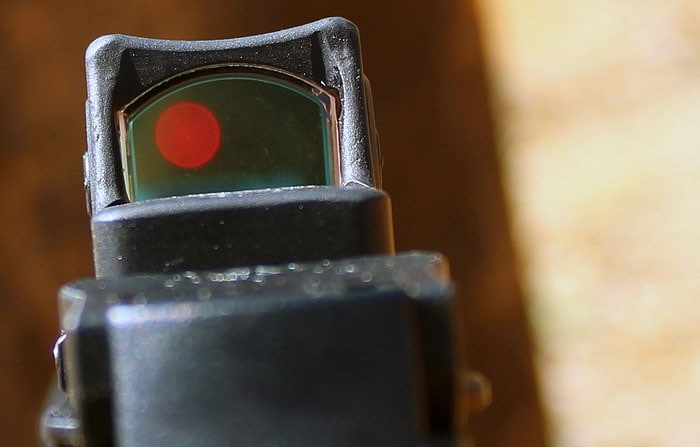 This is where this sight really stands out.  We mounted the Bertta ARX 160 .22 in a CTK Gun Vice and filled up a magazine with CCI Minimags.  We had few adjustments to make, and were putting bullets in the same hole after five shots (from the vice). 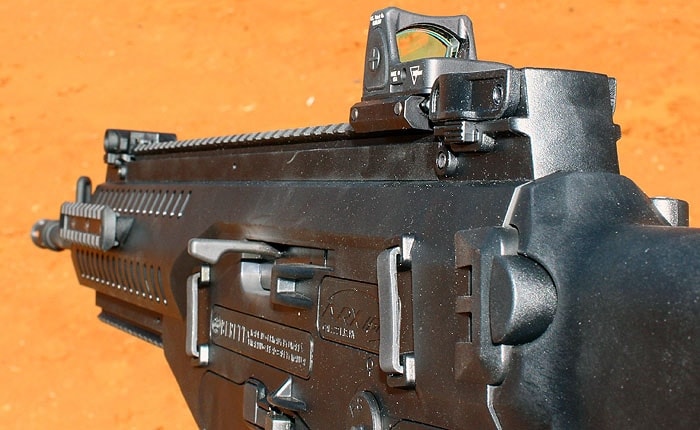 From there, the RMR works like iron sights.  Because there is no magnification, you compensate for elevation at long distances.  But that is the only time you will miss.  Even when we’d blown through the CCI and started mixing in leftover .22 with varying grain weights, shapes, and charges, there were very few misses.

This is where the term reflex comes from.  Shooting with the RMR is reflexive.  You build that muscle memory of shouldering a gun, moving your finger off the guard and to the trigger, and lining up the iron sights.  But then, at the end, you see a floating red spec.  Even before you are really ready to shoot (as those three options happen in one motion, usually) you can see the bullet’s point of impact.

This adds a fourth step to the three step sequence, and that is target acquisition.  Aiming, with traditional irn sights, usually stands alone as a fourth and final step.  But with the RMR, it happens reflexively.  And much faster.

We shot on distant targets, close targets, moving targets….  There was no situation for which the RMR was not ideally suited.  When combined with the innate capabilities of a rifle like the Beretta ARX 160, the RMR makes missing almost impossible.

But we took it one step further and put on a Silencerco Sparrow.  That felt almost surreal.  With Remington subsonic .22, the gun thwacked.  No bang.  No need to wear ears.  No real need to concentrate on aiming.  It was all too simple.

Pricing on these sights vary.  Retailers will, at times, have coupons available, or sales, that drop the price down to the low to mid $400 mark.  Prices vary significantly by the optional mounts included with it.  But don’t be put off by the price tag.  The RMR is the best.  And you pay for the best.  Even if you end up paying more for the RMR than you do the gun, it will never let you down.