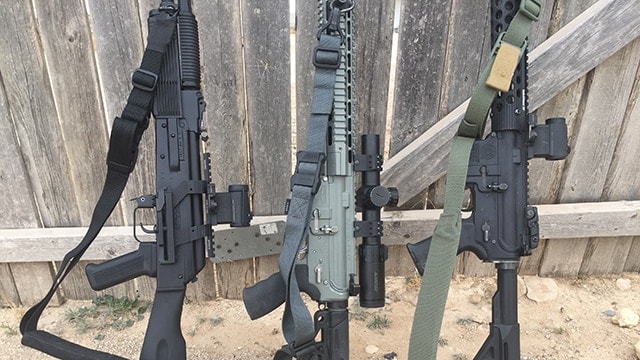 Aside from a quality optic, few accessories increase the ease of using a rifle more than a good sling. A sling can free up hands, support a shooting position, or simply distribute the load. Modern tactical slings, when well-chosen and fitted to the user and firearm, can do all those jobs, with surprisingly little hassle. Here, we take a look at three quick-adjust slings, all of which are on rotation in our carbine training stable. 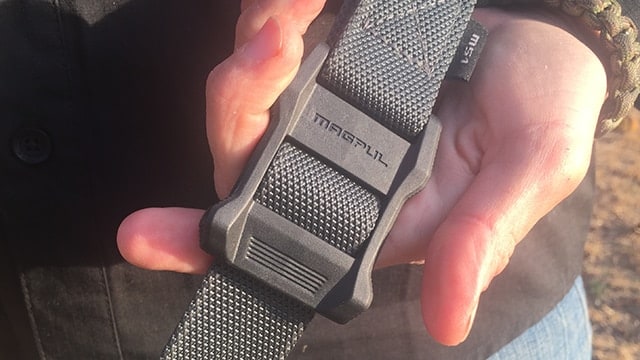 Magpul MS3 Gen 2
Magpul’s Gen 2 evolution of this sling is a testament to listening to customers and the many boots-on-the-ground personnel who provide consultation to the company. Construction is 1.5-inch nylon webbing, which is remarkably soft out of the box. My copy has pilled slightly where it’s rubbed hook material, but that’s a minor concern in view of how enjoyable and practical this sling is to use.

End clips—patented as Symmetrical Paraclip shackles–are steel, treated with a process I’ll not venture into, that both hardens and imparts a matte finish. The jaws open with a squeeze and can be locked into place for extra security. These precisely formed clamps don’t have a lot of wiggle room, and thus connection points can be stiff unless the shackles are connected to a 9/16-inch loop. With no loop attachment up front, I opted for another Magpul component, the RSA rail sling attachment, for times when a Picatinny rail is available up front. This lightweight component has remained solid after days of rough use. The jaws rotate nicely around it. 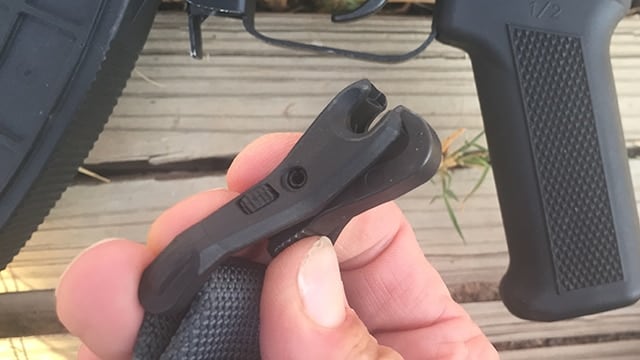 Magpul’s clip. Lockable and easy, but only capable of hooking onto small-diameter loops. (Photo: Eve Flanigan)

There are two ways this sling offers quick adjustment. The yoke-like polymer insert, in line with the webbing near the rear clip, serves as an attachment place for one-point conversion. Simply release the front hook and attach it to the yoke.   A sliding polymer plate, a bit smaller than a playing card, allows the user to extend or take up slack in one smooth stroke when wearing the sling in two-point mode. Adjustments so far have been without a hitch.

Magpul advertises having put extra webbing on this sling, for larger and armor-clad operators. Being on the west side of the normal curve for adult human sizes, I often find slings’ assumed proportions to be so different from my own that it’s troublesome to use the gear as designed. Most often, that’s because the webbing on the fixed places is too long. But that wasn’t the case here. You want tactical? The webbing itself has reduced IR reflection. While Magpul isn’t offering full-body cloaks made of the same material yet, they really did pack the features in. 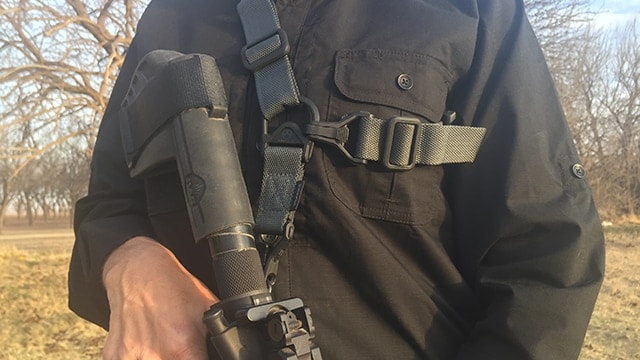 It was a student, about my size, who showed up for carbine class with his own brand new MS3 Gen 2 who inspired my purchase. Seeing him easily adjust the webbing without having the cut and burn it, and furthermore, seeing the ease with which he became handy with the sliding adjustment was promising. I’ve not been disappointed since buying this one. The Magpul MS3 Gen 2 weighs 6.0 ounces and is sold in black, ranger green, grey, and coyote. Retail price is $49.95. 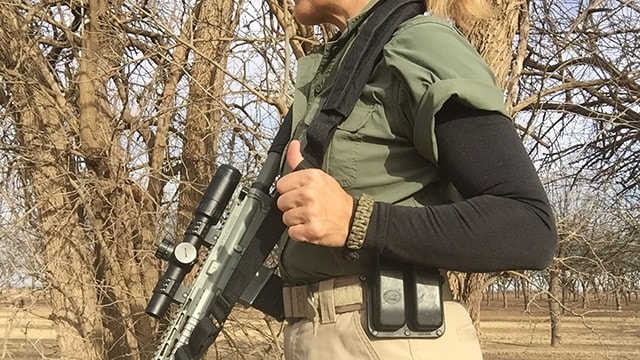 Raising the rifle and lengthening the sling at the same time is easy with T3 Gear’s 2-point sling. Shirt and pants sponsored by Propper. (Photo: Eve Flanigan)

T3 Tactical Gear 2-point adjustable sling
From another company with abiding veteran influence comes this tough-as-nails two-point sling. T3 Tactical Gear’s sling has industrial-grade stitching on its thick, 1.25-inch wide webbing. Stiff connections aren’t a hassle with the clips on this sling. The lightweight steel clips are a world apart from Magpul’s, with a generous loop. Opening these innovative clips requires a firm thumb and forefinger squeeze on traction-assisted tabs. The two sides of the clip open not unlike a car key ring. The double, two-direction closure on a sling loop makes a very secure connection. 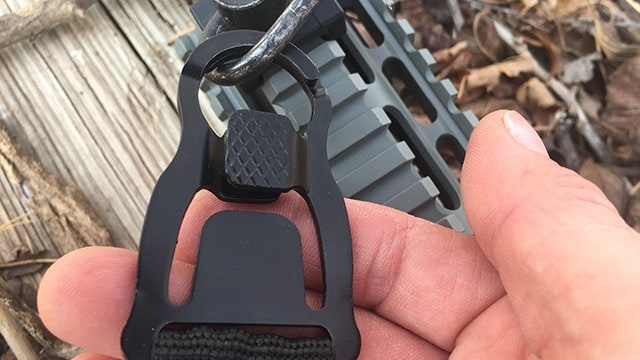 The incredibly tough clip of the T3 Gear sling, with elastic silencer pulled back for visibility. (Photo: Eve Flanigan)

The clips don’t rattle, as T3 wraps them in elastic sleeves. They muzzle not only sound but also glare—though the new buckles are painted black, wear and tear will inevitably result in shiny spots. The silencers are easily pushed out of the way to use the snaps. An in-line loop, easy to slip four fingers into, serves as the length adjustment point. Both shortening and lengthening the sling are quick and easy, for the most part. Around the neck area is a padded sleeve with suede-like finish, it secures with Velcro. On my short frame, I sometimes hit the pad before the sling is at my preferred length for prone. For long walks and jogs with the rifle, though, it’s a wonderful asset missing from the others in this article. So long as I’m in a setting where I know I’ll travel by foot before settling in to shoot, this sling is my preference. For less predictable environments or competition, the pad takes a second to remove.

This is the most industrial-feeling of all the slings presented. T3 Gear promises the webbing becomes more pliable with use. So far, I’ve covered six miles of carry and a few range hours with this sling, and by all indications, it’s going to stay freight train-tough. Its usual home will probably be my beloved Molot VEPR FM-AK 47; another product built to last.

After gingerly cutting about a foot of total length from the T3 sling, the excess strappage is manageable. There’s plenty of material on this one for just about anyone.
It should be noted that, although the T3 website shows thread-through ends, the company assures me this sling comes with the outstanding squeeze clips. T3 Gear does a great job of providing color options, including some for the camo fans. This $44.57, tough-as-nails sling is available in six colors. 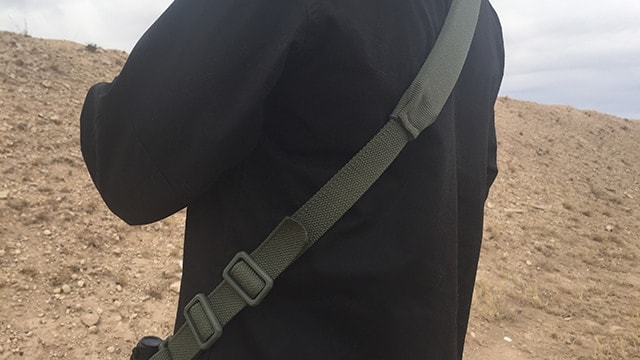 Blue Force Gear Vickers Sling
In partnership with former Delta operator Larry Vickers, Blue Force Gear developed one of the first quick-adjust slings on the market, the basic Vickers Combat Applications sling. In a similar manner to which Magpul has cranked out updated versions of its MS3, Blue Force Gear has built on the platform of this sling to build a veritable army of variants—10 at last count. Instead of aggregating customer input to create a sort of democratic set of features, Blue Force went all-in with personal choice, offering both a padded and non-padded version of its custom sling. The custom padded one is featured here.

It takes pre-meditation to order one of these custom slings. First there’s choosing from 11 colors for the front layer of 1.25-inch nylon webbing and 2-inch foam-padded tubing. The back layer gets a separate color choice, as does the pull tab that allows the user to grab and adjust the sling. If there’s any criticism here, the pull tab is probably the least gross-motor friendly of the three featured slings. 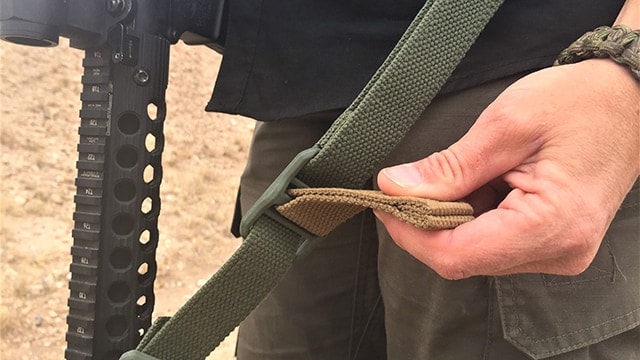 Decision-making continues with hardware, front and back. Even the pickiest shopper should find something to love among 15 choices. Only one doesn’t add to the cost, that’s a plain end that must be threaded through a traditional, polymer slider. Such is the hardware on our sample. Hardware comes in a choice of eight colors. As if that weren’t enough, there’s one more choice to make—sewn-in or threaded-on hardware. The custom sling starts at $60 and could cost up to $138 with the most expensive hardware. This sling’s king-of-the-mountain status and Blue Force Gear’s good reputation for fast production surely back up the higher price point. 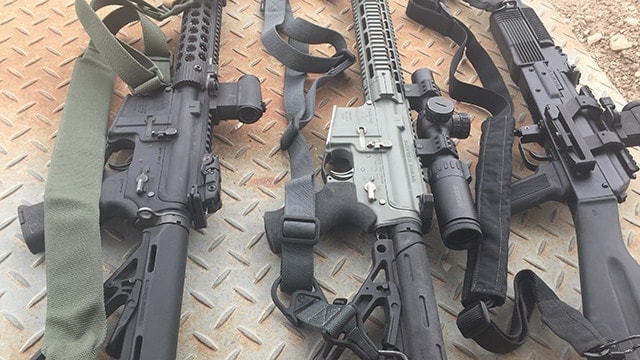 All of these slings are US-made by veteran-associated companies. (Photo: Eve Flanigan)

If you can only pick one
Folks looking for one-to-two-point flexibility have one choice here—the Magpul MS3 Gen 2. If heavy-duty toughness for any condition is what you need, the T3 Gear is the clear winner. For hard-to-please shooters who know exactly what they want or those looking for the most battle-tested sling, Blue Force Gear’s custom Vickers models are the next best thing to DIY. All of these slings are US-made by veteran-associated companies. All offer direct sales, which is recommended as counterfeits of some brands aren’t uncommon.