I’m fortunate to live in a corner of the world where “run and gun” competitions are cropping up in increasing numbers.  Although I can only do a couple per year, these five-to-seven mile, rifle/pistol biathlons have become a major motivator for me to stay fit and to stay on top of my carbine game.

These events, and the miles and time logged in preparation, are also a superb venue for putting gear to the test.  There’s no sedate bench shooting at a run and gun.  There is challenging terrain, either dust or mud, sweat, and sometimes, blood.  Equipment is battered by the strain of miles of jogging and the inevitable banging of rig-on-gun that happens over these miles. It’s a rare competitor who’s not taken a spill on the rocks, lost their footing on a steep hill, or been caught by an unseen piece of fence left from a long-past generation of ranchers. 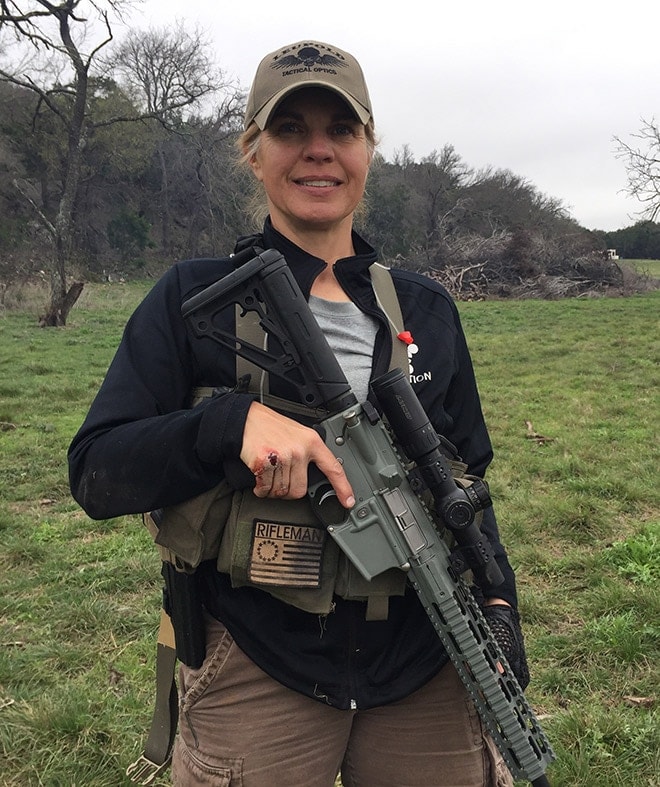 Post-race, relieved and pleased to have finished. (Photo: Team HB)

March 2017 marked my second outing at the run and gun hosted by Rio Bonito Ranch in Junction, Texas (check out my first here). My preparation, in my estimation, had been inadequate. Cold temps in February kept my battered knees creaky, so much that I’d mostly foregone running for tamer living-room exercise.  High winds, day after day, challenged my confidence about whether it was the windage dial of my scope or the Kentucky windage of my hold that was correct—but thankfully, more hits were on target than not.  I began to question the wisdom of signing up for an early spring event. The pre-event excitement that’s usually part of the fun started to feel more like dread.

Of course, the calendar cares not for my disdain of chilly temps.  The weekend rolled around, and Sunday morning, my run day, dawned with a heavy mist and 42 degrees on the thermometer.

I was thankful to hear the starter say “go,” knowing as I took off with my carbine and gear that my teeth would soon stop chattering.  My mesh-top shoes were already damp from the grass.

At what felt like just half a mile into the five-mile course, Station 1 presented itself. The challenge entailed making sure some part of my rifle rested inside a tire, suspended from chains, and low, requiring a lowered shooting position.

It turns out, a hanging tire is not a stable platform.  I’d get on a roll, hit a few targets, and then begin missing when a change of orientation was required. The tire seemed to mock my efforts with rubbery vibrations. I was a few hits short of completing the exercise when the range officer said “time out,” meaning I’d hit the three-minute limit.

Off to Station 2 I jogged, using the time to convince myself to concentrate and do my best to salvage the rest of the course.  Station 2 was an all-pistol exercise, around and under barricades, strong-hand, support-hand. No problem. In my worn Canik TP9 SA was a new brand of fuel, LAX Ammunition. No surprise, it’s manufactured in Los Angeles.  This new company provided samples of their 380, 9mm, and 45 ACP to test out.

The Canik cycled this factory new, brass cased, 115 grain full metal jacket 9mm in fine fashion.  In fact, at a later station, the range officer was advising 9mm shooters to aim high on the plate rack, as some were failing to knock down the plates.  I chose to aim center, and the LAX knocked down those, and all other moving steel targets, throughout the competition. This new brand is competitively priced for high-quality FMJ at $10.25 per 50 on the LAX website. 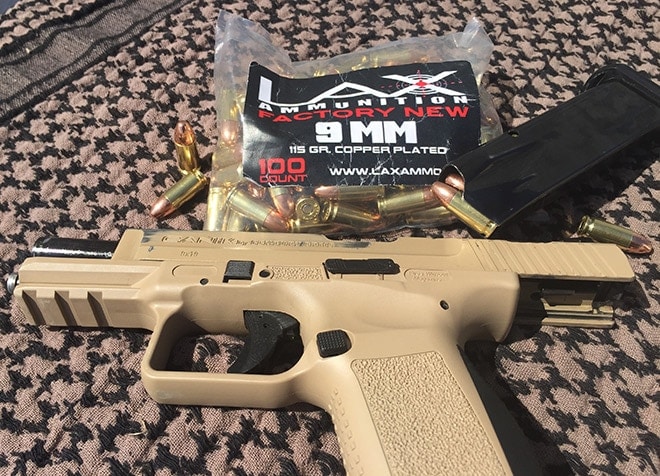 Following Station 2 was some rough going across country. The course followed a creek bed, lined with small boulders that made walking feel like the only safe option.

Relief from that footing was a steep uphill climb on a hill covered by small trees, rocks, and deep, loose dirt.  The angle of the climb was so acute that I moved the carbine from its usual travel position across my chest, shouldering it muzzle-up so as to prevent clogging the barrel with dirt.

Damp dirt began sifting its way into my shoes through the mesh tops. Someday I’ll do a run and gun in boots—someday. My hat’s off to military personnel who hike in them every day. 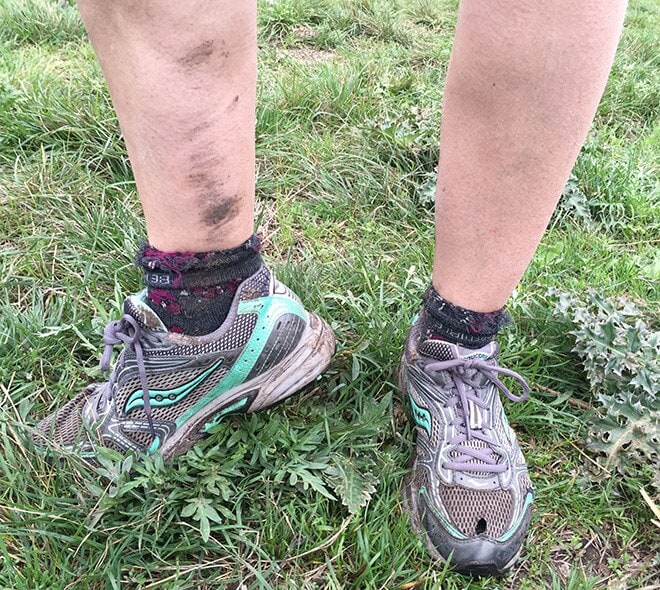 The unpleasant thought of shoes full of dirt was offset by the welcome sensation of wearing really good, cushioned socks.  The adventure footwear specialists Hi-Tec Socks supplied a pair of their over-the-ankle performance hiking socks, made of a thick merino/acrylic blend.  They have all the features of upscale athletic socks, like arch support, breathability, reinforced heel and toe, and a snug cuff. This little bit of luxury kept me from feeling sorry for myself as I heaved up the grade.

Now, it should be noted that these socks weren’t really made for running.  They’re labeled for “performance hiking,” and their charcoal grey, over-the-ankle, floral-trimmed design was definitely not a fashionable choice with running shoes, shorts, and winter-white skin.  I’d compromised by cuffing them to hide most of the problem, and in the process made a discovery that brought a smile to my face. 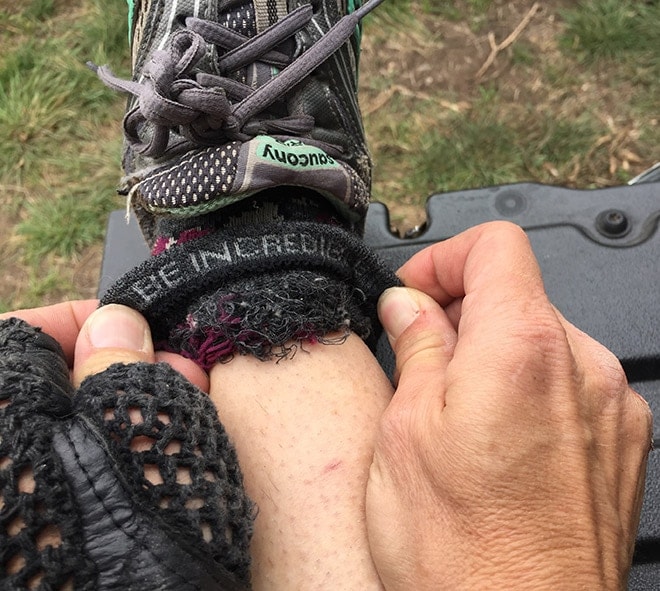 Hi-Tec Socks has apparently decided we womenfolk need some encouragement.  Inside the cuff, so discreet I’d have missed it had I not committed the fashion crime of rolling my socks down, two words are embroidered: BE INCREDIBLE. Being one of very few people running in shorts in 42 degrees, my credibility may well be in question, but the little discovery had lent my heart a little warmth as I got ready for the run. As I finally topped the hill, the saying came back to mind.  It occurred to me that even if my performance was less than incredible, the experience of doing any run and gun really embodies the word.

Good socks are a shortcut to better quality of life, especially when they’re reasonably priced at around $14 for a two-pair pack. The specific ones I wore won’t be on the market until fall 2017.

Despite the struggles I had with that shaky tire, I managed to pleasantly surprise myself at a later rifle station that had given me trouble last fall, ringing all the steel and being back afoot and on the trail with time to spare.  After years of struggle to find a magnifying optic that wasn’t too bulky yet has sufficient magnification for my less-than-perfect vision the Lucid L7 rifle scope came into my life. This 20-ounce, second focal plane scope has 1-6x zoom and a trim 24mm objective lens.  The reticle is simple and makes targets both far and near easy to acquire, using holdovers or not. Its locking turrets allow me to set zero at actual “0” on the windage and elevation dials, making it easy to tell if I’ve forgotten to return to home base after an adjustment. 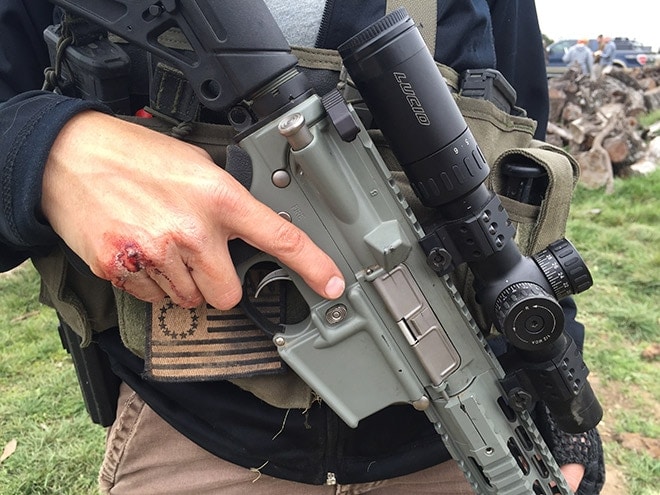 The high performing Lucid L7 scope had a little token blood in it before the finish. (Photo: Team HB)

Rio marks my second run and gun with the Lucid optic.  In the approximately ten months it’s been mine, this scope has traveled countless hours in 4WD vehicles over all kinds of roads, and it’s been on at least 30 miles of practice and competitive running.  It’s often repeatedly banged against the mags in my chest rig in rhythm with my strides—though that’s not my intent, it’s inevitable at times. It’s been exposed to freezing and 100-plus degree temps.  Although it’d be no shame to require re-zeroing after such use, the thing is still holding zero! For a $449 scope, it’s performing like one costing three times the price.  I can’t recommend the L7 highly enough. It truly is a luxury scope at a working person’s price.

By the end of the run, much as I enjoyed it, most of the LAX ammunition was gone.  I was glad to take the weight of my rifle, scope, and chest rig off and stretch.  And it felt really good to peel off the damp, but still cushy Hi-Tec socks in exchange for a dry pair.

The enthusiastic event organizers did far more than treat competitors to a great shooting experience.  They provided explosive fun in the form of literally blowing up a Chevy Suburban, with help from industry sponsors.  Guns.com’s media guy, Ben Phillipi, made a video of that very entertaining distraction, posted on this blog’s YouTube channel.

My middle-of-the-pack placing among nearly 100 competitors is definitely not incredible, but in comparison to past performances, and considering the lower degree of prep going in, I’m thrilled.  The satisfaction of having finished the event, regardless of the outcome, is always the best reward.