Trijicon’s 1-4×24 AccuPoint is the easiest scope I’ve ever used.  There is something about the AccuPoint’s clarity, and the simplicity of the pinpoint illuminated reticle that gives the scope the advantage over much of the competition.  There are very few manual controls.  There are no overly complicated bells or whistles, and nothing stands in the way of a clean, accurate shot.

The aluminum tube on the AccuPoint 1-4×24 is 30mm.  This mount is a Leupold, though Trijicon makes a similar one.  We had the Leupold in for another review, and in these strange times, when you can’t find a high 30mm scope mount in a retail store within 200 miles, you take what you can get.  At least I do. 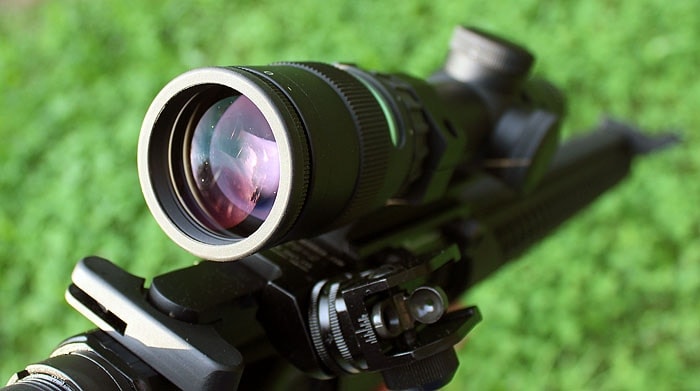 Trijicon’s multi-coated lenses don’t distort anything in the focal plane.  They are exceptionally clear.  And the long eye relief keeps your face off the back end of the scope.  While this is less of an issue with the 5.56, it can be a an asset on larger caliber rifles that tend to kick back (and bite hard). 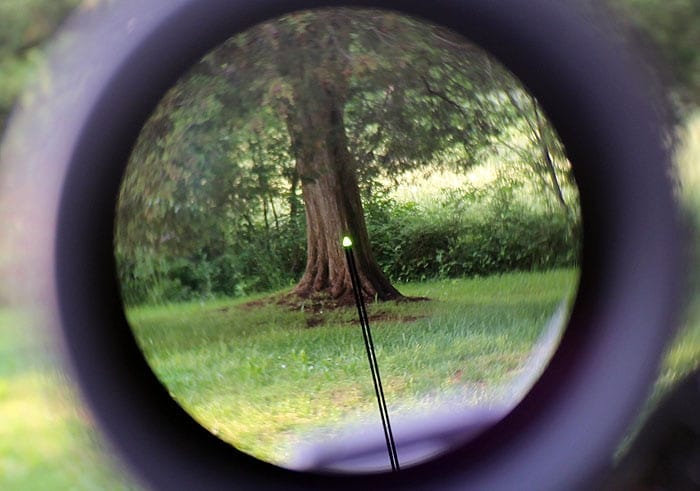 Trijicon’s second focal plane reticle means that the target gets bigger as the magnification increases, but the size of the reticle remains exactly the same.  And the bright triangle is only visible from the back of the scope.  As bright as the triangle is, it doesn’t put off any light from the front side of the scope.

The reticle is available in red, green or yellow.  This one is the yellow triangle reticle, but it is available in more traditional German crosshairs with an illuminated dot, and higher magnifications offer a standard mil-dot crosshair.

The triangle reticle is missing the typical graduated markings used to gauge windage and elevation.  But out to 100 yards, there is no need.  And at longer distances, the reticle functions like old fashioned iron sights.  To say the scope is fast would be a bit of an understatement.  The only type of optic that I have used that’s faster is the Trijicon RMR.  But this scope, with its traditional tube and eye piece, still offers reflex fast target acquisition.

It even comes with clear lens caps.  They allow for protection of the glass and immediate use, even when they’re on. 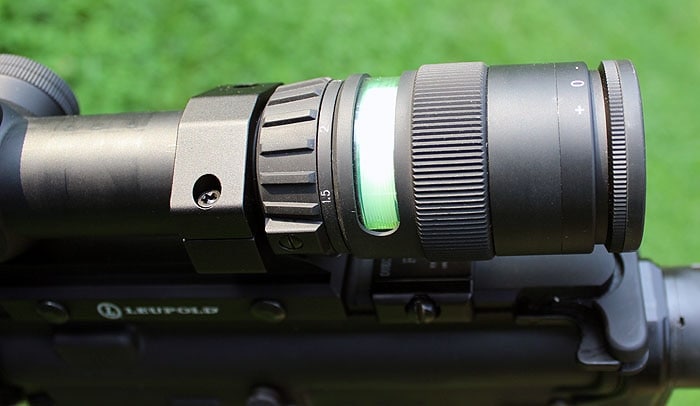 Trijicon’s battery free illumination makes use of fiber optics and a tritium phosphor lamp.  A rotating sleeve above the fiber optics allows for the brightness level to be adjusted.  The brightness sleeve is tight, and requires a intentional movement.  The magnification ring is much more fluid and can be easily adjusted without taking your eye from the target. 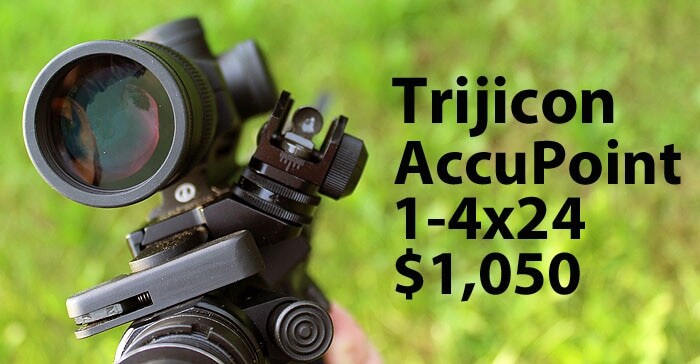 We’ve run several scopes on the Stag 3G in the past six months, and this is far and above the best.  It is also the most expensive we’ve featured to date.  The MSRP of $1,050 puts the AccuPoint out of most of our price ranges.  Is it worth the extra money for the extra clarity and the deceptively simple features and controls?  Of course it is.  Especially if you’re competing.

We’re getting close to a perfect competition gun with the 3G.  The Stag 3G is exceptionally accurate. The Trijicon AccuPoint helps shooters realize the 3G’s potential.  A set of Dueck Defense angled iron sights from SureFire will take care of anything really close.  Now if only we had a 3 gun course to run it on….