All of the recent talk of North Korea, and potential black-rifle bans has really shifted focus off of one of my favorite gun conversations: basic bug out preparation.  But the conversation is still worth having.  And in an attempt to get back to my Boy Scout roots, I’m taking another look at the Savage Model 42.  The gun is great, and a fundamental place to begin making plans for the unexpected.

The Savage Model 42 is a light polymer and steel .22LR over a .410.  The single shot functionality means it isn’t fast.  It doesn’t even eject shells automatically when the barrels are broken open.  You have to do everything.  But this means there are fewer parts to break.  In fact, I don’t think there are many parts on the gun that couldn’t be fixed easily in the field, which is what you want from a prepper gun.

The hammer is the only tricky part of the gun.  You move the barrel selector on the hammer to determine which round will fire, and if you forget to switch it, you will make some noise when you pull the trigger (but not as much noise as you’d like).

Allen makes some great gear for sporting guns.  Their Rifle Buttstock Holder is the perfect fit for .410 shells.  The elastic sleeve slips over the end of the buttstock and holds reasonably securely. There are 9 elastic loops, which hold .410 shells perfectly.  Not too tight that they won’t come out, but not loose enough that they’re going to bounce around and fall out.

This means you can mix and match .410.  A couple of slugs, some bird shot, some buckshot, a personal defense round or two.  This is the essence of preparation.  You can’t know what you’ll need.  Be prepared, and be organized.

On the Model 42, the rear sling swivel stud would be covered.  Not a problem.  A quick hot melt hole in the nylon of the shell holder, and the stud pokes through.  And then the sling acts as an anchor, which helps insure that the shell holder isn’t going to slide around.

The Rifle Buttstock Holder sells for as little as $7.

In what can only be described as a masterful example of branding wizardry, I will attempt to describe the sling.  I’m still not sure who makes it.  It is an Outdoor Connection Original Super Sling, but it is marketed as a Winchester product.  It isn’t glamorous, but it is sturdy.  The nylon strap is nice, and the mounts are robust. 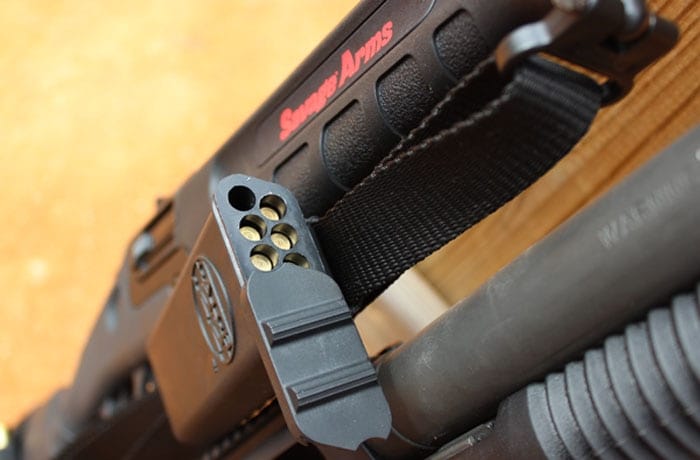 But we’ll leave its origins behind and look at the purpose.  A nice two point sling, especially one that’s as inexpensive as this one, will allow you to carry the Savage.  Without it, you have to stick it in a pack, or actually carry the thing.  I know this seems rather obvious, but I know too many people who claim to be prepared simply becasue they have a gun like the Model 42.  But without a strap you aren’t really ready.

This one is available everywhere, even Walmart, and sells somewhere around $20, depending on color.

We’re not talking classic Joseph Heller novels, or epic Allan Arkin films.  We’re speaking literally.  Marble Arms makes a lovely little ammo holder.  It is just small enough to fit in a jacket pocket, or on a belt.  And the lid is what makes it special.  This polymer ammo can slides open to reveal ten tubes.  Each tube can be emptied individually, and holds five rounds of .22LR. 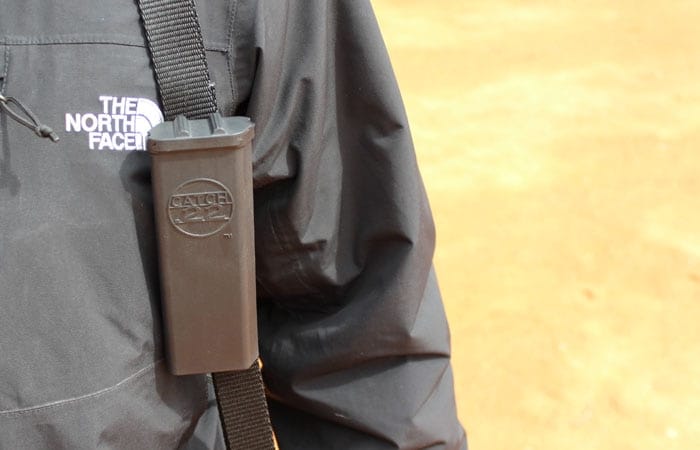 The selling point of the Marble’s Catch .22 is easy access and simplicity.  When the cap is closed, the ammunition is easily kept clean and dry.  The lid is so well thought out and intuitive, allowing just the right amount of rounds to fall out.  The belt clip on the back allows for the Catch .22 to clip easily onto a belt, or a bag, or the strap itself (if only for storage).

The crux of the biscuit

With the strap for carrying, and two easy and inexpensive means of storing ammo, the Savage becomes the kind of do-it-all gun that’s ideal for camping, plinking, or emergency bug outs. 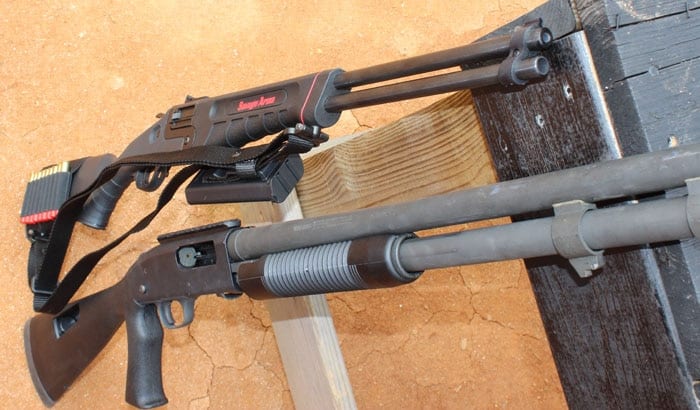 These three simple additions make the Model 42 a grab-and-go gun.  There will always be better guns for individual jobs, but those guns are typically not as versatile, light, or easy to feed.