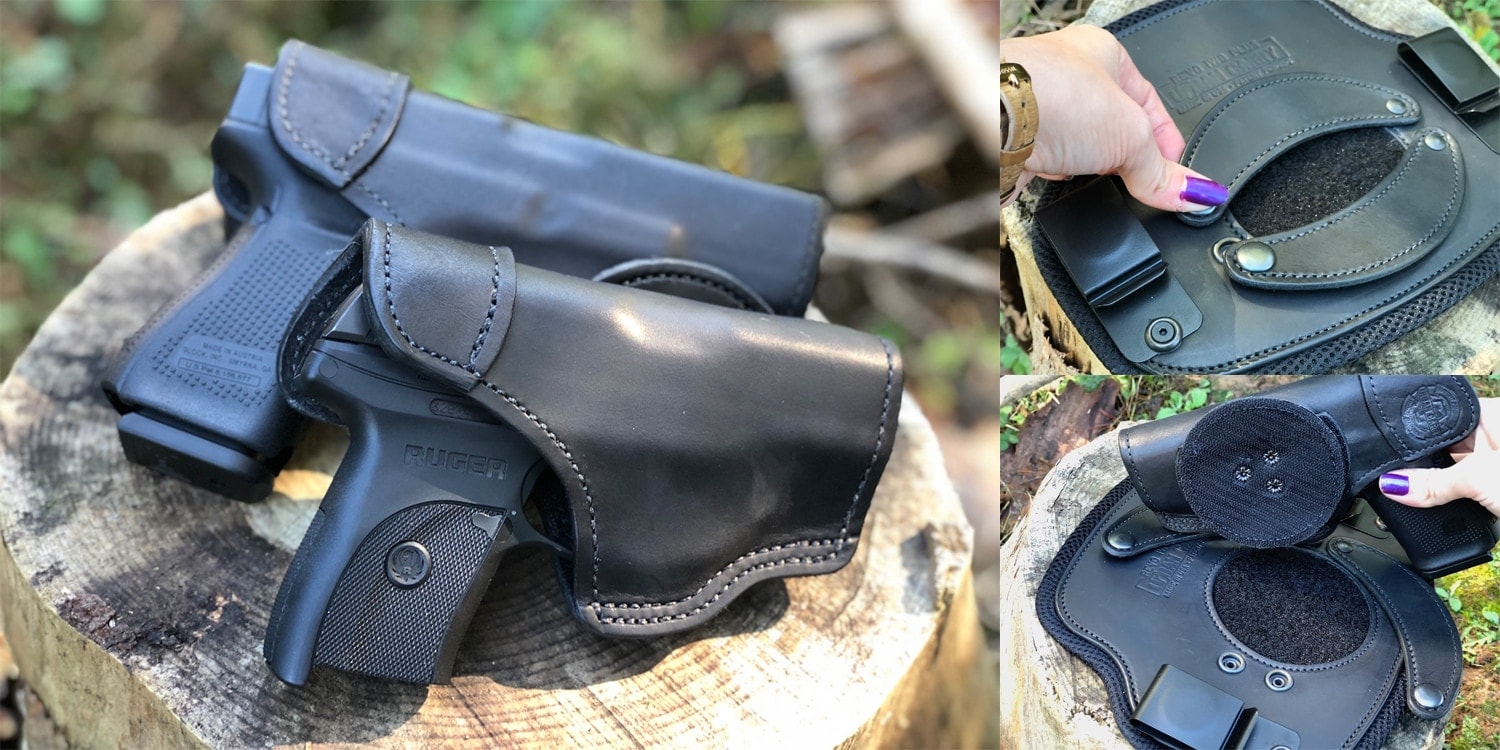 The IWB Plus, like all of the Revo’s rigs, features a hook-and-loop attachment point surrounded by leather flaps for added security. (Photo: Jacki Billings)

The concealed carry arena is constantly evolving as more companies aim to provide better options for consumers looking to pack heat. Urban Carry first injected themselves into the CC market with the deep concealment style holster, G1. The Florida-based company is now back with an all-new modular holster system, called the Revo, they say will revolutionize the way in which gun owners conceal.

Urban Carry invited a small group of media to the Revo’s unveiling in September, offering a sneak peek at the new design. Upon leaving, each outlet was sent home with a box of goodies for testing. Guns.com was fortunate enough to attend the event and get our hands on the new digs in order to determine whether the Revo lives up to its revolutionary name.

The Revo boasts a modular style design, employing the use of a base, or rig, that supports an array of holster shells. The rigs, constructed of high quality leather, feature a circular disc of hook-and-loop material by which the holster mounts to. The holster is then further secured by two flaps that fit around the shell and snap onto the base, theoretically preventing the holster from separating from the rig. Rigs come in a bevy of styles to include outside-the-waistband, inside-the-waistband, inside-the-waistband plus, appendix IWB, ankle, drop thigh and shoulder.

The aim of the system is to give wearers the ability to swap shells between multiple carry positions as well as easily swapping out shells for multiple guns. Instead of gun owners having to stock a holster for their Ruger, Smith & Wesson, Glock or Sig, Urban Carry Revo users can buy one set-up and multiple shells.

While the intent behind the system was well thought out, the Revo itself falls flat. The setup is unnecessarily complicated, especially given that there are well-made leather holsters already on the market that are no muss, no fuss. The flaps, which aim to add security to the overall rig build, are intrusive while the snaps that attach the flaps to the rig are almost impossible for me to use. Blame it on my small hands or lack of hand strength, but I found myself struggling every time to get those flaps snapped into place. It was frustrating and when holsters are frustrating, I tend to move on.

I will tip my hat at Urban Carry for the flawless leather construction. The leather is gorgeous and the shells did safely retain both my Ruger LC9s and Glock 19. The pros, unfortunately, stop there.

Is it a baby or a gun? Either way, we’re naming it Gaston. The AIWB took up the author’s entire abdomen. (Photo: Jacki Billings)

When I opened Urban Carry’s box I was immediately overwhelmed with the sheer options available in the Revo system. The company certainly thought of everything in regards to how consumers might carry. As I swam through a sea of holsters, I decided to focus my efforts on the most common ways in which I carry – strong-side IWB and AIWB.

I pulled the AIWB rig out first and set about attaching, under much duress, the Glock 19 Gen 5 shell. In everyday life, I am able to conceal the G19 easily my clothes alongside a StealthGear AIWB holster. I wanted to see how Urban Carry’s design stacked up.

In short, it didn’t. Upon seating the G19 into my waistband, I realized a pivotal point – the Revo is not designed for gun owners built like me. Clearly crafted around larger framed carriers or those that routinely strut around in oversized parkas and winter coats, those of us on the smaller end will find the Revo just doesn’t work.

The G19 protruded from my stomach unnaturally. If trickery was my M.O., I could easily claim the bulge from my mid-section was a baby, but, like most single women, I’m not keen on looking pregnant when it’s just a gun I’m carrying. The Revo is touted as giving wearers the freedom to position as needed, but for me there was simply no room to move. Like Midwestern teens in Red Dawn, my entire space experienced a hostile take-over that had me running for the hills. 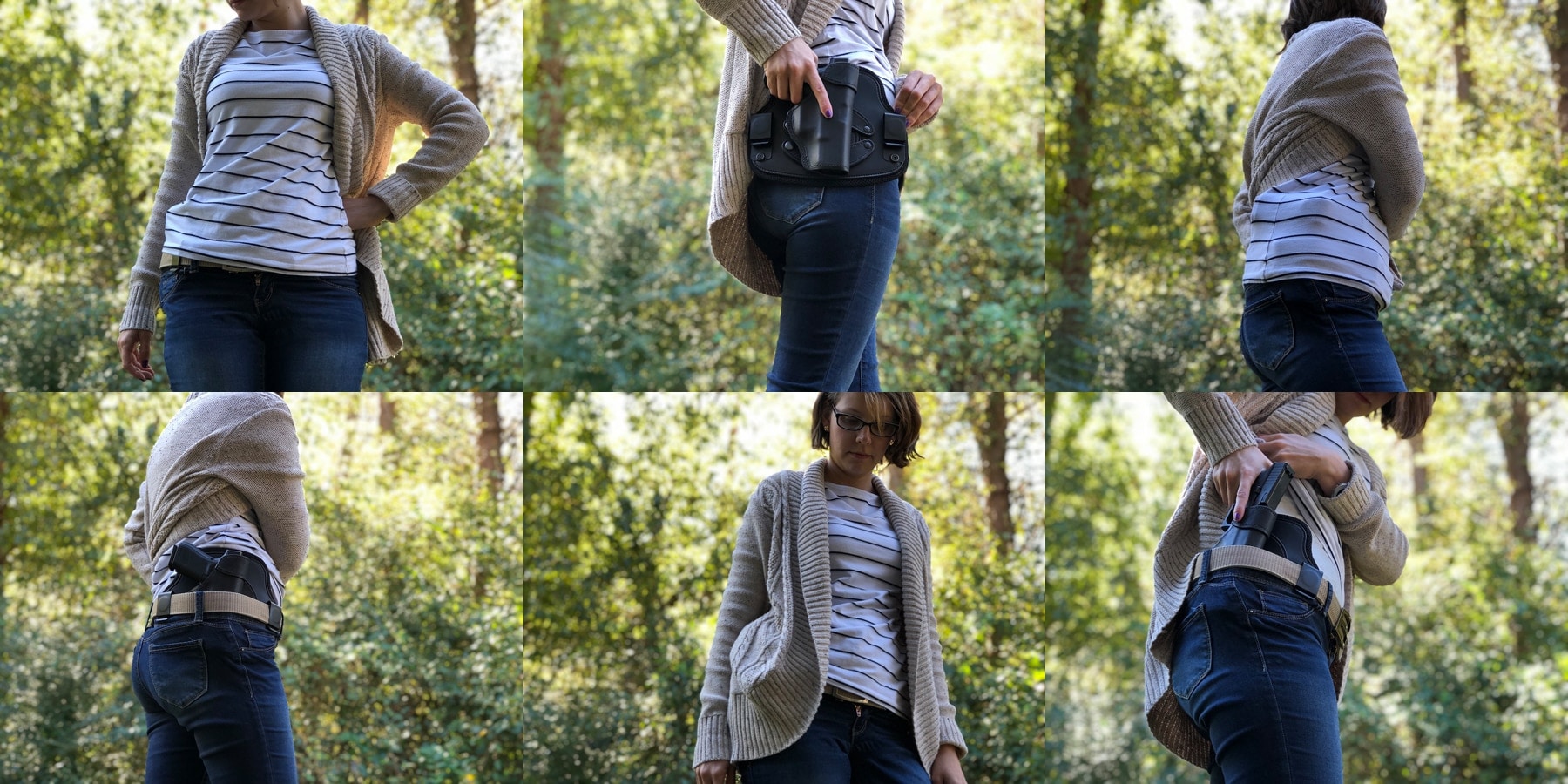 The IWB Plus with G19 in place is large, taking up a considerable amount of hip space and making concealment neither covert nor efficient. While the Revo is draped in cons, it’s a smooth draw. (Photo: Jacki Billings)

Disappointed and disturbed by my AIWB adventures, I moved on to the IWB rigs. Urban Carry included two in my package – a standard IWB and an IWB Plus. I decided to test out the IWB Plus first. As I pulled the leather beast from the box I reveled at just how large the rig was. Bigger than my head, I realized that like the AIWB, the IWB Plus would leave little room for adjustments. True to form, the IWB Plus was a flop. The large rig, worn alongside my favorite CC pants, was so rotund that it prevented me from zipping and even buttoning my trousers. There I was, with a grotesque “bulge” looming ominously from my hip and pants that were kept together only with my CC belt. This was certainly not going to work.

I tossed the IWB Plus off in frustration, grabbing for the standard IWB. This has got to work, I thought. I heaved a heavy sigh as I worked, again, to secure the snaps which seemed impossible to secure in place without the use of a hammer. This time around, I ditched the G19 in favor of the Ruger LC9s. I have concealed that gun in tight, form-fitting dresses so it had to be small enough to work in the Revo … or so I thought.

In truth, the Ruger concealed just as poorly as my G19. Again, I was stuck with a protrusion from my right side that made me look as if I needed to seek medical attention for the bulbous, tumor-like lump. 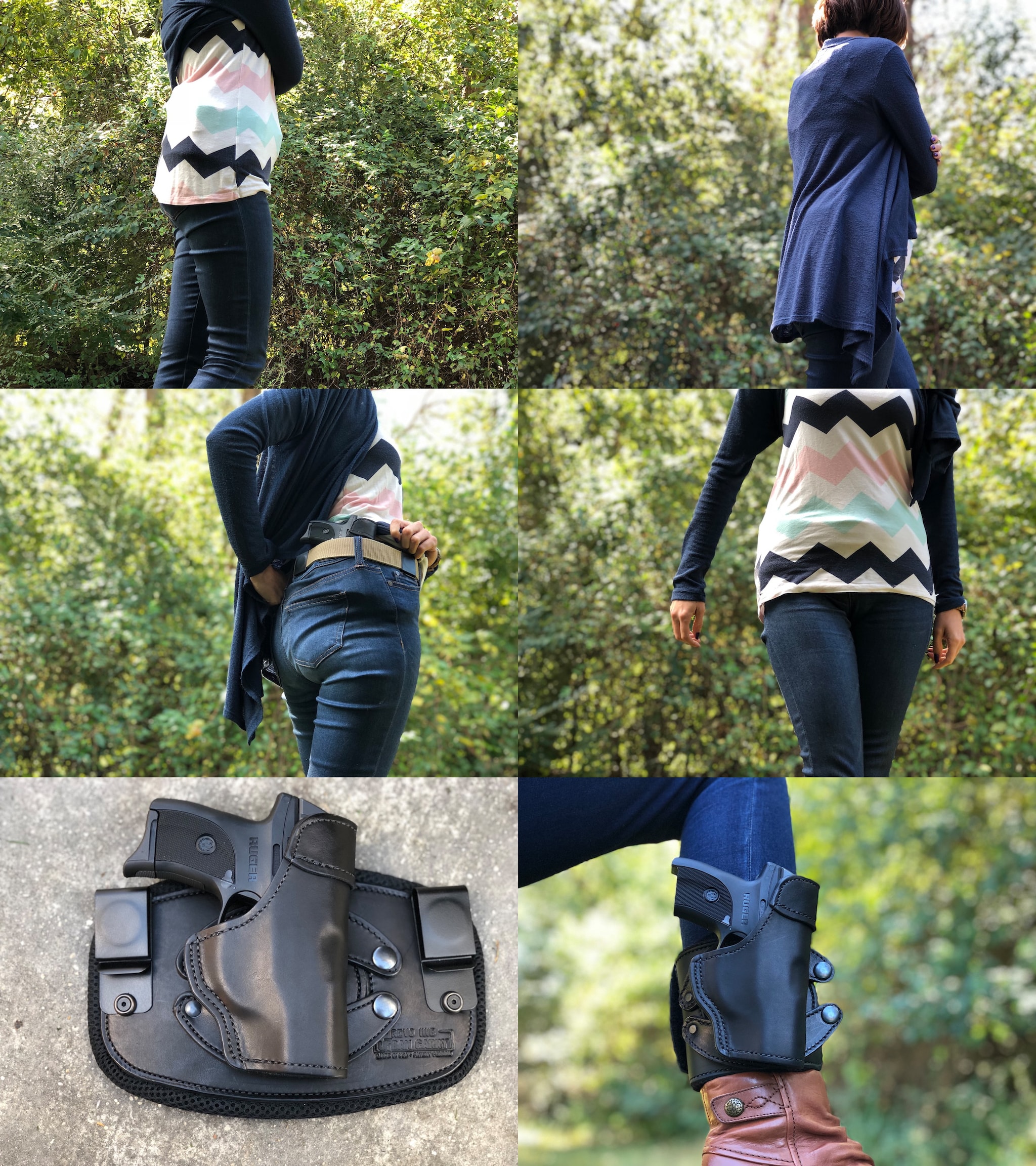 While the Ruger is smaller than the Glock, it’s just as obvious. Even when paired with a cardigan, the Revo sticks out like a sore thumb. (Photo: Jacki Billings)

After failed experiments with the IWBs and AIWB, I quickly perused the thigh, shoulder and ankle rigs. Neither the thigh and shoulder cinched down enough for me to even remotely consider them options. The ankle holster did fit, but again, was so bulky there’s no way I could carry it under anything less than a princess style ball gown from the 1700s, hoop skirt and all.

The only holster that seemed to remotely work is the outside-the-waistband – mainly due to the fact that it’s designed to see and be seen. In this case, concealment is off the table and wearers can proudly display their leather pride.

The Revo is a good idea in theory, but theories don’t always translate to real life. Unfortunately, such is the case for this holster system. Over-engineered and overly complicated, the Revo sets its sights high but clearly misses the mark. If you’re sporting a micro-warrior body like me, you’d do better to look elsewhere for your carry needs.