The Viridian C5L is small.  It was designed to fit under the barrel of subcompact pistols.  There’s not a lot of real-estate down there.  The C5L is so small that it looks a bit undersized on a Glock 19, but it isn’t.  While most lights will barely fit under the 19’s barrel, the C5L has extra room.

The housing on the C5L is made of aluminum.  The attachment points are polymer.  The C5L comes with multiple sizes, so it can be fitted exactly to almost any gun.  A simple knurled bolt secure the light to the rail.  Simply crank it down with a flat-head screwdriver and you’re good to go. 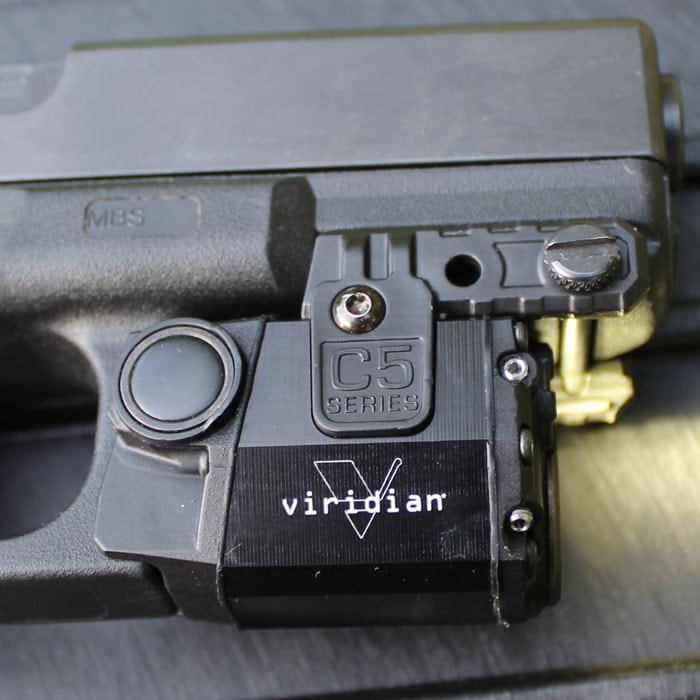 The C5L on a Glock 19. (Photo by David Higginbotham)

The light is small, but ample.  It shines at 100 lumens.  While that’s way below what some lights are putting out, it is sufficient.  Also, it may provide a bit of a tactical advantage, as it doesn’t announce your position like a beacon in front of a used car dealership.  The light functions in a simple on/off mode, but can be easily set to strobe.

The laser is really what sets the C5L apart.  The green is visible in the day time.  That’s no small accomplishment.  It is a 5-megawatt beam, which is surprisingly strong.  At close ranges, the laser is tiny, but very bright.  Farther away, it opens up a bit, but not as much as some of the lesser quality red lasers I’ve tested. 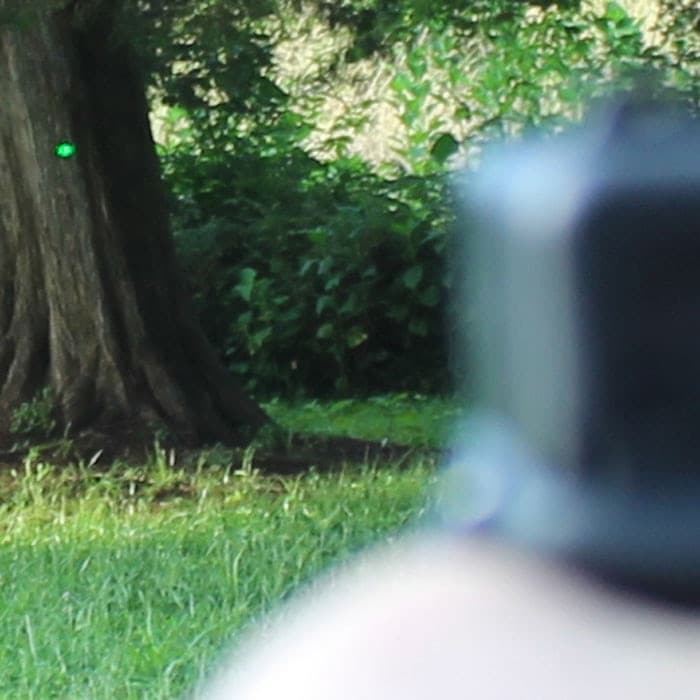 Daylight, with the laser on the tree. (Photo by David Higginbotham)

The controls are really amazing.  The C5L has push button operation that is ambidextrous.  Where your trigger finger falls during normal, safe handling of the gun is where you’ll find the button.  It is intuitive.  But the light can also be activated coming out of a specially designed holster.  Viridian calls the Enhanced Combat Readiness (ECR).  A very strong magnet flips the switch on when you pull the gun.  No fumbling around for the button in the heat of the moment.  We’ll have a review of two of these holsters, one from Viridian and one from Multi Holsters, up later this week.  Stay tuned for that.

The light works well.  There’s not much more to tell about it, honestly.  It either shines or it doesn’t, and the L on the C5L shines every time.  It doesn’t go dark when you fire the gun, as some do.  It simply works. 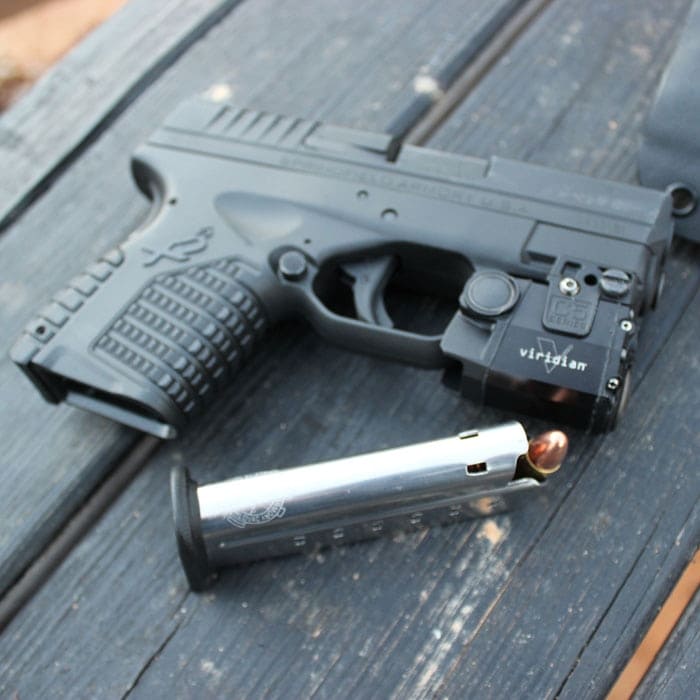 It looks larger on the XDS. (Photo by David Higginbotham)

The laser works well, also.  It can be hard to see, but only if you are facing into the sun and shining the laser on a green target.  Otherwise, day or night, the laser is a handy addition to any gun.  Viridian provides a key for sighting it in.  Simply find your preferred sight picture on a target about 7 yards away and dial in the laser to the predicted point of impact.  Pull the trigger, and see how close you are.

At night, this thing is a beast.  The laser is so bright that it could be used as a deterrent.  Do not look at it.  I’d suggest sighting it in on a non-reflective target.  We were shooting some steel plates with the laser engaged, and it was hard to keep your eyes on the target because of the wicked green glare. 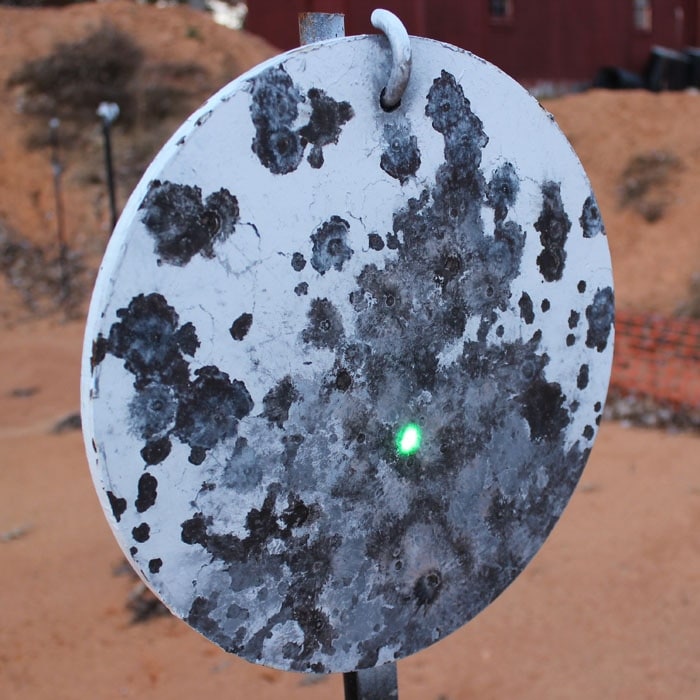 The laser on a steel plate from 7 yards. (Photo by David Higginbotham)

Battery life will eventually be an issue.  We picked this test unit up this summer and have been working it out occasionally ever since.  I can’t estimate how long we’ve had it on and we’ve been testing controls, putting it in different holsters, testing it on different guns, posing with it for photos, etc.  It has not completely died yet, though the light is beginning to dim.

But this isn’t a weapon light that’s meant to be deployed for hours on end.  It is for concealed carry.  It is supposed to run bright and fast, which I think is the defining philosophy of most concealed carry guns, too.

Other than that, the only thing I’d mention is (what we thought was a problem with) fit.  While the C5L snugged right up on the Glock, the polymer attachments looked stretched thin on the XDS.  With the bolt secured loosely, it wouldn’t fit into the holster.  We thought we might have to remove some material from the mounts to get it to size right.  Turns out we just needed to crank down the bolt.  Once there was adequate tension, it pulled everything into alignment. 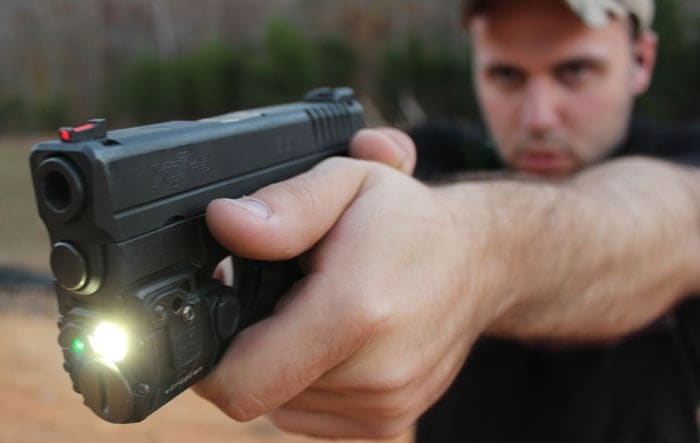 The C5L looks a lot more intimidating, especially in the dark. (Photo by David Higginbotham)

Why wouldn’t you want one of these?  I can’t think of a good reason.  Day or night use.  Instant on ECR technology.  The C5L really does seem to do it all, without making any compromises.  It is an investment, though.  At $349, the C5L is much more expensive than some of the lights on the market.  But that’s to be expected.  It is much more functional.  There is no other combination that does what this package does at this size.